1. The Like Gate Ban Changed Everything - and Nothing2. Like Gating Was Bad for Your Reach3. Qualifying Your Fans4. Introducing Your Brand5. Engaging With Your Fans6. Rewarding Fans with Coupons

1. The Like Gate Ban Changed Everything - and Nothing2. Like Gating Was Bad for Your Reach3. Qualifying Your Fans4. Introducing Your Brand5. Engaging With Your Fans6. Rewarding Fans with Coupons

Like gating – one of the top motivators for installing an app – was banned entirely. More than a few marketers began to doubt if promotions could deliver a strong return on the social network, and some have even been wondering if Facebook apps make any sense now at all now.

Those doubts were unfounded. Businesses and Facebook apps are still building value on the king of social media. You can still get likes of course, but there are more benefits to using apps than that.

Today, I’ll show you why Facebook apps are still an integral part of any Facebook marketing campaign.

Before November 5th of last year, you could require Facebook users to like your page before using your apps. It was called like gating and many brands did it, because it worked – as far as getting more fans, that is. If you can’t enter a contest unless you like a page, you’re have a stronger motivation to like that page.

Unsurprisingly, fan gains went down after the ban. And they went down hard.

But app usage rates didn’t. People are still using apps; they just don’t have to like pages now in order to do it.

Facebook apps are 1/4 of our Facebook Page Management software. We provide sample apps on our Facebook page for our prospects to test out live. Before the ban, we like gated our apps, too, so we could teach our customers and prospects how the feature worked. 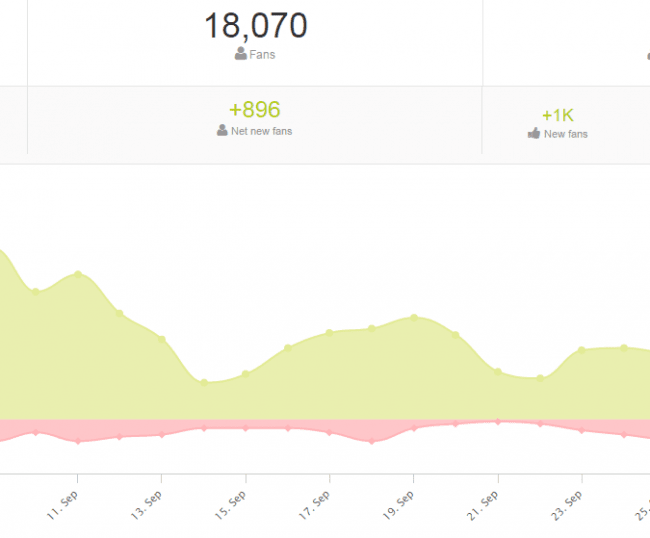 We averaged 1,000 new fans a month when like gating was legal.

After the ban, however, things didn’t work out quite as well.

Our monthly fan gains were almost cut in half. November only got us 655 likes. 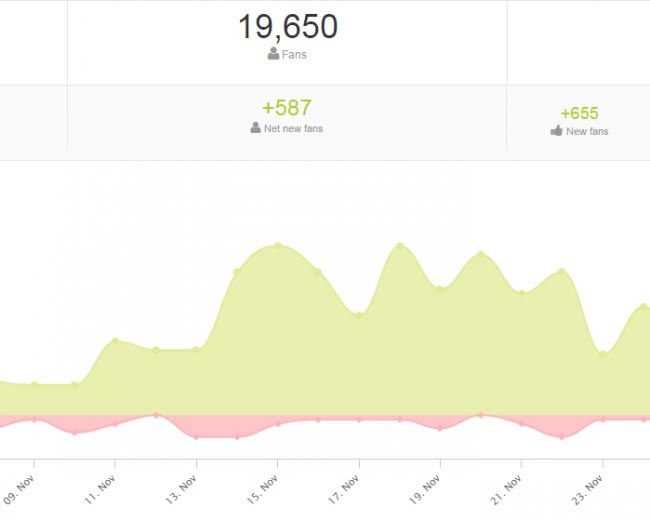 However, one thing has always remained true. The single most important factor that determines your reach on Facebook is the vitality of your fan base.

[Tweet “Post-like gate, your fans are really your fans.”]

Not that long ago, we all – Agorapulse included – used like gating to trap users and turn them into fans. If they wanted our prizes, they had to like our page. But the more low quality disinterested fans we got, the more they clicked the “hide” button when they saw our posts.

That wasn’t good for our organic reach, or yours.

Sometimes content was the reason.  Some businesses posts have always been too “salesy” for Facebook, but for the larger part many of us lost organic reach because a portion of our fans were never really fans in the first place. They were trapped into liking us by our contests and prizes.

We work with a major non-profit in France that posts good relevant content and has run quite a few apps but never like gated them. So, we benchmarked that page with our Facebook Page Barometer – it’s free! – to see how it was doing. The Barometer is a tool that shows the performance of your page – in metrics like engagement, organic reach, and viral reach – and compares it to industry averages. 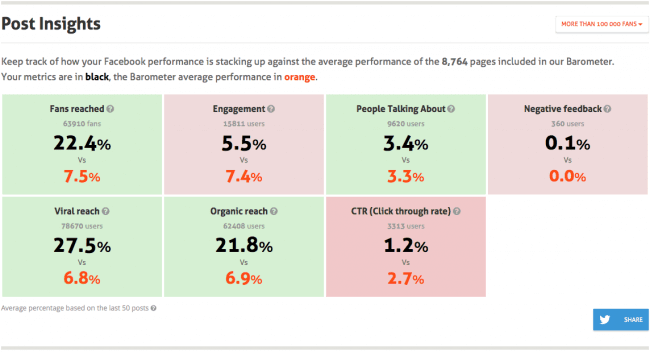 Take a look at their reach. It’s 21.8% percent – much higher than the average of 6.9%. This page is just one example of many that didn’t suffer the major drop in organic reach most pages did. Their content was good and relevant.  Their fans were truly their fans.

The false promises of Facebook marketing (broadcast our marketing message to the masses for FREE!) are dying a hard, hard death.  But the real promise remains.  You can build and nurture a community around your brand and still make the occasional sale with a great content strategy. And apps are still an essential part of that content strategy.

Now that you have good fans, what do you do with them?

Start by qualifying. When users participate in one of your app campaigns, you can ask them for buying preferences and personal data – like email addresses – in a user form. 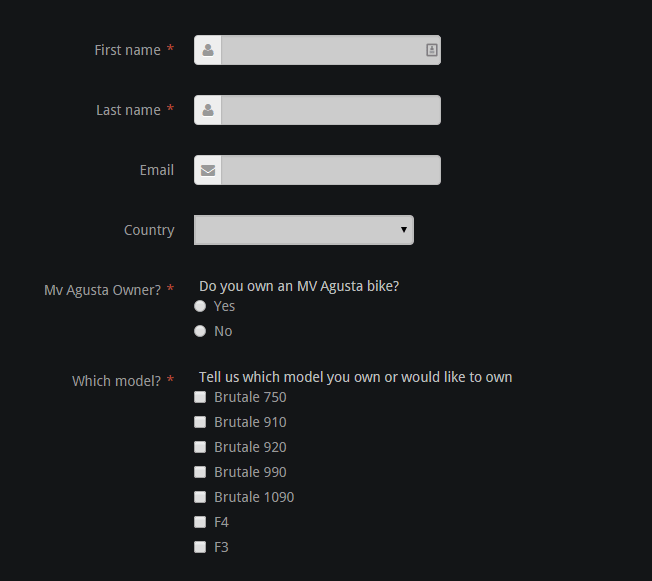 Figure out if your fans are also customers with a field like the “Mv Agusta Owner?” one above.

It’s an easy way to build your Facebook CRM suite, so you can identify qualified fans like this: 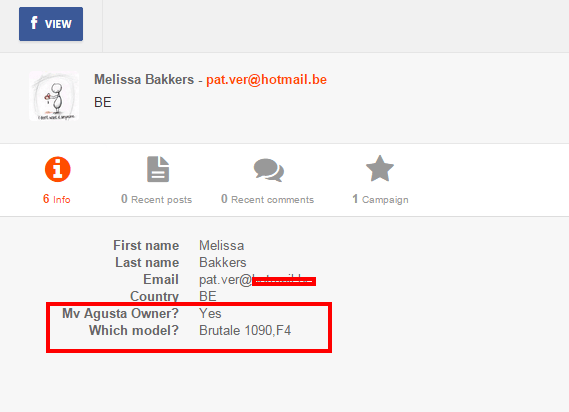 You can build customer profiles in a Facebook CRM with the data you get from your apps.

[Tweet “Take the user data you get from FB apps and build CRM customer profiles with it.”]

Apps for sweepstakes and instant win lotteries are perfect for introducing your brand to a new audience. They won’t get you as many fans as they did in the like gate era, but those fans will be sincere. They’ll actually be interested in your brand.

And don’t forget to track everything. You want to know which campaigns are giving you the most fans and where those fans are coming from, so you can optimize with confidence. 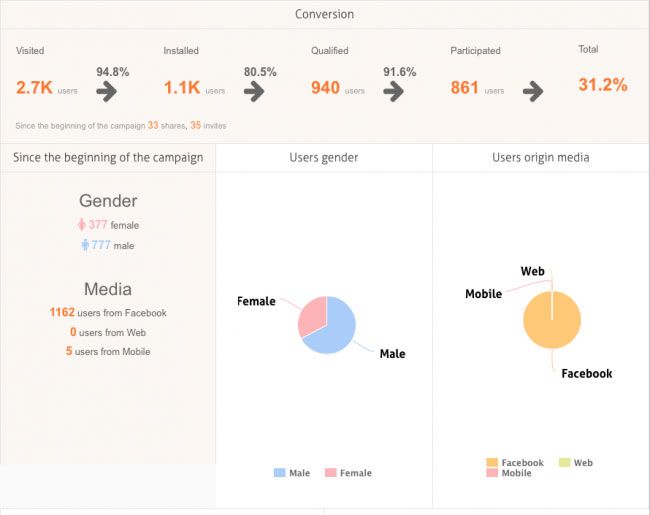 Pay attention to reporting. You want to know where your campaign is going, so you can adjust if you need to.

5. Engaging With Your Fans

You already know engagement is important. And contest apps are a proven way to get it. But depending on the industry you’re in and what your objectives and constraints are, some contests will work better than others.

Photo Contests: easy to set up, easy to manage, great for engaging your existing fan base, and Facebook’s Graph likes them; every vote contributes to virality. Your fans will want to talk about the pictures they took – it’s a personal and creative investment, after all. 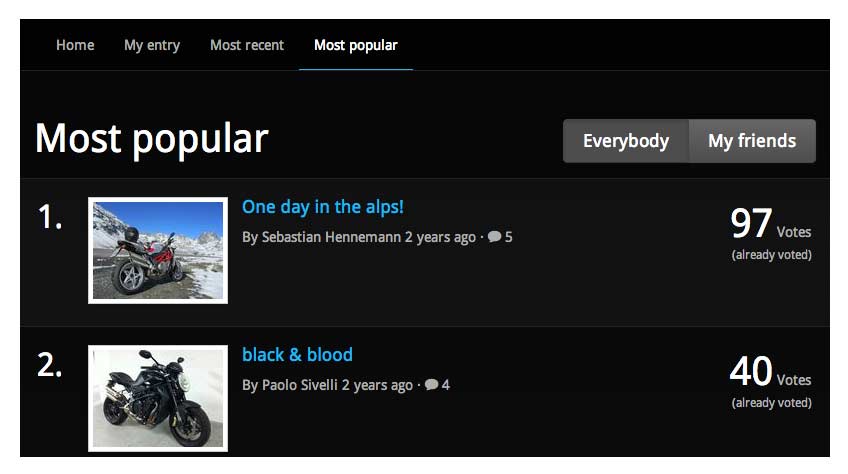 Submission moderation can take a bit of time, but it’s usually worth it.

Fan Vote Contests: exceptionally good at getting your current fans to engage, and they’re low maintenance as well. By asking users to vote on a business decision – which product model, color, branding, etc. will come next – you get free customer research and your fans get to contribute to creating their next purchase. 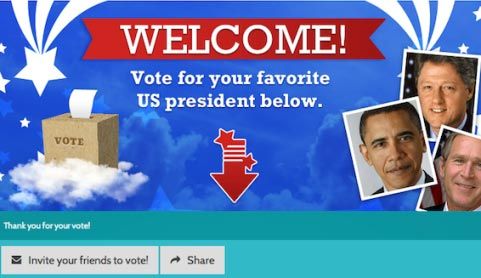 Make sure to prompt your entrants to invite their friends to vote, too.

Personality Tests: proven interaction drivers. Create a series of personality profiles, write some associated questions up, and then ask Facebook users to take the test to find out which personality they are. The potential for virality is high, as participants love to share their results with their friends. As a bonus, you’re not usually expected to offer prizes.  Fan Vote campaigns can be run just for the fun. 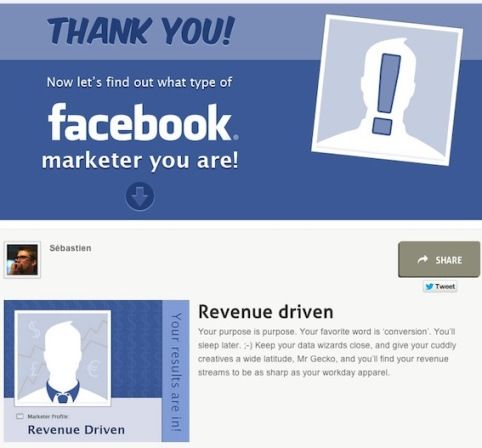 Quizzes: effective at drawing new fans in and getting page interactions from the ones you already have. They perform well in B2B audiences, too; just test their knowledge of the field they work in. You can award extra points if they recruit their friends, who may already be excited to take the test to begin with – having seen the original tester’s high score posted on her page. 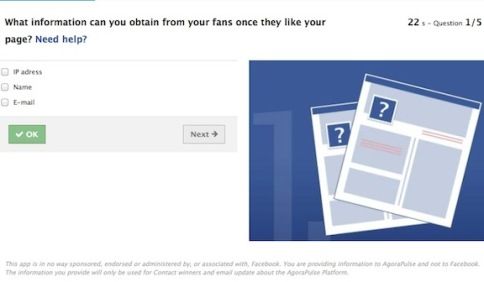 Encourage sharing by giving more points to users who pass the test on to their friends.

Be sure to watch out for your brand ambassadors as well. You’ll recognize them by how often they share and post about your contests.

Selling for less may seem counter-intuitive, but the data shows that coupons work.

Facebook coupons are no exception. Like discounts of all kinds, they encourage customers to buy. And when promoted through the newsfeed, they’re front and center, keeping your brand – and products – top-of-mind.

Be sure to do them right, though. Your Facebook coupons should have detailed information, attractive branding, and QR codes. You’ll want a way to get qualification data from your participants, too.

People can be dramatic when major change occurs, especially when changes occur on.

But the facts are what they’ve always been: true fans are what drives Facebook success. If you were only liked because you were running a contest, they probably hid your posts not long after and your organic reach suffered. They certainly didn’t engage meaningfully.

To get that quality engagement, you need to have a strong content strategy.

So, focus on the real fans. The ones that really like you. And make the most of them.