This is part of a series of blog posts that will be aimed at finding hidden statistical gems that are buried within Facebook Page Insights. This will be the first that focuses on the Insights export files.

I have some bad news: Not everyone appreciates your Facebook Page updates.

Even worse news: Some of those who have indicated that they “Like” you will actually hide your content and report you as spam.

It hurts, right? Now dust yourself off. It’s going to be okay.

You’re going to receive what Facebook defines as “Negative Feedback.” If you have any audience at all, this is unavoidable.

That said, you should monitor this activity to learn which types of content receive more negative feedback than others.

There are four main activities that are tracked by Facebook and fall within the definition of “Negative Feedback:”

Unfortunately, Facebook isn’t clear about either the definition of these terms or their importance when determining what users see. But I have a reasonably strong sense for what each one means.

X Button
This seems to be a carryover from when Facebook actually had an “X” button. This number is still being calculated, so my guess is that Facebook kept the old language even though it’s no longer representative of the action. The “X” button has now been replaced by an arrow that appears on hover to the right of the post.

When you click on that arrow, the hide options appear. It is my assumption that this click is what is calculated in the “Xbutton” column of Insights exports (I’ll get to that later).

From a user’s perspective, there are likely many incidental clicks on this arrow since its purpose is not clear. I have a hard time believing that this click makes much of an impact — if any — on whether users see your content in their News Feeds. I am going to hope it is included in Insights for informational purposes only.

Hide Clicks
When a user clicks the X button (or arrow), the second option available is “Hide.”

This action hides only the current story.

Hide All Clicks
Now, a user can also hide all future content in addition to the current story. After clicking the Hide link, a user will be presented with the following:

There is actually another way to hide all future posts from a particular source while viewing a post from the News Feed. Simply hover over the Page name, hover over Liked and then uncheck “Show in News Feed.” 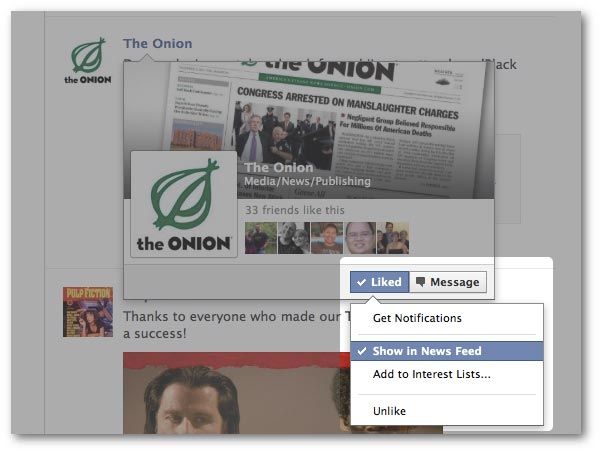 Your guess is as good as mine whether unchecking “Show in News Feed” applies to post level negative feedback, but I would consider it a good bet that it at least applies on the page level side.

Report Spam Clicks
Last, but not least, is the ability to report your Page as spam. I’m going to make an educated guess here and say that Facebook likely applies the greatest weight to this one. Hiding your posts because you’re boring is one thing. But reporting you for abuse should go to another level.

The final option after clicking the arrow is “Report Story or Spam.”

Whether you mark it as spam or report for abuse, these actions appear to fall into the same bucket. After clicking “Report Story or Spam” you will have the option of emphasizing just how much you hate the content, and why.

As you see here, users have the option of filing a report:

If that link is clicked, the user will be able to describe the details of why that link is abusive (violence or harmful behavior, spam or scam, hate speech or personal attack, sexually explicit content): 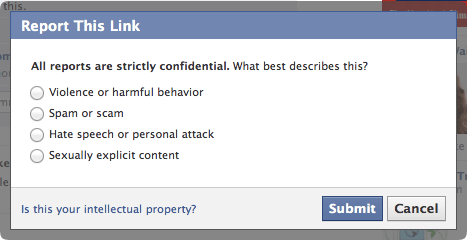 The main reason you should monitor negative feedback is that this data is part of the EdgeRank formula that determines whether a person will see your content in the News Feed.

“We made a relatively large ranking change in September that was designed to reduce spam complaints from users. We used [spam] reports at an aggregate level to find Pages or apps generating a lot of reports [and decrease their reach]. We’ve also added personalized attempts to reduce presence of posts you’re likely to complain about.”

It’s likely that not all “negative” reports are handled equally, but we don’t know precisely how Facebook views each one. We can make some guesses, though, that the order of severity could be as follows (from most to least harmful):

How to Find Your Negative Feedback

First, just a reminder that you can access Facebook Insights by clicking on the “See All” link within the Insights widget in your Admin Panel.

In the past, we’ve focused on the web version of Facebook Insights. This time, though, we are going to do a data export.

For the purpose of this article, let’s do a Post Level Export. This will produce a report focused on performance of each individual Facebook post created during the designated period. The Page Level Export applies to your Page in general. 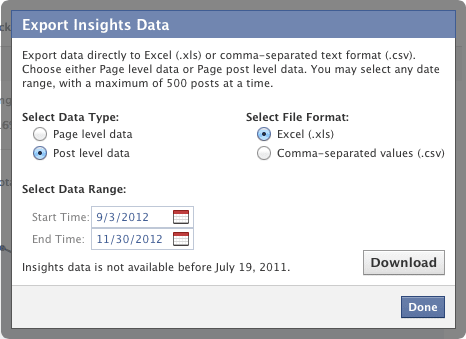 I like to select as much data as Facebook will allow. The web version only shows you up to 89 days, but you can export up to 500 lines of data (time period does not matter).

For whatever reason, Facebook can shoot you errors even when you don’t select over 500 lines. So while I do prefer to select five months or so of data, it doesn’t always work.

Great. You have your big, overwhelming, data-packed spreadsheet. Now what??

The first tab of your document is “Key Metrics.” This gives you a nice overview of your data, but lacks some of the details (believe it or not).

From the Data menu, select “Sort.” Then sort by “Lifetime Negative Feedback Users” in order of “Largest to Smallest.” Also check the box for “My list has headers.” 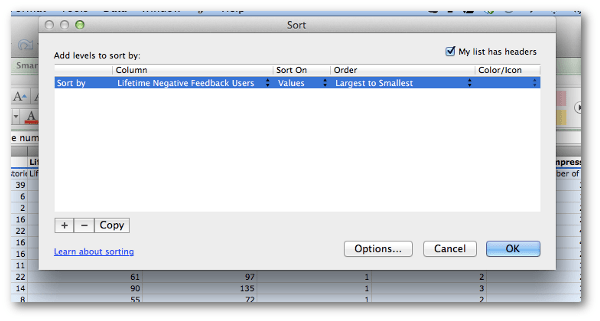 This will give you an ordered list of the posts that have attracted the most negative feedback by number of users.

Column C will show you the content you shared that generated this negative feedback. Feel free to expand this column to view more characters of each post.

To keep this in context, you should also be looking at any columns that would indicate you promoted the post. The more you promote a post, the more Fans and non-Fans will see it, the higher likelihood for negative feedback. You can use Column J (Lifetime Post Paid Reach) as a way to track what was and wasn’t promoted.

For me, the top three posts received negative feedback from 19, 10 and eight users respectively. All three of these posts were promoted. They were not only promoted, but two were regarding a contest and one a new product. In each case, negative feedback should be expected.

The rest of my posts, other than one, received negative feedback from four or fewer users. The remaining post was a status update that announced I had received the ability to “Get Notifications.”

Why were six people turned off by this? I didn’t ask people to get notifications from my Page, but I guess it’s possible the mere mention of the feature could have annoyed some. I also recognize that my Reach was rather high for this post, so in relative terms six really isn’t a significant number.

Now, here’s the problem with that number reported above: It includes ALL negative feedback. Remember when I discussed how Facebook tracks simply clicking on the X Button (arrow)? Yeah, that’s included.

As a result, we really need more information before we can determine whether there is any reason for concern.

There are several tabs to this document. Let’s now dive into the second to last tab, which includes “Lifetime The number of people who have given negative feedback to your post, by type. (Unique Users).”

From here, you’ll be able to separate the types of negative feedback by number of users. The columns are as follows:

It should be pretty clear what each of these mean now. You can feel free to sort by each column (I through L). But if I were you, I’d focus mainly on “hide_all_clicks” and “report_spam_clicks.”

For me, no post received more than two “hide_all_clicks” or one “report_spam_clicks.” Both of the posts that received clicks to hide all were in the results above and were promoted.

In other words: Nothing here is of significant concern.

I won’t go into all of the details of this since the directions are so similar to what I explained above for Negative Feedback for Unique Users. Just know that you can also view the total number of times negative feedback has been given. In other words, the same user can give the same negative feedback to the same post multiple times.

Within the Key Metrics tab, this data is found in Column V. The details for this are found in the final tab, called “Lifetime The number of times people have given negative feedback to your post, by type. (Total Count).”

The numbers I see are higher here, but it’s also a good example of why you should instead focus on Unique Users. For example, I have a post that was reported as spam five times. Yet, that was done by the same person five times.

That’s one really angry person. Do I let that one person change my approach? No way.

Did you know that you can also view Facebook negative feedback data on AgoraPulse? It’s also much, much easier to digest.

Click any column twice to sort by most negative feedback.

Curious about how your negative feedback stacks up compared to other brands? Click here to check out the Facebook Page Barometer and click the button to “Benchmark Your Page.”  It’s totally free. 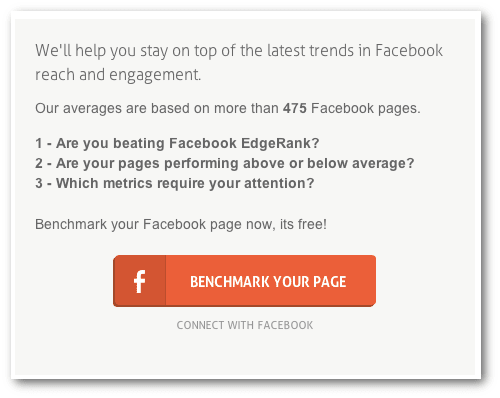 The Barometer compares all of your data to that of the other brands that have also benchmarked (over 9,000 as of this writing). Apparently, covering the time period benchmarked, I get a little less negative feedback than the average page. 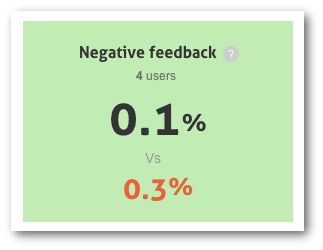 Is this a good thing? Sure, it’s not bad. But does it mean much? Well…

How Much Negative Feedback is Too Much?

I’d like to provide a black and white benchmark here, but I can’t. The truth is that no matter how great your content, the amount of negative feedback you receive will depend on many factors.

It depends on audience size. The more fans you have, the more likely you’ll have casual fans who aren’t that interested in your content. And if you have a huge audience, it’s more likely that the sharing of content from multiple people will annoy non-fans.

It depends on industry. Clearly, if you cover sensitive topics like politics or religion, you’re going to get some very passionate responses. That includes negative feedback.

It depends on promotion. Unfortunately, some Facebook users are marketing averse. They hate seeing any content in their News Feeds with the “Promote” label. This is especially true if you target friends of fans.

It depends on frequency. If you update too often, you’re likely to receive negative feedback. I’ve found very little impact when posting as often as three or four times per day, but if you do not adequately space out your content you are likely to annoy your audience.

That doesn’t mean that there isn’t a right answer, but the definition of “too much” Facebook negative feedback has to be determined by you. Take a look through your posts and determine a baseline of negative feedback. Observe which posts receive more and learn from it!

This article has been written by Jon Loomer. Jon is an awesome Facebook Marketing coach delivering unique and actionable Facebook marketing tips on his blog. Don’t miss his Blog and Newsletter: www.jonloomer.com