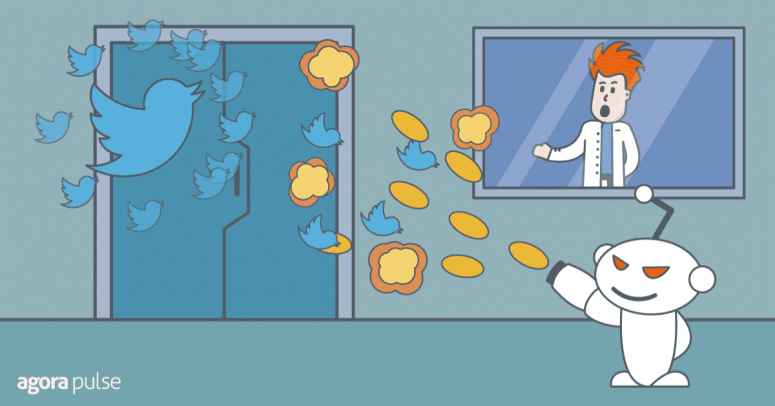 You might wonder, “Why should I advertise on Reddit?”  Most marketers have ignored the platform primarily known for trolls, memes, and conspiracy theories. 41% of Reddit users do all or almost all of their shopping online, compared to only 24% of those surveyed that are non-Reddit users, according to Civic Science.

Civic Science also found that Reddit users are twice as likely to pay attention to online social media ads, compared to those that don’t use Reddit.

In a previous Social Media Lab experiment, we found that Reddit ads had a much lower CPC than Facebook ads.

Reddit is also on pace to see a significant increase in ad revenue over the next year, perhaps due to more and more marketers realizing the power of Reddit Ads. 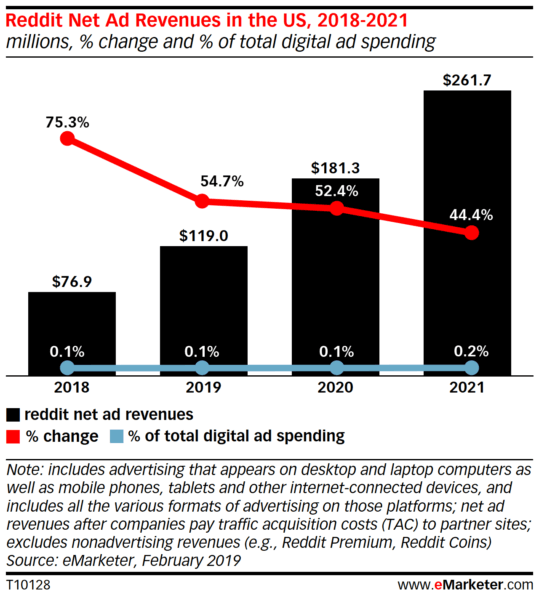 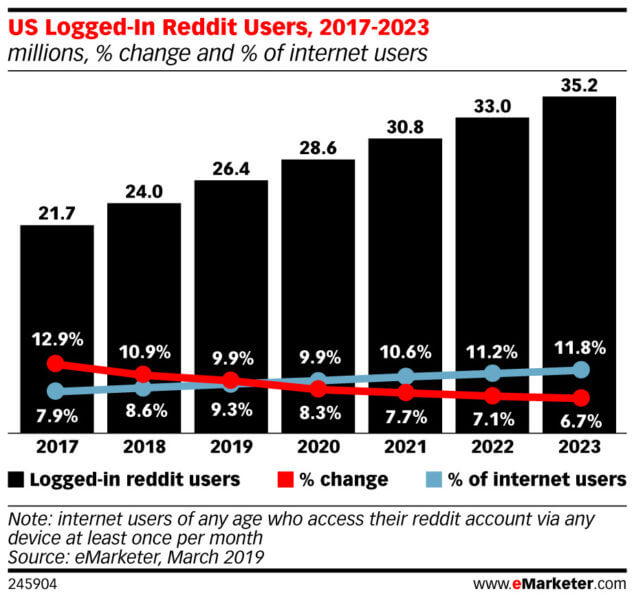 Twitter also saw a 21% increase in daily active users, which means more users to advertise at:

Twitter continues to be a great platform to drive traffic with ads.

Any broad findings on average Cost Per Click (CPC) need to be taken with a grain of salt; each product/ad is different. It’s never a good idea to compare your CPC to others. For example, a product that sells for $10 will have a different CPC than one that sells for $1000.

Comparing costs for the same product and ads, however, is a good idea. And it is what we are doing here and making a conclusion based on the percentage differences of CPC between Twitter ads and Reddit ads.

We haven’t found any experiments comparing Reddit ads to other platform ads except for our own tests.

Based on our previous testing of Reddit ads, here’s my hypothesis. 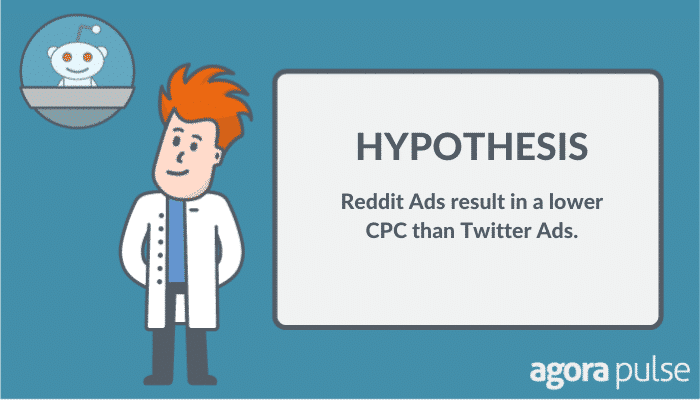 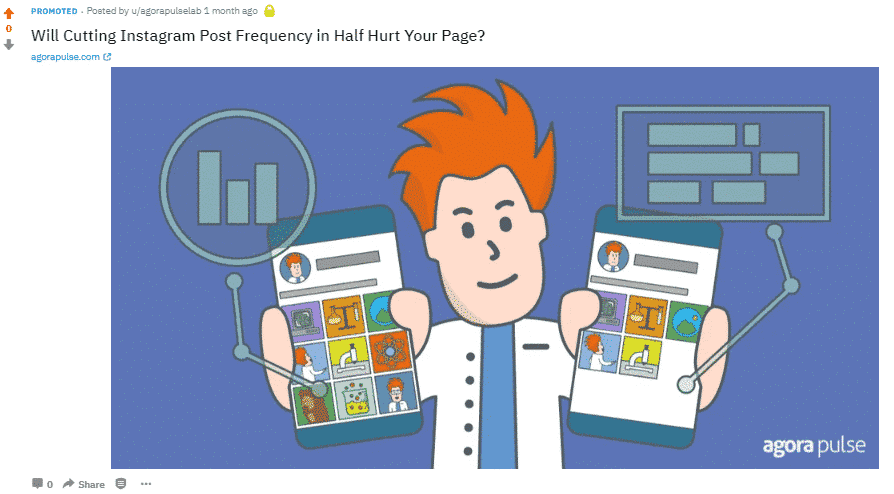 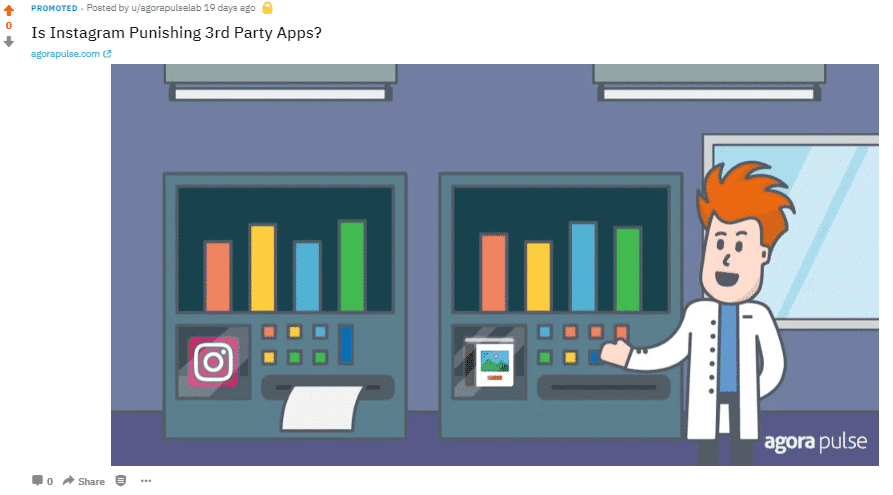 The format may look unfamiliar to you or perhaps missing something, but that’s just the nature of posts on Reddit. Short text update, photo, and a link. No title or description from the link is parsed as we see on other social media sites. 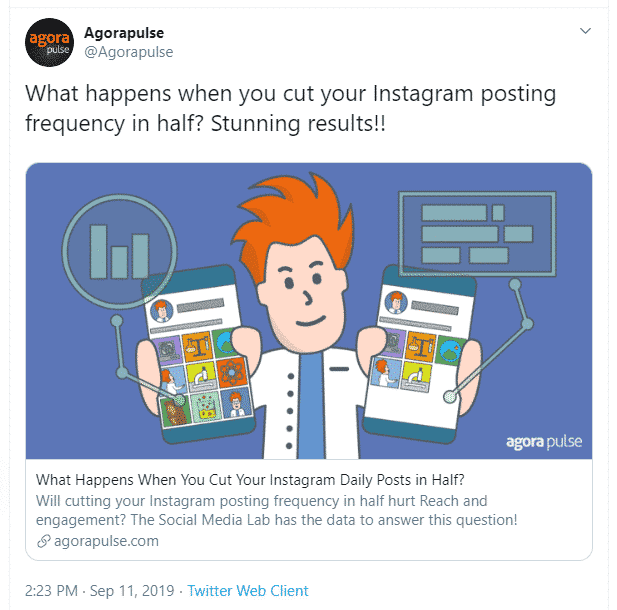 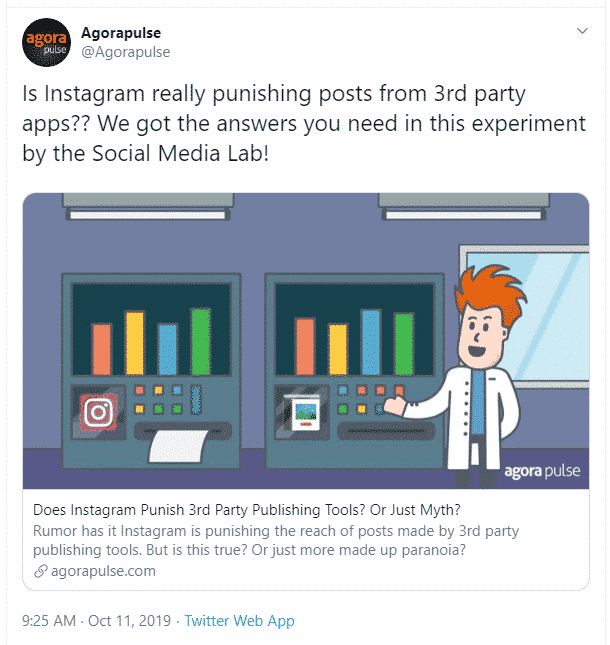 So while not 100% identical due to differences in the platform these ads are directing traffic to the same URLs using the same images.

Due to different targeting options, the target audience will not be exactly the same on Reddit and Twitter.

We will limit them to English language preference users and filter down to focus on the following countries/regions on both Reddit and Twitter:

We chose the following interests to target on Reddit:

This targeting option is turned on by default on Twitter ads with the objective of traffic. Basically, your ad is placed in lots of apps (primarily games) and users have to click the link in the ad to proceed to the next level or to unlock an app feature.

The Twitter Audience Platform is great if you are running ads for mobile app installs. However, it is horrible if you are driving traffic to a website or blog posts due to the users not being interested in your product.

For Twitter, the ad budget and spend were €550 (euros). We advertise in euros because our company, and Twitter account, are based in Paris. Conversion rates change often, but at the time of testing, this equals roughly $600 US dollars.

For each platform, we’ll look at the following metrics:

CPC is the metric we will base our conclusion on. The other numbers will help you have some perspective on the ads.

It’s obvious Reddit resulted in more than double the clicks, four times the impressions, and a much lower CPC.

In percentages, the differences are more revealing than the raw numbers: 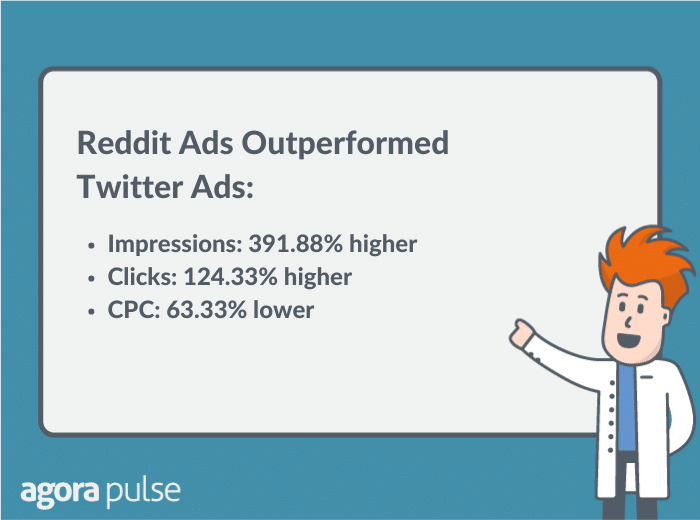 Reddit ads win this comparison between Twitter ads due to the much lower CPC in our experiment.

However, Twitter ads did have a much better Click Through Rate (CTR). Your CTR tells you the percentage of users who click on your ad after seeing it.

A high CTR signals your ad was appealing and properly targeted.

Check out the CTR of both ad sets:

The ads on Reddit needed to be seen twice as much in order to get as many clicks as Twitter.

I’m not shocked by this due to Reddit being a completely cold market, whereas Twitter was a warm market. Meaning those users we targeted on Twitter either followed us, had engaged with us, or were a look-alike audience.

Some marketers believe a higher CTR is always best, but for our test, we focused on CPC. And for this experiment, Reddit outperforms in every category. 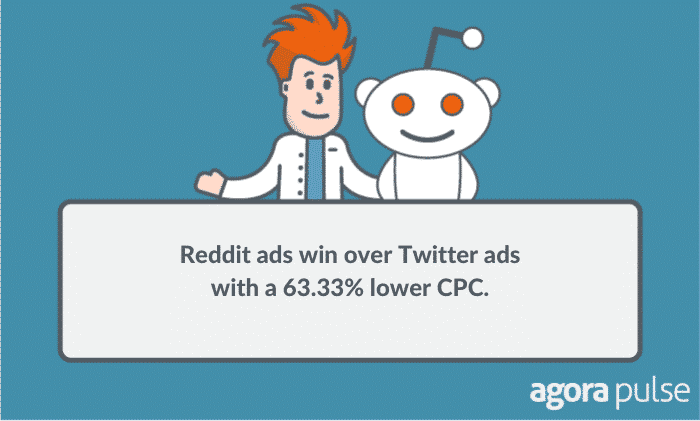 *After this test I have continued to run ads on Reddit every month, spending an additional $1,000. Through those ads, we are seeing on average a CPC of $0.28, with a CTR of 0.35%. We have improved the performance to a small degree by targeting better subreddits and interests within the “Business” and “Marketing” categories.

Reddit is a gold mine for driving traffic. The Social Media Lab recommends you start considering Reddit ads if you want to drive traffic to your site. (And don’t we all want that?) 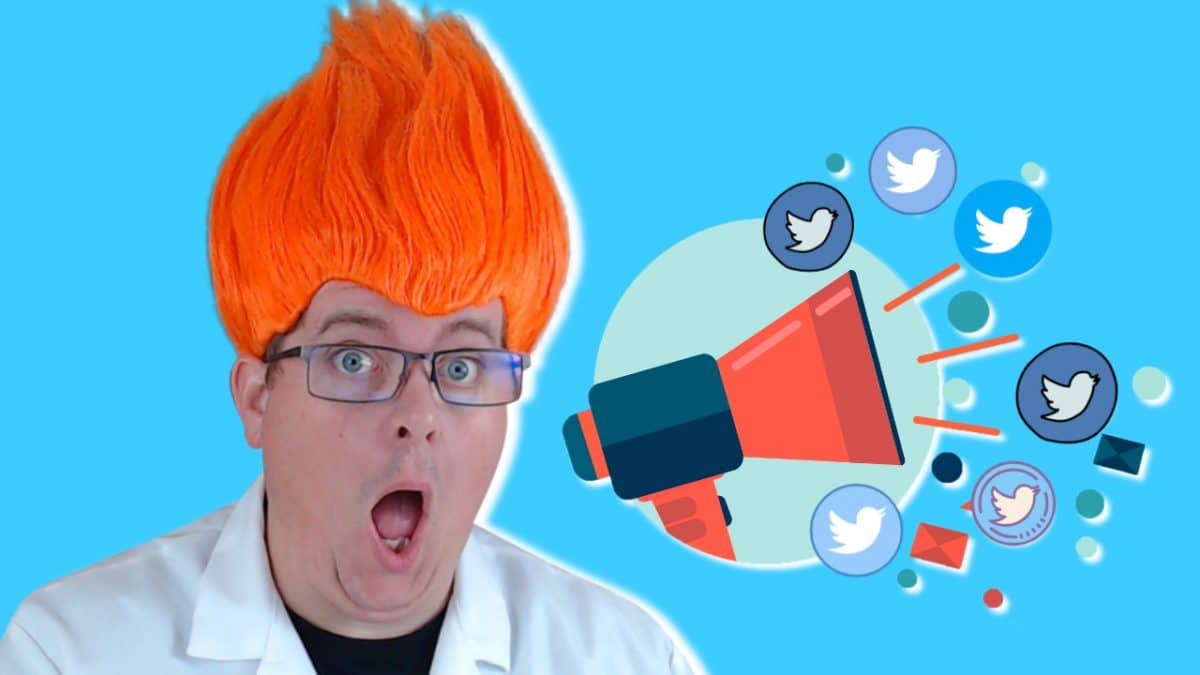 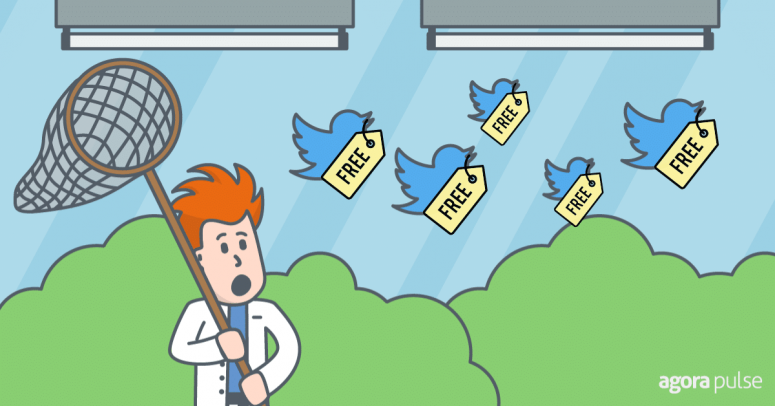 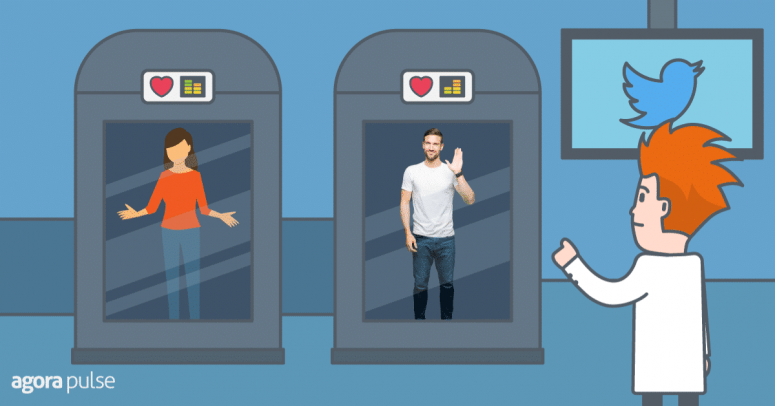