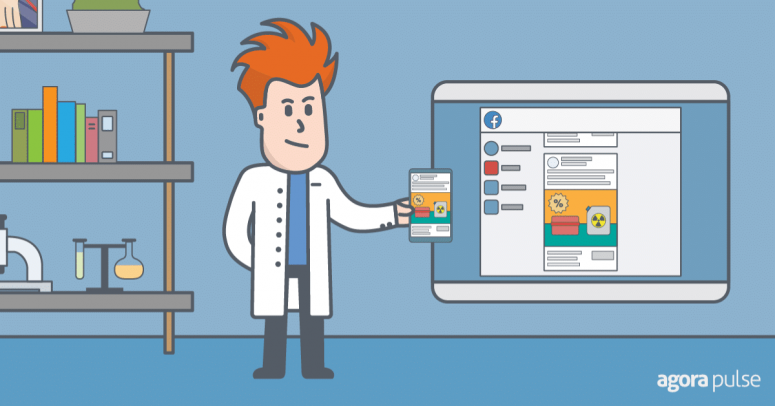 $2000 To Find Out If Facebook Mobile Ads Are Better Than Desktop Ads!

Should You Focus on Facebook Mobile Ads or Desktop Ads?

For quite some time, the usage of social media has moved to a mobile experience. Apps, such as Snapchat, Instagram, and TikTok are only fully available via mobile devices.

Marketers (and I) still run our Facebook ads on desktop as well as mobile. But are Facebook mobile ads better than desktop ads?

Should we only run our Facebook ads on mobile moving forward? 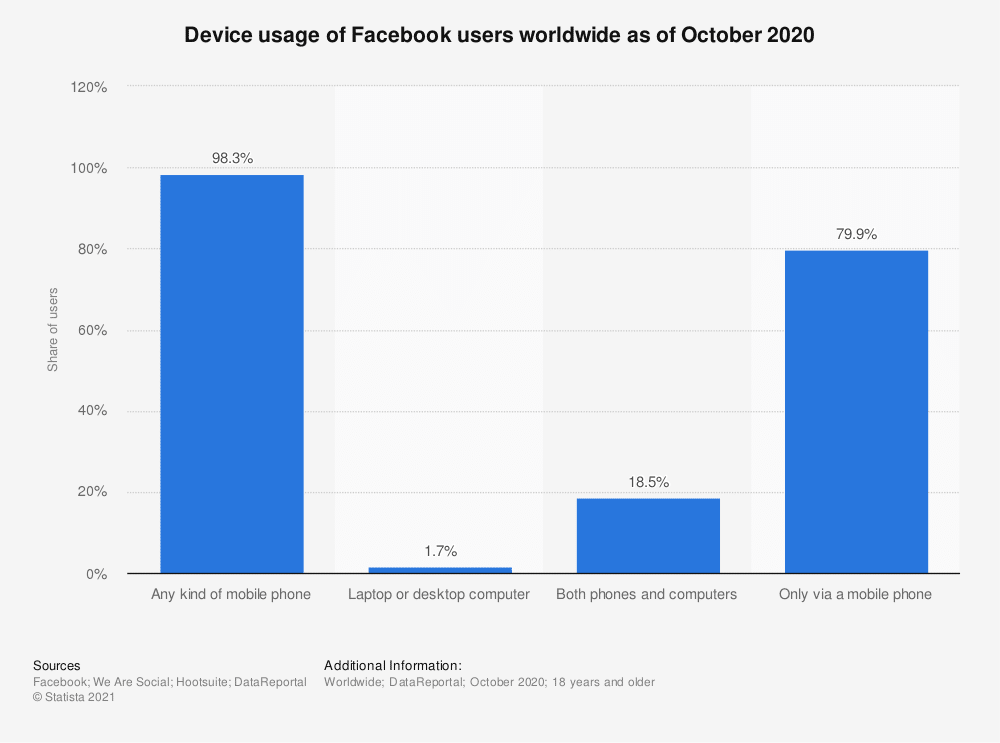 According to SingleGrain 93% of Facebook’s ad revenue is from mobile ads. This data leads SingleGrain to conclude “forget desktop if you’re a marketer — mobile-first is the way to go.”

Based on the large percentage of mobile-only users and the amount of revenue Facebook receives from mobile ads my hypothesis will favor Facebook mobile ads. 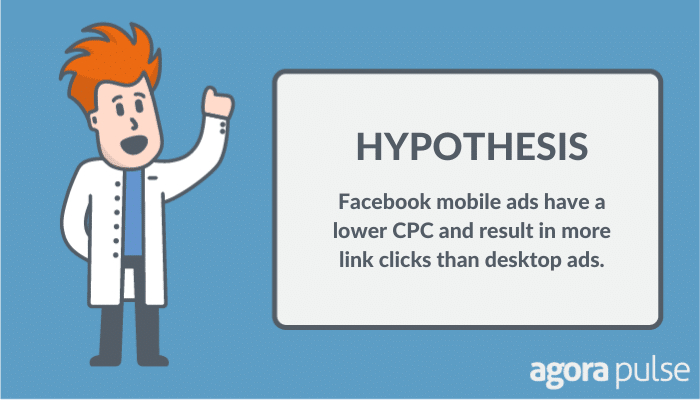 I’m basing my hypothesis on the large percentage of mobile-only users and the amount of revenue Facebook receives from mobile ads.

How We Tested Facebook Mobile Ads vs Desktop Ads

We chose the traffic objective for our ads.

Facebook has this to say about the traffic objective:

“The traffic objective is designed to drive people to your website or app. With traffic as your objective, you can create ads that: 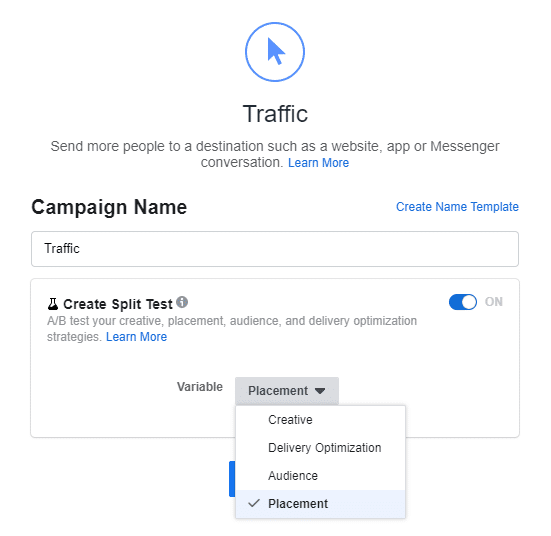 Facebook Ads Manager allows advertisers to split test ad placement. For this test, I simply chose the “placement” option. During the ad set-up process, I then specified what placements I wanted.

The ad placements were desktop and mobile, the desktop ad was restricted to the news feed only (no ads in stories, sidebar, messenger, etc) 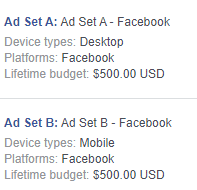 Our ads targeted English speaking Facebook users only who reside in:

We left the age restrictions open to including anyone over 18, seeing as our blog post isn’t a product that only appeals to a certain age.

The interests we targeted were:

These interests are a mix of social media marketing influencers as well as some of our competitors at Agorapulse. 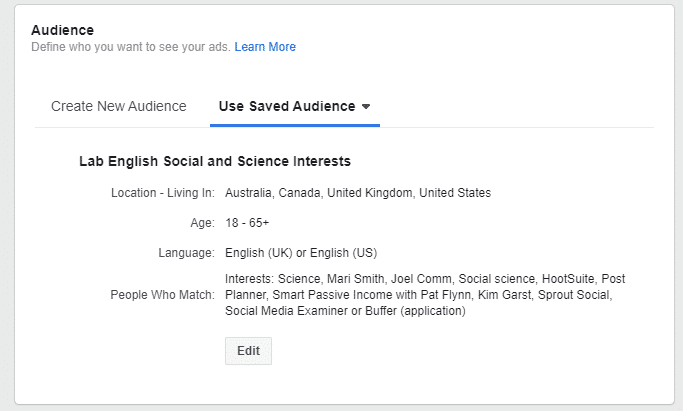 This ad for mobile and desktop ran in January directing traffic to an experiment on using text on Instagram image posts. 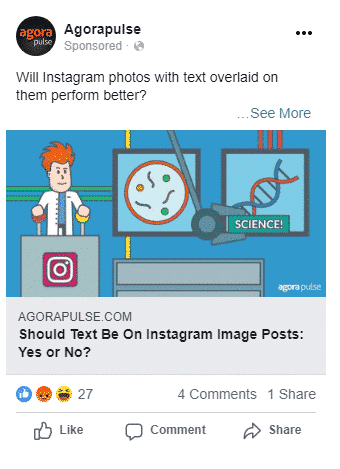 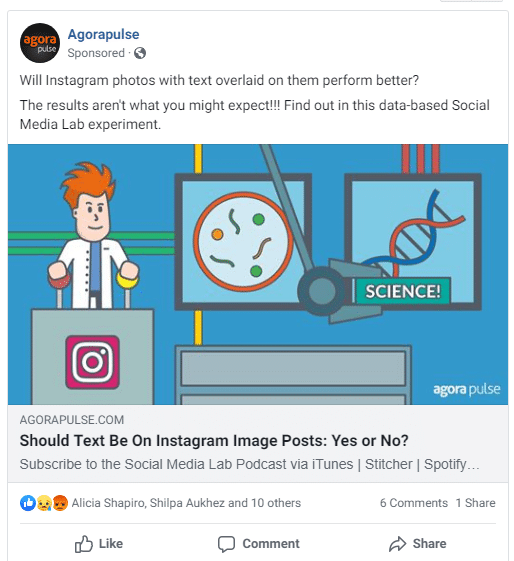 You’ll notice the ads are almost identical, with a few exceptions:

This mobile and desktop ad used in February sending traffic to a study comparing the CPC of Facebook and Twitter ads: 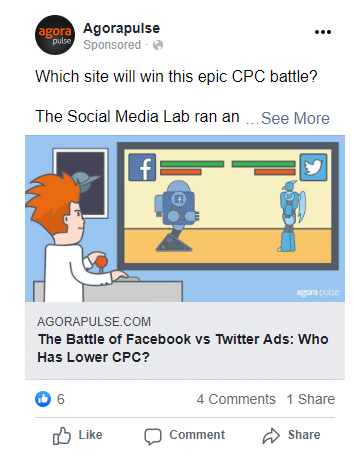 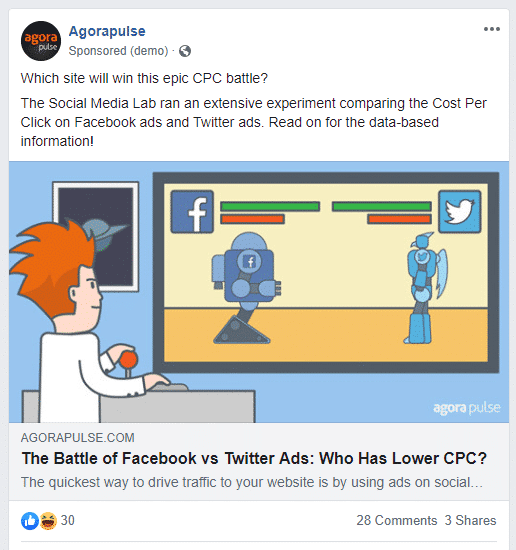 Just as with the January ad on mobile, the text reached the limits in the update and caused the “See more” link. The desktop ad once again pulled in the first line of text from the article.

We will look at many data points to get a detailed picture of how the ads performed on both mobile and desktop:

Why all of these data points?

I want us to have a clear picture of how the ads performed. I’m personally guilty at times of only looking at CPC because the ads I’m running are to drive traffic and not conversions (I’m not selling a product or asking for free signups, just looking for blog post views.)

But if we leave out some of these data points, we may be coming to incorrect conclusions. And Facebook Ads Manager could be misleading your conclusions, or at worse the numbers you or I might be using for Facebook Ads Reporting.

By default, Facebook Ads Manager will show you the Link Clicks results when you choose “Traffic” as your objective. But is this the right metric to look at?

Take a look at Facebook’s definition of a link click: 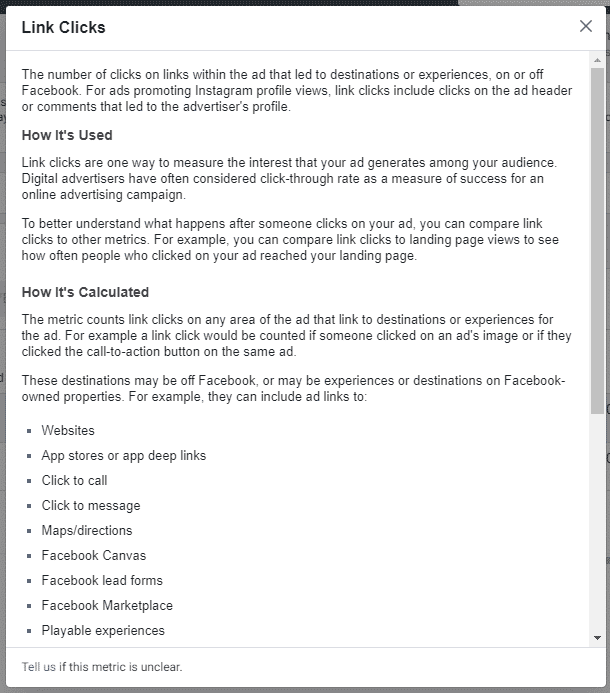 The “Link Clicks” data point is not just counting clicks on your links; this data point counts clicks in comments, clicks on the image, etc. The person may have simply clicked on your profile link, or read the comments, and may have never gone to your website.

Unique Link Clicks is a data point that is likely a better data point to base conclusions of ad performance on. 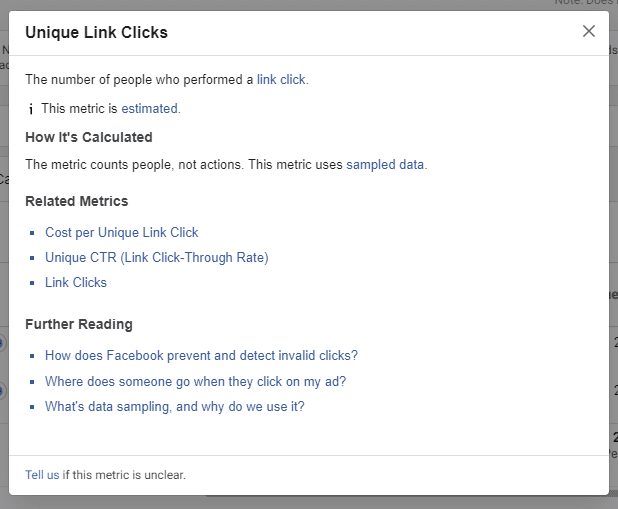 This number tells you how many unique users on Facebook click on the ad. “Link Clicks” could be including a user clicking on the ad 10 times.

But even the “Unique Link Clicks” could be falling short of 100% solid data.

Landing Page Views may be the better stat to look at when evaluating ads that are purely for driving traffic. 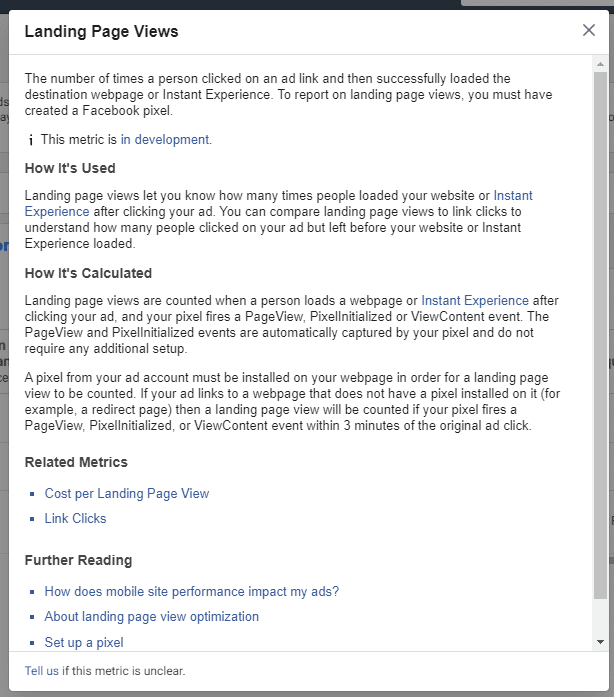 The “Landing Page Views” data only counts when the user clicks on the link and lets the website load. You’ll need a Facebook Pixel installed, and in our case, we have it setup.

Based on this information, “Landing Page Views” sounds like the most important stat to take into consideration when evaluating which ad drives the least expensive traffic. Looking at just “Link Clicks” could mean some of the Facebook users never click the actual link.

We are including the social interaction data to gain insight on where users might engage with the content more. This isn’t the goal of the test but it’s an interesting piece of data to compare.

The Results of Testing Facebook Mobile Ads vs Desktop Ads

Here’s the raw data after averaging the two mobile ads together and two desktop ads together.

Facebook mobile ads outperformed on every data category except the social engagement numbers, based on our study. Raw numbers are hard to compare, so look at the percentage differences favoring mobile ads.

Based on the data from this Social Media Lab test, we can conclude that Facebook mobile ads outperform desktop ads when driving traffic to a blog post. 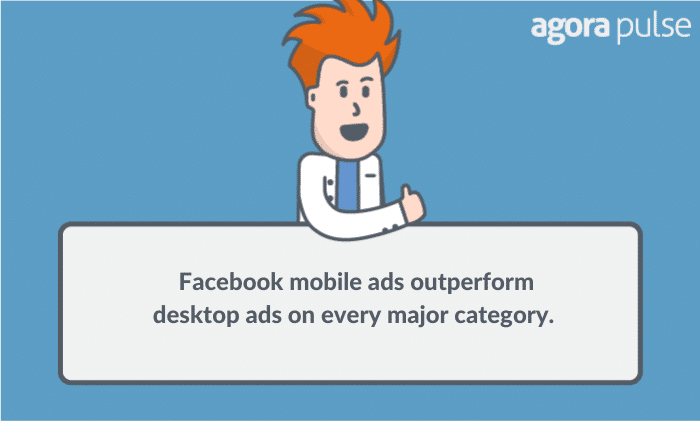 There was less engagement on the mobile ads, which isn’t too surprising since the mobile nature of social media tends to be a quicker, less engaging experience (at least for me). The engagement wasn’t our goal on the ads, but it does add value to the ads when others start engaging.

As more and more Facebook users become mobile-only, it would be wise to primarily focus on mobile ads. Desktop ads shouldn’t be completely eliminated, as there is lots of ad inventory there, but based on our data it doesn’t perform as well.

Keep in mind our ad experiment wasn’t driving users to a sales page, lead magnet page or anything that was intended for conversions. This is purely a test for awareness and drives traffic. Your results could be different depending on your product.