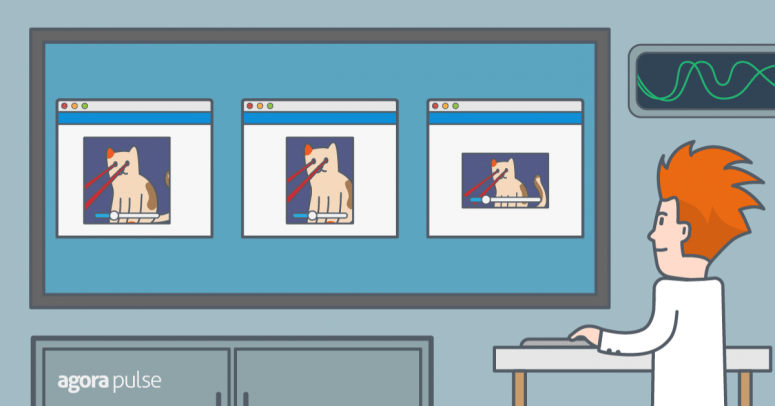 Which Video Aspect Ratio Is Best for Facebook Video Ads?

If you’re looking for a lower cost per click (CPC) on your Facebook video ads this experiment in the Social Media Lab is for you!

What do we mean by “video aspect ratio”? This refers to the size of the video as seen on devices.

This graphic from Idea Rocket should help visualize the different sizes:

You notice there are many video size choices an advertiser can choose for Facebook Ads. Is there a preferred video aspect ratio?

“Seven of the ten tests showed that vertical video ads drove an incremental increase in brand lift, including a three- to nine-point increase in ad recall.”

That’s a 70% swing in favor of vertical videos in Facebook ads.

Even though my assumption was square videos would perform better, due to how they show up on mobile devices, I’m going to lean towards Facebook’s data for my hypothesis.

Hypothesis: Vertical video ads have the lowest CPC on Facebook. 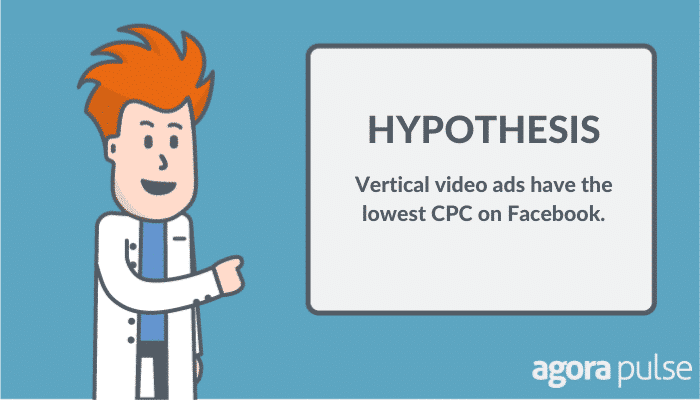 I’m basing this assumption on the findings Facebook found during its research. But the companies they tested with were big, global brands, so we need to test on a smaller scale.

The Social Media Lab teamed up with Wave.Video for this experiment. We both ran ads on our Facebook pages to determine if we see a clear winner regarding the video aspect ratio in Facebook ads.

Budget: $150 per account, divided between the three video sizes. (Although our ad budget was set to a maximum of $150, the full amount isn’t usually spent due to ad bidding on Facebook and the inventory Facebook has in its system at the time.)

The video below was used (in three aspect ratios) for the Facebook Ads testing for Wave.Video. 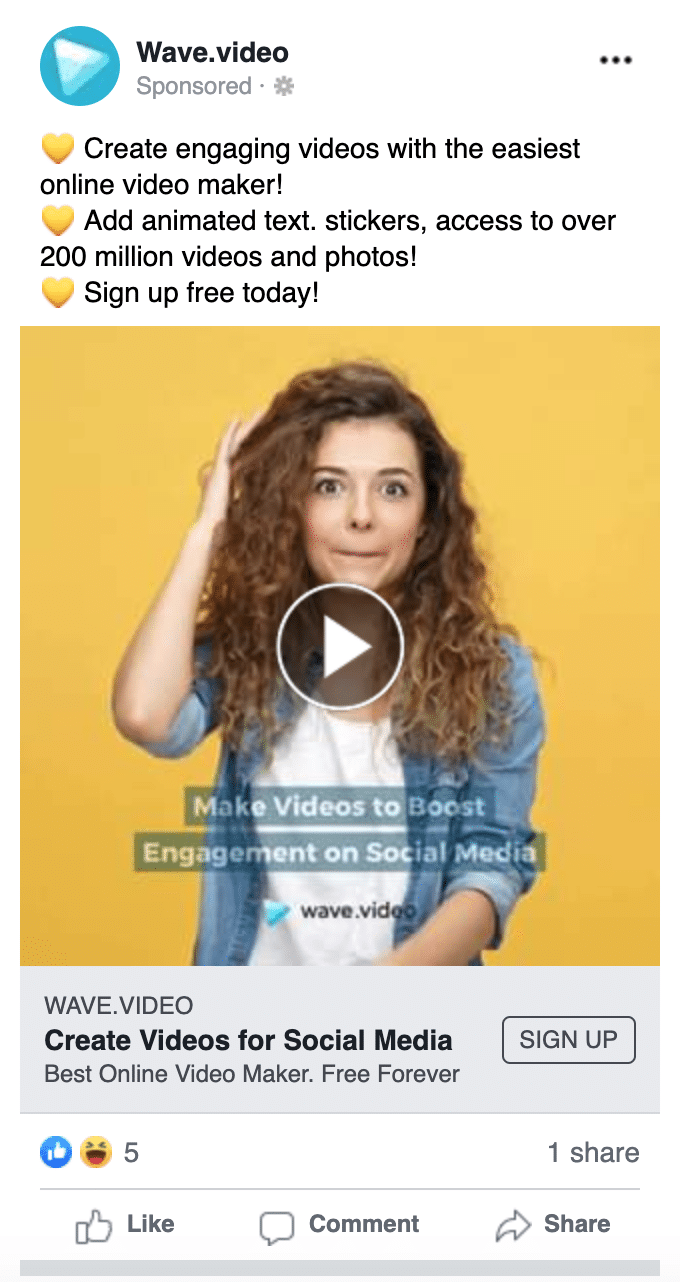 The video used for Wave.Video had subtitles on all aspect ratios. In addition, all ads had the same text in the update. 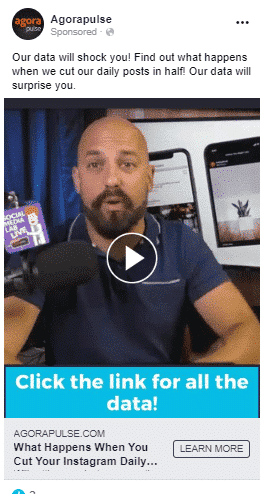 There were no subtitles on the Agorapulse ad. The text in each ad was the same for each aspect ratio.

The Results of Aspect Ratio Test on Facebook Video Ads

When you run a split test on Facebook Ads, you’ll automatically see which ad won based on the objective you are testing.

In this case, we were testing the “Creative,” which was the aspect ratio of the video ads.

Facebook will send an email, such as the one below from a different test, that states which ad won the split test: 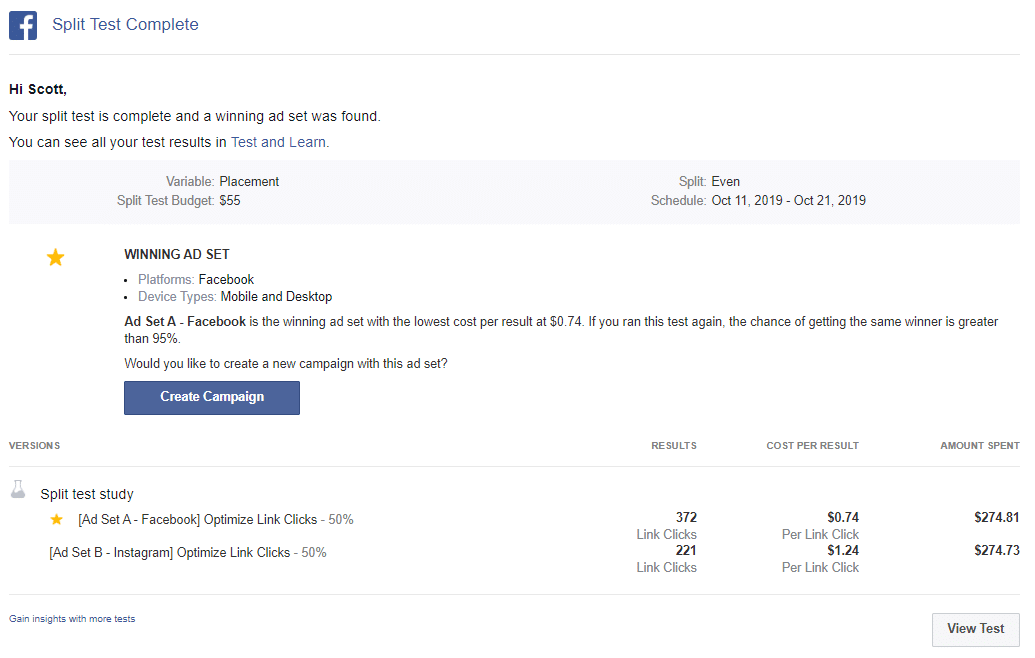 But, for some reason, I never received the email from Facebook on this particular test. This could possibly be due to some sort of glitch on Facebook Ads.

You can also go into Facebook Ads and, after a few clicks, see the winning ad:

It’s honestly a bit hard to get to inside Facebook Ads Manager. To find the data needed to properly analyze you must:

But from there, you’ll see all the detailed data for the test. You can also export the data selected to a spreadsheet for analysis outside of Facebook.

Another great way to see the winning ad is from a free Agorapulse tool called AdsReport. Once connected to the site with your Facebook profile, you can search by ad title, and there is all the info you need: 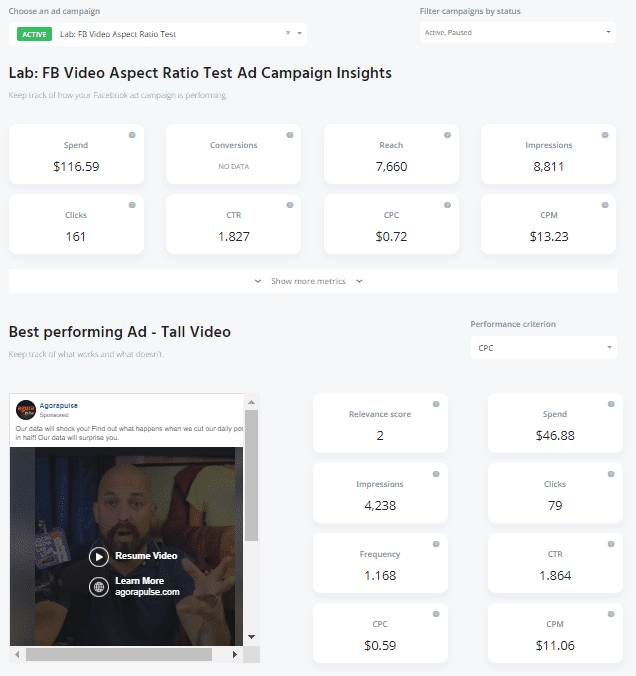 I share these only to make you aware of multiple ways to find your data when you test Facebook Ads.

We could look at many data points, but our only focus for this test is CPC.

To properly evaluate this test,  let’s take a look at the combined CPC averages of the Agorapulse and Wave.Video Facebook ads.

The vertical ad had the lowest CPC. 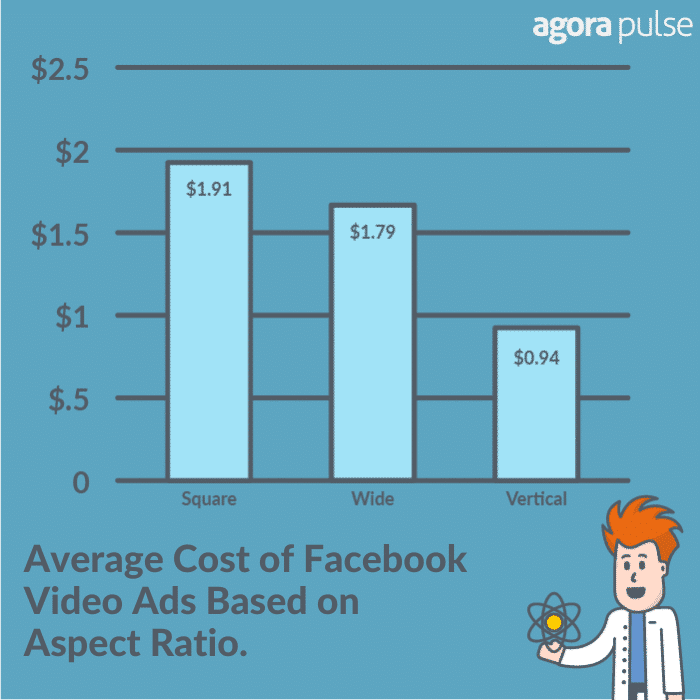 Subsequently, the vertical ad had a higher reach, more 3-second views, more ThruPlays, and more consumers that viewed 100% of the video.

Based on the data from the Social Media Lab testing, combined with data from Wave.Video, we conclude that for Facebook video ads the best aspect ratio to get the lowest CPC is vertical videos.

Our hypothesis was correct, and further supports the findings Facebook made on its A/B testing. 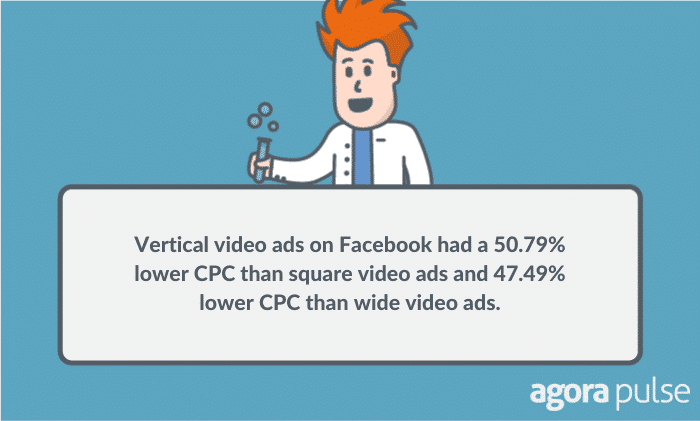 Vertical video ads saw a 47.49-50.79% lower CPC compared to square and wide video ads on our testing. This amount of savings could make or break a company’s profits, especially as ad budgets go higher and higher.

The Social Media Lab recommends your Facebook video ads be in the 4:5 vertical aspect ratio moving forward to maximize visibility and engagement and save money.