There are many creative ways to market on social media and there is no shortage of possibilities when it comes to running ads.

With massive amounts of targeting options marketers can showcase their ads in front of the right eyeballs, at the exact right time.

But, it requires work, precision and a good budget to get correct.

For many on Twitter they either don’t have the time or knowledge to make this happen.

This is especially true for smaller businesses.

Twitter refers to this as their “always on” promotion engine.

“Short on time? Twitter Promote Mode automates your brand marketing efforts for less than the price of a cup of coffee per day, enabling you to focus on creating your best Tweets.”

Basically for a monthly fee of $99 Twitter will automatically select your tweets and promote them — if they pass their internal requirements.

“Whether you’re building your personal brand or a business, Twitter Promote Mode grows your influence by automatically amplifying your message to a larger interested audience. For a low monthly fee, your Tweets and account will automatically be promoted. Reach up to 30,000 additional people and add an average of 30 new followers each month.*”

30 new followers per month for $99 on top of getting your links promoted — sounds pretty good.

Obviously results may vary — and Twitter makes no guarantees of results.

There are a few things to keep in mind about Twitter Promote:

Before testing I wanted to see what others had experienced with Twitter Promote.

“Participants cannot choose which tweets to promote – they can only toggle Twitter Promote on or off. In addition, the tweets can be only be targeted by selecting up to five interest or metro locations or regions in a selected country. That’s a less robust targeting solution compared with Twitter’s existing ad platform.” – TechCrunch

Rhys Gregory did a quick video overview on YouTube about Twitter Promote and said he would not renew the monthly fee due to the poor results.

Drew Harden from Blue Compass ran a test shortly after Twitter Promote launched and had this conclusion:

“If you’re an inexperienced Twitter user on a limited budget or if you’re primarily concerned with brand awareness, it’s a great choice. The simplicity along with the time and money savings it offers makes it an attractive option. On the other hand, if you have online conversion goals and a specific audience, Promote Mode’s general targeting may not work well for your brand. You will be better served with the much deeper targeting of Twitter Ads campaigns and its ability to promote specific tweets and an expert social media team to get you started.”

James Parson of Follows.com had some great advice about Twitter Promote:

“The way I see it, Promote Mode will be worthwhile if you can meet the below criteria:

Based on these opinions and from other articles I’ve read on Twitter Promote let’s make this our hypothesis for this study:

Twitter Promote will not be worth the $99 monthly fee based on followers gained.

In order to test Twitter Promote I’ll be using 2 Twitter accounts so that we can see if we notice any similarities or differences in performance:

Both accounts primarily tweet links to Agorapulse and Social Media Lab blog posts, along with tweets about social media news and marketing.

During the 1 month testing period no change in the schedule or normal pattern/method of tweeting was made.

You can access on your mobile or desktop, personally I’m still about 90% desktop with all of my activities (call me old school) so here’s what it looked like on the dropdown to get to it:

On mobile tap on your avatar to do the same thing.

Once there you’ll see a similar setup screen as this:

For targeting you are given 2 options however — interests or location:

After choosing Interests you can select up to 5 relevant interests:

There aren’t a ton of choices, but it’s not bad.

Once you enter your credit card info and agree to get started you’re promotion will begin for 30 days, with auto-billing turned on. (So make sure to turn off if you don’t want to get billed again.)

Gathering the data from Twitter Promote is pretty straight forward.

Let’s take a look at each of these stats so we fully understand them.

The %more reach is not compared to previous time periods, it simply means the Twitter Promote system gained that much more reach for those tweets promoted.

These screenshots help decipher this.

The yellow bars indicate the added reach the promotion got, light blue is the organic reach; the dark blue is the number of tweets promoted per day.

Twitter gives us a day overview of when followers were gained. But no explanation how they correlate it.

Why the Agorapulse account had dates with no followers gained I’m not sure, and it seems after a few days Twitter shows their promotion efforts resulted in no followers for my personal @Scottayres account. Not sure why.

This is often an overlooked stat IMHO.

Driving traffic to the links you tweet obviously is of utmost importance, other than getting followers. But getting people to go to your profile and have a look at what you are all about has HUGE value. Especially if your profile has good branding and urls in the descriptions to click on.

Huge spike towards the end of the promotion, again no real way to explain that. Perhaps Twitter pushed the remainder of the $99 balance on that date..

Very slow in the beginning, but pretty equal from about halfway through until the end. Which is odd since no followers are being correlated for those days.

Twitter doesn’t really give users alot of information on the tweets promoted, but does give this graph to stare at showing how many tweets were promoted.

Right off the bat the followers gained stat sticks out and is a disappointment:

Definitely less than the 30 new followers Twitter suggests will occur.

If we put a dollar amount to that it’s pretty bad: 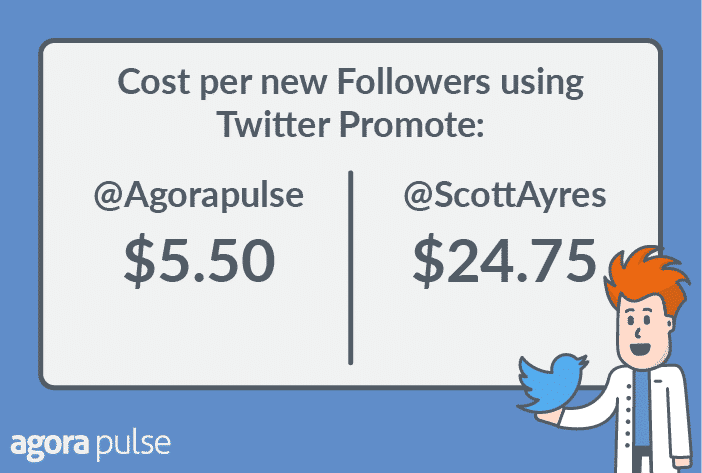 Depending on your product this could be good or bad. I’m gonna conclude it’s bad.

This disparity might be due to the difference in follower account, with @Scottayres having 6k more followers than Agorapulse. Perhaps those targeted using the Interests chosen were already following me? I don’t know. But this cost per follower would make any marketing manager cringe!

Organically both accounts gain more followers per day than this Twitter Promote option did.

The added Reach for the tweets promoted is nice, but hard to evaluate and equate that to any sort of conversion metric.

Did they click on the links and visit our site? Did they become free trial users? Did they get a paid subscription?

There is no way to track this using Twitter Promote. Sure I could use utm parameters on every tweet and track this way, but Twitter itself gives us no tracking and no way of even knowing what tweets were promoted or not.

The profile visits are nice, but again no data to pull from it.

The only data I can truly use for evaluation is the follower gain.

And it was an absolute failure.

While I’m disappointed in the follower growth from the experiment and the lack of trackable data it’s not the worst use of money ever.

If you’re just starting out on Twitter this is probably a great way to have Twitter do the heavy lifting for you and get some added exposure.

Maybe after a few months using Twitter Promote you dive further into Twitter ads and get more control.

If even 1 of these new followers gained turned into a paying customer it’s money well spent and a great return — so I can’t fully knock it.

But if you’re a serious marketer you’re better off making sure tweets with your best content that converts being where your ad money is spent.

It’s highly possible a link you tweet to say the World Cup results could get promoted using Twitter Promote — there is simply no way of controlling this.

So unless every single tweet you make is 100% business focused and highly converting I’d stay away from Twitter Promote.

This was the most hands off experiment I’ve ran thus far, but definitely one I was curious to find out about.

I won’t give Twitter Promote a second thought moving forward.