So, don’t sabotage yourself. Don’t drive your audience away. You’ve spent a lot of time thinking about best practices – which is good, you should be – but if you don’t watch out for the worst ones too you may develop a few bad habits. Costly bad habits.

In fact, there’s 5 in particular that we really have to warn you about. And BuzzStream and Fractl put together an infographic recently that talks about why.

So, in the off chance you want to just ruin everything, here are the 5 ways to lose your fans and followers en masse.

1. Spam  Your Audience as Much as Possible 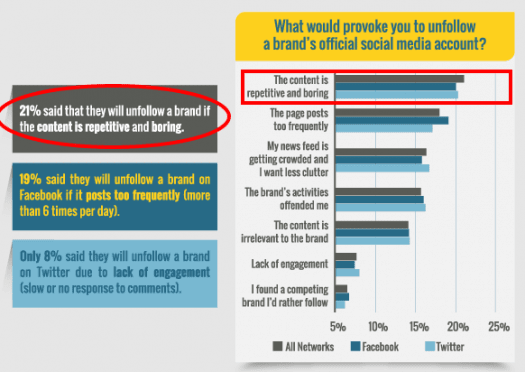 It goes without saying, but you can always have too much of a good thing. Even if you’re posting the right kinds of posts – not hard-selling – you can still drive your fans and followers away.

You want to post regularly, of course. That’s important. But keep your cadence reasonable. A good rule of thumb is to post about once a day on Facebook tweet three times a day on Twitter. Just take a look at the data Buffer pulled up; it speaks for itself.

And it’s not surprising, really. Think about the email newsletters you subscribe. I’m sure you like them a lot less when they come every morning, evening, and night. The content might be good – it may not drop off at all – but too much of it comes across as, well, intrusive. And that’s not what you want to be.

I know it’s important to stay connected to your social media audience, and posting is the right way to do it, but you really should have something to say. And by that I mean, you should have something different to say. You shouldn’t be repeating the same messages over and over again – especially if they’re pitching a product.

So, stay current on your industry. Keep a finger on the pulse. If you work at a clothing store – let’s say you specialize in raw denim – talk about how to care for them, or post videos of do-it-yourself repairs. Whatever you do, make sure you’re changing things up to keep your fans and followers coming back for more. 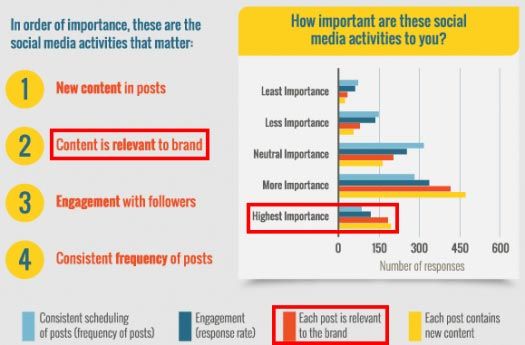 If you operate a motorcycle company, there’s a very good chance your Facebook fans aren’t coming to your page to read about your taste in music. B2B Twitter accounts generally don’t tweet film recommendations either; their audience just doesn’t care.

Of course, these are more egregious examples – you can stray off-topic more subtly too – but they serve a purpose. You can’t forget that you’re here to deliver value to your fans and followers. And that value revolves around what you’re selling, what you’re doing, who your brand is. 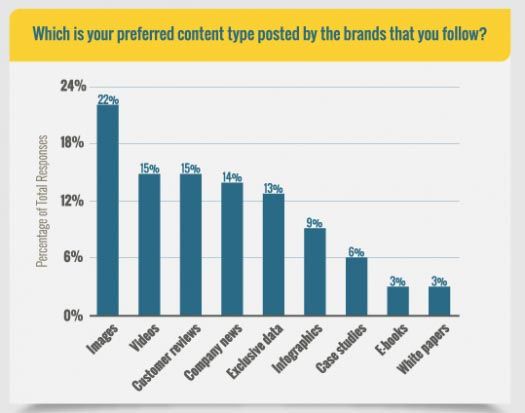 When it comes down to it, most of us don’t have that much free time. We like a lot of things in bite-sized increments. Small portions. Quick and easy.

White papers – well, they’re not quick or easy. They take a while to read and even longer to fully digest. So, your fans and followers really don’t like them. They’re not very keen on e-books either, which are even more of a commitment, and case studies aren’t winning popularity contests.

But images and videos? Those are. Images especially.

If you want to get a point across, it pays to think about how to express it in those mediums. You’re simply more likely to be heard (or seen). And to take the point a little further, your overall content strategy – in terms of content type – should reflect these preferences. Being heavy on case studies and light on videos isn’t the way to move up.

It’s the way to get unfollowed. 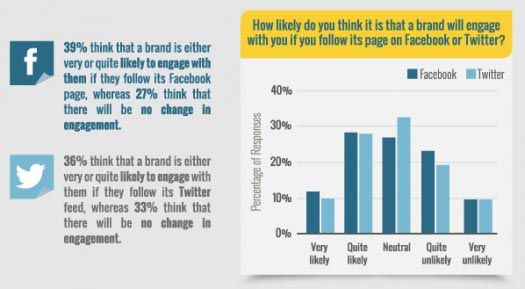 Finally, let’s think about what you ultimately want your fans and followers to do. On social media, that is. You may go for conversations offsite or offline, but on your Facebook pages and Twitter feeds you want engagement. Engagement leads to conversions, after all – and not just theirs either. The more people they spread your message to, the more impressive your quarterly statement will be.

And the great part is, they want to engage. In fact, if you don’t engage with them – if you ignore comments and never invite them to join your conversations – they’ll find somebody who will. Which is not to say they overwhelming expect you will – most are neutral on the matter. But they want it. And they generally have some expectations – however low – that you need to meet.

[Tweet “Your fans & followers expect you to engage. Don’t & you’ll lose them.”]

Keeping what you already have is rarely easy in any kind of business. But it’s important. You invested in acquiring those fans and followers, so you really owe it to yourself – and your bottom line – to not lose them.

So be sure not to commit any of the cardinal sins above. And give the original infographic a read for a fuller picture of just what makes a social media audience chip away.

What Is a Social Media Value Chain and How Can You Create One?

How to Craft a Social Media Landing Page That Wows

How to Start a Social Media Marketing Agency: Step by Step