1. Ask How They'd Use Your Product2.  Ask Something Controversial3.  Cite a Quote4.  Reference a Recent Event5. Take a Survey

1. Ask How They'd Use Your Product2.  Ask Something Controversial3.  Cite a Quote4.  Reference a Recent Event5. Take a Survey

If you’re like most social marketers, you worked hard for your fans.

You designed your page well, ran exceptional ad campaigns, and integrated Facebook with more than a few of your online – and offline – channels. And that’s why you have the fans that you do.

But if they’re not engaging, they’re not really fans at all. They’re certainly not helping your business in a very material way. And if that’s the state of your page right now – if you have too many fans with too little activity – now is the time to do something about it.

While there are many ways to marshall your fans into action, a particularly easy way is to just ask them something. A question. But the question you ask matters. It will determine the kind of activity you get.

That’s why today we’ll talk about 5 questions that just work, so your work isn’t wasted.

1. Ask How They’d Use Your Product

This is a natural kind of question to ask. You should be able to come up with quite a few of these questions readily, too. And the rationale behind it is clear – get your fans thinking about how your product or service will make their lives better.

You can’t be too blunt, though. Facebook isn’t for hard-selling. It’s not for selling at all, really. It’s usually not a problem to mention your product specifically – like, “What’s your favorite meal to cook in your George Foreman Grill? – but it can be even more subtle. And the more subtle it is, the less it comes across as marketing, which makes it – ironically – more effective marketing.

And that makes it attractive in the context of a road trip. When BMW asks its fans to comment about the road trips they’re planning, it doesn’t specify that they’d be in a BMW. It just mentions a road trip-worthy model – the 2 Series Gran Tourer – at the very end, which is more product placement than outright advertisement.

But it gets people thinking about what a road trip would be like in a BMW. And even if they don’t see themselves in that 2 series at the time, it plays to the German manufacturer’s value proposition nonetheless. 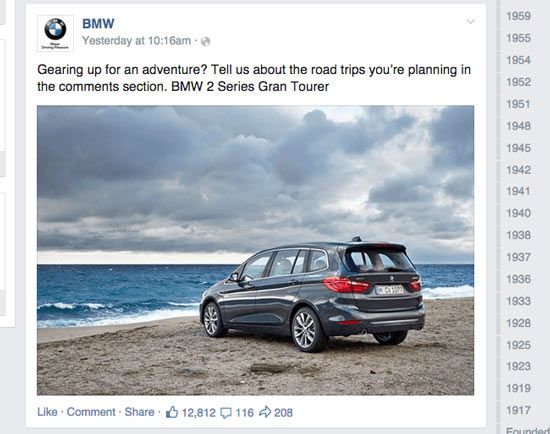 [Tweet “If you ask your fans to think about how they’d use your product, they’re more likely to buy it.”]

We’ve all come across a post so lurid that we just had to read it. It may not have been what we were looking for – it was probably wildly off-topic – but we read and commented on it anyway. We just couldn’t resist.

Although it’s something of a low tactic, asking controversial questions or questions about controversial things is a well-established way to get fans to engage. It simply works. But you have to be very careful.

In particular, make sure whatever question you ask:

The subject might be shocking, but it shouldn’t disgust your fans – that’s not what they’re on Facebook for, and it’ll invoke negative emotions when they think about your page and, by extension, your brand. Tread carefully.

Less critical but still important, it should also be relevant. Just asking your fans about controversial things doesn’t really work if they can’t relate it to your company or industry. It just comes off as sensationalist click bait.

The BBC post below gets it right. It asks its fans if they would let a baby sleep outside in the cold, which is very emotionally charged because it involves young children in a (presumably) dangerous situation. The difference is, it’s framed in the context of a cultural norm and doesn’t talk about neglect or injury. It’s also relevant, as the BBC is a news outlet. 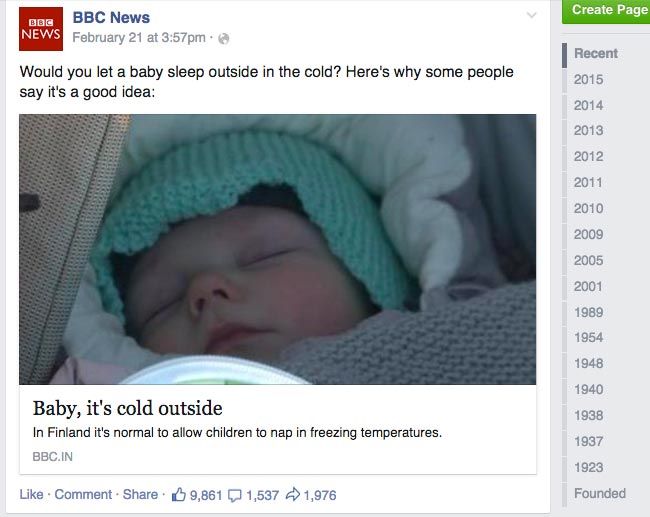 Brevity works. That’s why we have aphorisms. And when they’re said by somebody famous, they have a contextual power as well – who that person is, the circumstances in which they said it, etc.

If you scroll down long enough, you’ll find that most of the top brands on Facebook have cited a quote at one time or another. You’ll also notice that many of those quotes relate to their company, industry, or brand.

Ford has surely posted a few of Henry Ford’s remarks on its page, and it shouldn’t be hard to come across a few of Steve Jobs’s insights when you look at pages in the software and hardware space. And when a company prides itself on, say, an image of rebellion – like Harvey-Davidson or Rolling Stone – you’re likely to come across more than a few counterculture figures in their posts.

So, think about the kind of company you have and what you’re selling. More importantly, think about what you stand for – as a brand – and what famous people convey the same image. From there, it’s not too hard. You’re not writing anything yourself, after all! 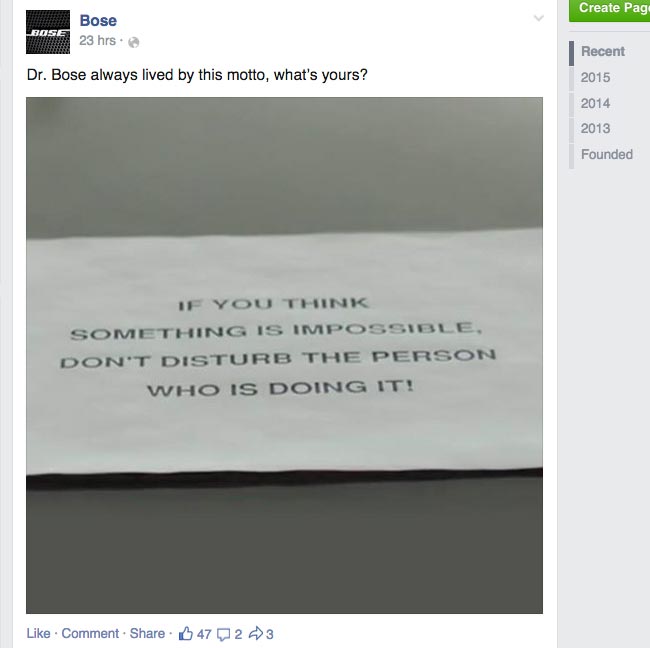 Timely posts get read. They get commented on, too. Whenever something just happened – when it’s top-of-mind – your readers will notice posts about the event more readily. They’re thinking about it to begin with.

And when that event is a cultural phenomenon – like the Superbowl – you can be sure of it.

But, there are a few things you have to consider first. To start, you want to be relevant.

During this year’s Superbowl, Disney ran a ad for Disneyland. Later, they posted on Facebook about it. That made what would otherwise be a stretch – asking who’s coming to a theme park after a major sporting event – something their fans expected and appreciated. It also integrated their traditional and digital media campaigns, which has a synergistic effect.

You also want to be appropriate, too. Don’t play at levity when you post about a natural disaster. Kenneth Cole learned this the hard way after making light of revolution in Egypt a few years ago.

That said, once you’re relevant and appropriate, ask away! People already like to give their opinions, and they like to do it even more after something important just happened. 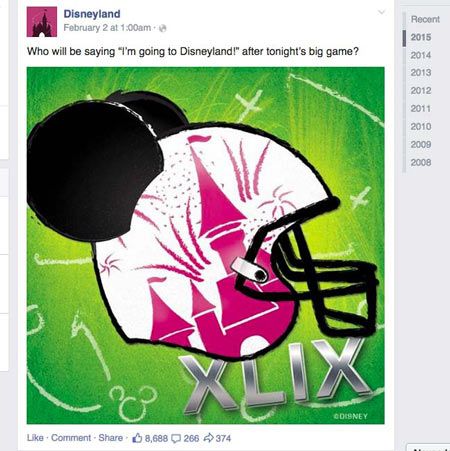 [Tweet “When posting about recent events on FB, make them relevant to your brand.”]

Admittedly, this one isn’t quite as compelling as the last. You’re more likely to get a response when asking your fans what they think of the latest championship game or political upheaval than asking them to take a survey. But it still does work.

Before you start, though, take a moment and think about what you’ll ask in your survey. Think about why you’re conducting one in the first place. It’s market research, of course, but what kind? The longer your survey is, the lower your response rate will be, so think carefully about what fields you put in. You don’t want to give your fans a bad experience.

That said, don’t forget to think about why they’d want to take it in the first place. Cite a compelling statistic. Ask them about it. Or dare them to put themselves to the test.

And, then, frame the entire thing as a question. You want to get them thinking – to provoke a response. Maybe it’s a challenge, or maybe you’re just kindling their curiosity. Whatever it is, asking is more inviting than telling. 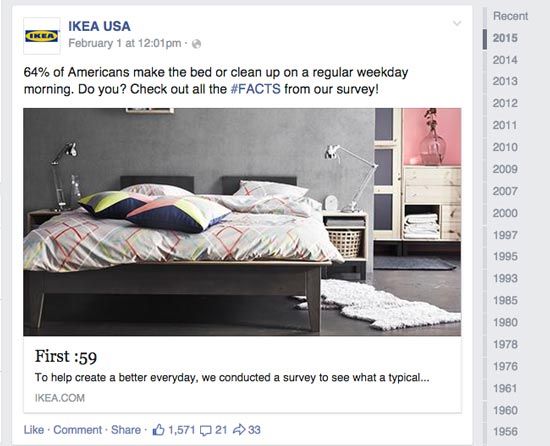 [Tweet “Ask – don’t tell – your fans to take a survey. Use curiosity or a challenge to get them to engage.”]

Of course, getting Facebook engagement is a complex, multi-dimensional thing. There are many ways to do it.

But asking a question – the right question – is one of them. It’s proven. It works. And frankly, you should be doing it.

And then let us know how it went in a comment below!