Is boosting a Facebook Live Video replay worth the cost? We recently conducted an experiment to find out.

At Agorapulse, we have two weekly Facebook Live Video shows:

Social Pulse Weekly was started in Fall 2019 and is an interview-based show hosted by Jennifer Watson, Agorapulse’s social media manager. She covers current social media news and topics with guests in the marketing industry.

Both live video shows help us to continually provide helpful actionable information to social media managers and marketers, foster conversation among our audience members, build brand recognition, and strengthen our community. Week after week, we have many of the same people commenting on our live shows.

But I began to wonder if boosting our live shows was actually getting beneficial results or just inflating the view count.

Hypothesis: Boosting a Facebook Live replay does not result in more engagement.

What to Measure After Boosting a Facebook Live Video

I wrestled with what metric would be the best to draw a conclusion on whether boosting a Facebook Live video was worth the money.

During the live video, the three most important metrics for gauging its success are:

Peak live viewers is the most important number. It lets you determine if your viewership is growing week after week and if you are maintaining the attention of the viewers.

Engagement numbers (reactions, comments, and shares) tells a lot about a Facebook live video. A good live show should include asking questions and encouraging the viewers to respond. This engagement should be then shown on screen, if appropriate. But the real reason for pushing for engagement is this causes the friends of those commenting to see the live video in their newsfeed. All this gives the live video a potentially new, larger audience.

In this experiment, I included one-minute views. Why? Because this number will give you a clear picture of how many unique viewers watched at least one minute of your live video.

For example, in the live video stats below of a Social Media Lab LIVE, we had 204 peak live viewers and 463 one-minute views during the live broadcast: 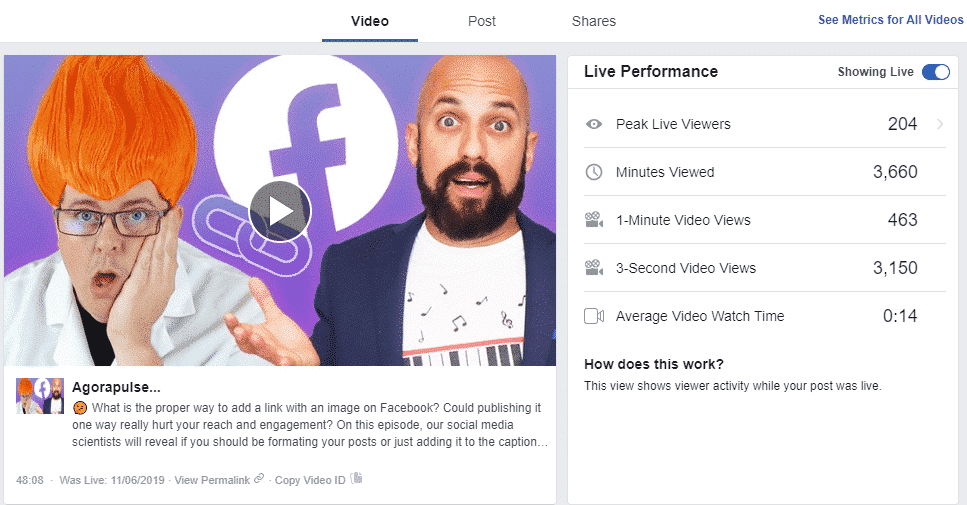 This signals to me that an additional 259 people hopped in to watch the live show for at least one minute.

However, Facebook says this stat shows how many times the video was viewed for one minute. Could this mean multiple viewers who watched for one minute left then came back? I couldn’t find clarification from Facebook on this anywhere.

This is why peak live viewers, as well as engagement, are the most important numbers to look at when you evaluate your Facebook Live video performance.

If we toggle the switch on the upper right to “Showing All,” we see more metrics from Facebook: 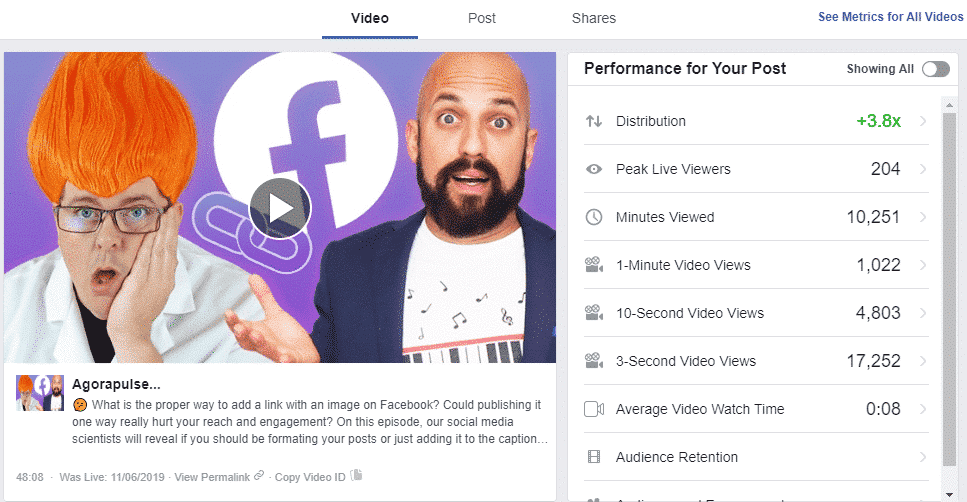 This Facebook Live was boosted. As you can see, some of the stats are pretty high—yet possibly misleading (or at best useless):

Once you boost a Facebook Live, check out these stats specific to the boost:

“ThruPlay is an optimization and billing option for video ads through the Video Views objective. ThruPlay allows advertisers to optimize and choose to pay only for ads that are played to completion for videos shorter than 15 seconds. For longer videos, ThruPlay optimizes and bills for ads that are played for at least 15 seconds. This optimization is available with auction or reach and frequency campaigns.”

Getting 15 seconds viewed of a minute or less video is great. However, if your live videos are at least 30 minutes long, like both of our live shows, this stat is useless.

The confusing part of these insights is the video views from the boost. From what I can gather, this is counting 3-second views, a stat that really means nothing. But again, Facebook likes to report large view counts on videos in their attempt to unseat YouTube.

The increase in Reach is a useful data point to evaluate. Exposing your brand to more people encourages brand recognition. The more a user sees your posts and the giving nature of your content the more you turn a cold audience into a warm audience.

For our evaluation, we will look at these data points:

Engagement will be the most important insight for our experiment. If Facebook users aren’t taking action by engaging or clicking on links, I’m not convinced the ad spend was worth the cost.

We spent $2,577 boosting these live replays, on average spending $143 per video.

These are the total numbers produced from boosting the 18 live video replays:

Massive amount of Reach and 3-second views overall. A 171% increase in Reach is very helpful for a business for brand recognition.

The boosted replays led to an enormous amount of 3-second views. Again, those are rather pointless when the live videos are sometimes an hour long.

The engagement numbers are dismal from our boosted live replays. Which wasn’t shocking to me…  Most viewers aren’t going to comment on a replay of a live video. The person conducting the live videos isn’t engaging in the chat in real-time (because it’s a replay), so the viewer isn’t motivated to add comments.

The share numbers were acceptable, but 27 shares for a $2,577 ad spend is not a great use of money.

Facebook Live videos are increasingly popular for businesses as a way to deliver their message, train, and build community.

The most successful live video shows aren’t selling anything in particular. (Save that for your emails, ads, and webinars.) Live shows are simply attempting to get engagement. Engagement is a hot commodity on Facebook these days as it pertains to organic posts, especially comments.

A page might post a link or photo or video, and get only a handful of engagement, if any.

Done correctly, a live video gets dozens and dozens of comments, reactions, and shares.

Based on the very low engagement numbers from our boosted Facebook live video replays, the Social Media Lab concludes: Our boosting efforts were a failure, and yours might be as well.

The added Reach is beneficial as that could lead to recognition on future posts or ads, but it doesn’t equal any immediate responses or actions.

Save your money for ads that drive traffic to your website or blog.