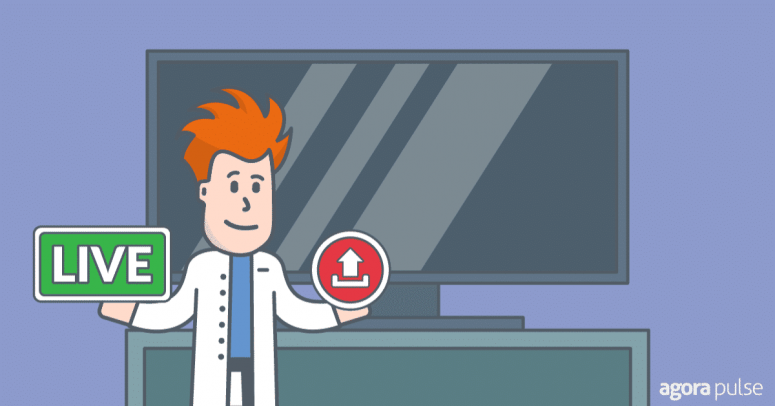 You don’t have to look hard to find “experts” spouting claims of how great Live video is and why you should use it.

Entire conferences and massive amounts of training courses are dedicated to teaching business owners how to conduct a Facebook Live video.

Controversy over long-form (and live) video arose however when Mike Stelzner, CEO of Social Media Examiner, canceled 2 of the live video shows they were conducting on their industry-leading page, as well as no longer uploading their documentary to Facebook. Social Media Examiner made this decision because they concluded no one was watching their videos.

This cancellation caused panic in the industry. That’s an understatement— people freaked out!

Creators everywhere scrambled to reassure their followers that long-form, and live video, was not dead.

But is Stelzner right?

His decision, and subsequently the team’s decision, was based on audience retention. Video views tend to be the main focus of marketers, not retention. Plus Facebook makes the stat hard to find.

When they compared retention on the same uploaded video on YouTube vs Facebook, the numbers were shocking—dare we say revealing?

For example, Social Media Examiner saw this on Facebook:

And here’s the data from the same video on YouTube:

As Social Media Examiner dug through the data of all its videos, both uploaded and Live, it saw the same trend: low retention and low average watch time.

So, Social Media Examiner nixed 3 of their weekly Facebook videos: 2 were Live shows and 1 was the uploaded Journey documentary. The Journey moved exclusively to YouTube after this decision.

My knee jerk reaction was to think this was an unwise decision!

I feared this decision would cause a ripple effect across social media and that it could drastically skew the industry. After all, Social Media Examiner is the leading provider of social media marketing information and can easily sway things with one simple email or Facebook post.

Social Media Examiner’s thought was publishing content people aren’t engaging with sends a poor signal to Facebook’s pesky algorithm, and therefore could be punishing their page.

I wonder what the loss of engagement on those videos will do to their page over time. Sure, the views were low towards the end, but engagement is so crucial.

The problem with Facebook’s Insights is they count a view after viewing just 3 seconds, which is, in many cases, people seeing the video on autoplay in their newsfeed.

The View count is a conflated, and inflated number. Why Facebook continues to report this number is beyond me. The “10 Second View” count is closer to the reality of the actual number of people viewing.

Facebook appears to love to inflate egos with large view counts in the world of vanity metrics.

Did We All Mis-Understand Social Media Examiner’s Decision?

I wonder however if Social Media Examiner really intends to imply Facebook Live video is dead?

Watching the above PSA video led me and other marketers to believe Stelzner was saying long-form Live video, as well as uploaded video, was dead.

I had a conversation with Michael Stelzner and turns out that wasn’t his intention or the intention of his team at Social Media Examiner.

While admittedly the retention and view count was low on the 2 Live shows they killed that wasn’t meant to imply Live video on Facebook was dead. It just happened to come at the same time as realizing their long-form uploaded show the Journey was performing poorly.

Social Media Examiner’s main reasons for stopping those 2 live shows, according to Michael Stelzner, was ultimately lack of engagement compared to their other Live show.

They worried that low engagement and views on these Live shows would send a poor signal to Facebook and cause their most important Live show to have less exposure.

In the hour-long Live video below the team at Social Media Examiner talks in detail about this decision starting at about the 7 minute mark.

Stelzner makes a few mentions that Live video has a place and is great for pages if done correctly — so no need to panic here live video creators!

This doesn’t mean it should replace your live videos, but with the highly competitive Facebook newsfeed does it make sense to post short videos? Or will doing so give more poor signals to Facebook if engagement and retention are low?

At the Social Media Lab, we love data!

We wanted to see how data from our Live video show, as well as Live video from interviews, compared to short videos uploaded to the Agorapulse Facebook page.

There is conflicting information regarding long-form video, as you read in the introduction.

Facebook celebrates the increased engagement from Live videos, which tend to be longer in nature. Yet Social Media Examiner says long-form video is dead on Facebook due to low retention rates and we should consider pivoting to shorter uploaded videos.

Both are valid points, but they deal with different sets of data.

Perhaps we can find a way to correlate retention and engagement as it relates to uploaded, short videos versus long-form, Live video. 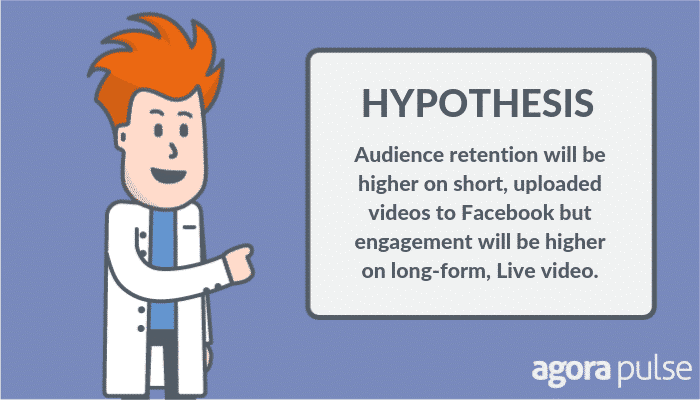 As of this post’s publication, Agorapulse has conducted 15 episodes of the Social Media Lab LIVE show.

We will use data from these scheduled and formatted shows then compare to 2 other sets of video posts from Agorapulse:

The Live videos will vary in size from 25 minutes to over an hour while the short videos are under 90 seconds.

The Social Media Lab LIVE show is a highly produced show I co-host with Owen Video, usually weekly. We often have social media experts as guests.

In each episode, we cover the findings from one of our experiments.

Here’s a screenshot of one of those episodes. In this one, we were fortunate to interview influencer/author/speaker Joel Comm: 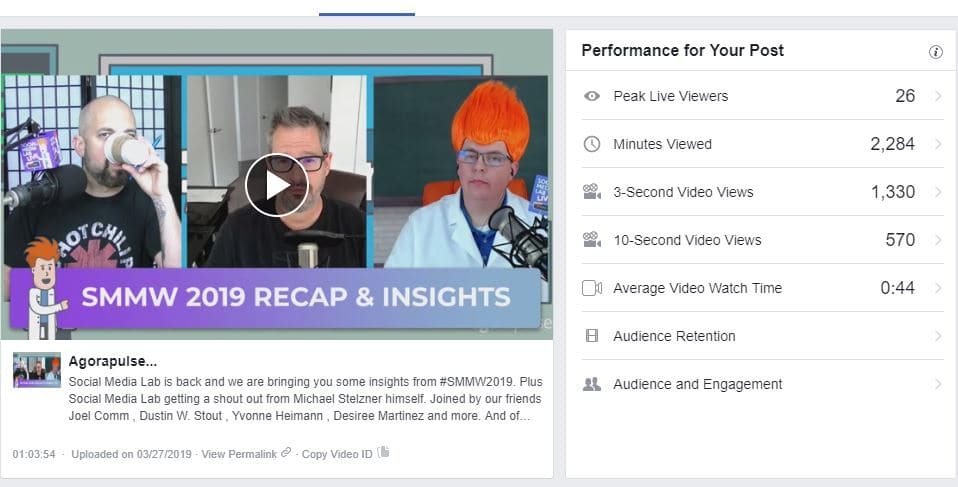 For the unscheduled Live videos, I interviewed social media experts about their 5 favorite online tools. They weren’t planned ahead or at any given time. Some literally went live with no planning or notice to our followers.

Here’s a screenshot of me interviewing Agorapulse friend Jeff Sieh: 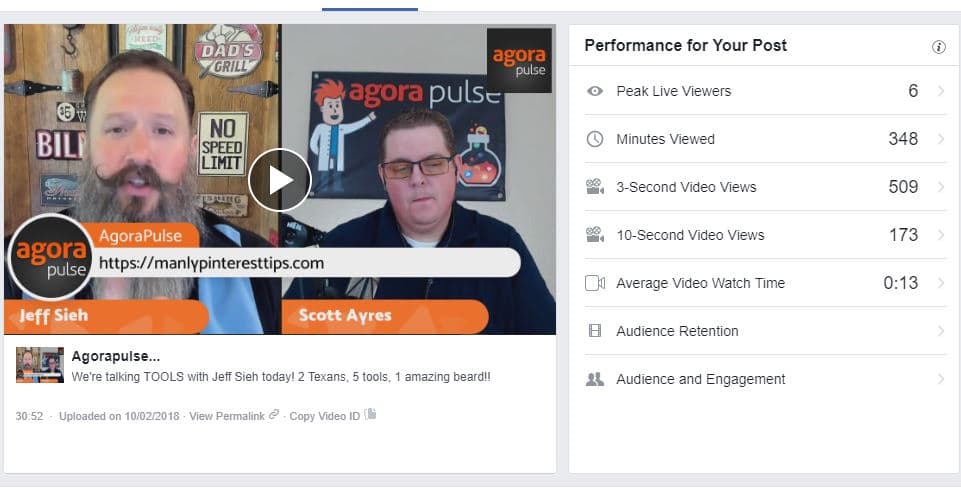 The last set of videos we will look at are highlights taken from a few different live videos. Some were taken from our prelaunch show of Social Media Lab Live. We asked the experts to give us their big 2019 tip during the show and shared that segment.

Then months later, we uploaded those videos to the Agorapulse Facebook page. We also pulled some tips from a Facebook Live of our Brand Evangelist, Mike Allton, interviewing expert Jenn Hermann about some of the new features of Agorapulse, then later uploaded those segments.

All those uploaded videos were less than 90 seconds. Here’s a screenshot of the tips video from Dustin Stout: 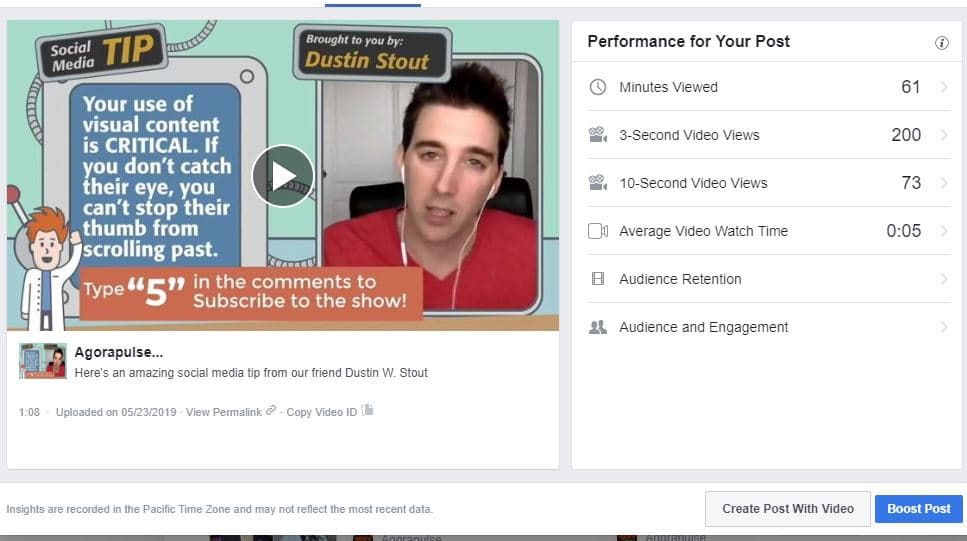 For each video, I will gather various different data points to help draw a conclusion.

All data points highly favored Live video, except one …

Before I reveal that (yes, I’m teasing you!) let’s look at the other data.

Live video won on all of these data points:

But if we look at “End of Video Retention,” Live video was actually 93.09% lower.

Drawing a conclusion solely on “End of Video Retention” is inaccurate and perhaps misleading.

This data set combines the retention of all viewers, including those that had the video autoplay in their newsfeed. They all have that setting turned on to autoplay all videos (I recommend turning it off). So, it means they didn’t really want to watch the video.

As a marketer, you shouldn’t put any value in this piece of data. It’s as worthless as the View count.

You should only care about the engagement and views of those that choose to watch your videos—the Click to Play data.

Though only 1.31% of those that Clicked to Play stayed to the end of the Live videos, a dismal 0.26% did the same on the uploaded videos. And those videos only averaged 81 seconds whereas the Live videos averaged 42 minutes.

It’s easy to see why Mike Stelzner and his team at Social Media Examiner nixed these shows. Retention is lower on their Facebook videos compared to YouTube ( at least for the 1 uploaded video they shared data on).

Considering the Live videos for Agorapulse, the Click to Play Retention is over 400% higher when compared to the overall Audience Retention.

Based on the much higher retention of the Click to Play audience on the Live videos (403.85% higher),  Live videos have more value to our audience than uploaded, short videos.

At the Social Media Lab, we conclude that long-form Live video on Facebook is better for our page and something we need to expand. (You should as well!)