As Facebook reach has been a big concern for page owners lately, the goal was to see if the lack or absence of posts over a long period of time would affect my ability to reach fans on a page.

The page is a passion page (an Italian motorbike brand, MV Agusta), I created that page 2 years ago, just for fun and have been pretty lazy updating it.

The last post on that page was from more than 6 months ago, and I was wondering if that would decrease the edgerank score of that page and make it less likely to reach its fans with a new post.

So I posted a photo of the designer of the bike who has just passed away, and, as you can see, after 6 months of total inactivity on the page, this single post got 237 likes, 25 comments and 63 shares:

And, not only did it have a lot of engagement, it also reached a lot of fans, more than 7,400: 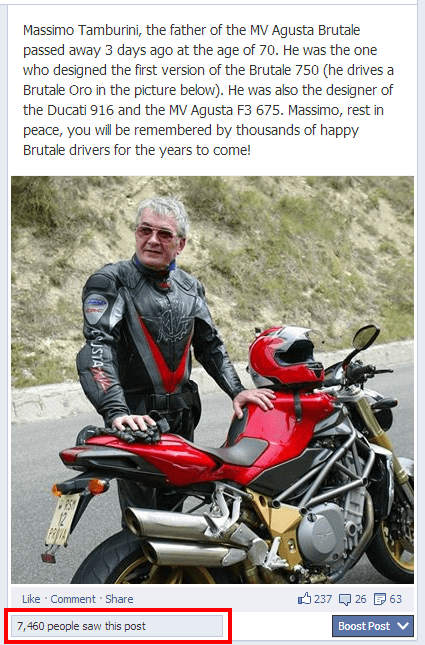 When I published that result, a couple of people commented that this was probably because Facebook was giving me a “welcome bonus” as I hadn’t published in a while. They thought this may not last and my reach would go down with the next posts:

Some also commented that as the concerned post was about the death of the designer of the bike, it was very emotional and probably the reason why I had such a high engagement.

More importantly, my friend Scott was eager to see if that good result would reproduce with future posts:

So I had no choice but to repeat the test 🙂 And I did.

This time, I chose a more neutral post, one that would not convey emotional responses and trigger comments on the topic being the reason of a high engagement. I did not write about the passing of the designer of the bike, I just picked a good looking picture of one of the latest models of the brand. So the post is just about asking people if they like the bike on the photo . Zero emotion. Here it is:

As you can see for yourself, that post got 393 likes, 29 comments and 88 shares. Wow. That’s much more engagement than the previous post that was already pretty amazing. Actually, that’s 64% more engagement.

I guess no more tests are needed.

Facebook will not penalize pages that don’t post often, and if they decide to come back to a regular publishing schedule, they will enjoy the post performance they used to have, even if it was months, or even years ago.

You have a good performing Facebook page but need to take some time off for vacation? Or to refine your content strategy? Don’t worry, you can do it, it will not hurt your future performance.

Hope you enjoyed this one 🙂