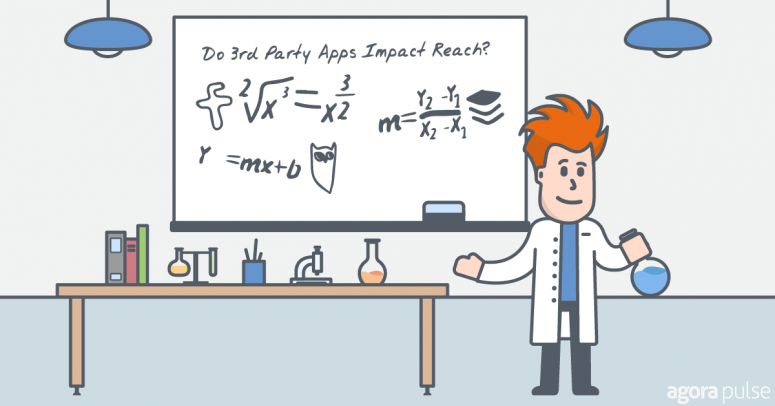 *Note: We have re-tested this study on more than one occasion with the same results. You can see the newer results here.

You’ve likely read articles or seen discussions about the impact posting with third-party apps have on Facebook Reach. You may have even been involved in these discussions.

Using scheduling apps to post to Facebook business pages has been a long-standing element of successful social media management by businesses.

Without those tools implementing a successful social media strategy would be near impossible. Relying on your memory to post updates to your pages would be a nightmare, and sticking to a schedule impossible if you’re just posting when you “feel like it.”

So, these tools are highly important and highly accepted as part of a social media strategy and campaign by businesses of all sizes.

There has always been an argument that Facebook is “punishing” posts from 3rd parties by diminishing the Reach of posts made with them. After all, per this argument, wouldn’t Facebook prefer you to make all posts on its site so you are exposed to as many ads as possible?

Would Facebook really have the audacity to punish these posts? Every story published to a Facebook business page is another opportunity for followers of that page to be exposed to ads.

Let’s take a look at what others have found and then form a hypothesis.

Emeric Ernoult did some research a few years ago and concluded: “You can benefit from the power and flexibility of third-party applications without worrying about negatively impacting your reach or engagement. Don’t hesitate to use them!”

Buffer did its own study and concluded: “From this experiment, it seems that posting using a 3rd party or natively won’t affect your reach or engagement on Facebook.”

They based this claim on the results they got from posting 1 week with their app to their Facebook page and 1-week posting using Facebook. Reach was virtually the same.

The problem with such research is we have no way of knowing whether the pages are posting to a set schedule or simply posting at will. We also don’t know if these pages have any followers at all or are just spammy type pages.

I surveyed a group of 12,000 social media managers and this was their opinion: 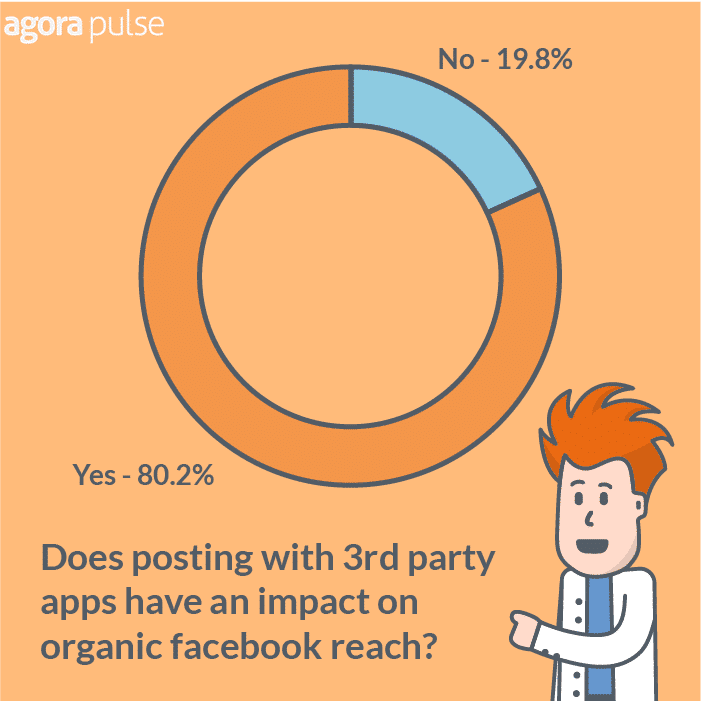 Of those that responded, over 80% believe 3rd party apps impact Reach, and over 93% believe they impact Reach negatively. 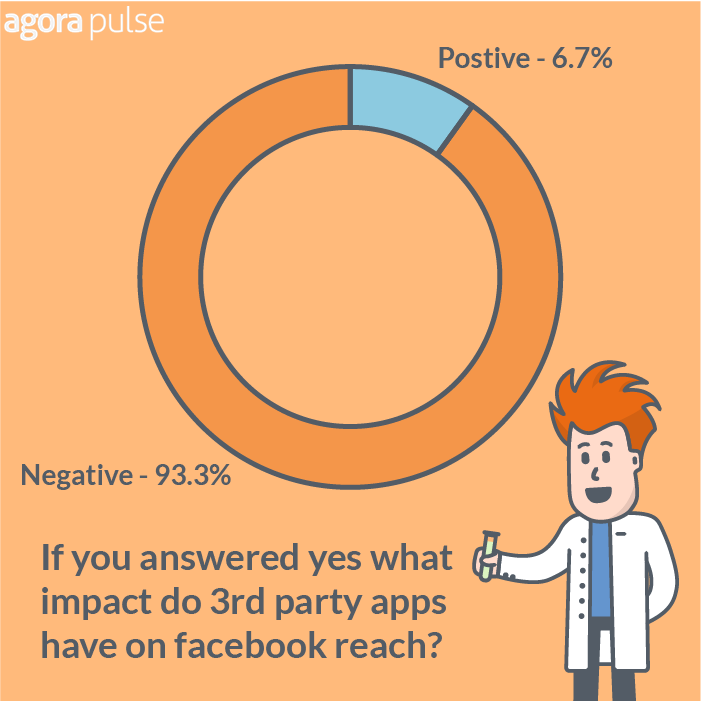 Based on what Emeric and Buffer have found I say Facebook is not punishing 3rd party tools.

Hypothesis: Posting with 3rd party apps has no negative impact on Organic reach 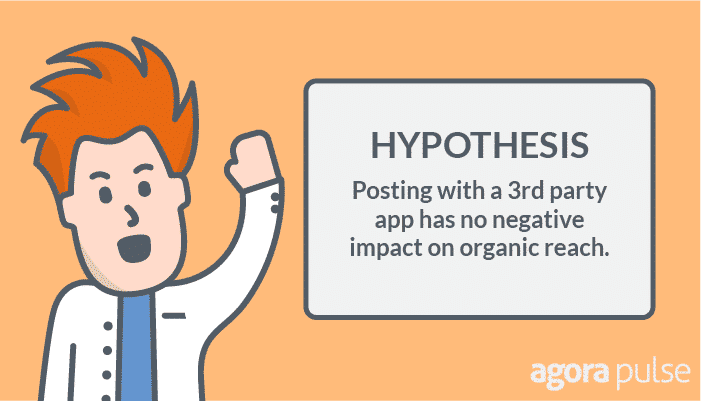 To avoid discrepancies as much as possible, I decided to run a test on 3 different Facebook pages.

Pages Involved in the Test

These 3 pages are well established, all over 3 years old. And they have had lots of content published to them using both Facebook and various scheduling apps.

We limited the test to 4 posts per day, which was very similar to the average amount of posts these pages were receiving before the test.

To ensure I got the most Reach on posts, I spread the posts out as follows:

The test ran for 3 weeks.

Photos and Links were used in this test and posted according to this schedule:

This also was in line with previous strategies used on these pages and also supports a strategy I’ve used for years. My goal as a marketer is to get engagement on photos, so when I post a link to my website, those followers who engage with the photo are more likely to see that link post in their newsfeed due to Facebook’s algorithm.

For Space Walk, all the links will be to either blog posts from my site or product links. Photos will be a mix of images of our inflatables and some funny pictures.

On the Bigfoot page, I will be using funny Bigfoot-related images I haven’t used in the past along with Amazon affiliate links to Bigfoot related products and a few links to articles relating to Bigfoot.

The Grace Bible Church is a bit more challenging as there isn’t a blog for the church. So most links will be either to a worship album or to articles relating to Christianity. Images will be spiritual-related or funny.

To get true data on whether Reach is impacted by 3rd party scheduling apps, I wanted to ensure every app posted different types of content and in different time slots and days per week.

To accomplish this task, I set up a rotating schedule per day of the week. (Hootsuite = HS, Agorapulse = AG, Buffer = B, Facebook = FB)

My hope with this schedule is each app gets seen by every user and gets different post types. This will give us a truly equal playing field for our results.

Did posting with 3rd party apps have any impact—positive or negative—on Facebook Reach?

Keep in mind that the Reach numbers Facebook supplies in their Insights are for all people who saw your post. These could be people that Like or don’t Like your page. So don’t use these numbers to determine a Reach percentage of your fan base as that would be a false number.

Was My Hypothesis Correct?

Now that we’ve dug through this data, did my original hypothesis hold up?

As you recall, I stated, “I hypothesize that posting with 3rd party apps has no negative impact on organic Reach.” 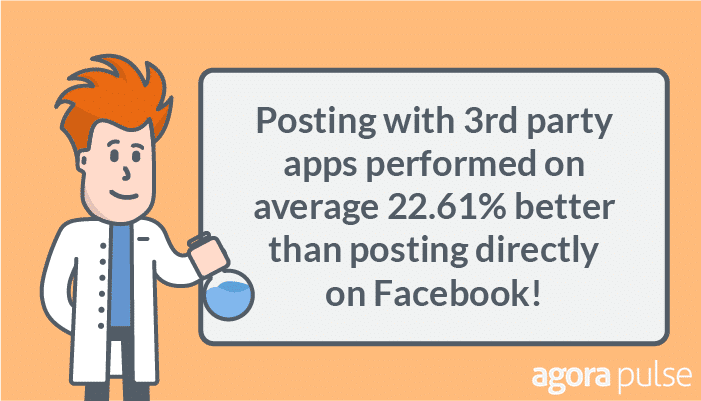 [Tweet “According to research by @agorapulse 3rd party posting apps get 22.61% better Reach than posting with Facebook! #socialmedia”]

Now that I completed this study, I know in hindsight that I would do some things differently.

I have been using 3rd party apps to schedule content to my Facebook pages for years, and this data proves that there is no reason to hesitate to do it.

So choose a scheduling app that you are comfortable with, is easy to use, and is within your budget and start posting!