Will Facebook Link Ads with a Call-to-Action Button Perform Better?

Will Facebook Link Ads with a Call-to-Action Button Perform Better?

People love to push buttons on Facebook, well at least when it comes to getting into arguments over trivial things!

We ran a quick poll in our Social Media Lab group on Facebook to find out. A total of 100% of respondents said they run link ads with buttons.

Some respondents did say they had seen or heard ads without buttons were performing better, making me curious to find out myself via an experiment.

Finding conclusive evidence from other sources was a bit challenging during my research.

AdEspresso found that having a button on its link ads cost 2.5 times more per lead.

9Clouds testing revealed a 12% decrease in CPC on Facebook ads without a button (Version A below is with a button, B is without):

These two sources contradict one another. After much searching, I couldn’t find any other tests out there in the social media marketing niche.

With data from AdEspresso in mind, I predict the following.

Hypothesis: Facebook link ads with a button have lower CPC and more clicks. 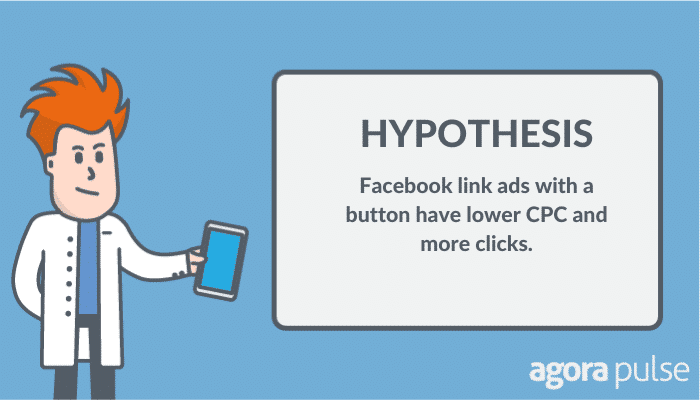 This test was spread out over a few months partly due to budget, but also due to COVID-19 disruptions.

I ran a different ad in March, May, and June split testing ads with and without a button.

Each ad used sent Facebook users to a different article on the Social Media Lab blog:

Ads with a button:

I chose the “LEARN MORE” button on all three ads for consistency purposes. 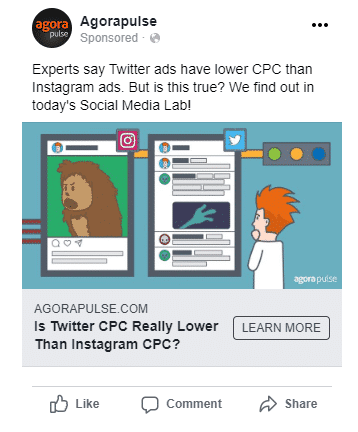 Ads without a button:

Only the Facebook newsfeed was selected as the placement of all the ads, on both mobile and desktop.

The majority of the ads will be shown on mobile based off my previous experience, however.

English-speaking Facebook users were targeted in the following countries:

We also targeted users based on the following interests (meaning they follow these pages):

Results of Testing Facebook Ads With and Without a Button

To properly evaluate the data, we’ll look at the following:

CPC and the number of clicks will be our most important data sets to draw a conclusion from.

I chose total reach and total clicks to test our findings in a statistically significant calculator. The calculator will let us know whether our results should be expected if we were to test again or if you were to run a similar test.

Ads with a button:

Ads without a button:

The Facebook ads without a button performed better in every category, according to our testing. 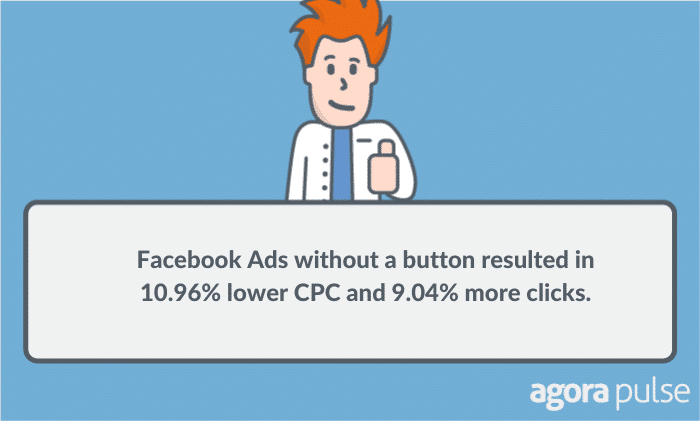 Do these numbers result in a statistically significant conclusion?

As you can see, the ads with the button actually converted to clicks slightly better based on the lower reach but even that isn’t statistically significant.

So what does this mean for our test? Are Facebook ads with or without a button better?

Considering the lower CPC of the ads without a button, I have to declare them the winner.

A 10.96% lower CPC is quite significant, as well as over 9% more clicks for the same exact ad spend.

An added benefit of not including the button is a standard, organic, link post on Facebook doesn’t have a button.

As soon as the button is added, most people will recognize the link post as an ad and possibly ignore it.

Based on the data from this Social Media Lab experiment, I’m going to begin running more ads without a button.

Lower CPC and more clicks are enough reasons for me, even if I can’t guarantee we’ll always get these results.