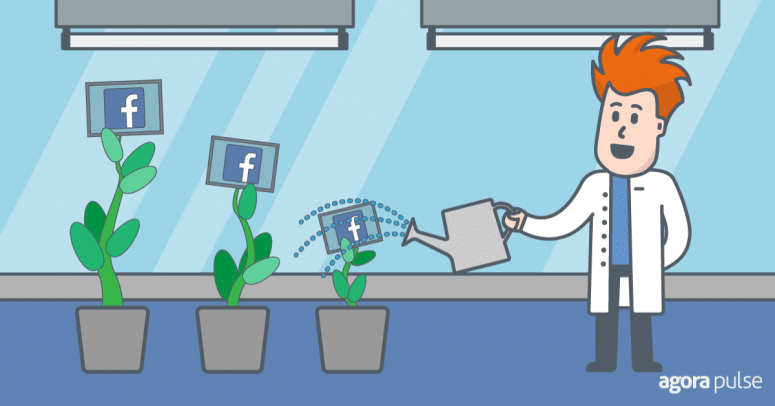 Do You Want to Grow Your Facebook Live Show?

Over the last few years, live videos have gained more and more popularity as every social media platform has added live streaming as a feature for profiles and pages. Businesses have begun to understand that these platforms give preferential treatment to live videos because it keeps viewers on their platform and creates more engagement.

We know from a previous Social Media Lab study that a consistent live show performs better than going live randomly.

The Social Media Lab LIVE show has been airing on Wednesdays for about 16 months and has consistently seen the growth of viewers, as well as engagement.

I’m pleased to share with you some tips from what we’ve done to grow our show.

We could get into tips regarding equipment and setting, such as camera, lighting, backdrop, streaming software, etc. But my goal is to tell you how to grow your Facebook live show, not set it up.

Yes you need a good camera (not the one on your laptop), yes you need decent lighting, yes your background should be good quality and yes you need to use some sort of software to stream your live show. I’m going to assume you have those things already, or can find them via other resources.

If you’d rather watch a video talking about these tips watch this below:

1. Be Consistent With the Time/Day of Your Show 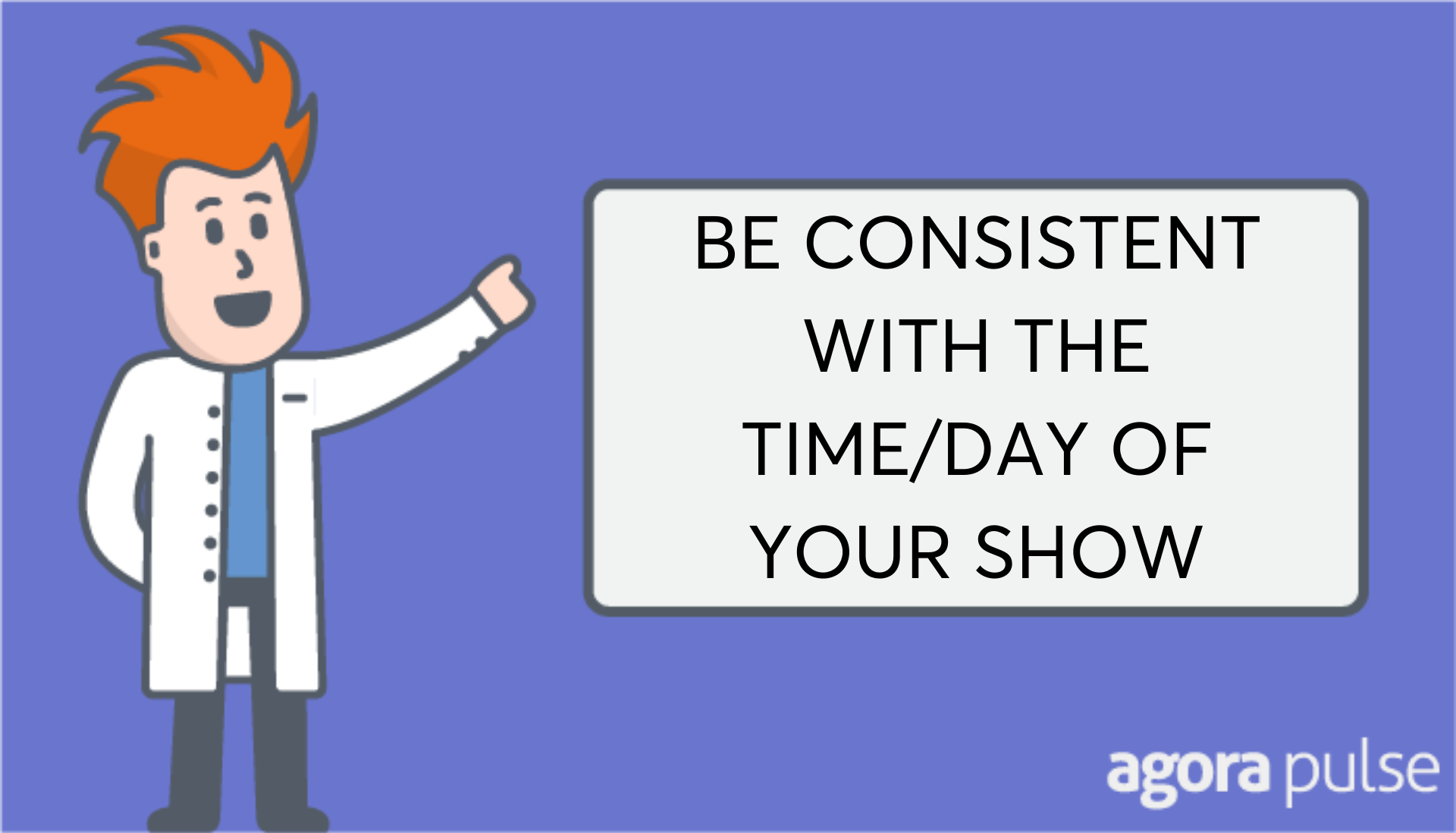 There is never going to be a “best” time to have your Facebook live show every week that pleases everyone. And that’s OK.

A previous Social Media Lab study found that when Agorapulse had a Facebook live at a random, unregular time engagement dropped dramatically.

Choose a time that fits into your schedule and that hopefully isn’t at the same time as competing pages having a Facebook live show. Then stick to that time.

Seriously, that’s it. Stick to the same time and day.

Over time, your most loyal viewers will begin to remember that you go live on Wednesdays at 12 pm EST and expect to see you go live. When you don’t go live at that time, you’ll get messages from them asking where you are. (True story: This has happened to me when we had to miss a week.)

Before the days of DVRs and on-demand television, we knew what day and time our favorite show aired each week. (For example, as a kid, I knew “The Dukes of Hazzard” was on Friday nights at 8 pm.)

Your followers will appreciate your Facebook live happening every week at the same time and day.

Granted, just like when a favorite show moves on the schedule, you may decide to change your timeslot. Just be sure you let your viewers know ahead of time, so you don’t throw off their schedule. 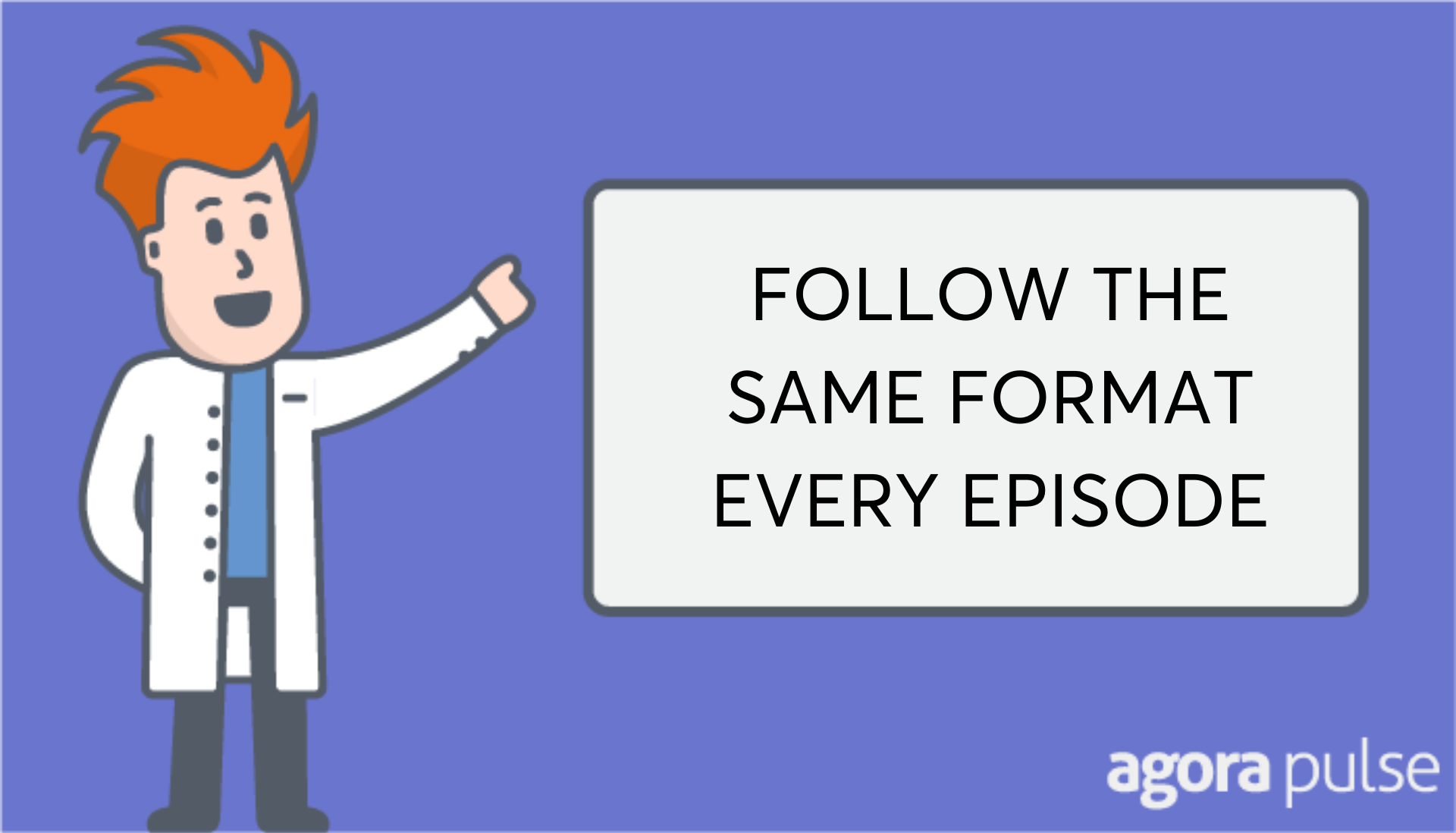 Along with having a consistent schedule for your Facebook live show, having a format you stick to each episode is important.

Think about all of your favorite TV shows, whether sitcoms or dramas. They all tend to have the same format every episode.

This is what a typical sitcom looks like on TV:

The key is having the same format week after week. Your audience will learn to appreciate and expect it.

Viewers have learned this is our format, and we rarely deviate from it.

There will be times you switch things up and add in a new segment. That’s fine, it’s always good to test things. But don’t have every episode look completely different. Doing so will confuse your viewers, and they won’t come back to watch your next episode.

Speaking of segments, divide your Facebook live show into segments before you go live. Plan out what you’re going to talk about. It’s incredibly helpful to have a “Run of Show (RoS) on screen, for your eyes only, during the show.

If you get stuck or forget what’s next, simply refer to it and move forward. The RoS also helps you stick to the preferred length of your show. 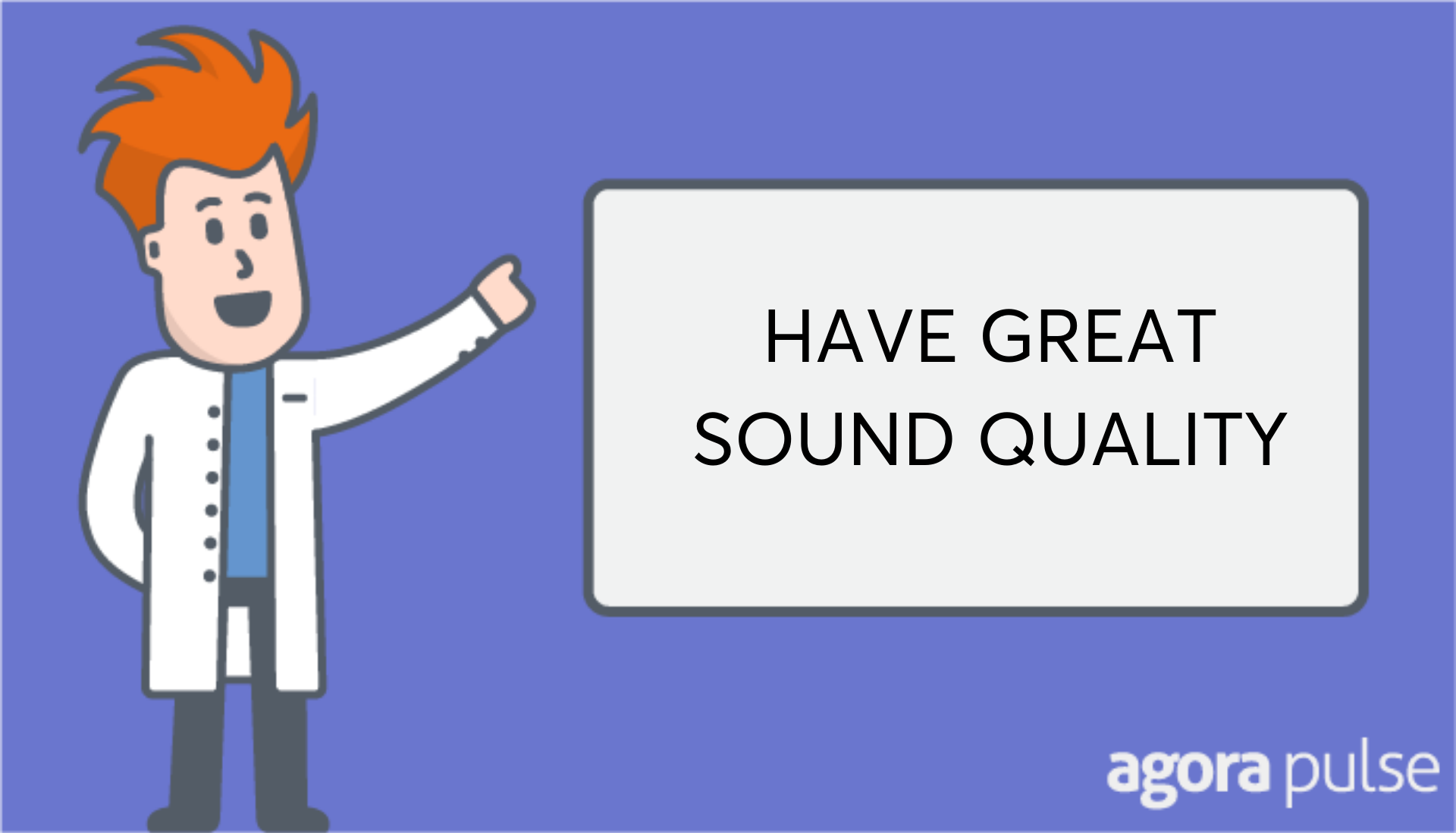 That may sound odd because it’s a live video, but it’s true. Many of those viewing may have your live show playing in a different tab while they get some work done, answer emails, or even play online poker!

Listening only to a live video is common practice, especially in the social media marketing niche, and you need to learn to adjust for this.

Do not (I repeat) DO NOT use your laptop’s built-in microphone for your Facebook live show. The sound quality is worse than the mic on your smartphone.

It tends to echo and picks up every noise you make when you type or tap your desk. The sound quality is just awful.

Yes, you’ll need to spend some money to buy a microphone, but you can find many suitable mics for very little money.

Some microphones I recommend for a Facebook live show:

Be sure to look at the reviews before buying one. I do highly recommend using a scissor arm with your mic, it helps keep it out of the way when you don’t need it, and it won’t pick up the vibrations you might make on your desktop or keyboard.

In addition to getting an external microphone, keep in mind your surroundings. Don’t go live from a coffee shop or sporting event! The background sound will overrun your voice, even with a good mic.

If you have kids, close the door or have them go to another room while you broadcast. If you’re in your garage, be sure the washing machine isn’t on. If you have a loud air conditioning unit in your house/office, turn it off while you go live. If your spot to go live has an echo find a way to either cover the wall with padding or turn yourself a different direction so it doesn’t echo.

The point is to eliminate anything that those people watching might hear while your live show is broadcasting. That’s another reason why I love the Heil PR-40 microphone I listed above, it doesn’t pick up any noise not near the mic. I can even interview someone without headphones and it won’t pick up the audio from my speakers 2 feet away. 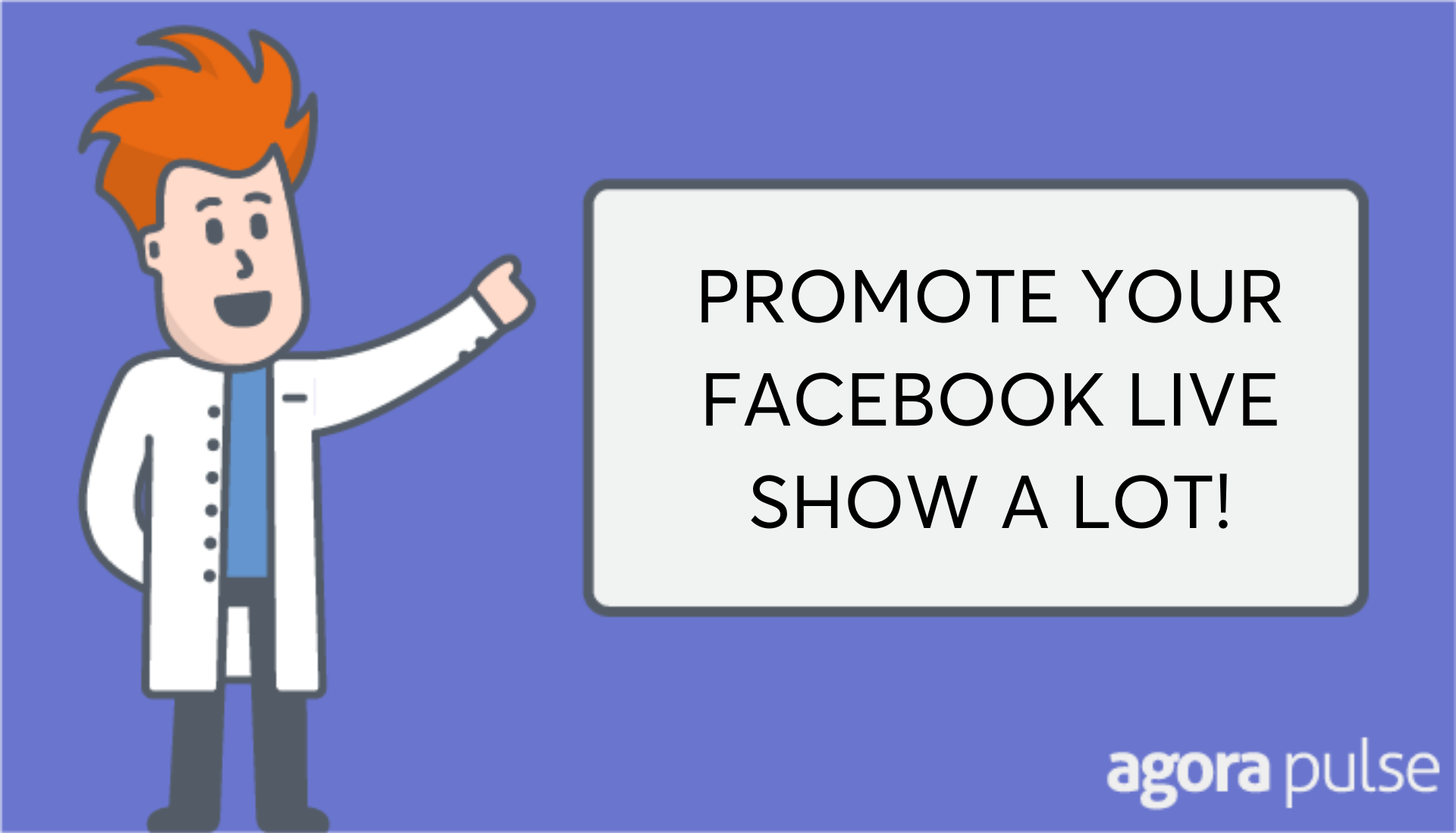 Unlike the old movie “Field of Dreams,” if you build it they likely won’t come to watch your Facebook live show unless you tell them about it.

Even if your Facebook page has hundreds or thousands of followers you’re missing out on getting more viewers if you don’t promote your Facebook live show, and promote it often.

What are the best ways to promote a Facebook live show before it airs?

As you can see, there are many ways to spread the word about your upcoming Facebook live show, and none of those cost money (except maybe an email list provider and chatbot program).

Get into the pattern of doing these things week after week and it will become second nature to you. And those that watch your show will appreciate the reminders. Let’s face it, attention spans are very short these days! 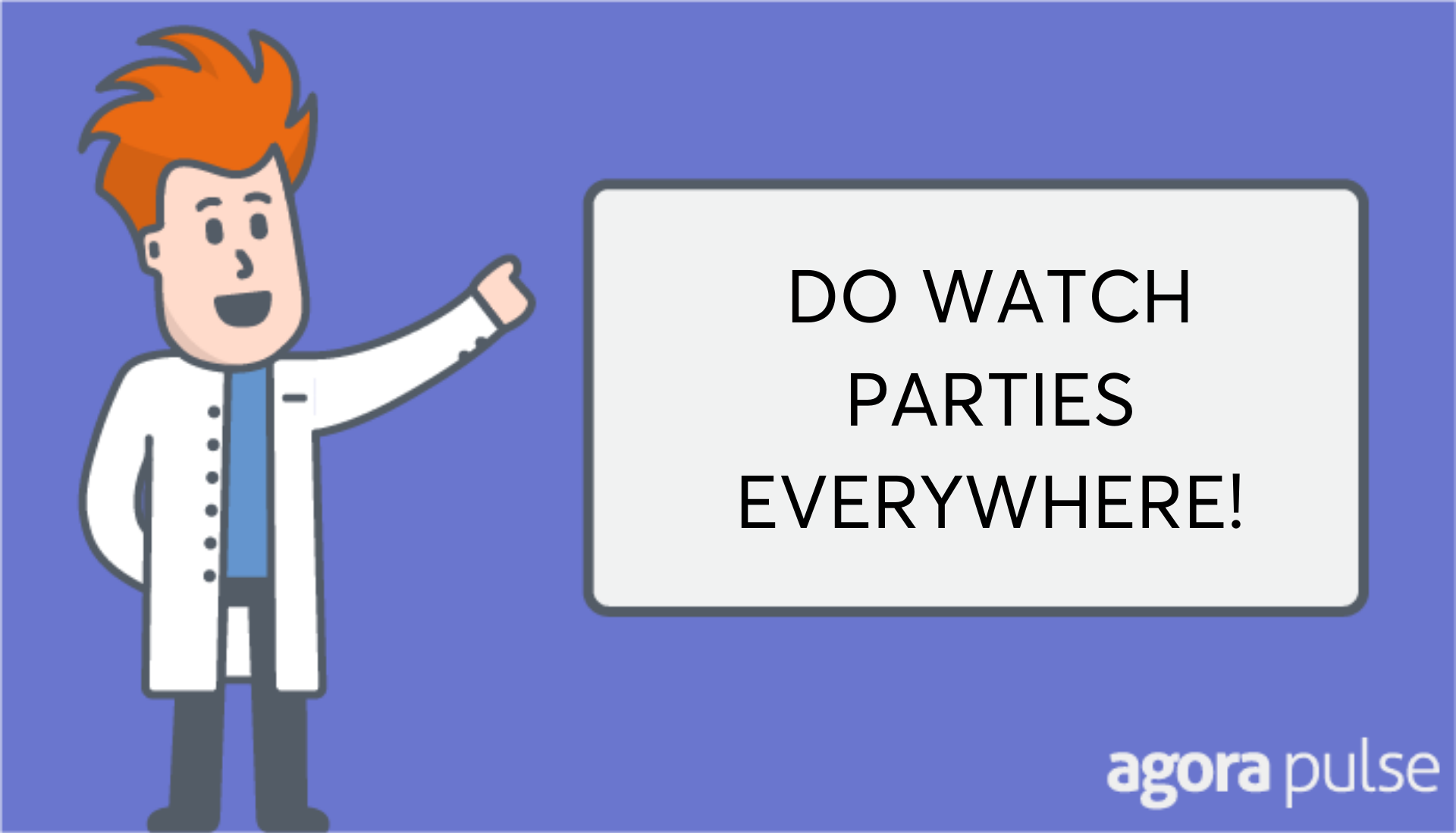 Watch Parties allow Facebook users to share a video onto their profile, pages they admin, events, and groups they are members of to watch the video along with others.

My co-host Owen would also have Watch Parties on his page, his profile, and 1-2 groups.

Keep in mind Facebook, as of writing this, only allows a person to have 4 Watch Parties at once.

Typically, I’d have 4 other tabs open to the schedule Facebook live and text already copied ready to go, so I could start the Watch Party as soon as we went live.

To start a Watch Party click/tap on the “Share” button on the post (these screenshots are via a desktop): 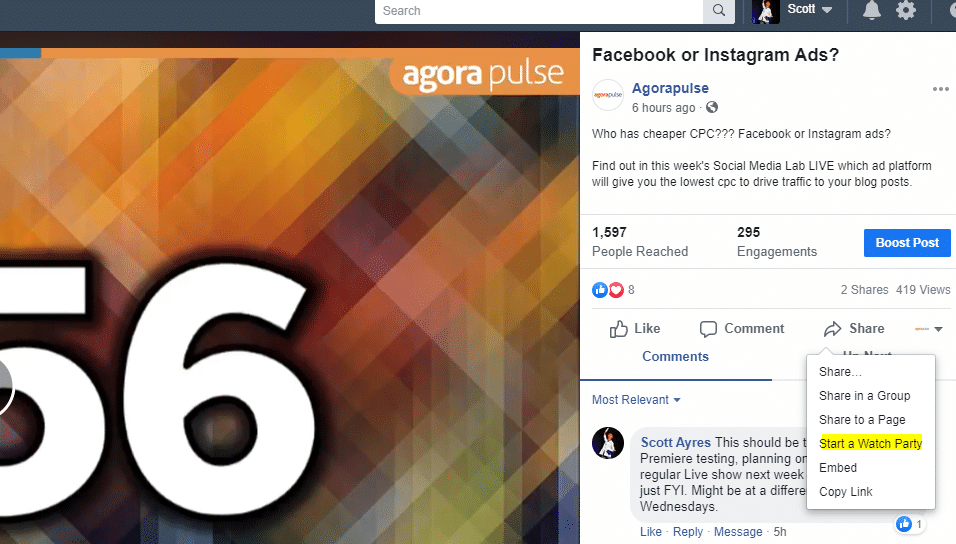 Once you click “Start a Watch Party” you’ll be given options of where you want to start the Watch Party: 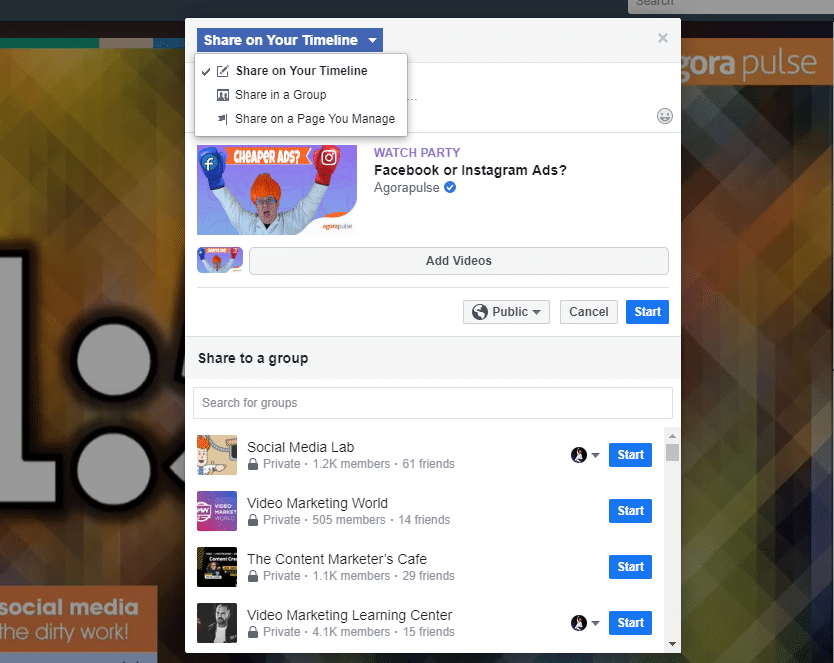 Facebook gives you the options of sharing to your timeline, a group, or a page you manage. It also gives you quick-start options for groups you are a member of.

You can only start one Watch Party at a time, which is why I have four tabs open and ready when we go live.

The great part of the Watch Parties is anyone that hops on to view counts toward your shows viewer count and all video view metrics. We found we could almost double our peak live viewers when we did Watch Parties versus when we didn’t do them.

The downside is any comments made inside the Watch Party will not show on the live video itself and can’t be pulled onto the screen. On a mobile device, someone watching a Watch Party can simply toggle back and forth between the Watch Party comments and Live video comments, however. But you can’t do this on a desktop.

My hope is these tips help you quickly grow your Facebook live show.

Just to recap here are my top 5 tips:

We can’t guarantee overnight success, but doing many of these small (and free) activities will pay off in time.

Be sure to drop a link to your Facebook live show in the comments, and subscribe to the Social Media Lab LIVE show below.