The obsession with vanity metrics is shiftingThis is how Facebook defines Lifetime Post Consumers and ConsumptionTwo problems with Facebook's definitionsFacebook Insights and Excel Spreadsheet don’t match.What does "Clicked anywhere in your post" mean under Consumption?The important takeaways

The obsession with vanity metrics is shiftingThis is how Facebook defines Lifetime Post Consumers and ConsumptionTwo problems with Facebook's definitionsFacebook Insights and Excel Spreadsheet don’t match.What does "Clicked anywhere in your post" mean under Consumption?The important takeaways

I didn’t either – until I decided to dig deep again into the Facebook data.

I’ll admit that I always had a love-hate relationship with numbers. But hey, it’s precisely my quirky interest that you get to read this post!

And I assure you that it’s going to help you work around with Facebook metrics more easily.

The obsession with vanity metrics is shifting

I lost count of how many campaigns I’ve developed already; some clients were adamant about reporting vanity metrics like post likes and People Talking About This (PTAT) while others were more receptive to tracking the less flashy but more useful metrics.

The good news is that an increasing number of them are more open and receptive towards tracking the right metrics. 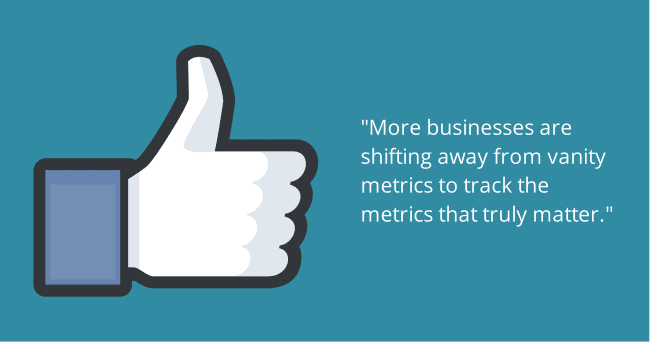 For example, when evaluating the success of a Facebook content strategy, I highly recommend my clients and readers to look at the post consumption numbers instead of engagement or reach, and of course – the much coveted consumer-retention metric that I wrote a detailed guide about 2 weeks ago.

The other key aspect of measuring your social media ROI requires you to know exactly what you are tracking.

For instance, what does post consumer really mean? Most people think it includes anyone who has liked, commented, and shared your post. But do you know what else is also included?

Knowing exactly what is included is important so that when you see these numbers increase, you can report them to your management team and show them exactly what has improved.

So without further delay, let’s dive deep into these 2 metrics.

To make sure that you keep up with me, please find the mentioned metrics in the following location:

First, let’s look at how Facebook defines these 2 metrics.

I want to make the rest of this article easier for you to understand so I’m going to drop the term “Post Consumers” and use only “Post Consumption”.

Looking back at Facebook’s definitions of “Post Consumption”, there are 2 key problems.

First, it is not clear what “clicked anywhere in your post” means, especially since Facebook defines Lifetime Engaged Users in the same manner.

Lifetime Engaged Users
Lifetime: The number of people who clicked anywhere in your posts. (Unique Users) 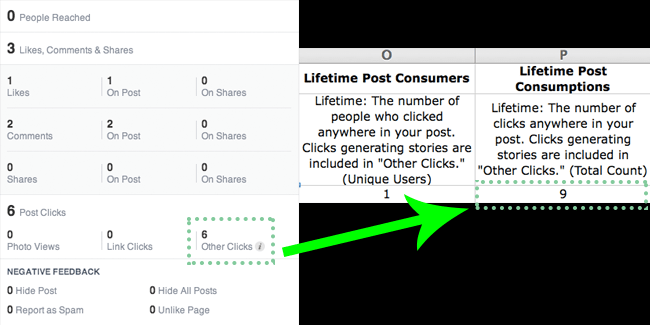 So just what is happening?

The second problem is a little more easily explained than the first.

When you refer to Facebook’s definition of “Post Consumption” in the Excel Spreadsheet, they said that “Clicks generating stories are included in “other clicks”.”

Now, go to your Facebook Insights. if you hover your mouse over the “i” icon located beside “Other Clicks”, you will see this: 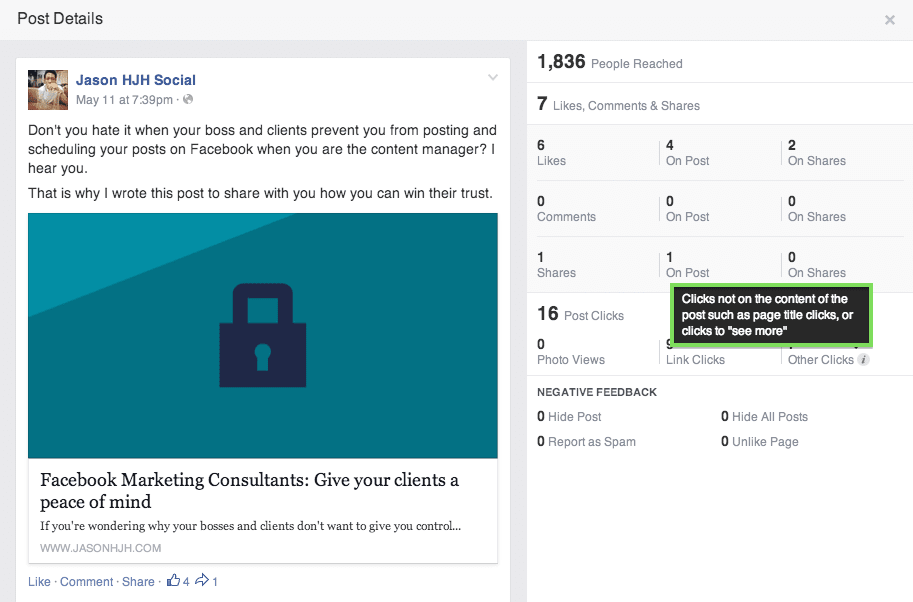 But what is the significance of this piece of information?

This piece of information tells us that the “Other Clicks” you see in Facebook web Insights do not include “clicks generating stories”, unlike what you see in your excel spreadsheet.

In other words, Facebook shows both data separately in web Insights, while it combines both of them in the downloadable excel spreadsheet.

So, if you refer to “Lifetime Post Consumption” inside your excel spreadsheet, it is equal to #. of (likes, comments, and shares) + #. of other clicks + (#. of photo views or #. of video plays).

With this, the second problem is resolved! Let’s go to back to the first.

What does “Clicked anywhere in your post” mean under Consumption?

To understand this, i will borrow the findings of Ben Donkor, from an article he wrote last September.

Some of the things are outdated because Facebook has revamped how it displays Likes, Comments, and Shares to Page admins in Facebook web Insights. 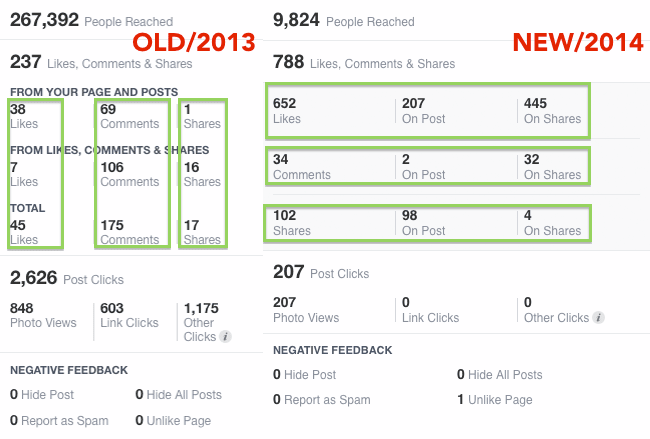 Beyond these cosmetic differences, there are also a few critical changes, and one of them affects how “Lifetime Post Consumption” is reported.

In any case, Ben’s explanation of what “clicked anywhere in your post” means under post consumption is still (partially) valid.

The valid part is that “Lifetime Post Consumption” measures the number of clicks anywhere within your original post as you see in the image above, excluding likes on comments, replies to comments, etc. that are found below the original post 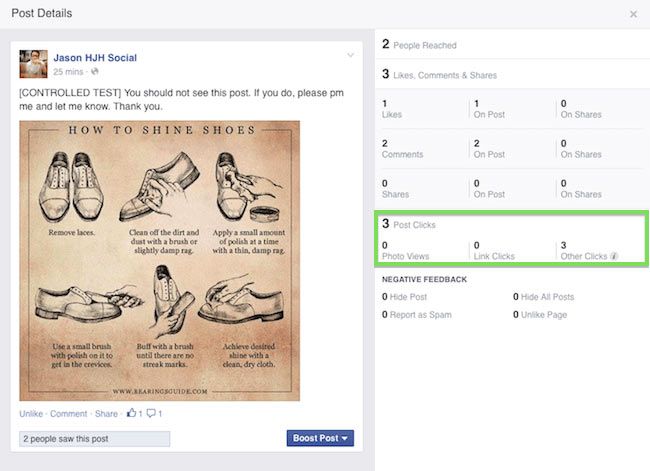 The part of Ben’s explanation that has become invalid is that now, “Lifetime Post Consumption” also includes replies to comments.

This requires a two-step explanation:

First, under the old Facebook web Insights format, replies to comments were ignored and not included in “Lifetime Post Consumption”

But under the new Facebook web Insights format, replies to comments are included as part of the comment count (see image below) 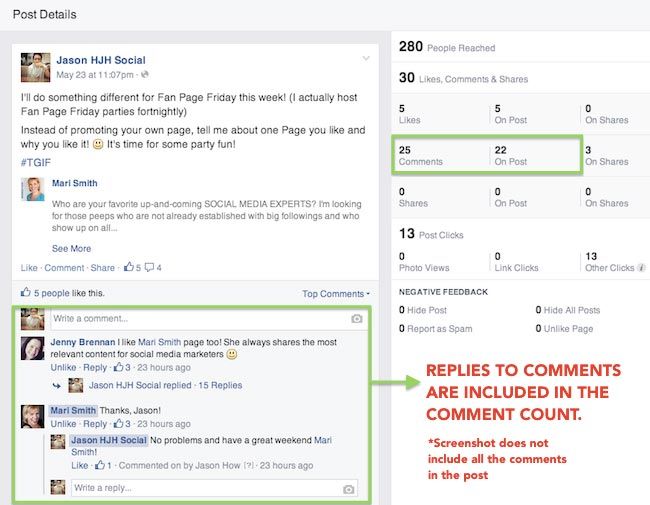 However, likes on Facebook comments replies continue to be excluded and do not contribute to “Lifetime Post Consumption”

Second, remember earlier when I said that likes, comments, and shares are added to “Lifetime Post Consumption” inside your excel spreadsheet but kept separate on your Facebook web Insights?

Well, this explains why replies to comments, which are now included in the comment count in Facebook web Insights, are also part of the “Lifetime Post Consumption” metric found in your excel spreadsheet.

If all that explanation confused you, then just remember these short points below: