If you ask my team, the advertising job is mine. First, I love playing with ads as you get immediate feedback about what works and what doesn’t (no need to wait 6 months to see if your content or SEO strategy worked). It’s instantly fulfilling!

Second, ads cost money and the stage we’re at, I want to keep control over that spend and make sure that nothing goes bananas.

But more importantly, paid marketing is probably the best way to scale our business in the long run and I want to make sure I know enough about it when the time comes to hire someone else to do that for us.

Most of my ad campaigns focus on retargeting our audience (website visitors and free trial users) but some of them work to attract new users who have never heard about us.

These latter ones are the toughest. These people have never heard about us and hard to convert.

It all started from a smart idea!

Scaling your advertising effort is tough. The ideal scenario is when you can target an evergreen audience that keeps renewing every month.  That’s why retargeting is so efficient.

But when you want to attract new people, you don’t have that.  You need to have a VERY large audience to target (not to exhaust it too fast) with your campaign. In our industry (social media management), coming up with a very large audience is not easy, especially if you want a qualified audience.

This is where my smart idea kicked in.

One of the blog posts that leads the best traffic to our site is a blog post called “7 reasons not to use Hootsuite.” It’s a great piece of content and we are listed as a good alternative. The traffic we get from that blog post is highly qualified and converts very well. Plus we’re not the author, so it’s credible!

But it gets the traffic it gets organically, and despite ranking very high on Google for key terms such as “Hootsuite reviews” or “Hootsuite alternatives,” it only gets so much organic traffic and we can’t scale that.

Here’s me looking at our data and thinking: What if I could send more traffic to that blog post and increase its potential for us? 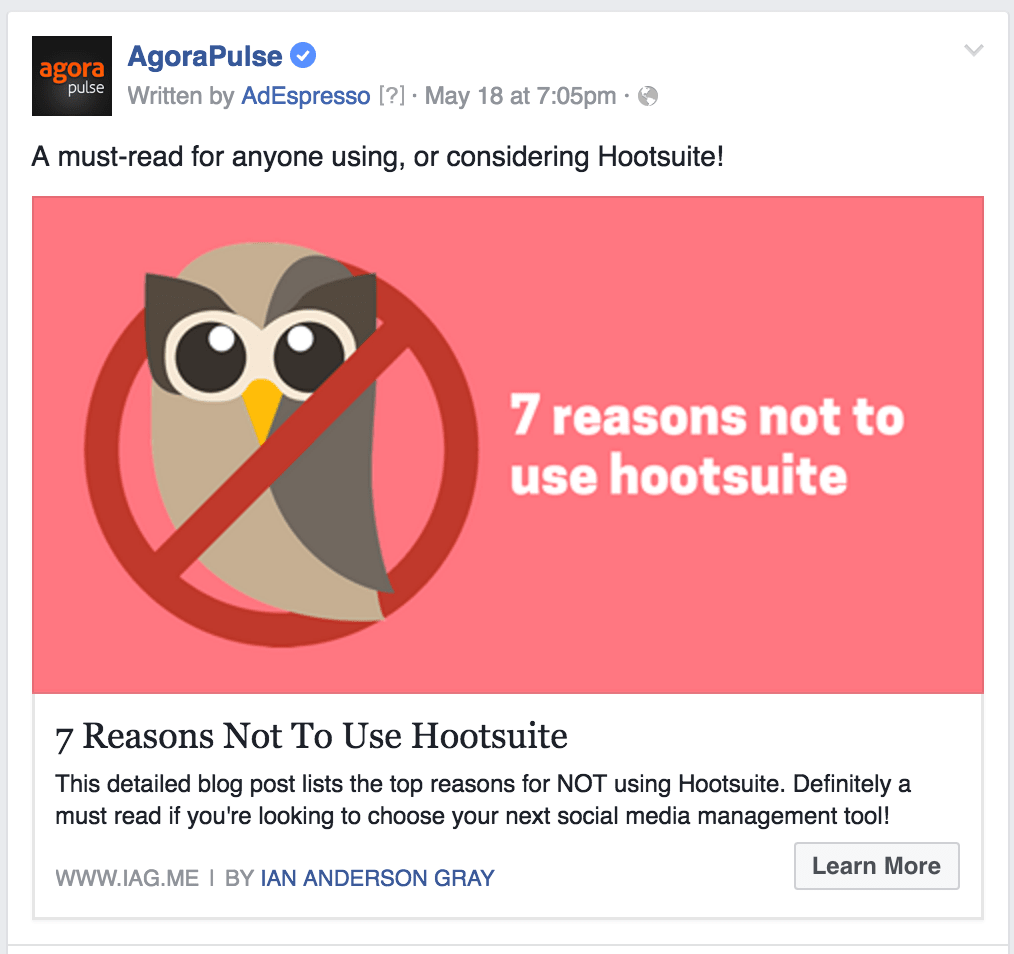 How could I find out if a smart idea was indeed smart?

I started the ad and let it run for a day or two. I was curious how the target audience would react to a message that may be perceived as “competitor bashing,” but as we were not the author of that post, I was not sure how it would be received. 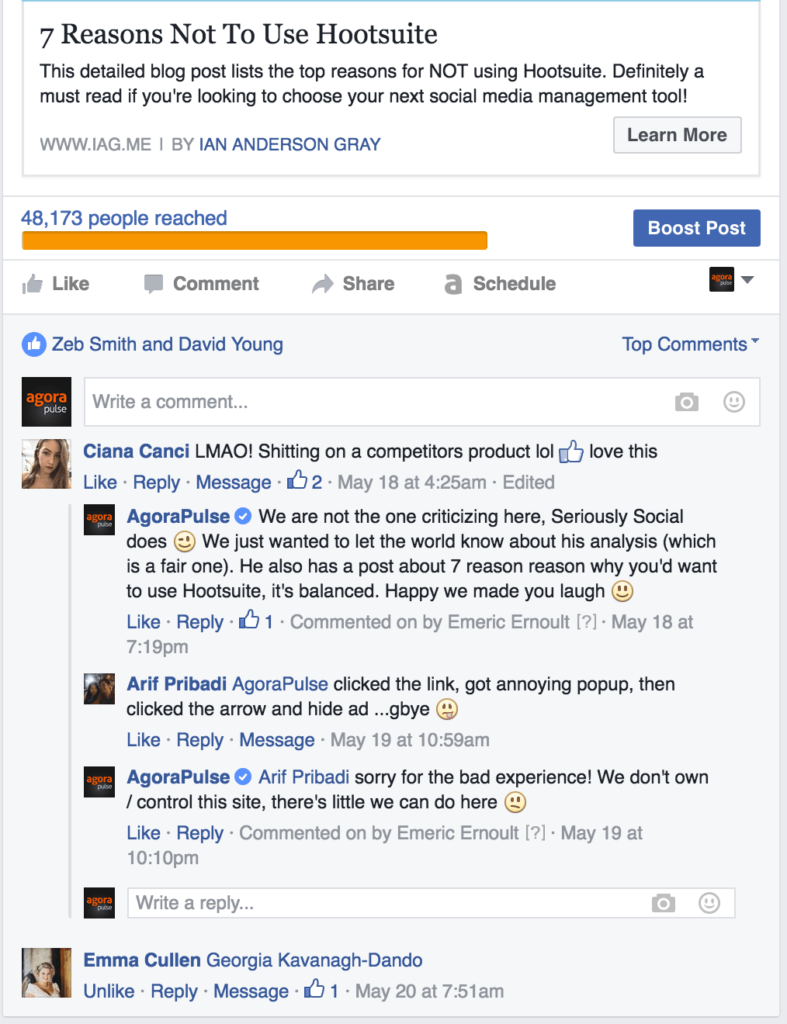 Looking at the comments there, I found nothing alarming. Apparently we made the first one laugh and we replied accordingly. The second commenter had issue with the pop-up on the site (not on our side) and the last one even mentioned a friend who, after checking out, appeared to be a social media manager — a potential prospect for us.

Looking at Facebook only, the ad was doing OK enough to continue the test.

On my Instagram ad campaign I searched but found no way to check comments. There’s not even a native solution for that. I felt totally blind (and so are you if you’re running Instagram ads!).

Thanks to our awesome tech team, I had early access to Agorapulse’s Instagram ad comment monitoring shortly after. Finally, I was able to see these comments Let me tell you what I found.

How I discovered my disastrous results.

I plugged in our Instagram ad comment monitoring (read here to see how to do that) and after an hour, I got all the comments back in my inbox.

This is what I saw: 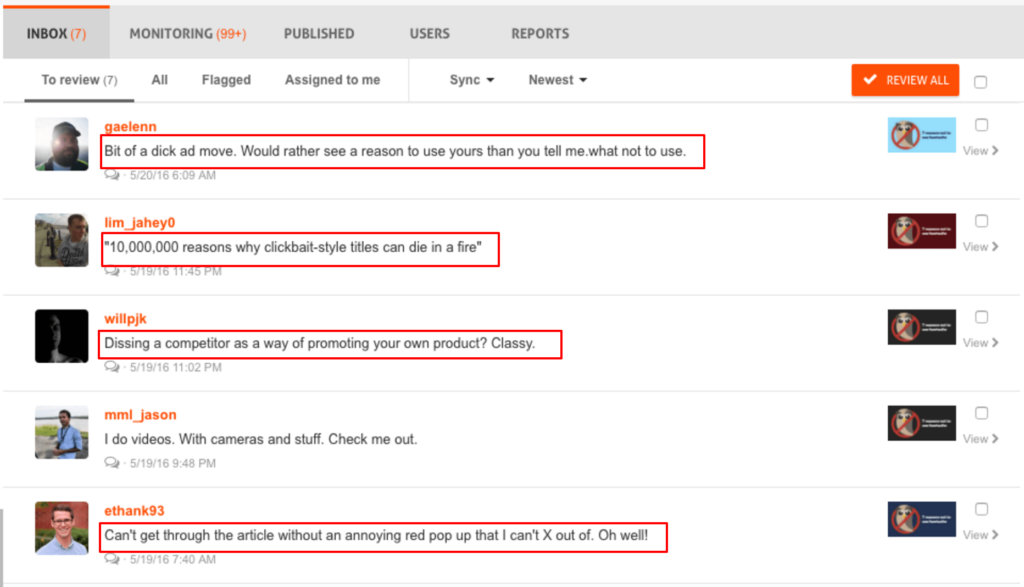 OMG. The level of negativity here really exceeds (to say the least) what I saw on Facebook.

Not only users tend to engage more with ads on Instagram (I had 10 times more comments on Instagram despite fewer impressions there), but they also tend to react more when they are upset by your ad based on this example!

I really don’t want my brand to be seen as what these users are describing, so even if that ad may eventually be a good idea on the marketing side (clicks and conversions were not bad at all at that stage), I’d rather not run it if it gives us a bad image.

And those comments really made me feel like I was doing something bad. I stopped the ad.

But without that new Instagram ad comment feature Agorapulse had just released, I would have probably let this one run for months, hurting my brand without a clue of what was actually happening!

What I will do from now on

The first thing I’ve learned is that what may seem like a good idea from a pure marketing perspective may not be a good idea for your brand.

The second thing is that Facebook ads and Instagram ads are two different beasts and should definitely be treated as such.

The third is that not monitoring the comments on our ads is a big non-no, but that I knew already 😉

The fourth is that if I want to drive traffic to that blog post (and I still want to do so), I shouldn’t be the brand doing this! I’m pretty darn sure that if that ad came from the blogger himself, the comments would not have been so bad. So I may try that again but not using our page / accounts as the initiator of the ad but do it with the author himself if he agrees so.

I hope my story will help you moving forward. Let me know what you think!