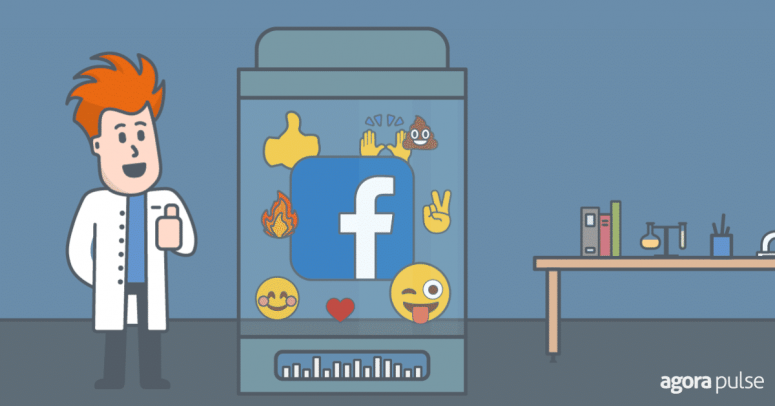 Yes Another Experiment on Emojis!

Emojis have become quite a popular subject matter here on the Social Media Lab.

The popularity of that post has led to running a few more emoji experiments — my podcast co-host Richard just LOVES talking about emojis!

For reference check out these past experiments:

If there is actual marketing value in using Facebook emojis businesses should be leveraging them.  Lord knows every little bit helps when it comes to Facebook Reach.

I did a bit of research to find a baseline on what marketing results from others may have found using emojis, but it was all very dated. Anything 2016 or older is not worth mentioning here, although there were some great studies that showed how great the usage of emojis in marketing is and how it increased engagement.

While I won’t send you links to old blog posts with outdated data I will use this past information to form my hypothesis on the impact emojis have on Facebook posts: 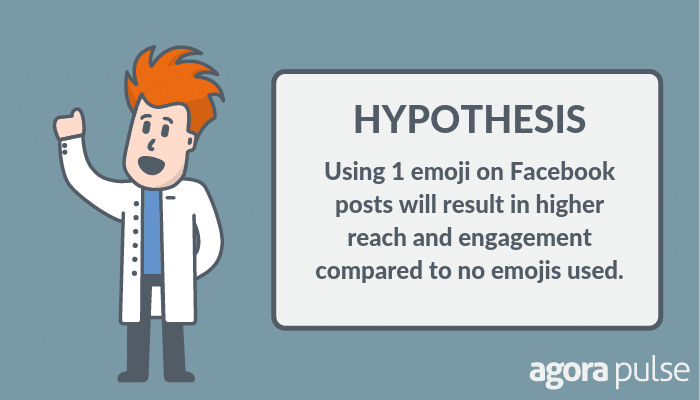 Everything from the past that I read indicates that this hypothesis should be true — maybe I’ll get one right this time!

To run this experiment I used 2 different Facebook pages as our testing ground.

The Schedule for the Experiment

I used Agorapulse to schedule new posts to both pages, all being link posts.

The slots labeled “With Emoji” or “Without Emoji” were used for this test.

The Emojis Used for the Experiment

When it comes to the emojis I kept this test simple, as our goal is to see if emojis changed the metrics not necessarily how many are ideal.

So I simply added 1 emoji to the beginning of the posts for testing. The emojis varied as well and I attempted to have them correlate to the subject of the post. 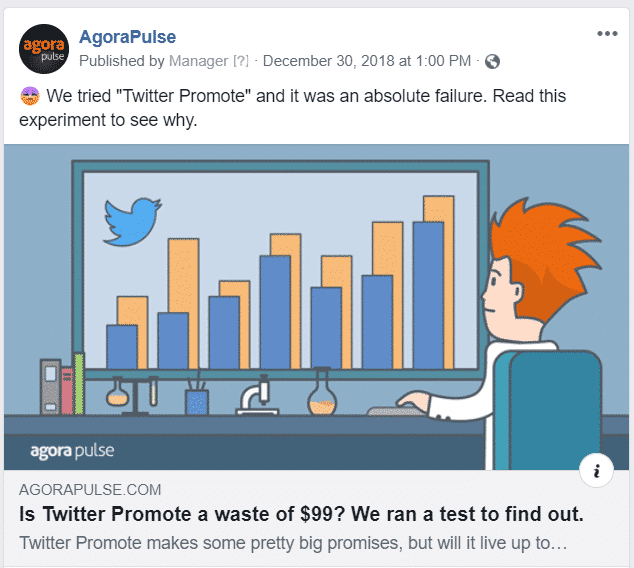 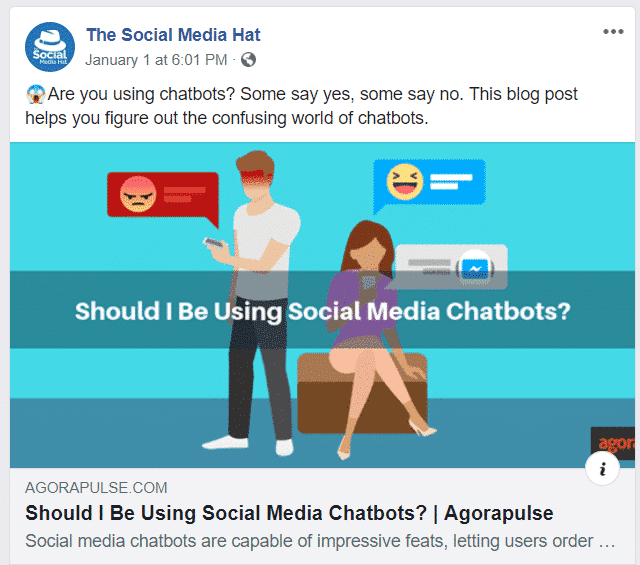 After the posts had gone live I waited a week to pull the data to ensure we had squeezed all of the Reach juice out of it we could!

When the test was over I ended up with 20 posts of each type for the Social Media Hat page, and 16 for the Agorapulse page. Giving us 36 posts across 2 established and engaged business pages to draw data from.

Grabbing the data for this was SO easy using Agorapulse. Instead of having to go over to Facebook and wade through the confusing Insights I simply clicked on a post on the Calendar, pretty easy to see the posts with emojis! 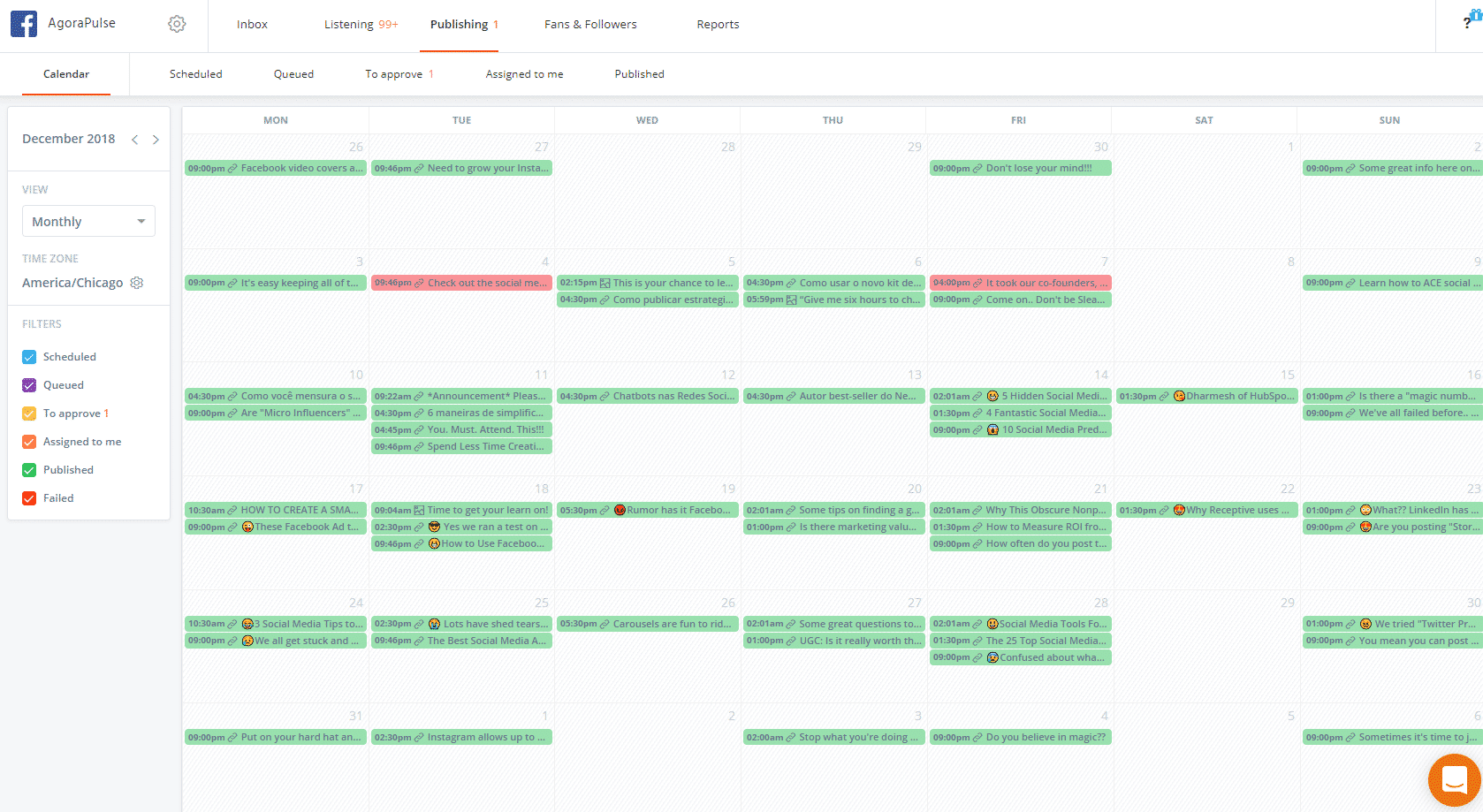 Doing so opens up a lightbox with all of the data I needed for this study:

For this experiment, I simply gathered the Impressions, Engagement, and Clicks per post and slapped into a spreadsheet and averaged them out per page and combined.

Here’s how the data pans out: 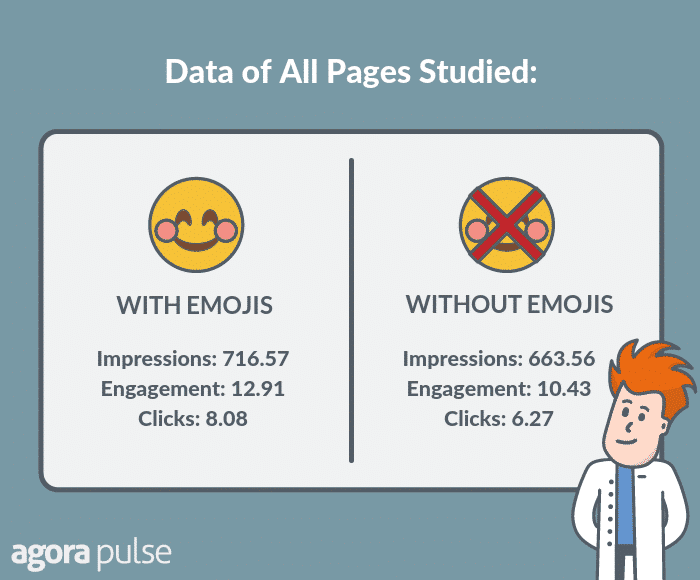 According to our data Facebook posts with an emoji not only got more Impressions but also Engagement and Clicks. Which makes sense if you know much about the Facebook algorithm.

More engagement should push up Impressions (aka Reach).

The differences between with emojis and without reveals an obvious advantage: 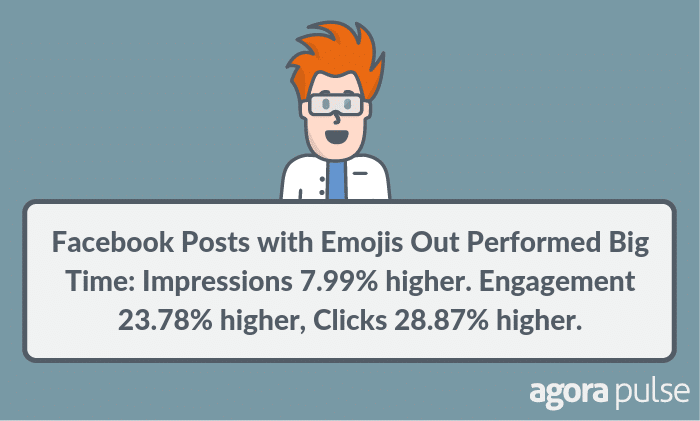 My hypothesis was actually correct — even squirrels find a nut every now and then!

While I wouldn’t recommend using an emoji in every single post, there is solid data here that tells me engagement, and thus Reach, can be improved by adding one.

*Grab some more information about emojis on Facebook by watching our Social Media Lab LIVE episode below: