Twitter Rules: What's New, What's Not (and Why it Matters)How Does This Impact Tools That Repeat Content?What Are Some Decent Alternatives to Meet Edgar and SmarterQueue?AgorapulseBufferCoScheduleSocialOomph

Twitter Rules: What's New, What's Not (and Why it Matters)How Does This Impact Tools That Repeat Content?What Are Some Decent Alternatives to Meet Edgar and SmarterQueue?AgorapulseBufferCoScheduleSocialOomph

You may have heard about the news lately: everyone in social media is crying about the end of the ability to repeat content on Twitter.

Repeating content is probably one of the (if not the only) reason users rushed to tools like Meet Edgar and SmarterQueue. Needless to say, there’s a lot of anxiety and frustration about these kinds of publishing tools.

But is this announcement really news?

Let’s look at the situation with a little more context.

Twitter Rules: What’s New, What’s Not (and Why it Matters)

They justified this announcement by their willingness to fight spam and enforce their rules more strictly.

Before this blog post, tons of users with multiple Twitter accounts were regularly posting the same tweet on their accounts using various tools. Even Twitter’s own tool, TweetDeck, offered this feature.

Posting identical Tweets over multiple hours or days, or scheduling duplicate content for future publication, is still a violation of our rules.

Dozens and dozens of publishing recycling tools like Edgar and SmarterQueue soon announced that they’ve discontinued their “repeat” options for Twitter based on these “new” rules.

But this is where things get interesting.

These rules are NOT new at all.

Actually, they’ve been around since the early days of Twitter. Here’s a screenshot of the Twitter rules in July 2010: 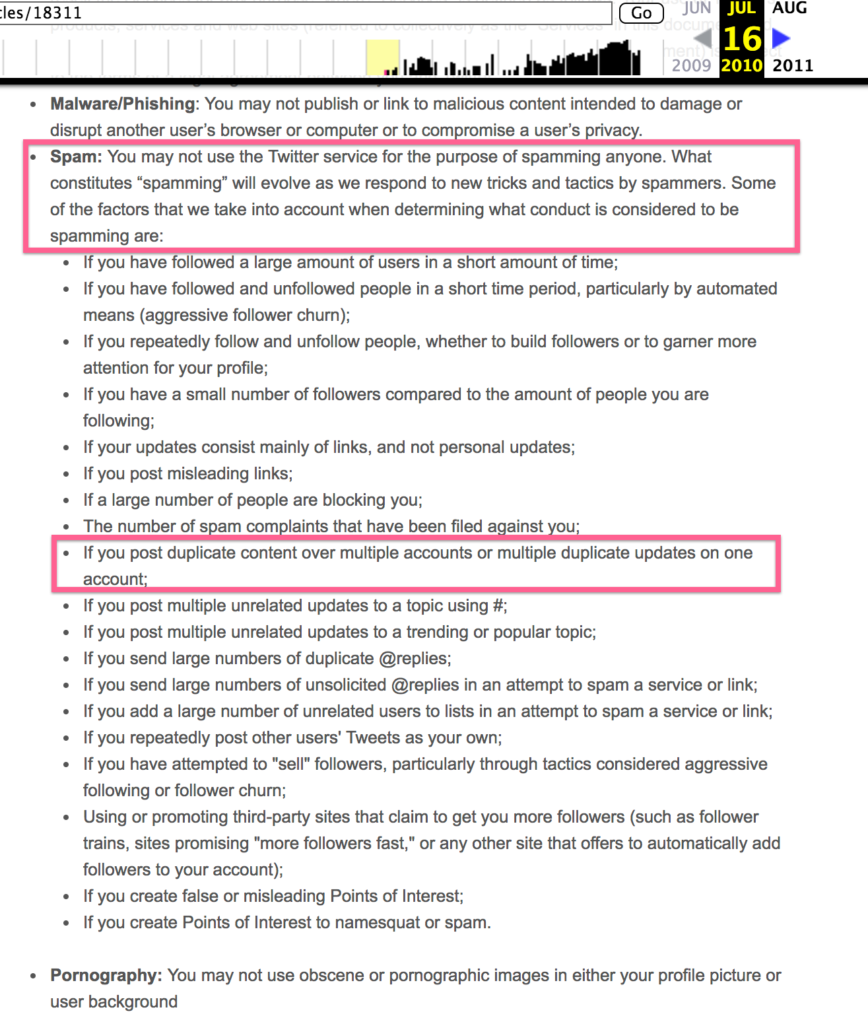 As you can see yourself, the rules have always contained that same wording.

Truth be told — I was not fully aware of this myself until I used the Wayback Machine.

The rules have been around for a while — it’s just now that Twitter has decided to enforce them.

It feels pretty awkward for a large social network like Twitter to have had a rule like this one for so long, letting tools proliferate despite being solely built to repeat tweets and do or say nothing about it. Edgar alone had 7,000 clients a year ago. SocialOoomph probably has tens of thousands of users thanks to its free plan.

The disturbing thing is that the exact same scenario applied to automatic DMs (direct messages) or tools that allow to follow/unfollow hundreds of users per week automatically. These behaviors have also been against the rules since 2010 as I read them. Still, as of today, hundreds of tools offer auto DMs and auto follow/unfollow features.

If that’s not confusing for the average, non-spamming Twitter user, I wonder what is!

You got the background. Now, let’s look at how tools that focused on repeating content are affected.

Unfortunately for their users, Edgar has decided to shut down the repeat feature entirely. They are working on an alternative but there’s no release date.

Whatever alternative solution they come up with, it will never be the seamless, “set it and forget it” function that attracted so many users.

As for SmarterQueue, they chose a different path. They didn’t decide to shut down their repeat feature– instead, they decided to tweak it in a pretty unusual way.

They’re claiming that repeating a tweet is not OK but retweeting it over and over again is fine.

I don’t know about you but I don’t feel like retweeting my own tweets again and again. It would feel like sharing my own posts on Facebook or LinkedIn. Weird.

I would be very worried that Twitter would consider these massive retweets as “duplicates” as well eventually.

Long story short, whatever solution they’ve chosen to implement, the initial value proposition is seriously limited now. This is why you should consider alternatives.

What Are Some Decent Alternatives to Meet Edgar and SmarterQueue?

Time to take a look at some alternatives!

Agorapulse is a comprehensive social media management tool. Unlike Edgar, SmarterQueue, and all the alternatives listed below, it goes beyond offering publishing features. It also provides full listening capabilities, engagement management, and reporting.

If you need to reply to the comments and private messages you receive on your Facebook pages, Twitter profiles, and Instagram accounts, it’s one of the best solutions out there according to thousands of user reviews.

But as we’re writing this to present alternatives to Edgar and SmarterQueue, let’s look at the features that make Agorapulse a serious contender.

Agorapulse was the first tool to display a full preview of your content for each social network– a great way to make sure your post will look good once published! You can even see if your tweet will contain a Twitter card on Twitter —  no other tool offers that level of preview. 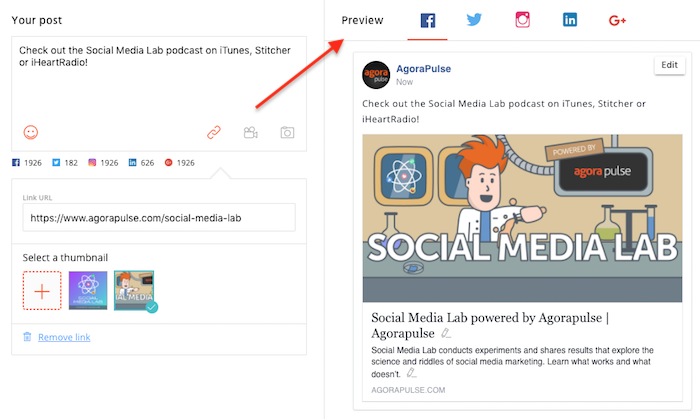 The scheduling options offered by Agorapulse let you repeat your post at regular intervals or add additional schedule slots. Useful for events that repeat on a regular basis, like a weekly Twitter chat or a monthly Facebook Live!

If you want to stay away from the Twitter police, just make sure you don’t abuse the system and only use this feature on Twitter in moderation (the more time between the repetitions, the better)! 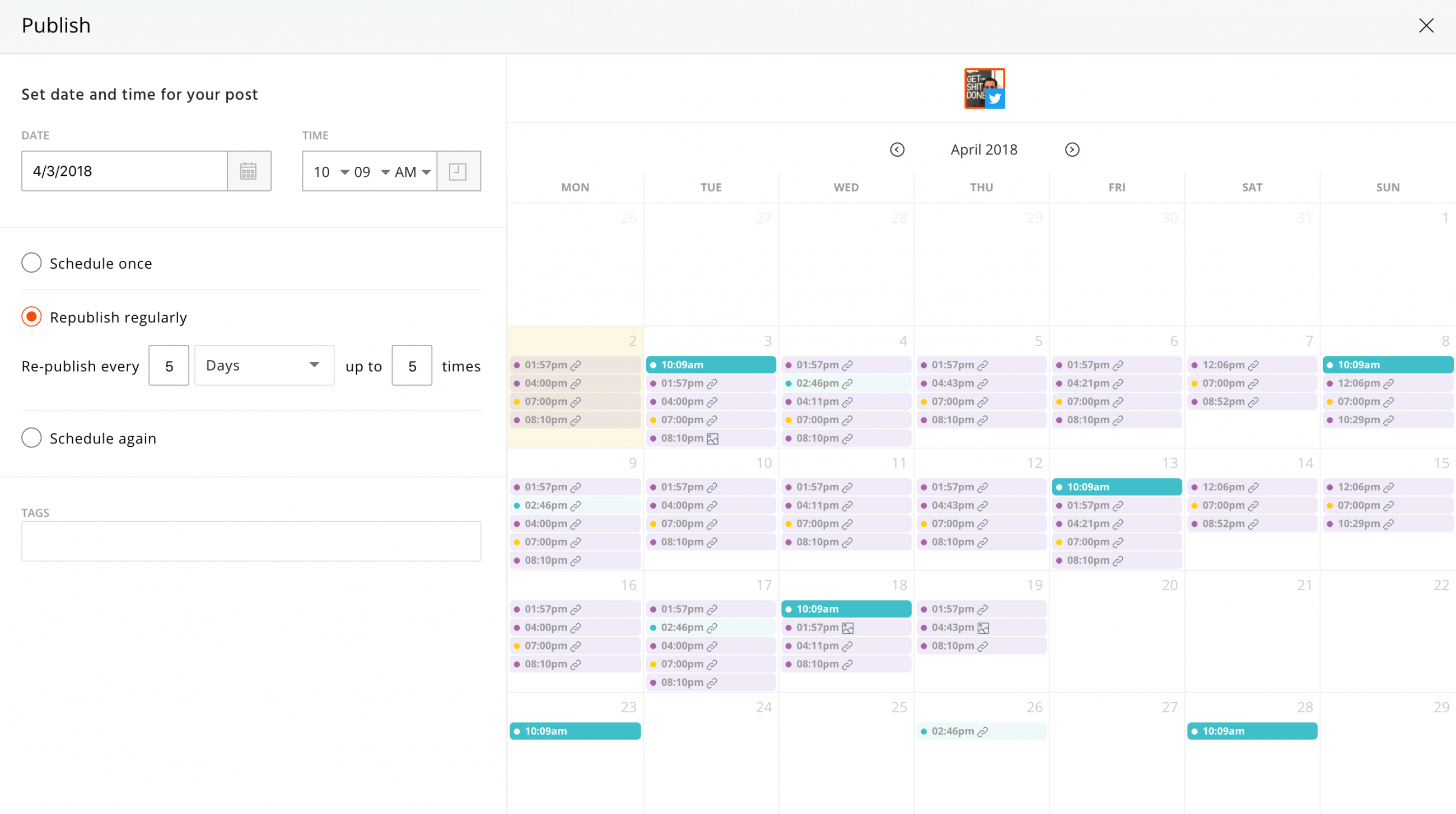 This feature is best for people that queue content and need to maintain a good mix of topics without worrying about the order their tweets were entered into the system.

With queue categories, you create topics that represent the type of content you like to post on a regular basis, define time slots associated with these topics, and add your content in each topic (category) so they’re being posted at the right time while maintaining a balance in your editorial calendar.

For example, based on the the categories below, if you queue 10 podcast-related posts at once, they will be spread other the week and published only once a day at 7PM. This is a big time-saving feature for users who prefer to queue content rather than schedule it. 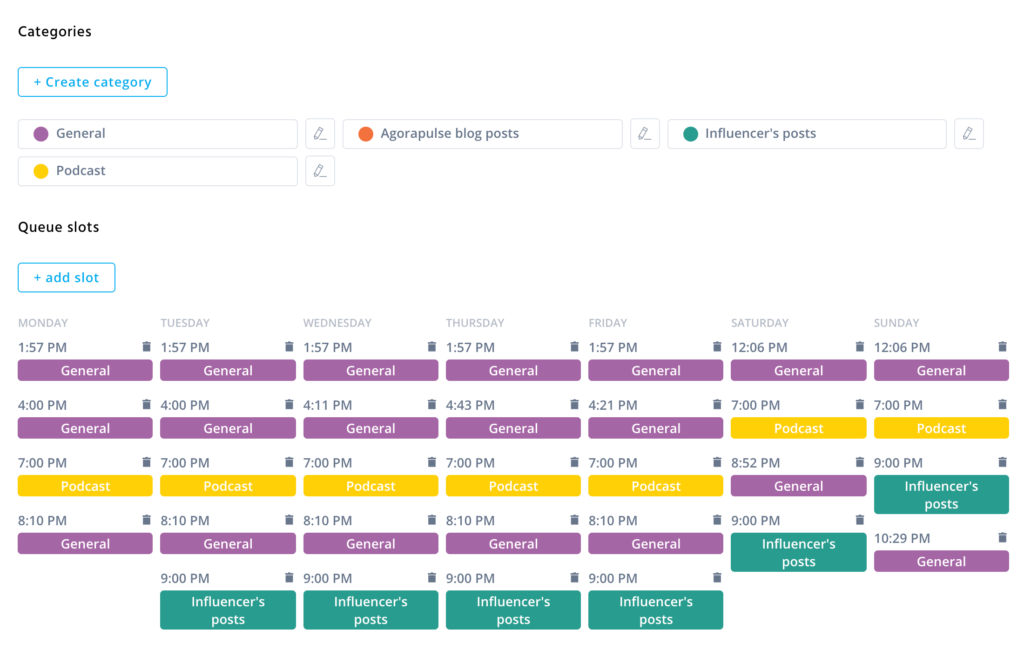 Once you hit “queue” on the first step of the Agorapulse publisher, you get to a second step with the ability to queue “last” or “next.” Pick the right queue category for your content (see above) and decide if you want to add your post to the queue again after it’s been published.

This is exactly like what Edgar and SmarterQueue used to do.

To make sure this feature cannot be used to spam the Twitter feed, we’ve added a mandatory time gap of 24 hours between each repetition. You can increase the time gap in your settings– we recommend using the 7-day time gap for now.

To help you stay within the spirit of the Twitter Terms of Service (keep in mind that they don’t like repetition — even though they’ve let you (reasonably) repeat content for the last 8 years…), we’re working on a new feature that will allow you to create several variations of the same tweet. This new feature will be announced in the coming weeks. For now, make sure you’re not repeating your tweets too often.

For social networks other than Twitter, there’s no mandatory repeated content limit but always be mindful of your audience. Don’t repeat your posts and links too often and make sure you only do it for content that’s both evergreen and high quality. Repeating content makes no sense if it’s low value or time-sensitive. 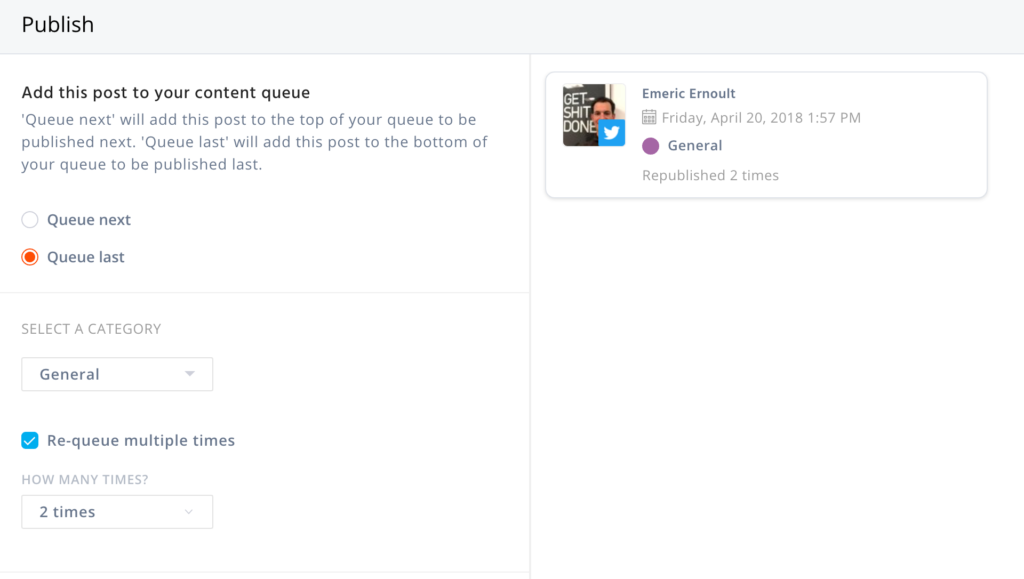 Unlike many other tools, Agorapulse allows you to bulk upload up to a 100 pieces of content at once using a pre-populated CSV file, including photos (great for Instagram) and content from any RSS feed! If you like curating content, the RSS bulk publishing option will save you hours of work every month. 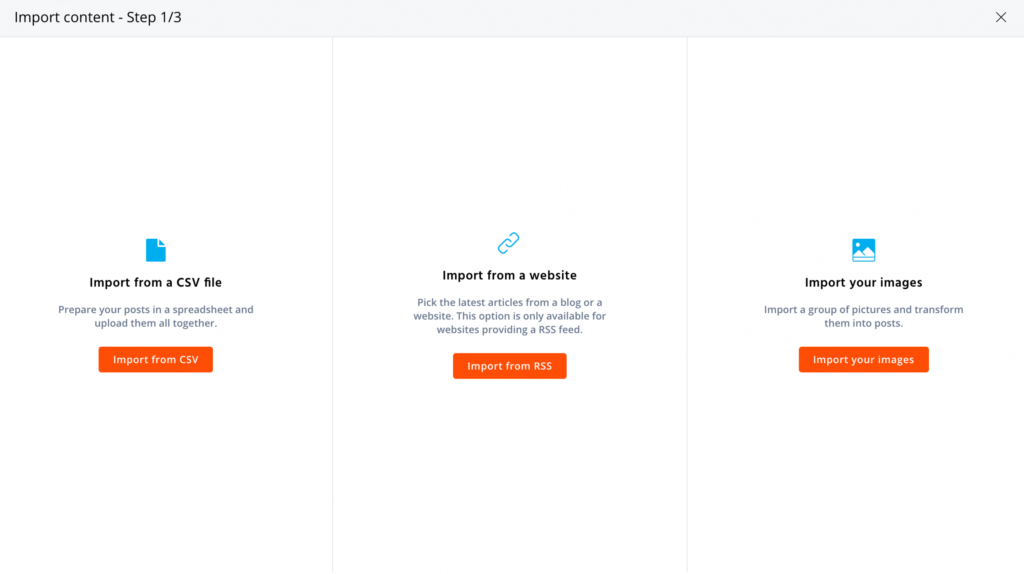 In a recent statement, Buffer stated its plans to “help you create unique content for multiple Twitter posts in the same composer session and are exploring ways to help you easily schedule retweets for related accounts.”

In the meantime, Pro and Business plan subscribers can make use of the Re-Buffer feature.

Simply go into your “Posts” section of your “Analytics” tab. Find the tweet you want to post again and click the “Re-Buffer” button to the right of it.

This isn’t as easy as an “auto-repeat” option, but if your needs are solely based on publishing content and you don’t need a full-blown social media management tool– Buffer alone doesn’t let you reply to posts without purchasing Buffer Reply, an additional tool,– then you may want to consider it as an alternative.

CoSchedule, a blog management and social sharing tool, sent this message to users about its ReQueue feature soon after the discovery of the Twitter rule.

“With ReQueue, all social messages will wait 14 days before sending out again. This way we can be sure to never spam your audience with any of your social profiles. Because of this, ReQueue messages are permitted through Twitter’s changes.”

Not sure how this will work because the tool only schedules up to 14 days of content at one time.

While ReQueue is included in the small, “Essential” plan ($49/mo), it’s considered an add-on for larger plans, with the additional cost running from $50/mo extra for the Growth plan to $300/mo extra for the Enterprise plan.

If you have a significant budget (CoSchedule is the most expensive option for a tool that only focuses on publishing when you want the ReQueue option) and are OK with a 2-week time gap between each repetition, it’s worth trying.

SocialOomph has always been a pioneer when it comes to content recycling. Despite a user interface that’s complicated to use, it does the job.

Interestingly enough, it has reacted to the Twitter apocalypse in an unexpected way– it’s now forcing a “duplicate content blackout period” of 24 hours. In other words, you won’t be able to repeat the same tweet twice in 24 hours.

Is a 24-hour time gap between two pieces of identical content good enough for Twitter? It remains to be seen.

How do you plan to keep your flow of content going without getting your wrist slapped by Twitter? Let us know in the comments!