Before we look at what the future may look like, let’s have a look at where we’ve been.The problem lies in our limited ability to consume more content4 ideas to cut through information densitySo by now you're probably asking yourself, what's the 4th digital revolution?

Before we look at what the future may look like, let’s have a look at where we’ve been.The problem lies in our limited ability to consume more content4 ideas to cut through information densitySo by now you're probably asking yourself, what's the 4th digital revolution?

In March, the whole Agorapulse team traveled to San Diego on a mission to attend the best sessions at Social Media Marketing World, compile notes of the key takeaways and share them with you. We’ve created 20 blog posts from those notes, here’s one of them!

Session Title: The Future of Social Media: What Businesses Need to Know

Speaker: Mark Schaefer, Founder & Editor of the Social Media blog Grow, Host of the podcast The Marketing Companion (we love that podcast!) and author or contributor to many great Social Media books, including Social Media Explained, Return on Influence and The Tao of Twitter. All great reads.

Why you should read this session’s transcript: The social media marketing landscape is evolving at a rapid pace. If you want to keep up with these changes and stay ahead of the game of content and social to boost your visibility and attract a large audience and, ultimately, prospective customer, you need to embrace these changes and use strategies that are working today (not the ones that were working yesterday because chances are that they don’t work anymore!).

Quote from the session: “The appropriate response to the overwhelming amount of content on the web is not to create great content. Great content is not enough anymore.”

Before we look at what the future may look like, let’s have a look at where we’ve been.

The second era (2002 to 2008) was about search. There were a bunch of websites by that time, so we needed a search engine to find them. A directory was not enough anymore.

The third era (2008 to today) is utility (or Youtility as Jay Baer would say) fueled by useful content and social.

All the websites created since the first era and all the content published under the third era create a big challenge: The amount of data available today is overwhelming and constantly growing.

According to research on big data, the data on the web will increase by 600% by 2020. It’s going to be more and more difficult to be found in the middle of all that data.

The problem lies in our limited ability to consume more content

Today, on average, Americans consume about 10 hours of content a day. How much more can we consume? Probably not much more… 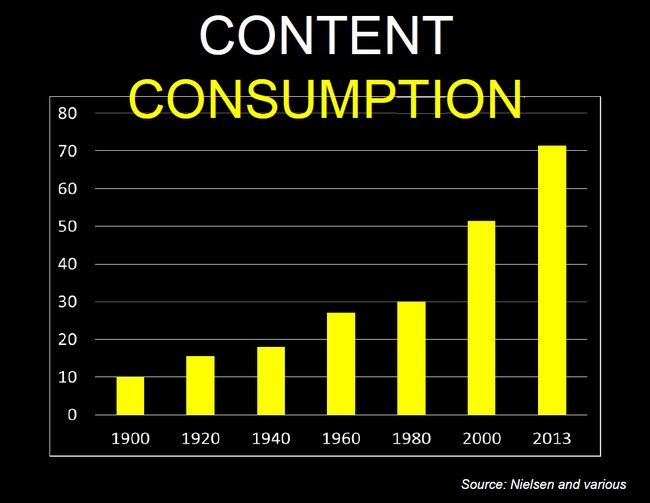 Every time there is a technology enabler, it increases the amount of content we consume:

What’s gonna be the next enabler? 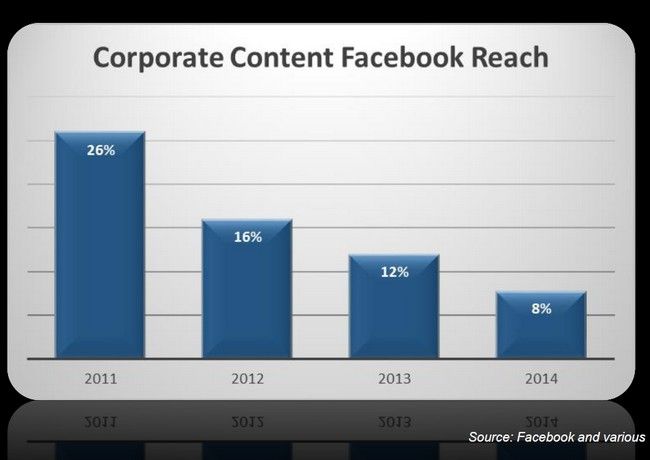 Personal note: I tend to disagree with the statement that Facebook is not letting brands reach their customers organically (read my post on the subject). Also, if you look at our Facebook Page Barometer, Facebook pages still reach, on average, 15% of their fans in 2014. See for yourself: https://barometer.agorapulse.com

Some people think that the answer to this is to publish epic stuff more often. In theory that’s OK, but what if all your competitors start creating epic content as well? Can that kind of strategy scale? Probably not.

4 ideas to cut through information density

To succeed in the content visibility war, you don’t have to be best, you just have to be first and overwhelming!

Let’s look at an example from a medical clinic that does cosmetic surgery in Knoxville, Tennessee. Not the easiest industry to come up with a straightforward content / social strategy, that’s for sure.

In 2009, in the middle of the recession, their business was taking a serious hit. They used ads, but with the recession, people were cutting their budgets on things that were not really necessary. Cosmetic surgery was definitely one of the items that could wait, so people delayed their decision.

The first thing they did was to start to educate.

Note the 96 comments they got on this question!

Then, on the following Friday, they do a video on Youtube with the answer, like this one:

Their Youtube channel now has hundreds of videos, some of them having more than 1,500 views alone.

They would then draw a random winner from the right answers on the FB poll. As you can see from the poll above, it got more than 90 comments. Pretty good engagement.

They also started a blog.

They also created ebooks that were so popular that their competitors wanted to buy them. Then they created a cook book!

Very quickly, they were owning the conversation in their markets.

Their revenue was growing 19% a year in the middle of the recession.

Conversion rate moved from 50% to 70% for purchase after the first consultation.

Why? People visiting them were feeling that they already knew them from all that content.

The takeaway from that business case:#1: find an unsaturated niche (here: plastic surgery in Knoxville)

#2: put together an aggressive strategy on the keywords that will be relevant to help your customers

Personal note: GREAT case study that will resonate with a lot of small businesses. Thanks for sharing Mark!

Mark told us the story of Robert Scoble.

He was a clerk at a camera shop and discovered blogging, so he started blogging about what was going on in Silicon Valley. After a while, 1000s of people started to read his blog. He quickly became an influencer.

The source of his power was not his wealth or his existing connections, he just created content that moved people.

Bottom line: Everyone who has a powerful voice can become an influencer.

You may think that it only works for “sexy” products.

Let’s talk about a product that’s very low on the ‘sexiness” scale: Listerine.

If there’s hope for Listerine, there’s probably hope for each of us!

According to appinions, Listerine is the influential voice of oral care.

This has not always been the case. Actually, when Listerine did an audit of conversations, they discovered that there were only a few conversations about Listerine, but a lot of them about oral care: 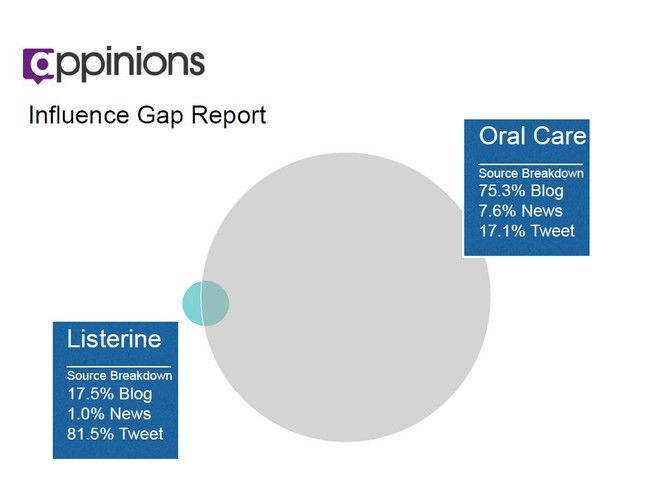 What Listerine did? As the level of conversations about their brand was not scalable enough, they decided to invest so they would become an influential voice about the closest connected conversation that had the biggest potential: oral care.

Takeaway: if your pipe is too small, what bigger pipes should you consider owning?

People lack the time to consume more content from us. Let’s make things easy to digest. We can create:

Being RITE means being:

Power doesn’t come from content, it comes from content that moves! The entertainment aspect is probably the most important.

Mark gave the example of the Chipotle video campaign to illustrate his point about the entertaining aspect of content. Here is the video he made reference to:

Another example he gave was how Slate seized the opportunity to create a fun app that allowed you to “Travoltify” your name.

It was a cheap and easy app to build, but because it was so much fun to use, it generated a lot of traffic with hundreds of thousands of shares on social media: 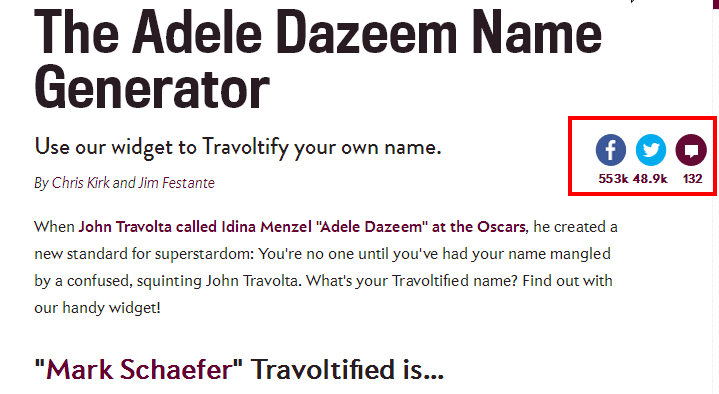 So by now you’re probably asking yourself, what’s the 4th digital revolution?

According to Mark, the next revolution in Digital will evolve around:

The focus will be on immersive experiences.

He mentioned cognitive computing with the Watson project from IBM.

He thinks that this technology will be embedded in our smart phones in the next 12 months.

He also believes that wearable technology, such as the Google glasses, will change the way technology helps us interact with our environment.

He is also a big believer in gaming. Gaming is a trend that will not go away. What if the next generation of technologies could make people play? Have more fun? What if we could make a game out of anything? The big gamification trend in the software industry is definitely a sign that Mark is looking in the right direction.

But at the end of the day, Mark thinks the killer app is to be more human!

He gave us a great quote for his conclusion: 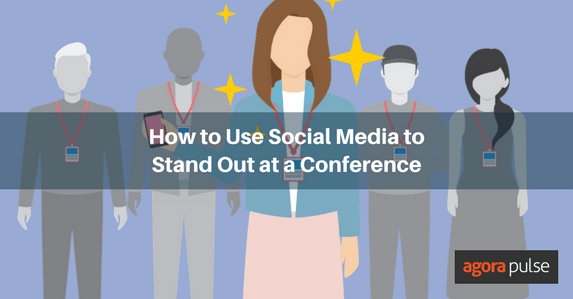 How to Use Social Media to Stand Out at a Conference 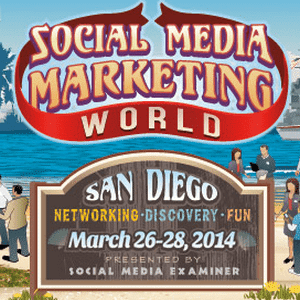