To invest in social audio or not to invest, that is the question.

Right now, I’m guessing your answer might be an easy no.

Not when we saw downloads of social audio app, Clubhouse, drop by 80% in a matter of three short months.

Though it might be curtains down for Clubhouse as a social audio platform, the show could still go on for social audio as a concept.

I mean, we all remember Friends Reunited, MySpace, and Vine, right?

Although all three social networking platforms are dead (or taking their last breath, at the very least), all three concepts continue to live on through bigger, better, more market-ready versions: Facebook is the new Friends Reunited. YouTube is the new MySpace, and TikTok is the new and improved Vine.

So, who’s to say the same won’t happen with social audio? Clubhouse might be sinking, but that doesn’t mean it’s taking social audio down with it.

Could Clubhouse be replaced by a bigger, better, more advanced version, just like Friends Reunited, MySpace, and Vine were? Or is social audio already dead in the water?

The Rise of Social Audio

The stories surrounding social audio seem to be heavily centered around Clubhouse, not social audio as a concept. Anyone else agree?

Every article is filled with:

The rise: “Clubhouse reached a peak of nearly 10 million monthly downloads in February 2021!”

But we need to get underneath the surface of Clubhouse to understand: Is social audio a marketing tactic that’s worth investment, or is it just another pandemic-driven phase like Zoom quiz nights and banana bread were?

First, let’s answer the question: What is social audio?

Social audio is real-time audio via a social platform. It’s less intimidating than video can be and yet more personal than straight-up texting can be.

All right … It’s impossible to talk about social audio without mentioning Clubhouse because it does play a pinnacle part in its rapid growth.

In 2021, Clubhouse generated over 19 million downloads in less than six months, with some invites to the app selling for $400 on eBay.

That rapid growth inspired the launch of more than 40 copy-cat social audio channels, platforms, and services, from some of the biggest players in tech.

That focus on social audio was all happening at the height of the pandemic when the “stay at home” messages were leaving people feeling isolated and lonely, suffering from Zoom fatigue, and desperately seeking personal connections with real people.

Social audio was a way for people to connect with others and join conversations without having to face the awkwardness of video calls, more screen time, or the dreaded coronavirus.

Also, social audio was a welcome relief from the onslaught of visual and video-based platforms, like Facebook, Instagram, and TikTok. Social audio didn’t have filters or photoshopped images portraying unattainable fake-perfect worlds. It gave people access to real, authentic content that they could interact with. And because it was a new channel, it wasn’t saturated with ads either. Always a bonus!

Social audio was providing brands with an alternative channel to post real-time, authentic content. They could discuss timely topics, strike up two-way live chats with their audience, and engage them in real conversations at a time when people were craving open dialogue.

It was a perfect way for companies to build genuine, personal relationships because these live conversations and interactions made them vulnerable. This vulnerability humanized brands and made them more approachable and accessible to their audiences.

Social audio was a chat room, a podcast, and social media all rolled into one. It was a marketer’s dream …

But then, almost overnight, Clubhouse downloads fell by 80% to just 3.8M, Facebook decided to integrate its Live Audio Rooms into its live video offering, and Twitter started scaling back resources for Twitter Spaces.

Why didn’t these platforms continue with their social audio growth?

The Fall of Social Audio

There was a combination of factors that caused Clubhouse and social audio in general to fall so dramatically from grace.

As a new app on the block, data protection and privacy issues were worrying social audio users:

Plus, there were real concerns over how these real-time social audio apps could monitor and moderate hate speech, harassment, misinformation, and trolling.

But the biggest reason for the dramatic downfall of social audio was the end of the pandemic.

When the world started to open back up, it became easier for brands to revert to using familiar platforms like Instagram or YouTube to market their products and services. They could still produce authentic, vulnerable content, in real time, but the audiences on these established platforms were much bigger and easier to reach.

Brands no longer needed the fresh, new social audio apps to try to attract and engage their audiences because they weren’t living within the tight constraints of lockdown: They were free to go back to their tried and tested marketing methods.

Social audio got left behind.

Can there be a glimmer of hope on the horizon for social audio?

Where Are We Now with Social Audio? Should You Invest in It?

“While the popularity of Clubhouse and other social audio apps may be diminishing, we won’t write the medium’s obituary just yet. Some experts say it could boost engagement by targeting smaller, more niche audiences.” – What Happened to Social Audio, Sound That Brands

Despite social audio’s dramatic fall in popularity, many companies are continuing to back social audio.

Take this as proof that the concept is still very much alive and kicking:

Sometimes, new technology and ideas just take a while to find their place.

“There is compelling evidence to suggest that the popularity of social audio will endure for years to come.” – The Rise and Fall of Social Audio, Forbes

74 million people listen to an average of eight podcasts a week. So, we can’t ignore the power of audio. And the most natural progression from regular podcasting would be to allow a dialogue between the podcast host (the brand) and the listener (their captive audience).

Social audio has such a low barrier to entry because people love engaging in natural conversations. Social audio is, therefore, a no-brainer for establishing a strong identity, building personal relationships with customers, and proving that you’re authentic and credible as a brand.

But the biggest issue that could derail social audio for good is data protection and user privacy.

For example, how can social audio apps get consent from users during live discussions or recordings?

With 74% of internet users concerned about their data and online privacy, social media platforms and e-commerce entities are under immense pressure to make sure that their user’s data is safe and secure. (Agorapulse tackles this in its Trust Center.) Social audio apps are no different. If anything, they’re under more scrutiny: If they put just one foot wrong, they’re gone.

There’s still work to be done to introduce stricter rules and regulations for keeping user data private and secure on social audio apps, and this should be your number-one priority if you’re planning to include social audio as part of your marketing strategy. 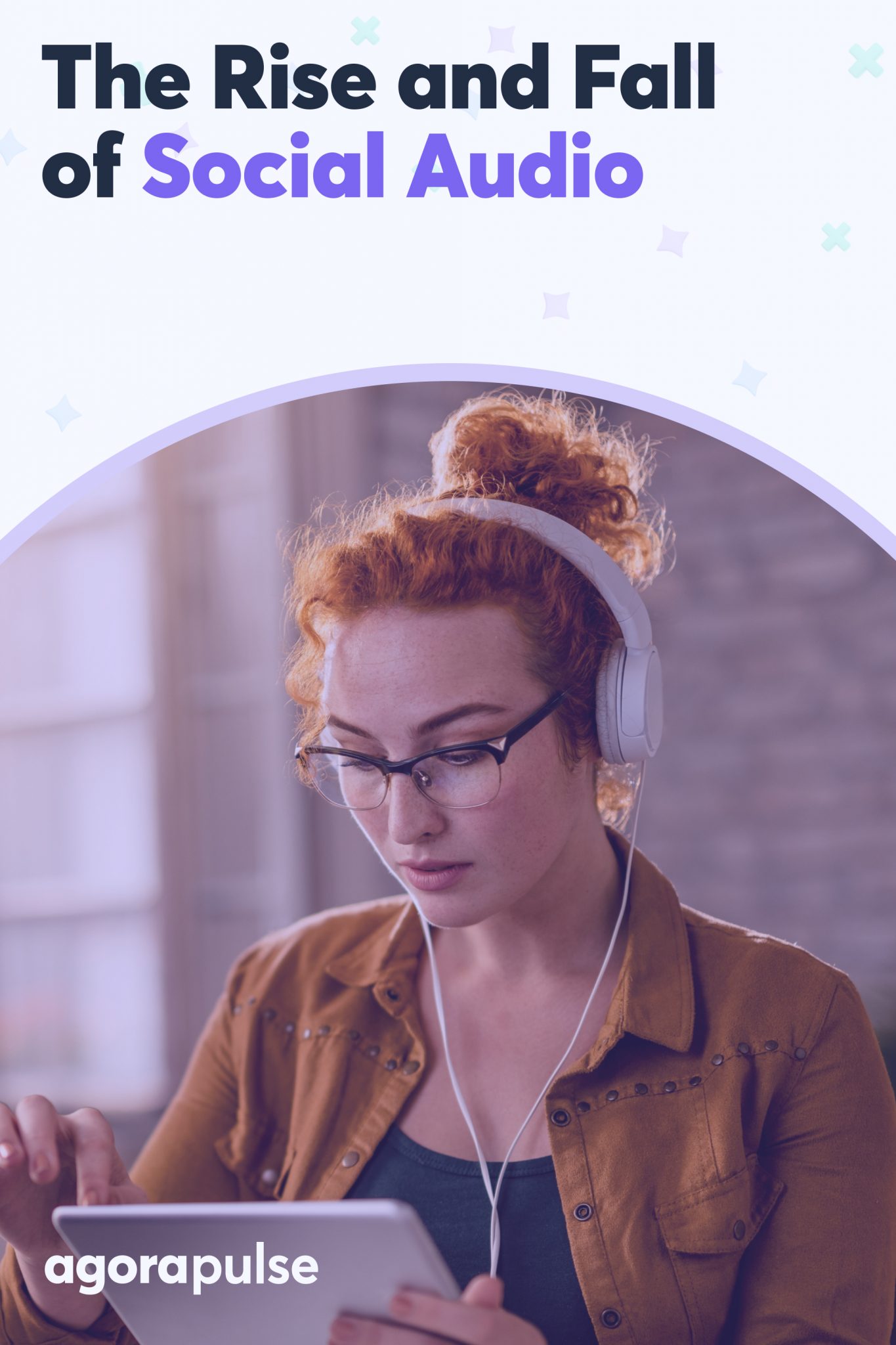 The Future of Social Media Outside of Marketing

The Modern-Day CMO’s Role in Innovation and Agility

The Art of Brand Storytelling for Modern-Day Marketers [Free Ebook]