Trashposting. Do you know the term?

No, I’m not talking about posting your trash to all your Instagram followers.

That is trashposting. Or sh*tposting, as it’s also called. We’ll keep it clean and stick to “trash” in this article.

Trashposting is a trend that more brands are starting to follow in a bid to reach the masses on social media and stay relevant with their audience, especially their Gen Zers.

“VCs and other people with serious professional reputations proudly align themselves with a form of content that is decidedly un-serious.” (Why is This Interesting?, The Sh*tposting Edition)

But trashposting can be a risky road to take.

Done right, it’s a genius social media marketing tactic. Done wrong, it can be irritating, offensive, or, even worse, cringe-worthy. Done REALLY wrong, trashposting can bring an entire brand down.

Where Did Trashposting Come From?

As a concept, trashposting first appeared back in 2008 when the definition was: “to make utterly worthless and inane posts on an internet message board.”

Back then, members of forums like 4chan and Something Awful would contribute nonsensical posts to provoke harmless reactions for their own amusement.

But now, Urban Dictionary describes trashposting as “ironically posting something which, to the average person, looks just like a cringy or weird or stereotypical post conforming to a norm, but is intended to mock, insult, or amuse.”

It’s the rise of social media marketing that has driven this upgrade in the definition and intention of trashposting.

Social media is the perfect platform for trashposting. Especially for Twitter, TikTok, and Snapchat. Those channels usually attract a younger, more progressive, and adventurous audience. One that craves controversy. One that doesn’t balk at bad language, terrible punctuation, and spelling mistakes.

And one that likes their brands to talk authentically, with a sort of self-deprecating sense of humor.

“Social media and the conformity of portraying a ‘good,’ ‘happy,’ or ‘basic’ social media presence has made sh*tposting very much digestible.” (Independent, Sh*tposting: What is the bizarre online behavior)

With the growing need to stand out from the competition, and deliver real, authentic content to their audiences, brands have been drawn to trashposting like moths to a flame.

Trashposting is still all about posting intentionally pointless content. But rather than using inane posts to stop conversations and make people cross or confused, it’s now a marketing tactic that brands use to make themselves relatable and make their followers laugh.

Although, paradoxically, trashposts can cause confusion or irritation and still be successful.

Consumers would love brands to take themselves less seriously, but some brands are starting to experiment with shock value over authenticity.

Trashposting isn’t just about posting funny thoughts or memes on social media to make people laugh and like you as a brand.

Unfortunately, it’s not as simple, or as easy, as that.

It’s about posting completely meaningless content that has the potential to go viral because it’s humorous, but also leans towards the dark side, is a bit borderline offensive, or slightly off from the mainstream.

Sunny D was never going to stop doing anything. But this post got 319.8K likes and 4.1K replies, even though it was a meaningless tweet. It invoked curiosity. And it made people laugh because it was unexpectedly dark. You wouldn’t expect a cheerful, happy-go-lucky brand like Sunny D to post something like that.

However, trashposting is a tricky concept to wrap your head around. Posting controversial, meaningless content kind of goes against every social media marketing instinct in a marketer’s body, doesn’t it?

So, is trashposting for you? Should you add it to your social media marketing skillset?

The Risks and Rewards of Trashposting

Rewards: Why you should trashpost

“[Using viral humor to expand your brand visibility across social media–is a game of high risk and high reward],” according to Wordstream, 5 of the Funniest, Millennial-Approved Brand Accounts on Twitter). “The reward: appealing to a lot of young people who appreciate personable brands that don’t take things too seriously. Plus, a viral tweet is free advertising for your company.”

Scientists claim that seeing a randomly funny/weird post pop up as you mindlessly scroll through your feed releases the “feel-good” hormone, dopamine.

So, we can safely say trashposting gives your audience pleasure, satisfaction, and motivation. If that’s not a great reason to start trashposting, I don’t know what is.

But trashposting can also help to differentiate you from your competition. If all your competitor’s post is predictable, stale, and boring sales/ad-based content, and you come in with a sharp, snappy but utterly meaningless one-liner or a disturbingly dark (but weirdly funny) meme that pokes fun at yourself, who’s going to stand out more: You or them?

Trashposts can break down barriers and make you relatable in a relevant way. If you get it right, a good trashpost can speak to your audience on a really personal level. They’ll be the ones to “get it” when others perhaps wouldn’t. That creates a sort of exclusivity that builds closeness and loyalty. Especially with your biggest market on social media: the Gen Zers and Millennials.

“Capturing the millennial sense of humor will differentiate you from your boring competitors and show prospects that you’re a brand they can trust.” (Wordstream, 5 of the Funniest, Millennial-Approved Brand Accounts on Twitter)

Plus, you’re more likely to go viral with a brilliantly thought-through trashpost. Simply due to the sheer absurdity of it.

And you know what “going viral” means: FREE ADVERTISING.

Risks: Why you shouldn’t trashpost

“Using viral humor to expand your brand visibility across social media is a game of high risk and high reward,” according to Wordstream. “The risk: falling flat on your face in cringe-worthy fashion.”

There is absolutely no humor in child bondage, but the brand definitely nailed the shock and controversy angle with their campaign. They most definitely took their post to the dark side.

If we can define the Balenciaga holiday campaign as trashposting, then it’s a classic example of how trashposting can severely backfire.

I’d class Kanye West as a serial trashposter, and so would many others. But while some of his tweets create an uproar, go viral, and make people laugh (usually in disbelief), a lot of his posts recently landed really, really badly due to the anti-Semitic content. One such post got him banned on Twitter.

Whatever Kanye’s potential mental health issues, this type of behavior is disgusting and completely unacceptable. And, as a result, he’s in serious danger of permanently damaging his brand and his business. For instance, Adidas has terminated its partnership with him because they “do not tolerate anti-Semitism and any other sort of hate speech.”

People are cringing at him, not laughing, these days.

No one is invincible in the world of social media, even if you’re worth over a billion dollars.

So, it can be difficult for brands to see where the line between trashposting and posting trash is. After all, a trashpost is meant to be nonsensical and controversial.

How do you make sure you don’t trash your brand with trashposts that are too trashy?

How to Trashpost Without Trashing Your Reputation

While no one reading this would go to the extremes that Balenciaga or Kanye West did, it’s still easy to miss the mark with a trashpost.

Take these four tips into consideration before you start trashposting.

If you only take one thing away, make it this:

Before you attempt to create a trashpost, know exactly who you’re talking to.

This is one of the first rules of marketing, but it applies to trashposting more than any other type of content because trashposts are incredibly niche. You’re trying to hit a specific type of humor, and the only way to do that is to live and breathe your social media audience.

Trashposting is all about staying on top of cutting-edge humor.

Instead of trawling through social networks, forums, message boards, and current news sites to keep up with what the kids are saying online, invest in a social media management tool, like Agorapulse, that has Social Listening features.

Social Listening features will let you listen out for what’s hot and what’s not. It’ll help you establish what people are talking about, what they’re interested in, and which trends you should jump on and which you should leave well alone.

It’ll show you where the key trashposting opportunities are and inspire truly meaningless content!

Hot tip: Sign up for a two-week trial and try Agorapulse’s Social Listening features for free. Or contact Sales for a free demo.

Netflix does this well. 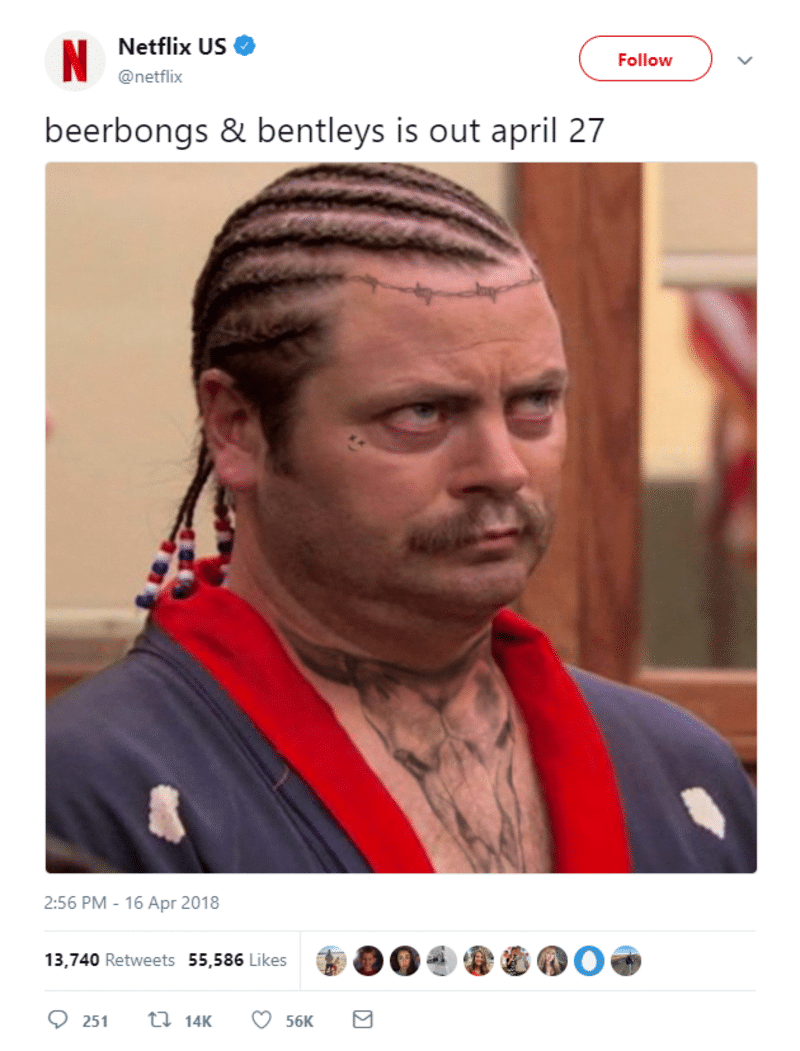 The above is an example from 2018 so it’s a little outdated, but still funny. For context, Post Malone released a new album called “Beerbongs & Bentleys” in April 2018. Now, if you didn’t know, Post Malone used to have dreadlocks and there was a stream of jokes on social about how much he looked like Ron Swanson from the hit TV show “Parks and Recreation.”

Netflix spotted this and, much to the delight of their followers, made a cheeky little trashposting meme about it, poking fun at the famous rapper while also promoting one of their own TV shows. Genius!

You need to find the balance between entertainment and absurdity to make you relatable, not repulsive.

Chipotle does this well.

Instead of clamping down hard on their biggest market, they’ve turned it into a joke. They’ve embraced the issue and used humor to turn the problem into a marketing opportunity.

Trashposting is the antithesis of corporate.  Start the whole thing over again if any of these buzzwords, for example, feature in your trashpost:

Unless you’re poking fun at yourself (or your competitors).

Stiff corporate speak and word-perfect posts are not relatable and are, therefore, not trashposts.

For example, a lack of punctuation can sometimes be a good thing. It can keep drawing the reader along to the next line, and it can make you stand out from other posts. 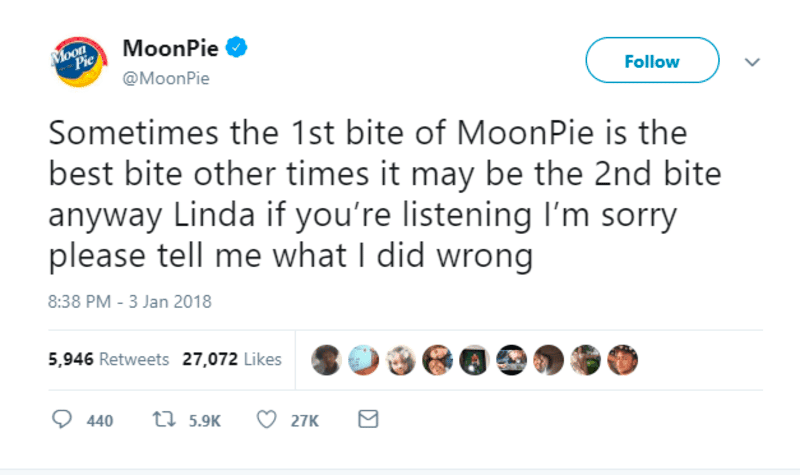 It’s not what you’d expect from a corporate brand that sells marshmallow confectionary, is it?

And that’s exactly why this trashpost worked so well.

A big factor when deciding whether to trashpost  needs to be your target market: Gen Zers and Millennials will get it. Baby Boomers and the Greatest Generation, not so much.

If you do choose to trashpost, minimize the risk of getting it wrong and damaging your brand by:

Trashposting can be tricky to get right. So, if in doubt, just remember this: Don’t take yourself too seriously. Sprinkle your Twitter feed with a few self-deprecating tweets and see how people respond.

Make sure to use Agorapulse to schedule all your posts and get the data on what works and what doesn’t (especially with your trashposts). Sign up for a free trial right now! 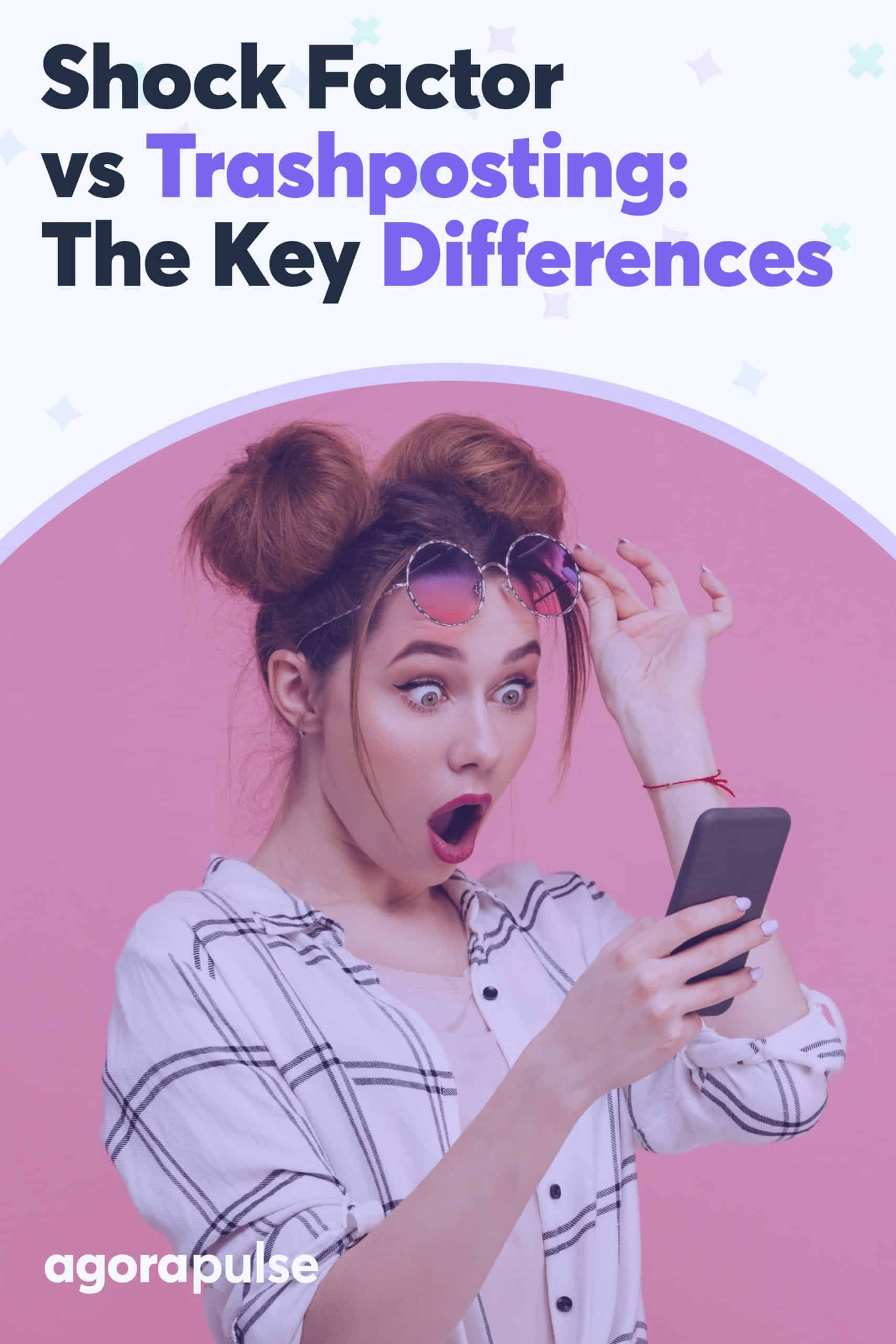 How to Be More Creative on Social Media

Why Storytelling Is Important for Social Media