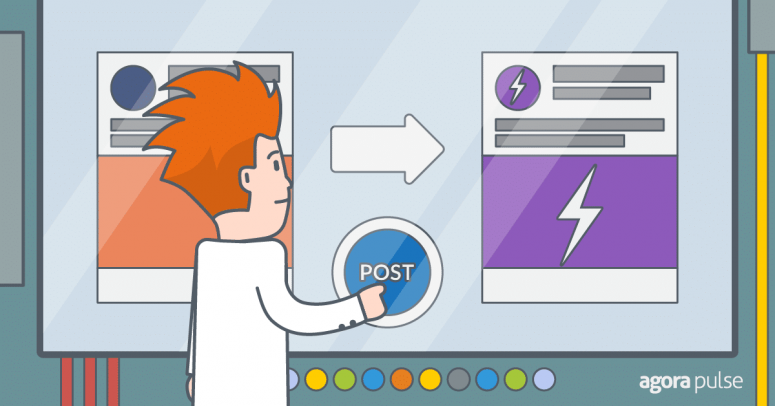 This question was asked on Quora and the only answers given were related to improperly targeted boosted posts, which may have resulted in lower organic reach.

When a Facebook ad is poorly targeted, or low quality, users may hide that ad or the page in general, resulting in what Facebook calls “Negative Feedback.”

Once this happens, posts from that page will be shown less to that user and possibly other followers of that page.

But what if you don’t have any negative feedback on an ad? Will organic reach on the following post be higher or lower?

In case you’ve never used the Boost button it’s the blue button below every post on your Facebook business page: 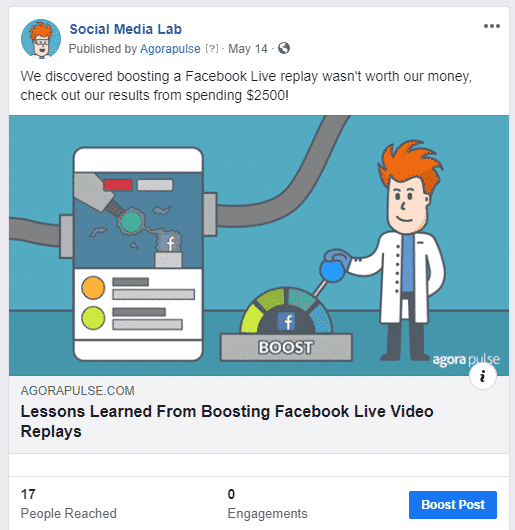 After you click it you get a ton of options — such as your objective, targeting, how much to spend, how long to run, etc. 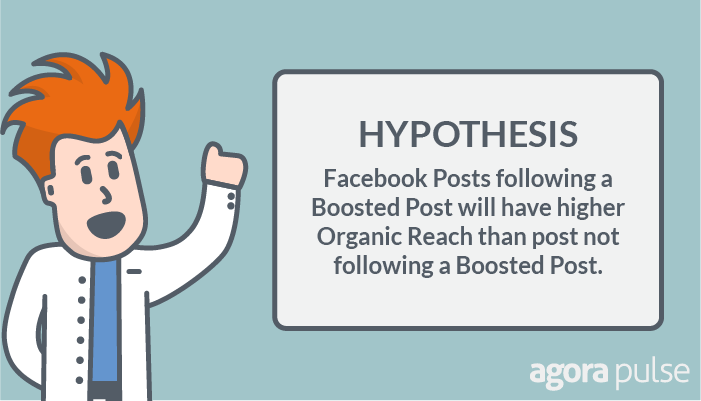 My thought process here is due to an increased level of engagement in the previous post more people will see the next post. They may not interact with it, but should at least see it.

I used a local bounce house business’ Facebook page for this test, it’s a local business, that I owned at the time of testing, renting out bounce houses, water slides, etc.

The page had around 5,500 Likes after four years:

Like many small business owners I wasn’t sending traffic to a lead magnet page or email opti-in form. I simply wanted more engagement and exposure of my product to get immediate rentals.

Facebook Ads Manager can be confusing for many and requires time to learn and implement.

Boosting a post on Facebook is simpler and you don’t have to get bogged down in Facebook’s ad system. Plus my ad spend was roughly $150-200 per month, so I didn’t need a lot of complicated tasks to set up.

For many small businesses selling a local product or service, this is all that is needed. Those of you into generating leads and gathering email addresses will need to read some of Jason’s posts!!

For me, the “Boost Post” button is all I needed!

The bounce house business is very seasonal, with the majority of the revenue happening between May through August. Water slides are the most expensive units to rent and the bulk of the business.

Starting in the Spring, I typically would boost 3-4 posts per week for $10-20 just to gain new Likes and show back up in the Newsfeed of my followers.

For this test, I decided I wanted to boost 10 posts for $10 each and then measure the organic reach of the post immediately after it. I intentionally made sure to boost a post then the next post wouldn’t be boosted.

I did this every other day, with each day only getting 1 post — either boosted or not boosted.

Before I could gather that data, I needed to establish a “baseline” of what organic reach was on the page.

To get this baseline, I posted 14 posts over 11 days without boosting at all.

The average organic reach of those 14 posts was 764.5 (that’s about a 14% organic reach, which is pretty fantastic considering many claim reach is only 1-2%)

When testing the baseline (and for the boosted/non-boosted test), I used photos similar to the ones below: 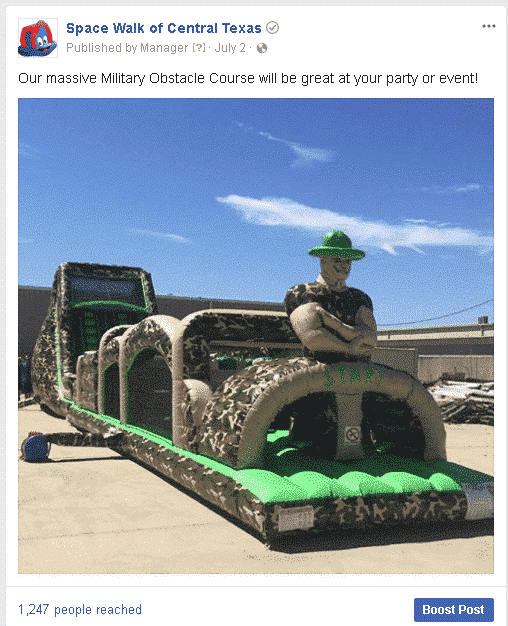 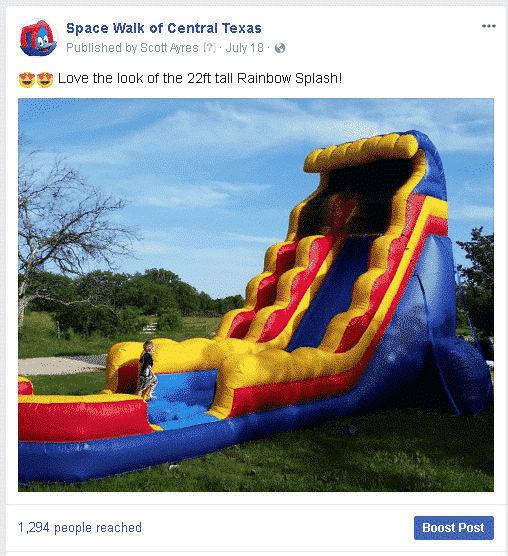 I won’t post all 34 examples from the test as that would be overkill! You get the gist.

Another caveat to add here is I waited about 6 weeks before gathering any of this data (baseline/boosted/non-boosted).

I wanted to ensure that every drop of Reach I could get had happened on these posts and the numbers were not skewed one bit.

The average reach of the 10 boosted posts was 1517, about 98% higher than the baseline non-boosted posts. Not bad for just $10 bucks per boost!

After each of these boosted posts, I posted a picture without boosting, waiting 24 hours after the boosted post.

Those 10 non-boosted posts had an average organic reach of 924. This equates to a 20.86% increase in organic reach over the baseline after the previous post was Boosted! 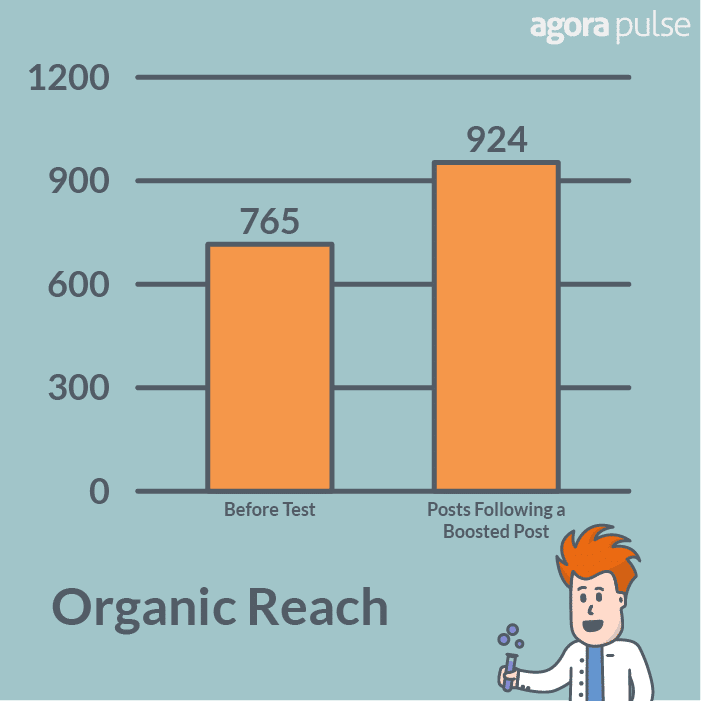 Was I Correct about Organic Reach After a Boosted Post?

This was 100% true based on the data from this test: Posts after a boosted post had a 20.86% higher organic reach than the average organic reach of the page. 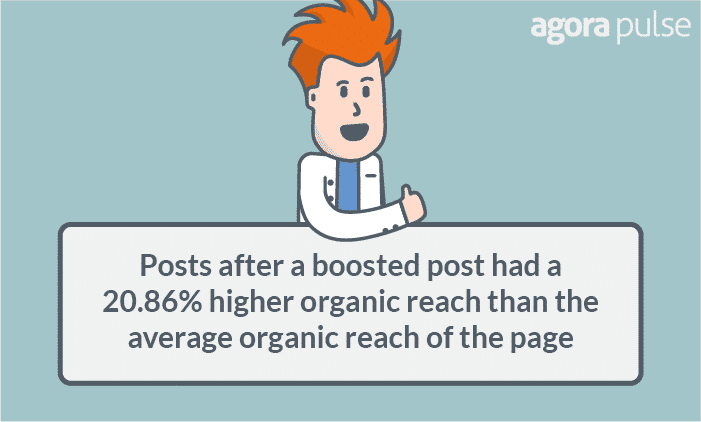 Results like this are why I’ve always tried to alternate my boosted posts instead of boosting back-to-back. If the next post after a boost is going to have greater reach than normal don’t spend the money on the boost for that post.

It won’t be as high as the boosted post, but any chance I can get to get FREE Reach I’m going after it!

If you were to test by posting links or videos, or a mixture of, your results may vary.

*One question that often comes up when I conduct these tests is “What if a post had more engagement than others, thus throwing off the Reach?”

For the 10 posts that were not boosted after the Boosted Posts there was one that got 10 Likes, while the average was 2.8. Reach on it was also about 400 higher than the average.

If we remove that post the average Reach is 876 for the remaining 9 posts, with Likes averaging 2.8. The baseline posts you recall had an average Reach of 764 and averaged 1.79 Likes.

So even by removing that highest performing posts, the posts after the Boost still were quite higher on average than the baseline. Thus also proving my hypothesis.