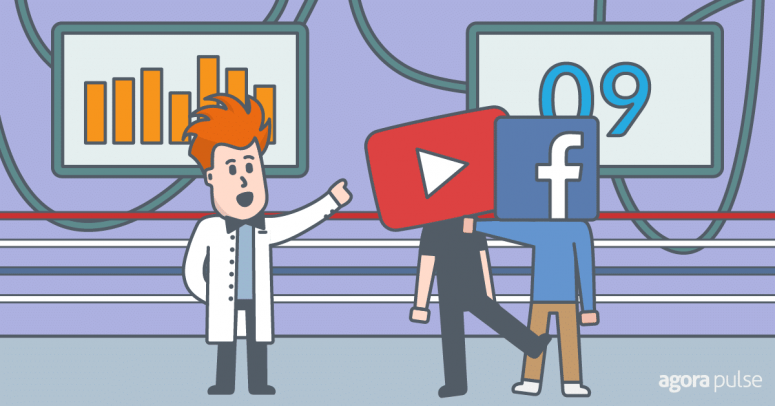 Study Proves: Facebook Native Videos Have up to 86% Higher Reach!

Facebook has changed alot over the years — and keeps changing daily — as marketers we are constantly trying to figure out what’s working and not working on the social giant.

Perhaps the most talked about post type the past 2 years has been video.

Facebook has launched a full on assault at YouTube and seems to be trying to take down the online video giant.

If you recall in the “old days” if you posted a link to a YouTube video it would play on Facebook. After all, that kept you on Facebook — which seemed like a good thing.

With Facebook handling YouTube videos the same as links to websites/blogs, they are punishing the Reach of them — if that’s the case then it would likely cause businesses to post them less due to lower Reach.

So we get it, YouTube videos get less reach. Do they also get less engagement?

That’s what a recent Quintly study sought to find out.

Quintly examined 187,000 pages and over 7.5 million posts to try to answer this question.

Here is what they found: 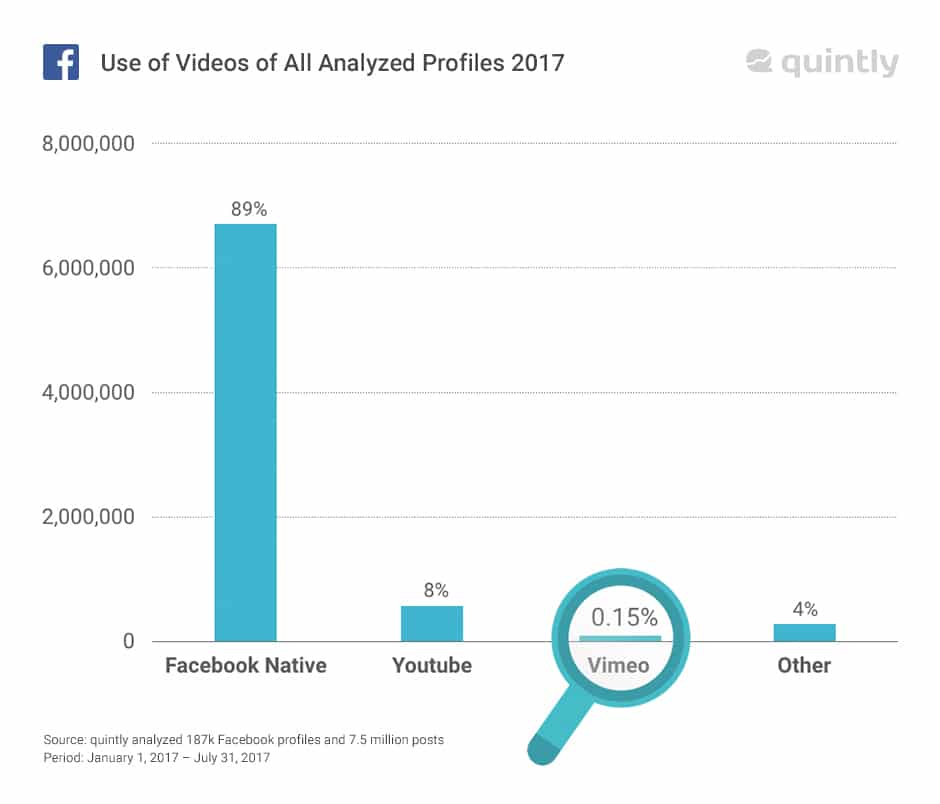 89% of all videos on Facebook are uploaded to the platform, while only 8% are YouTube video links! Wowzza! (and look at poor Vimeo!!) 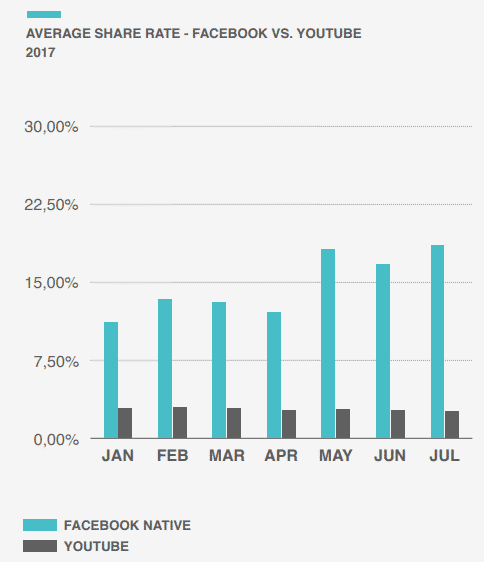 Another great finding in their data was the disparity in comments. Facebook videos received 530% more comments than YouTube videos. 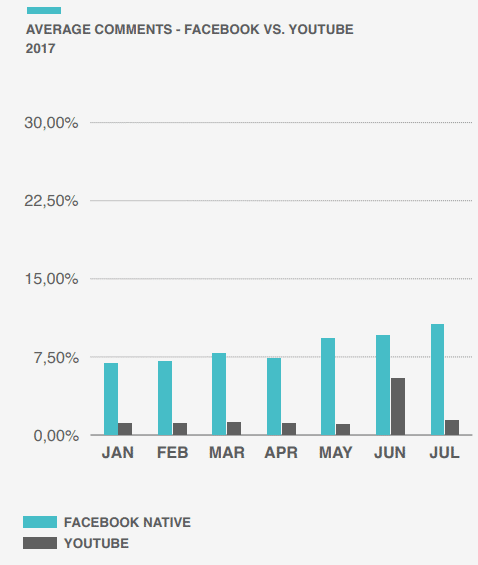 Lastly, let’s take a look at the Interaction Rate of both video formats — that’s the stat that really matters when it comes to engagement on posts. 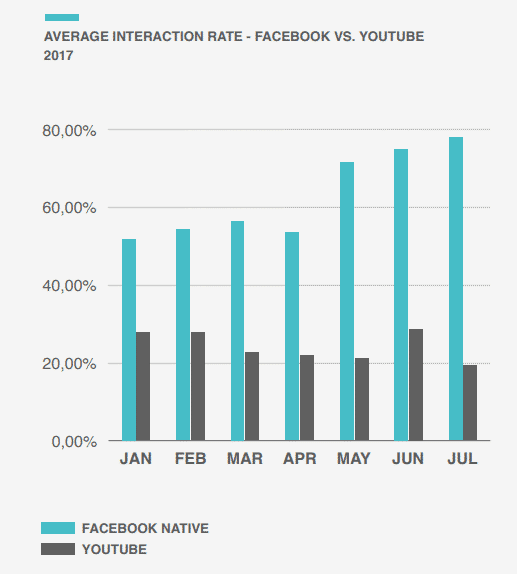 We reached out to Quintly and wanted to test their findings on a smaller scale (we also did this on a post about emojis on Instagram you should check out).

And the reason for testing on a smaller scale is we don’t know a few things about the pages Quintly studied:

They were totally up for the challenge!

Honestly this might be the easiest experiment for me to make a prediction on so far in the Lab.

I’m pretty confident Facebook videos will crush YouTube videos, but as mentioned we wanted to test this to be certain using our own data. 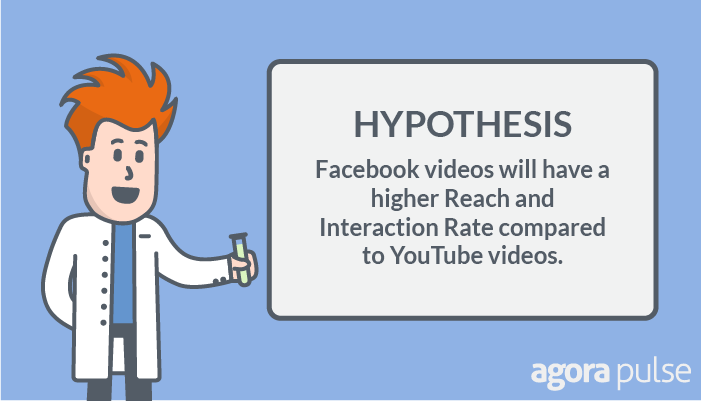 Setting Up the Test

To get real, valid, usable data we ran a test throughout January on the following Facebook pages:

For the 2 pages I had control of (Agorapulse and Space Walk), I created videos using the Wave.Video app.

I ended up creating 13 videos for Agorapulse and 12 for Space Walk — the number was fairly random, but would help me post throughout the month.

We also had one video already created by an advertising agency that I uploaded to Facebook for Agorapulse during this study. (I didn’t however post the YouTube link by accident. I’ll detail the results later.)

The Wavesnbackpack page uploaded 6 videos and posted 4 YouTube links to their page during the study. 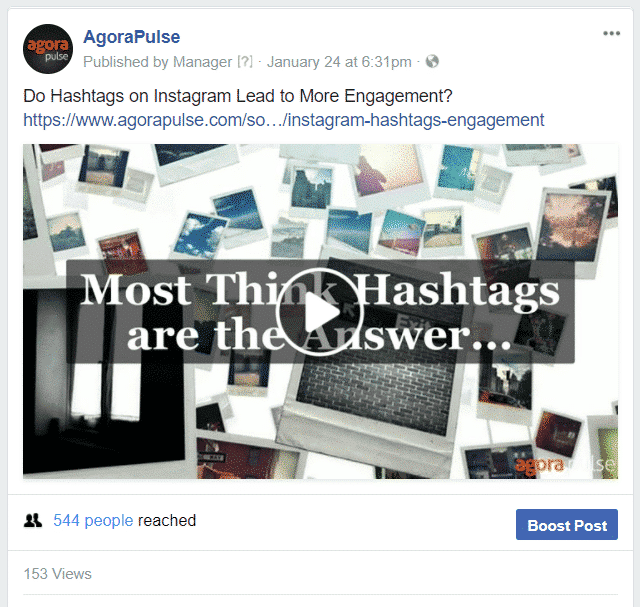 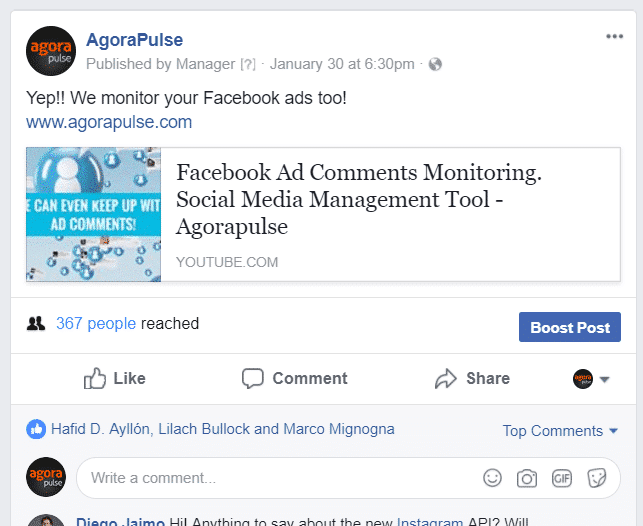 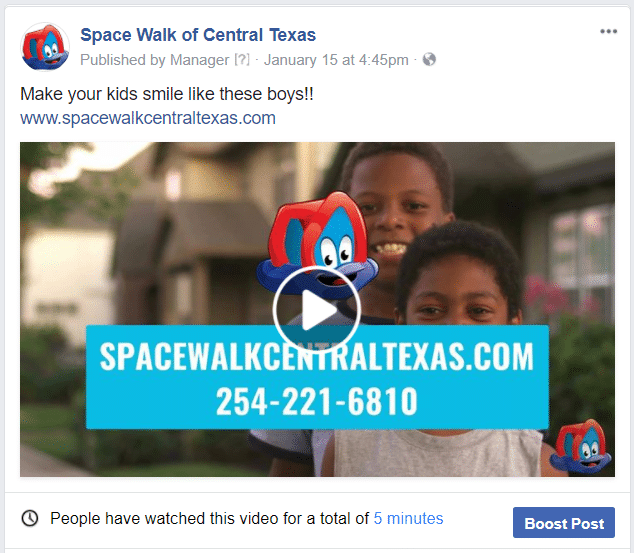 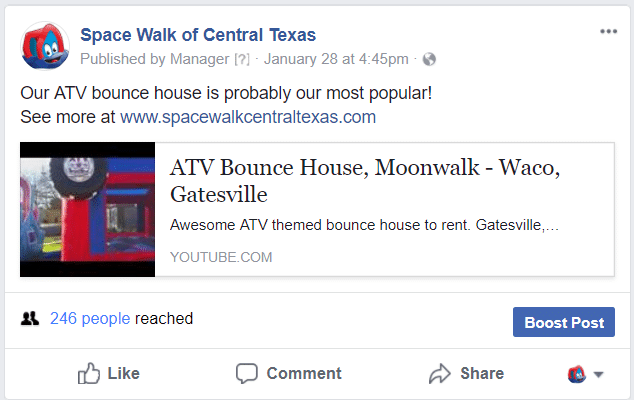 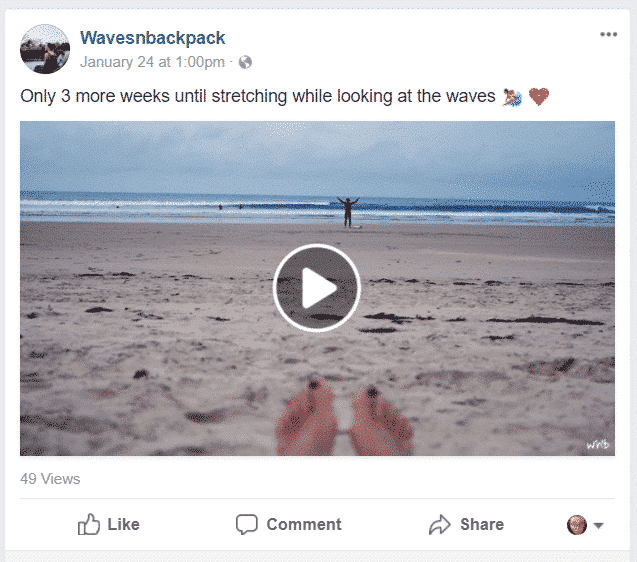 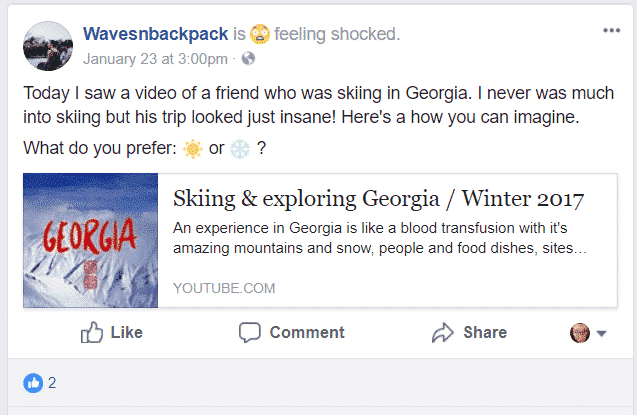 On the Agorapulse and Space Walk pages, I scheduled out posts using the Agorapulse app and ensured that the identical video post from either YouTube or Facebook was 2 weeks apart.

My thought with posting identical videos in this manner was to compare the results for the exact same videos. It could be possible the results could be skewed if one particular video was super popular compared to another that wasn’t. I hope this eliminates that anomaly.

Here’s how the distribution ended up for each page. 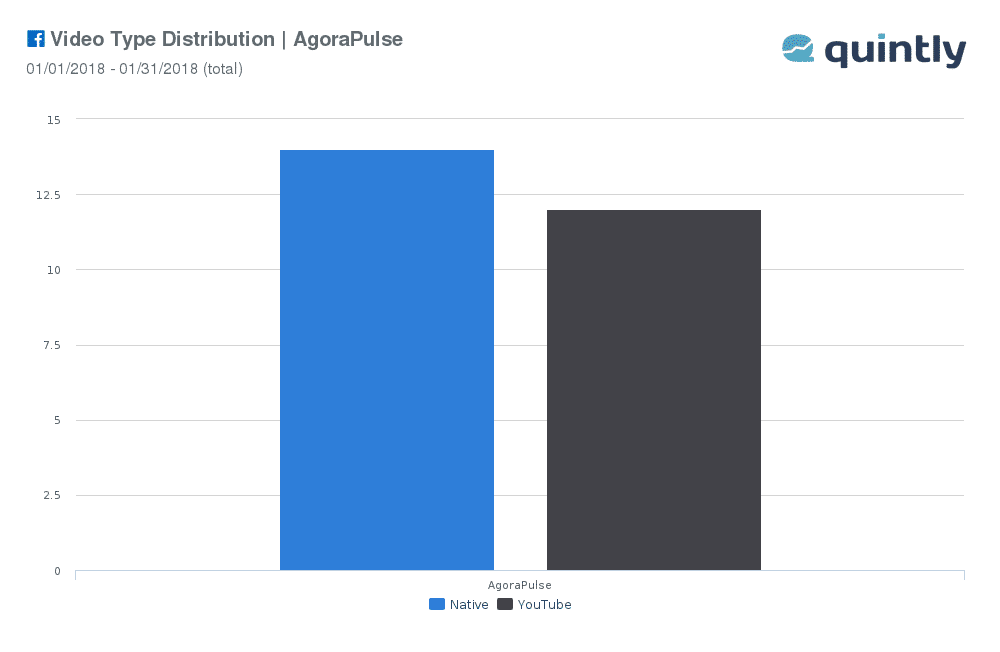 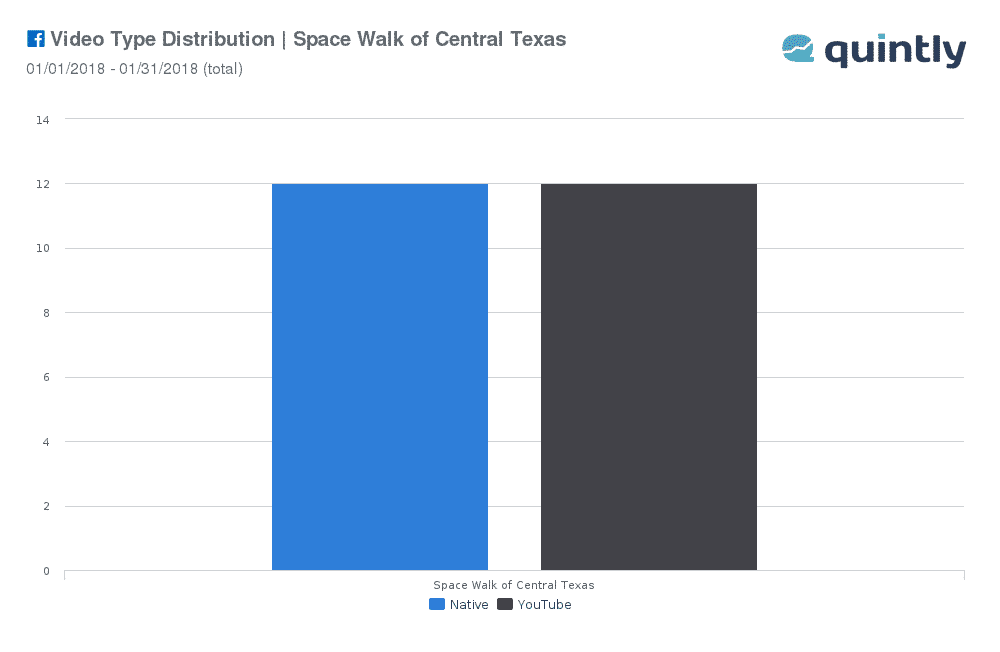 The Wavesnbackpack page did not follow this same strategy, they posted different videos from YouTube than those uploaded to their page.

Let’s Get to the Data!

First let’s take a look at Reach by post type for each page. 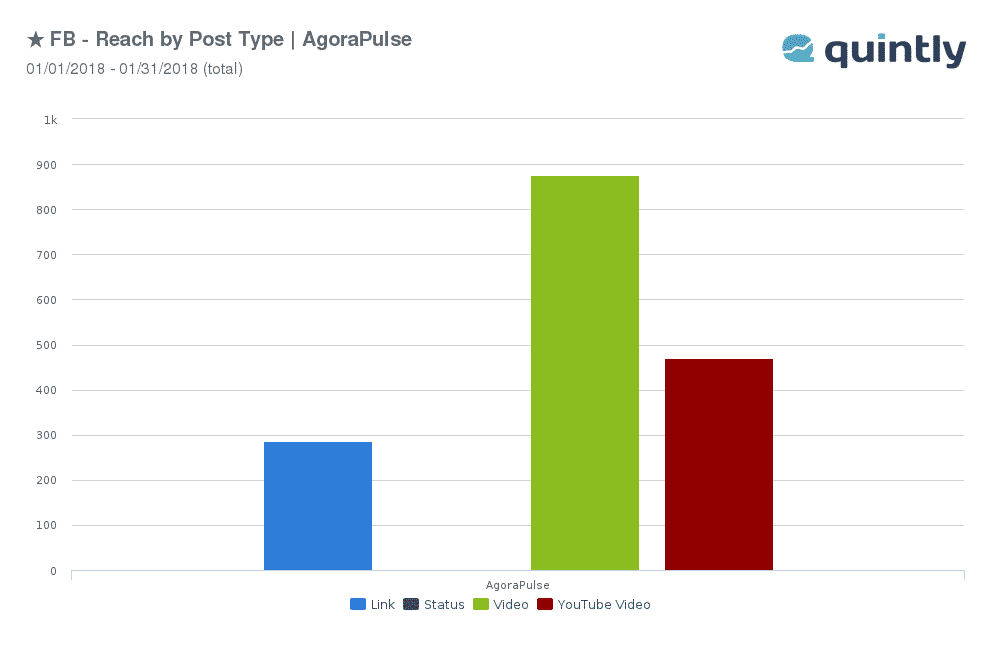 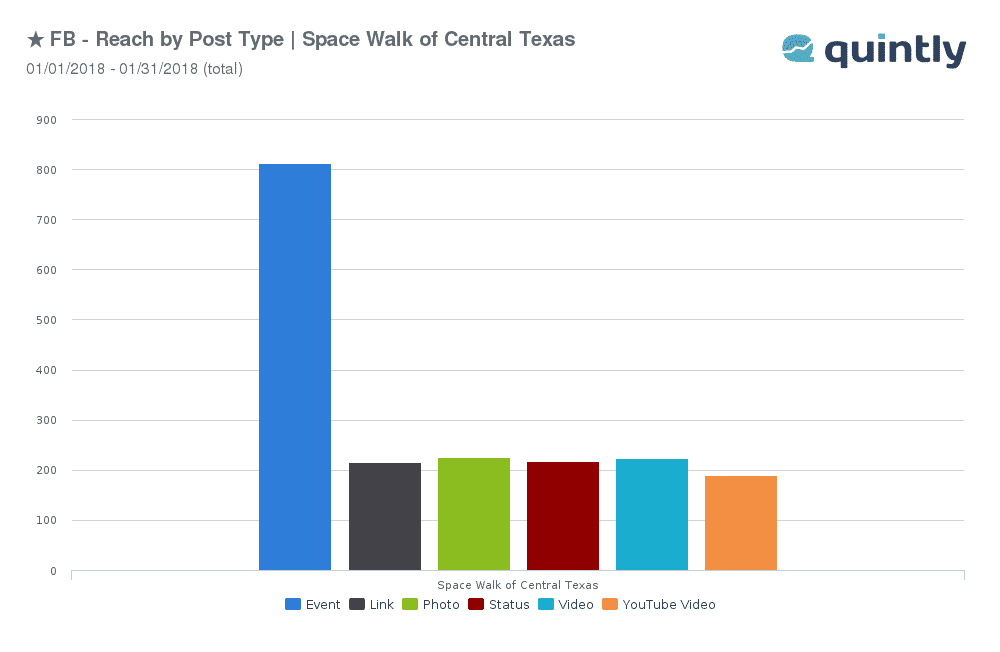 (The Event Reach is a bit crazy on this page. It was a shared post from another page about an event, so I think we’re seeing the Reach for the original post, not just the Reach of the post on my page.) 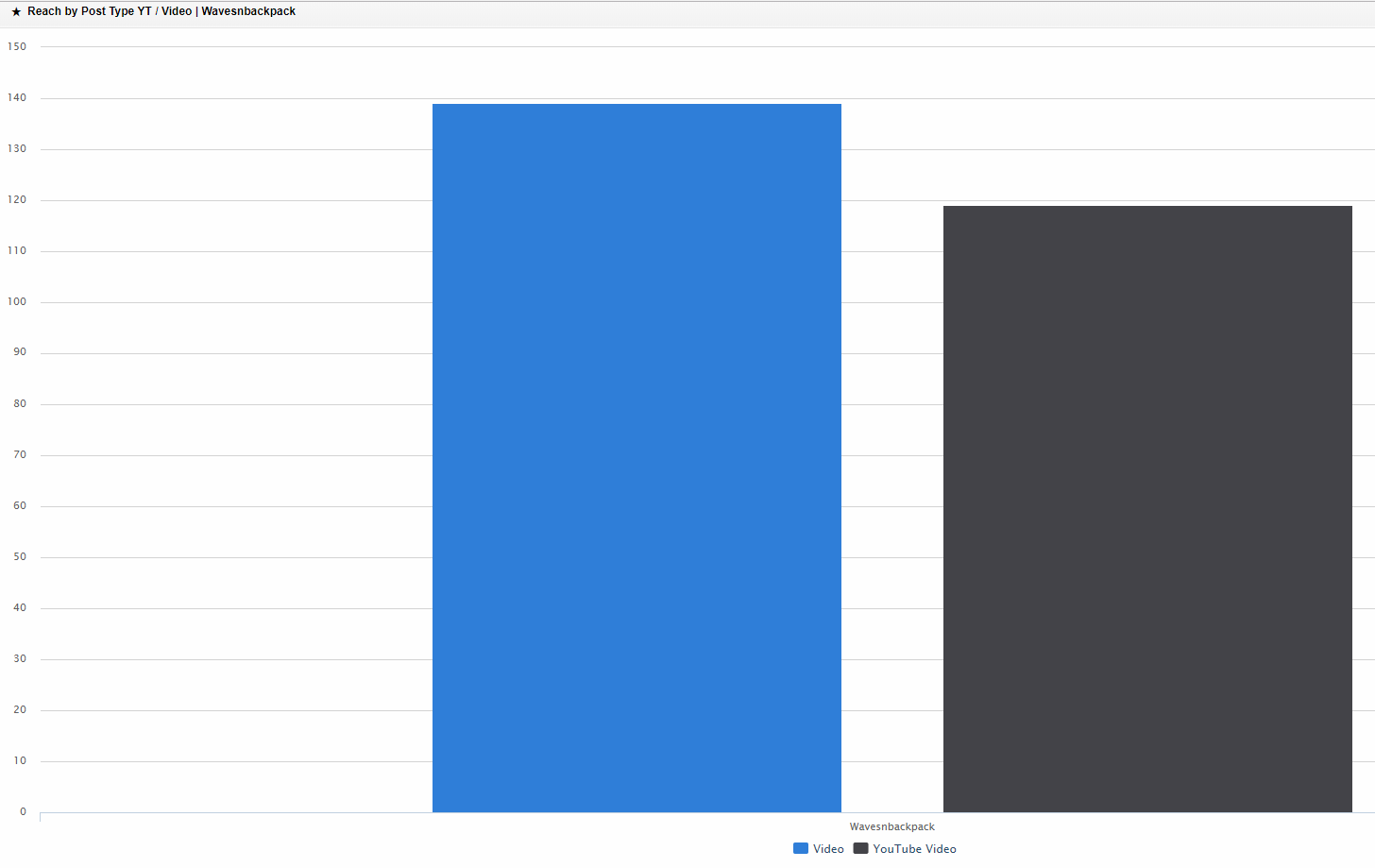 It’s easy to see that Facebook native videos had higher Reach — not too shocking here.

Putting this into a percentage perspective shows us just how much better Facebook videos performed when it comes to Reach: 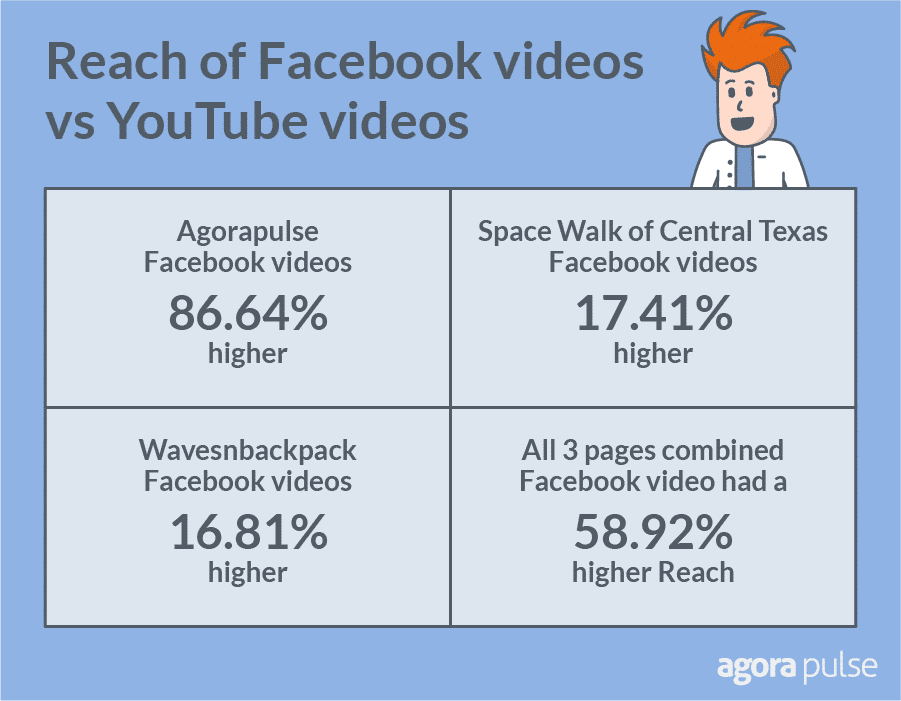 However I mentioned earlier 1 video that I didn’t post the YouTube link to the Agorapulse page — purely by accident.

It turns out this video also had an incredibly high Reach (and engagement).

The video is a new marketing video we created that has caught a lot of attention!

During this test it was by far the most viewed and engaging video. I’ll remove it from the Reach results and future data in this post.

The other state we’re gonna evaluate here is the Interaction Rate, a formula created by Quintly.

Interaction Rate: The sum of Reactions, Comments and Shares per post, standardized by the total amount of Fans.

Basically this is the percentage of followers that interacted with the posts. It’s a great way to compare numbers regardless of page size.

After all, bragging about 100 Likes on a post when you have 1 million followers is difficult to compare to a page that gets 10 Likes but only has 100 followers.

The average Interaction Rate of all 3 pages ended up like so: 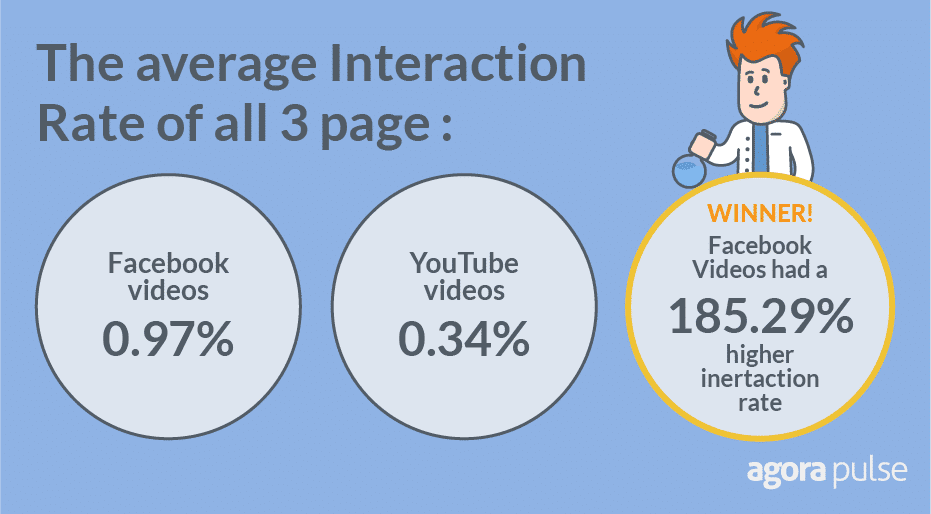 With Reach being 25.28% higher for Facebook videos on our 3 pages and the Interaction Rate being 185.29%, this might be the easiest conclusion I’ve ever had to make on the Lab! 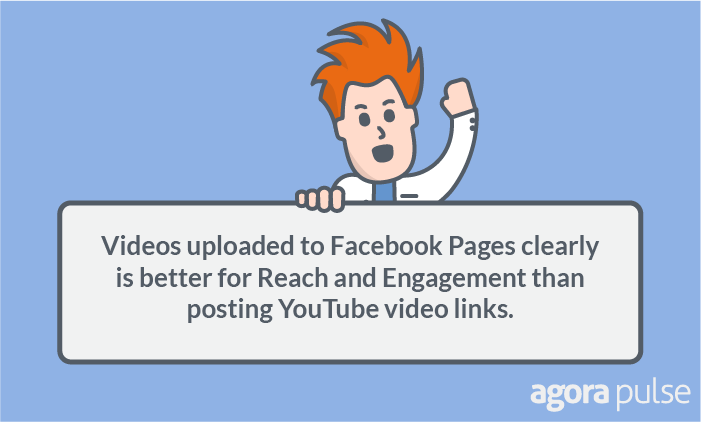 It’s easy to see that Facebook is favoring their own video platform, and that makes absolute sense.

Big thanks to Quintly for letting us dig into their data and letting us use their tool to do further analysis. Be sure to check them out.