What a year it’s been for social media managers and we’re only in May! 2018 has seen a barrage of social media updates brought about by new data rules, scandals, and network updates.

At Contentworks Agency, my team knows that keeping pace with social media updates is essential because it ensures our social media strategy remains agile, relevant, and compliant. If you’re working for a big brand, then it’s especially important that you take note of the new rules.

With so many updates, I’ve picked out the key points that you need to act on right now to remain up to date.

The social media giant has around 200 million fake or duplicated accounts right now. That’s huge.  “In the fourth quarter of 2017, we estimate that duplicate accounts may have represented approximately 10 percent of our worldwide MAUs (Monthly Active Users),” Facebook said in its latest annual report.

This poses a ton of problems for the network, some of which include fake news and stolen identities, and others which are related to skewed ad data.

Facebook has announced that it will require admins who manage pages with large follower counts to get verified by Facebook. Large page managers who don’t clear the verification process won’t be able to post.

If you’re managing large political pages you may face even stricter verification rules. You’ll need to submit government-issued IDs and provide a mailing address for verification. You will then be sent a unique code (Google style) which you’ll need to enter into your Facebook page.

What Should I Do?

As yet, Facebook has not been clear about what constitutes a page with “a large number of followers”. In my mind, it will be 10,000+ but that’s just a guess.

If you’re working for a big corporation, the chances are someone in your company has set up a “fake” profile at some point to manage your page and ad account. It could be under your company name, CEO’s name, or the marketing manager who left 5 years ago. Whatever the situation, you need to check your admin roles. Make sure that the current page admins have live and working profiles and that the ad account is linked to one of them.

2. Get a Grip on Algorithm Changes

Research from Social@Ogilvy found that for Facebook business pages with more than 500,000 likes, organic reach was as low as 2%. And this was before the most recent update rolled out. In January 2017, for example, 41% of BuzzFeed’s desktop traffic came from social media. However, this portion dropped to about 25% in December 2017. Similarly, Vice’s social channel traffic dropped by 18% during the same period and Mashable’s dropped by 12%, according to SimilarWeb.

Nothing and that’s the problem! Many of us (myself included) have not done enough to respond to the social media updates, especially the drop in engagement on our Facebook pages. Of course, failure to sit up and act will only result in a continued drop in traffic, leads, sales and results and that’s not good news for social media managers.

It’s not all bad news though. In a press release by Instagram, it was announced that their feed will go back to chronological order, meaning newer posts will likely appear first. This means that your content is more likely to be seen organically… YAY.

It’s crucial that you start setting yourself some social media KPIs so you can track the performance of your posts and aim to improve your reach and engagement.

Consider utilizing videos and GIFs if you haven’t already. Create authentic storytelling campaigns, incentives, conversations, and behind the scenes posts to up your audience participation. You’ll also need to reassess your ad spend if you haven’t already. The days of a boost being a nice little extra are long gone. Now it’s a tool for survival.

Of all the social media updates, this one will break a lot of hearts around the Twittersphere. But it’s coming so you need to prepare for it.

Currently, verified Twitter users proudly display a blue check mark. This check is usually reserved for celebrities, big brands, and well-known figures making it something to aspire to. But there’s a perception problem because users think of the check as a badge of credibility and a sign of Twitter’s approval.

Cast your mind back to last year when Twitter was met with a fierce backlash after the platform verified one of the organizers of the neo-Nazi march in Charlottesville.

In the wake of the scandal, the good people of Twitter suspended the verification program. CEO Jack Dorsey recently discussed the idea of self-verification for all users in a 47-minute live-stream on Twitter’s Periscope. He stated that “The intention is to open verification to everyone and to do it in a way that is scalable where Twitter is not in the way. And people can verify more facts about themselves, and we don’t have to be the judge or imply any bias on our part.”

While Dorsey has yet to elaborate further on what this crowd-sourced verification process looks like, we can speculate that it may be like that of other online communities. Airbnb, for example, requires you to submit a Facebook profile, telephone number, email address, or a government-issued photo ID.

If you’re a big brand or celebrity, then you’ll probably be worried about impersonators. Assure followers that your feed is the real deal. You can do this by updating your profile description to include your official website, links to your work and a cover and image that is clearly authentic. Regularly check for impersonators and report them to Twitter. You’ll need to be more vigilant and warn followers about any brand impersonators falsely representing you on the network.

2018 is the year of data protection and with the new GDPR rules coming into play in May, companies are being forced to sit up, take notice and make substantial changes. In fact, you may already be seeing your inbox fill up with social media updates like this from all the big brands: 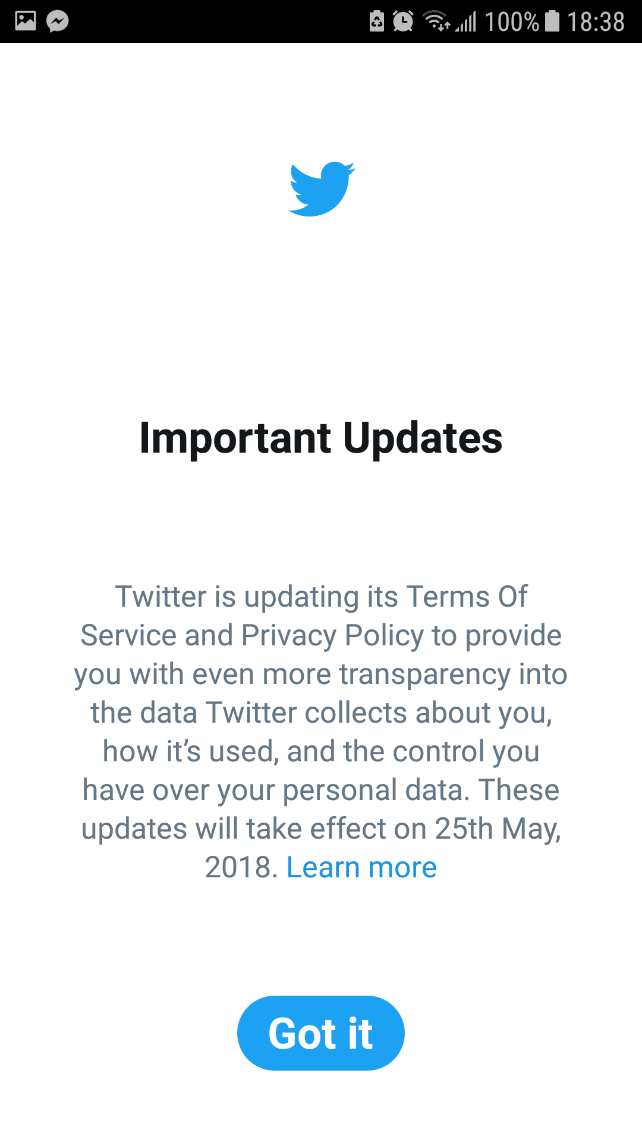 Facebook has also been rolling out social media updates that are all aimed at closing loopholes following the Cambridge Analytica data breach.

There are a lot of data updates involved, so let’s look at the main ones. Firstly, Facebook will launch a certification tool that will require advertisers to pledge they received permission to use the data. Secondly, it will be getting tougher on discrimination through advertising and data sharing. Lastly, it has shut down Partner Categories, an ad tool that allowed marketers to target ads using third-party data from data brokers.

The Custom Audiences certification tool will affect Facebook advertisers who are accustomed to uploading CSV files containing data for retargeting. Advertisers will now be required to confirm that user consent has been obtained. While the tool isn’t live yet, we know one thing for sure. If you are using a bought list, old sales list, non opted-in data or anything else then you need to stop. It is likely that Facebook will require proof that you built your list legitimately. If you can’t provide that then you won’t be able to use the tool.

Discrimination via advertising preferences is changing too. Thousands of categories have been removed from exclusion targeting including race, sexual orientation, ethnicity, and religion. Advertisers, especially those in the housing, finance and credit sectors may already have encountered these warning messages. 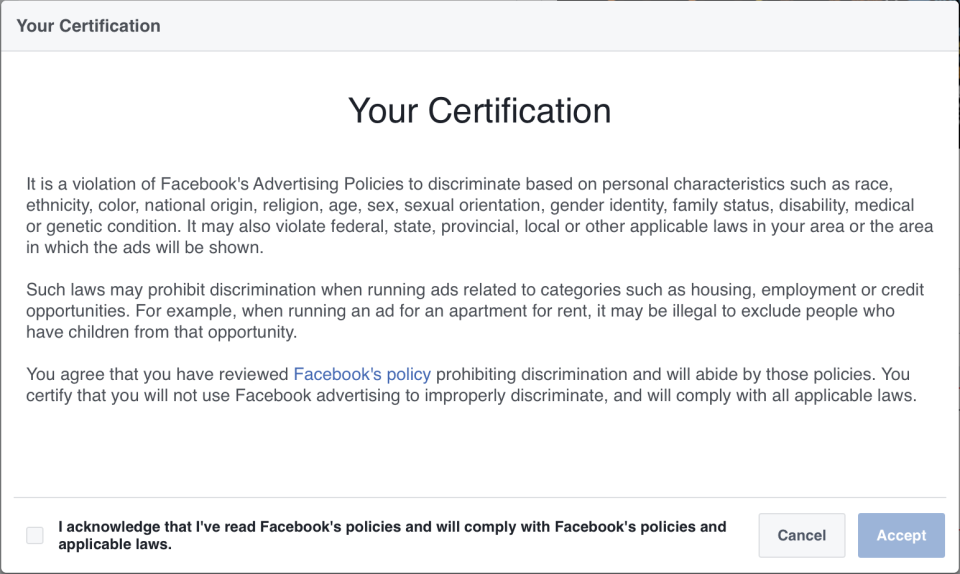 The fine for breaking the new GDPR act which centres around data protection is 20 million Euros. No one wants to owe that.

That’s why it’s time for you and your team to review the data you’ve been using for retargeting. We all have an old list that we can’t quite account for, but this is a period of amnesty. If you can’t account for it then delete it. It’s also worth taking screenshots of any Facebook warnings and getting your company lawyer or compliance officer to review them. This will help the company bosses understand that data protection and discrimination rules apply to social media too.

So now we’ve covered all the scary stuff… phew! Let’s look at some of the lighter changes which have been introduced across our favourite social media networks in recent months.

Facebook introduced Dynamic Language Optimization to enable the creation of multilingual ads. This is great because it means we don’t need to create multiple ad sets for all the different translations. Now, you can create a single ad and choose from up to six different language translations. 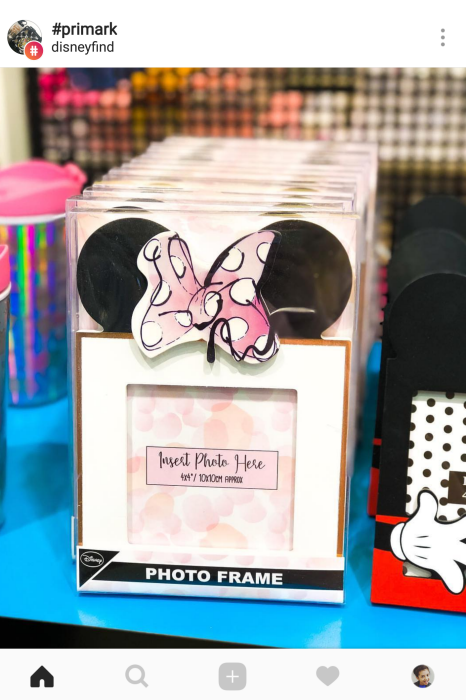 Social media updates are happening on LinkedIn too. Users can now enjoy an immediately accessible GIF library within their message flow. That certainly makes for friendlier networking.

Living with the changes

The recent social media updates do seem scary because there are so many of them. However, many of them simply require brands to be honest, transparent and fair and I believe that can only be a good thing in the long run.

How are you handling the ongoing updates? Tweet us and let us know.

7 Reasons to Go Beyond a Social Media Analytics Spreadsheet

Agorapulse vs Sendible 2022: Which Is the Better Social Media Management Tool?