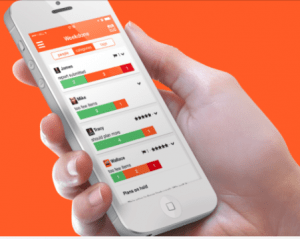 Working for a social media tech start-up is exhilarating!

We’re working on the latest trends, staying on top of the latest innovations and meeting challenges that didn’t even exist three months ago. Once you think you’ve got the hang of it, the ground beneath your vehicle changes.

We’re constantly changing tires while moving at 50 mph. Let’s face it, our 11-person team could run the risk of being scattered and confused even if we were sitting at the same table in the same office every day. Add the fact that we’re working remotely from Paris, Poitier, San Francisco, and Mexico City…

Thanks to Weekdone’s team management software, we’re remote, but not scattered, operating efficiently in over 120 countries.

Our first tool was email. I don’t have to tell you how messy that was! Each of us were already receiving a minimum of 30+ emails per day before all the interoffice communication. Conversations in multiple scattered threads with different titles began to add up. Changes, updates and due dates? Lost in the muck.

So, we added Google Docs, and it was great! At first. Creating one centralized task list was impossible, and changes to scattered task lists often required making copies of each doc before gaining final approval. It wasn’t long before our Google drives mirrored our hectic email inboxes.

Not to mention the only way to keep track of each change was… email! This was not improving communication in our team!

Bringing it all together

What needs to be done

Like you, we divvy up tasks to accomplish a larger goal, and it’s essential to know who’s working on what and how much they’ve accomplished.

Each Monday, I use Weekdone to create a task list, visible to all, of what I’ll be working on through the week, and as I move tasks from the ‘Plans’ to ‘Progress’ section of my form, everyone can see what’s been accomplished.

Even more awesome: anyone on our team can assign tasks to another.

Weekdone allows every member of our team to assign tasks to one another.

Voila! A clear view of goals and accomplishments.

Precious time once lost to video conferencing and sifting through emails has been reduced to writing a single note on a teammate’s Weekdone form.

My teammates and I can see which tasks have been accomplished.

Weekdone allows us to see each team member’s progress

And, which ones have been put on hold.

More importantly, we can see why some tasks have been put on hold.

I’ve worked in heavy bureaucracies before, and paid witness to the nightmare that occurs when nobody understands anyone else’s workload. Thanks to Weekdone, I know how busy my teammates are, what they’re busy with and what their priorities are.

Team cohesion is like air. Neither is a big deal until you don’t have it!

I spent some time on a factory floor right out of high school. When the production line balked behind me, my immediate supervisor, whom I dubbed the ‘Look busy bird’ would come fluttering by squawking at the top of his lungs.

So I kept a broom by my station. You could’ve eaten off the floor beneath my work boots!

We don’t have time for any of that. ‘Get sh*t done’ is the mantra of tech start-ups. At the end of the week, my bosses could care less how busy I looked during official work hours. They need to see what’s been accomplished, and what’s still pending, and that’s exactly what Weekdone was built to do.

Damn, I miss my homies sometimes.  We’ve built an amazing product, and if you ask me, it’s the best social media marketing and management platform for businesses.

Weekdone’s social interactions (likes, comments) don’t just allow us to discuss tasks, they make it easier to connect as co-workers and maintain that cohesion that’s as precious to productivity as air.

Not to mention, some weeks my list of accomplishments isn’t as long as others, and Weekdone’s comments feature is a good way to explain why a certain blog article or video tutorial took longer to complete than others.

We still use email and Google Docs. And, we still like to see each other’s faces on a video conference, but thanks to Weekdone’s team management software, we use these tools efficiently.