Alert! Making the Local NewsGoing Live in 3, 2, 1Soup of the DayDelete, Delete!We’re all humanIn Conclusion

Alert! Making the Local NewsGoing Live in 3, 2, 1Soup of the DayDelete, Delete!We’re all humanIn Conclusion

If you work in social media, you’ll be no stranger to making a mortifying mistake or two. Being a social media manager can be the absolute best at times, sure. You get to use your creative powers daily, see trends develop firsthand, interact with your audience, and more. But you probably also know the downsides that come from this job, including that “my-world-is-going-to-endddd” feeling when you make a mistake.

To help you get through these “only-funny-when-you-look-back” situations, we at Agorapulse have brought together social media managers from across the globe to share what it’s really like to work in social media today in our podcast Confessions of a Social Media Manager. (Where else are we going to vent about these situations?)

But why are mistakes in social media so, well, mortifying?! You can thank a melting pot of ingredients, starting with the fact that right now there are around 4.62 billion people on social media, a colossal audience that’s growing daily. Sprinkle in that the pandemic has put even more pressure on social media to be the public voice of companies, and add in a pinch of fast-moving energy, as this relatively new industry is still finding its feet.

In this article, we’re revealing just a few of the mortifying mistakes made by our guests, who manage the accounts of big brands like Innocent Drinks, Deliveroo, Canva, Etsy, Ogilvy, and more.

You’re probably aware of a crisis management policy at your organization, which guides you on how to manage a PR storm on social media. But what if you are causing the panic and crisis? What happens then?

In Episode #9, of Confessions of a Social Media Manager, we spoke with Alexa Heinrich and Austin Braun, the team behind Social Media Tea, an account dedicated to highlighting the voices and realities of those working in the social media industry, which has amassed over 35K+ followers and over 13K+ anonymous confessions.

Austin explained his most mortifying moment:

“I was fresh out of college, and I was still learning the ropes of social media. A fire alarm had gone off in the building, but no one really knew what’s going on … and I was like, ‘Oh this is a great opportunity to use social media to communicate.’ So, I tweet out, ‘Alert – The fire alarms are going off, we’re aware, follow the official account for updates as they come,’ with a little red emoji.

“I quickly learnt that using the word ‘Alert’ is a very pointed word to use in uncertain situations to say the least. It drew attention to the local newspaper and the police department, who reached out to explain the wording, and at that point I was like, ‘Oh boy, this is [pause], OK, I understand, message received!’ It was never done again. But it became a joke in the office, like ‘Oh my gosh, the AC has stopped working, ALERT! Tweet it out!’”

Ah, the old “Am I connected?” question when you start an Instagram Live. Who hasn’t dealt with that? Well, beyond the typical uncertainty that you get when you launch, have you ever started talking, got right into the event, and then realized you weren’t recording?

In Episode #1 of the podcast, we chatted with the self-confessed Gossip Girl of the social media industry. This anonymous genius is the face behind the ‘Work in Social They Said meme account, which has amounted to over 70K+ followers in a very short space of time.

They explained: “I’ve got so many mortifying mistakes … Like when I started a Live and then had to re-start it because I thought it wasn’t filming. It turns out it was filming, so halfway through I was like, ‘Oh, hang on a second, I’m just gonna now start this live.’ And they were like, ‘Oh, no, no, you are actually live,’ and I was like, ‘This is so embarrassing!'”

Soup of the Day

Sometimes, having a team that lets you unleash your creative freedom can have its downsides, as well as its ups.

In Episode #2, we spoke with Connor Smith from Topgolf, who launched the company’s TikTok account (and got 300K+ followers within one year). Connor dished how he often throws caution to the wind to get a laugh from the audience, but how it’s sometimes worth getting a second opinion before you post!

“I think it was national tequila day, and I put a blurry cup of tequila, and said, ‘Soup of the day,’ and posted it while I was on an airplane traveling to another venue. And by the time I got back, by the time I landed, it was, like, World War III, so things like that I guess, routing it through the proper channels … Whenever you feel like it might be on the edge, maybe get a second opinion!”

Posting your personal photos, videos or messages on a company account is one of the most common mistakes. It’s too easy to do, and it can happen in just the click of a finger.

In Episode #8, we spoke to Jacky Barker from Canva, who confirmed that she has also fallen into this trap: “I think this is just a standard one, but I think everyone has accidentally posted something on an account when they shouldn’t have. You switched on Instagram, you’re in a different account, you’re just browsing through … I accidentally shared something to a story, but very quickly I was like, ‘Ahhh!’ I got an instant feeling. I just knew. I was like ‘Delete! Delete!’”

No doubt you’ve got your own stories to share, but don’t be too hard on yourself! In the words of the creator of Work in Social They Said:

”My entire career has been about trying things, and then just watching them crumble in flames, and realizing that’s actually not the way to do things. It’s all about trial and error, and just throwing things up against the wall and seeing if they stick, really. Chaotic!

“My motto is: Always moving forward, never looking back, unless it’s to make sure that I’m getting better.”

Join us for the second season of our podcast Confessions of a Social Media Manager to laugh, cry, cringe, and gain some expert knowledge and raw insight into one of the fastest-moving industries on the planet on the way.

There are 11 episodes waiting for you, perfect to listen to during a lunch break. See you there! 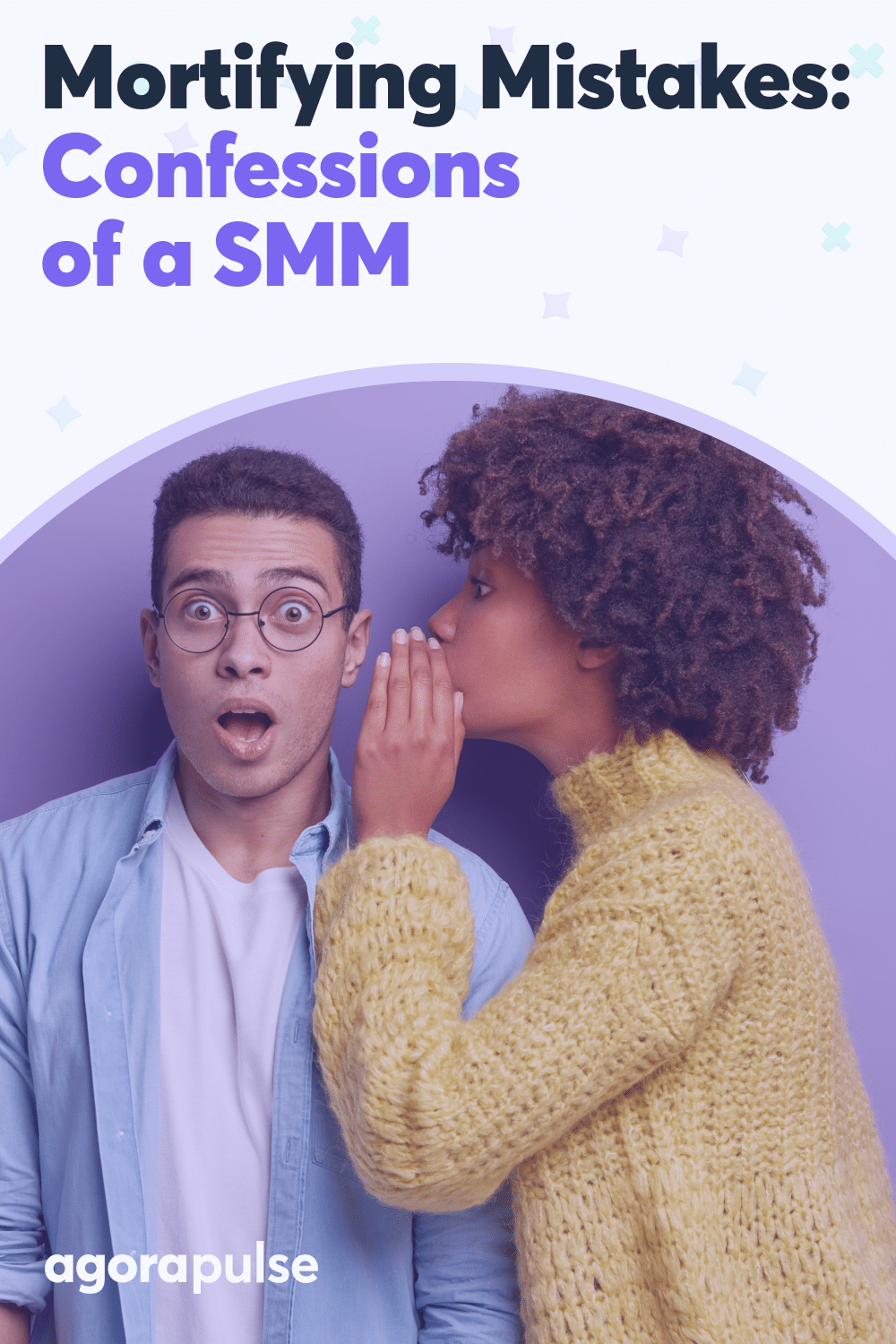