They may only be 140 characters long, but we still have to think about what goes into our tweets if we want to better our business.

Thankfully, we (generally) know what works and what doesn’t, which Twitter stats will help produce results, and which ones won’t. Chances are, you’re doing many things right!  We’ve broken down this HubSpot infographic to give you a little affirmation on what you’re rocking, and to give you a little boost where you need it.

Your Twitter following calls for variety. And when it comes to content, you have two kinds of tweets to work with – title tweets and copy tweets. Short and long. To-the-point and elaborative.

Title tweets perform a little better – last June copy tweets averaged 110 clicks each while copy tweets were just below that at 98 clicks.  Don’t just stick with title tweets – your audience will get bored.

We recommend alternating between them. 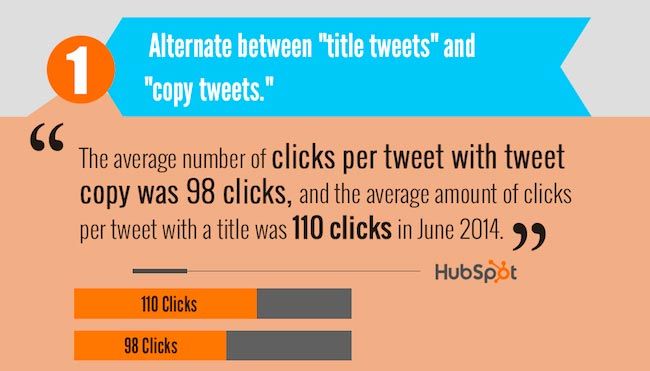 Your tweets may be clever, and you may be able to say a lot in 140 characters, but no good Twitter strategy stops with Twitter. Direct your followers off the social network from time to time- your website, a press release or a product page for a newly launched product, can be optimal.

Whatever it is, include a short link in your tweets so your followers can get there easily. Be sure the link is short, though. Use Bit.ly or Goo.gl to get the job done. 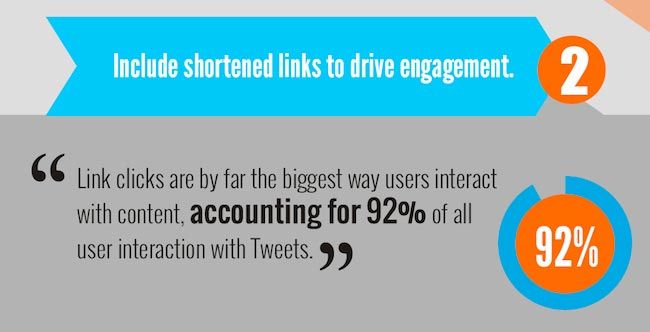 [Tweet “Don’t tell your followers to go to your page – tweet a short link to get them there.”]

Copy, however well-written, takes a little imagination. Generally, we respond better to the immediate and visceral nature of images.

Tweets with images receive 18% more clickthroughs, 89% more favorites, and an extraordinary 150% more retweets. Those are metrics you can take to departmental meetings with confidence.

Make sure your images mean something, though.  They should be relevant to your brand, product, or the point you’re making. 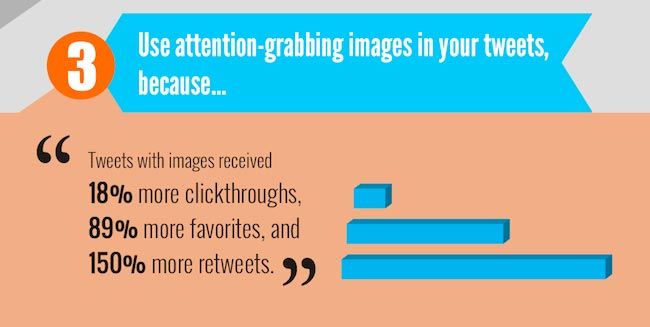 It might come across as hard-selling to ask for re-tweets, but trust us – it isn’t. You’re not pitching for users to buy anything. You just want a little of their time to click a button on a social network that’s made for sharing.

So, ask, but remember to spell out “retweet” instead of abbreviating it as “RT.” It’ll take you from an average 10 fold increase in retweets to 23! 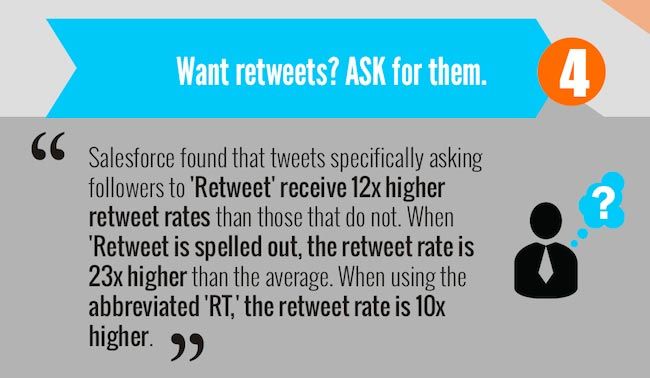 Be it retweeting, favoriting or clicking a link, you can achieve business results on Twitter.  Just don’t hamstring yourself with passive language. Think back to your English classes and choose a powerful, actionable word instead – like “download.”

It’ll increase your clicks by 13%. 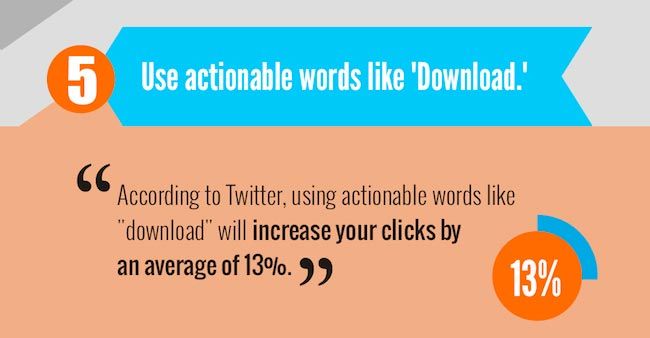 Tweets can be evergreen like blog posts. Your content is a business asset. And it’s not single-use. It’s something you can recycle and reuse.

You won’t lose much by recycling and reusing your tweets. In fact, you’re likely to get as many clicks as you did the first time. 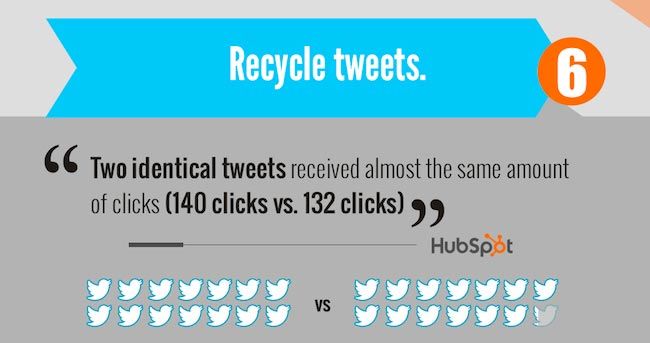 [Tweet “Save evergreen tweets for those times when you just don’t have anything else.”]

Depending on your industry, this may be easy or hard to do. If you work in social marketing – like us! – it should come naturally. But hunting suppliers and industrial chemical producers will probably have to work a little harder.

Still, if you can, tweet about Twitter. Think of a topic that involves Twitter – or any social network – and ask yourself if you can relate it to what you sell or who you are as a company.

Your followers will be more likely to click – and read – your tweets if you do. 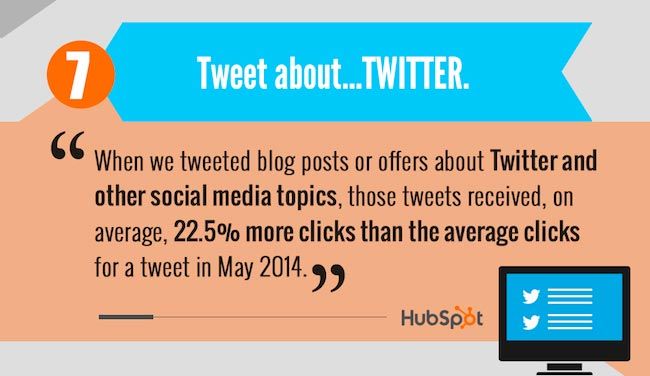 After looking at over 1 billion tweets from the past couple years, HubSpot saw that 91% of mentions came from accounts with fewer than 500 followers.

As you probably know, 500 isn’t a record-breaking number on Twitter. It’s actually pretty modest. If they can do it, you can too. 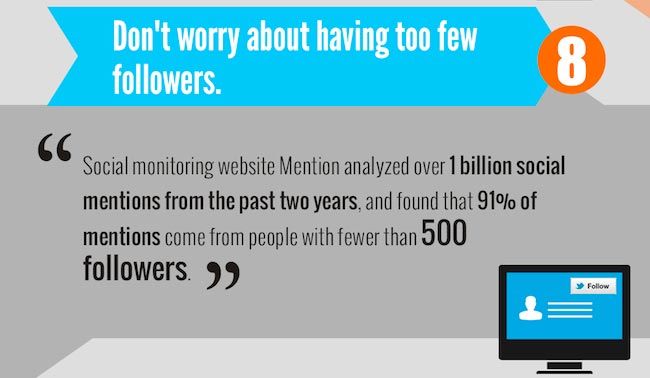 [Tweet “Most mentions come from ​accounts with fewer than 500 followers. You’re never too small to get a mention.”]

There’s something to be said for limiting your competition.

If you move into a crowded industry you’ll be up against a lot of people. Many of them will likely have more experience (and talent) than you, but even if you’re the best, you still have to fight your way through the rest who are trying to get noticed.

That’s a waste of time, frankly. Try tweeting late at night during “off hours.” Your followers will see fewer tweets from other accounts – your competitors – and be more likely to retweet you instead. There’s simply fewer alternatives available.

The path of least resistance is a very effective one. 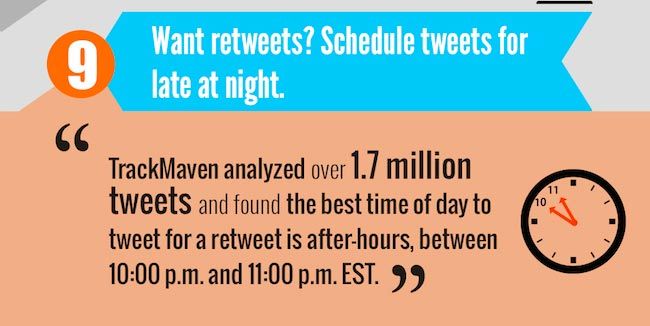 [Tweet “10 PM and 11 PM EST is the golden hour for retweets, generally speaking.”]

Whether or not your Twitter account is meant for customer service and customer interaction, it’s going to get it. You can’t just tweet away and not expect anybody to tweet back. What’s more, the people responding won’t be patient. Most users expect to hear back within an hour when they reaching out to brands on Twitter. 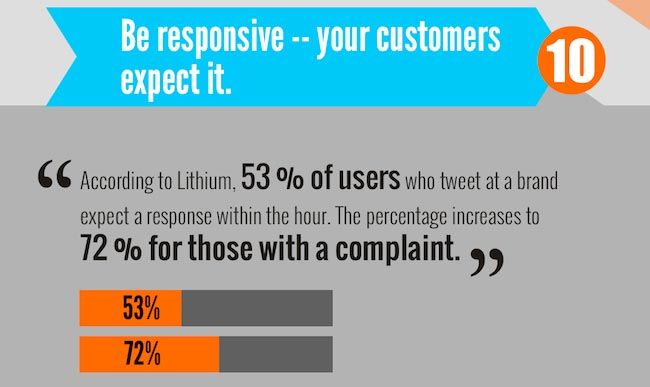 11.  Statistics for Reach, Not Clicks

Looking from one angle, statistics are a good thing to tweet about. Tweets that included metrics were retweeted 5.4% more than average last May.

From another angle, however, they’re kind of worrying. Those same tweets got 32.7% fewer clicks per tweet.

If it’s reach you’re after, put those numbers in. If you’d prefer clicks, then don’t. 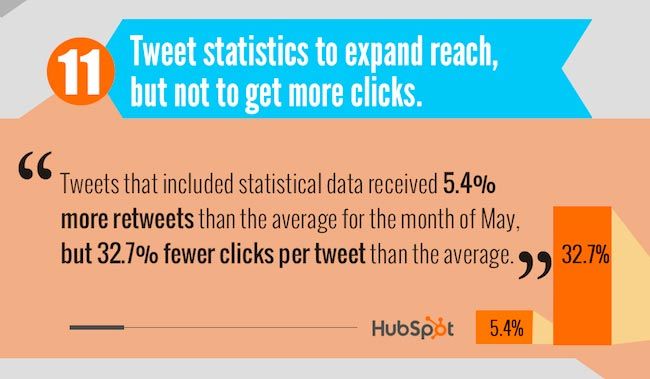 [Tweet “Statistics aren’t always right for you. They drive reach but reduce clicks.”]

Ambiguity has a place in writing. It works – creatively and professionally – some of the time.

But when it comes to moving visitors down the funnel, you can’t afford to be opaque. Plainly say what you’re offering.

Tweets including clear offers got 18% more clicks and were retweeted 30% more often. And that’s compared to tweets with the same offers – the same accounts, the same brands, the same everything – worded in vaguer language.

You can’t afford to hide your intentions. 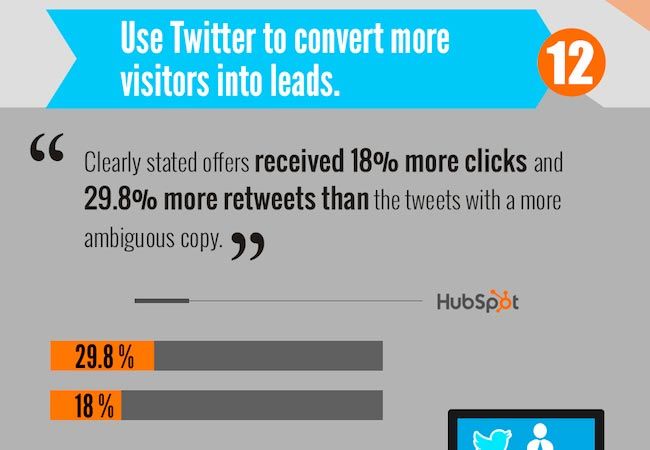 Of course, your Twitter strategy is more complex – and more personal – than the 12 general pointers here. But these do work.

Just A/B testing a few of the more variable ones – like posting time – to see what’s right for your unique business needs.

And don’t forget to visit the original infographic at HubSpot!