I don’t have to remind you that Facebook is good to advertisers.

And, that it’s not just the platform itself, or the wealth of data it offers, it’s also the tools Facebook builds and releases – month after month, year after year – that make it an integral part of any social advertiser’s repertoire.

In this post, I’d like to turn your attention to one tool that’s a key to getting social media ROI and is simply not taken advantage of as much as it should be.

It’s generally understood that warmer leads are better than colder ones.

If you’re marketing to prospects who have already displayed an interest in your product or brand – or, better yet, if they’ve bought from you before – you’re more likely to convert them. And when we think about that in terms of Facebook advertising, there are definitely a few customer groups that qualify.

They’re all high-value customer groups, and with Facebook Lookalike Audiences, you can duplicate any of them.

This tool lets you take one of those customer groups as a “seed” and create another audience – instantly – that resembles it. Just like that. With only a few clicks, you get a free list that might otherwise take a long – and expensive – customer acquisition campaign to build.

These customer lists are taken from a Website Custom Audience, the Facebook fans are users who’ve liked your Page, and the website visitors include anyone who’s taken a specific action on your site – even just browsing – that your Facebook conversion pixel has picked up.

These Lookalike Audiences can then be optimized in one of two ways.

Similarity is more precise. You’re going after users who most closely match the ones in your customer group. And that gives you the best chance of converting them, because they’re as targeted – or warm – as they can be.

Reach is more general. You’re hitting as many users as you can – not necessarily the most similar, but the level of similarity is still high – for a broader sweep. If you’re interested in brand exposure, this is usually the best way to go.

[Tweet “Facebook Lookalike Audiences are a two-for-one deal. Why not take more of a good thing – for free?”]

Thankfully, it’s a pretty simple process. I’ll walk you through it.

It’ll either be a custom audience, conversion tracking pixel, or a pixel – the same groups we talked about before.

Next, select the country you’re targeting. You can only target one country per Lookalike Audience.

Finally, optimize for Similarity or Reach. 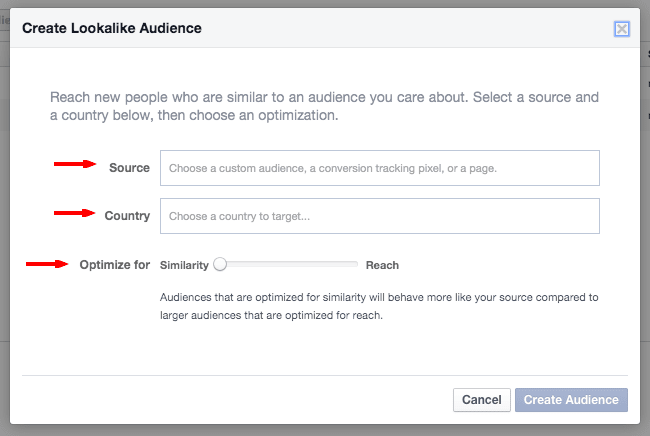 I’ll answer that with a short case study.

At AgoraPulse, we ran an advertising campaign in Chile recently, and Lookalike Audiences were involved.

Strikingly but unsurprisingly, the Lookalike Audiences performed very well. In fact, the one optimized for similarity converted a lot better than a few audiences based on interest targeting.

The Chile Lookalike Audience 1% (similarity optimized) had a 7.3% conversation rate. 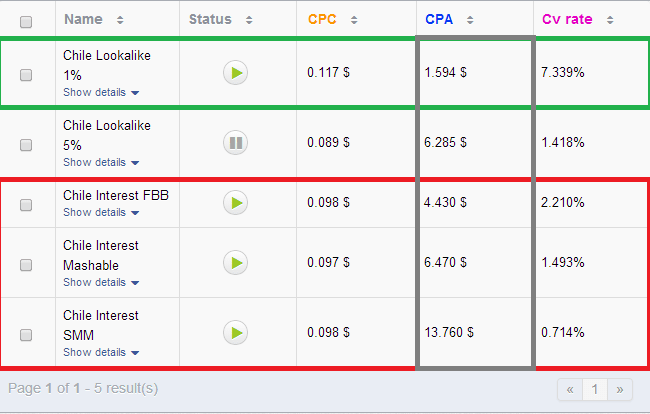 When you optimize your Lookalike Audiences for similarity, the conversions can be dramatic.

But if you’re interested in reach, optimizing for that can still be very effective.

You’re still going after a comparable user base after all, one that’s more closely related to your original list than what you’d get by interest targeting. It may be a blunter tool, relative to similarity-optimized lists, but it’s still sharper than many other kinds of targeting.

That said, we’d love to hear from you.

Have you worked with Lookalike Audiences before? What’s your favorite customer group to use?

And if you haven’t taken the plunge yet, tell us what social customer acquisition is like for you. Is it costly? Time-intensive?