Do Twitter Lists find their way into your weekly grind?

Would you like to be more organized in your business on Twitter as it pertains to getting new business opportunities?

By using Twitter lists to generate leads effectively, you can monitor great conversations already taking place, cultivate new connections and interact with the right people in a very easy way.

They key here is for you to create the list and have it be PUBLIC.

Make a list of people that you admire, respect, appreciate and truly respect within your industry and you’d like to get on their radar.

Once doing so, add those people to a public list (ex. “Industry Leaders”). Keep adding people to that list over time. Even though you can choose to keep lists private, when you make it public list and you add someone, they get a notification that they have been added to your list. This is exactly what you want if you are trying to get on their radar. 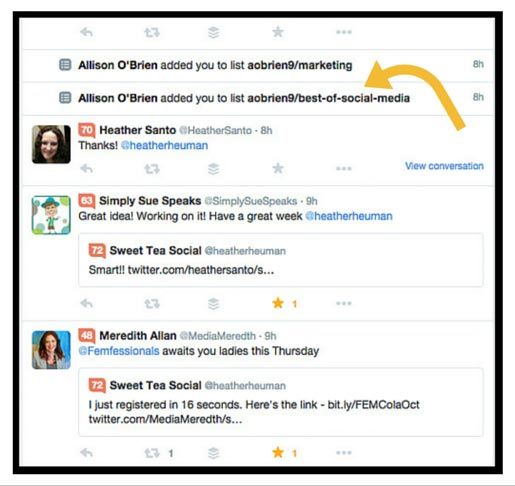 You can see by the arrow that Allison O’ Brian added me to her public list.

Whether you want to stay on top of those that are marketers, mompreneurs, or Huffington Post bloggers, subscribe to lists created by influencers. This will reduce your research time to creating these lists from scratch yourself and will jumpstart your ability to interact, retweet and favorite people on those lists. 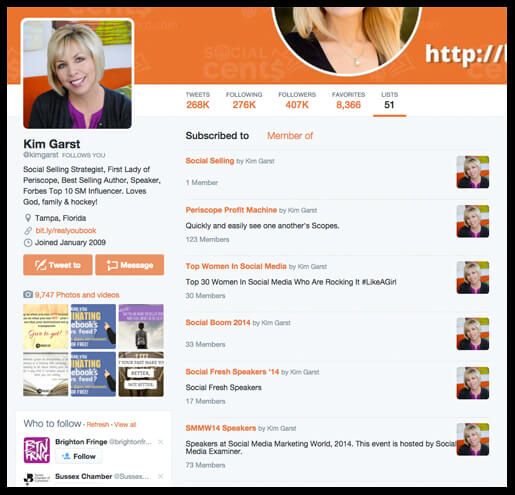 Here are some of Kim Garst’s Twitter lists that you can subscribe to rather than starting from scratch.

3. Create Lists for Upcoming or Past Events

Have you ever been to a conference and wanted to stay connected with those people you met, the speakers and more from that experience? Create Twitter lists prior to the event to leverage interactions prior to the event as well as keeping in touch afterwards in an easy way. 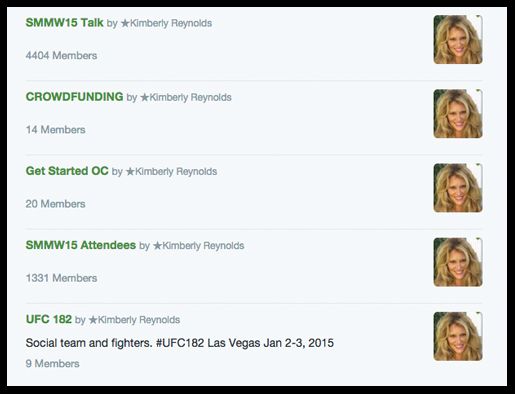 Kimberly Reynolds has lists for current and past events. 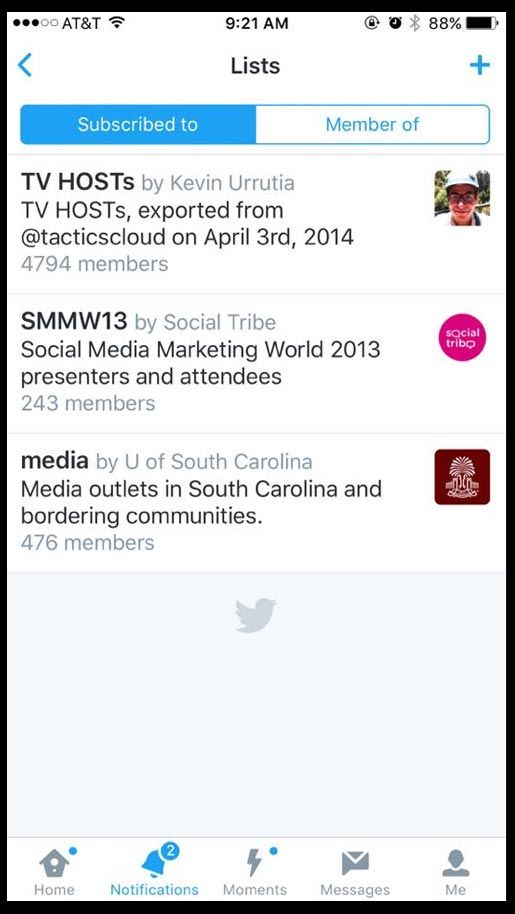 Meredith Allan of The Drive Marketing has several lists for media that she has subscribed to and now has on her Twitter lists.

If you have a Twitter list called “Amazing Customers,” make a point to tweet and interact with those customers. You will not only encourage the continued customer relationship but you’ll be on the journey of creating raving fans. Relationships are built stronger over the course of time and Twitter lists are a wonderful place to cultivate and strengthen those relationships. Just creating the list and not taking action would be a mistake.

Have you ever had someone that is an industry leader that you wanted to know you were in existence? Maybe you want to speak at one of their events or maybe you just want to grow and build a connection with them in the midst of all the noise on social media.  A way to do that is to interact with them on Twitter. Have a list called Industry Leaders and make a point to tweet them at least monthly with a personal message.

The key here is to interact with with your influencers. 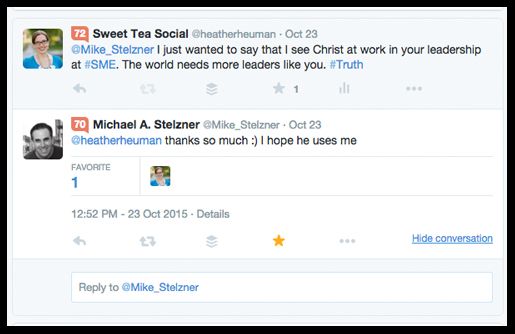 I reached out to Michael Stelzner, Founder of Social Media Examiner and he replied.

If you have a smart system in place with your Twitter lists then it will be that much easier for you to use those lists to generate new business opportunities.

Here are some suggestions on ways to organize your Twitter lists:

8.  Develop Resources for your Potential Clients

Create a Twitter list filled with great resources that you like and find to be very helpful for your target audience. For example, if you are a social media manager, have a list called ‘Time Saving Tools’ and in that list include the Twitter accounts of the various tools you find to be helpful such as Agorapulse, Google Drive, etc..

9.  Create Lists of People that Mention You

Agorapulse makes it super easy for you to monitor who mentions you, thus making it easy to add those people to your Twitter list. 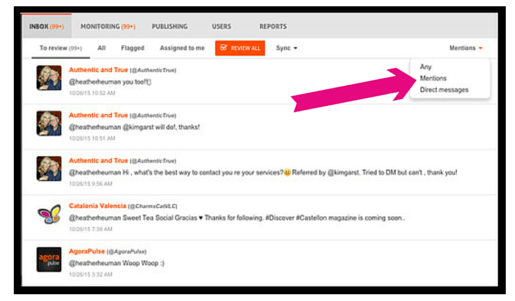 Using Agorapulse to track people that mention you on Twitter makes it easy to create Twitter lists with those potential new leads.

Twitter lists are a great way for you to keep your business prospects organized by content, location and much more.  When combined with the follow-up to interact with people you have on your Twitter lists, you have a wealth of information right at your fingertips that you can use to grow new business opportunities.

What is your favorite way to use Twitter lists? Looking forward to seeing your comments below.