Book a demo Start my free trial
Log In

Twitter seems so real-time that it’s hard to step back to see what you’ve done on the platform. Use one of these Twitter analytics tools to better analyze your performance (or someone else’s).

In addition to marketing your business and connecting with customers, Twitter is the best social media channel to spy on your Twitter competition.

Whether you use Twitter for publishing, monitoring, or customer service, you need to measure your efforts. Luckily, you can choose from a variety of Twitter analytics tools to help do this.

Which are the best Twitter analytics tools with which to get started?

The native analytics accessible through Twitter.com are extensive and great to use for reporting and analysis.

As soon as you log in to Twitter analytics, you’re presented with 28-day summary of your Twitter account along with a summary of each of the previous months. Make sure to select the right date period for which you’re pulling data!

The monthly summary is a great way to get a quick overview of your Twitter performance for each month.

On the left, you’ll see your tweet highlights, which include …

On the right, you’ll see a few key stats of your Twitter account for the month. These numbers are great for reporting purposes—to show your monthly performance and determine month-over-month growth.

Best of all? Twitter’s analytics are totally free!

If you’re running a hashtag-based campaign on Twitter, Keyhole is a great Twitter analytics tool for assessing hashtag data.

Keyhole’s real-time dashboard shows how many people posted with your hashtag along with the number of retweets, likes, and impressions your campaign generated.

Another awesome component of Keyhole is its ability to track the most influential people engaging with your keywords. You can then reach out to them to promote your content and increase your brand’s reach.

If your resources are limited, focus your time targeting the people who will help you garner the greatest ROI for your campaigns.

Keyhole’s dashboards are easy to read and share, too. I’ve worked on several social media events in which we’re tracking how the event hashtag is doing during the day. I could easily screenshot data from Keyhole and share it with the team.

The ability to identify influencers, monitor competing brands, gain a deep understanding of target markets, as well as track hashtags and keywords, allows us to easily gain insights that come in handy for future campaigns.

You can do a one-time search for free on Keyhole, and they also offer a free 3-day trial. If you want ongoing support, different pricing plans are available starting at $139/month.

Agorapulse’s Twitter report provides specific information for all the major elements. Tweets, mentions, retweets, and favorites are all included, in addition to top publishing and engagement stats.

The hashtag report also breaks down your top hashtags by interactions including retweets and favorites.

If your goals are to achieve more interaction, this will help notify how you should craft messaging moving forward. It’s also a full Twitter tool — including publishing (280 characters!), listening, and social CRM for your tweets and followers.

If you want to test out Agorapulse, you’re in luck! They have a free trial AND a free quick analytics tool  — Twitter Report Card. There are also a variety of subscriptions starting at just $49/month.

The most competitive aspects of Union Metrics‘ Twitter analytics are its competitive analysis and research components.

Users can stay ahead of the competition by analyzing their social activity and measuring share of voice.

Or you can combine powerful queries and historical data to uncover audiences, find relevant content, and plan campaigns. 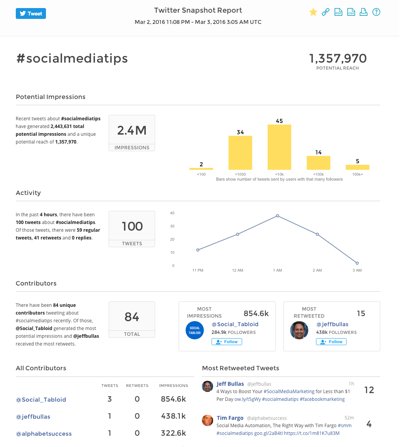 Union Metrics has some free elements like the Twitter Analytics Report, in addition to custom plans starting at $99/month.
Depending on your objectives, there are numerous Twitter analytics tools to address every need.

With these four awesome resources at your disposal, you can easily take your Twitter marketing to the next level.

If you liked this post, you'll love these related articles.

How Can Twitter Analytics Tell You If Your Tweets Stink?

Debbie has been working in digital marketing for over 7 years. She is the President of Social Hospitality as well as the Digital Marketing Manager for Restaurant365. She's written for a variety of Internet Marketing online publications including Search Engine Journal, Maximize Social Business, SEMrush, and Forbes. When she's not online, Debbie enjoys spending time with her spoiled dog children; watching movies; reading; and drinking copious amounts of coffee or wine.

Follow Debbie Miller on :
Interested in writing for us?
Keep up to date with social media marketing!
Our monthly newsletter's packed with the hottest posts and latest news in social media.

Want to receive the best of our blog every single month?
Yes, I'm in!

Join 7,000 subscribers and get actionable social media tips and tricks delivered straight to your inbox each month.

Our newsletter is packed with the hottest posts and latest news in social media that you don't want to miss.

By clicking on "register" you agree to use your information in accordance with our "privacy policy". You can unsubscribe at any time.

Phasellus quis ante. dolor. leo. libero Donec
By using this website, you automatically accept that we use cookies to improve your experience. For more information, refer to section 3 of our privacy policy here.I understand