Benefits of a Healthy Social Media Influencer Relationship1. You’re Experiencing Cancel Culture2. Engagement Is Low3. Trends Shifted Without You4. Your ROI Is Unsatisfactory5. Your Influencer Isn’t Following the Contract Rules6. Your Competitors Are Changing Tact7. You’re Getting Called Out for Being InauthenticIn Conclusion

Benefits of a Healthy Social Media Influencer Relationship1. You’re Experiencing Cancel Culture2. Engagement Is Low3. Trends Shifted Without You4. Your ROI Is Unsatisfactory5. Your Influencer Isn’t Following the Contract Rules6. Your Competitors Are Changing Tact7. You’re Getting Called Out for Being InauthenticIn Conclusion

Are you seeing red flags in your social media influencer relationship? Do you know the warning signs to watch out for?

It may be time to get relationship advice (or to say goodbye).

Here are a few of my favorite benefits of a healthy social media influencer relationship.

Though in our case financial regulators do govern your content (including influencer marketing), this route allows you to get more eyes on your brand without running ads. 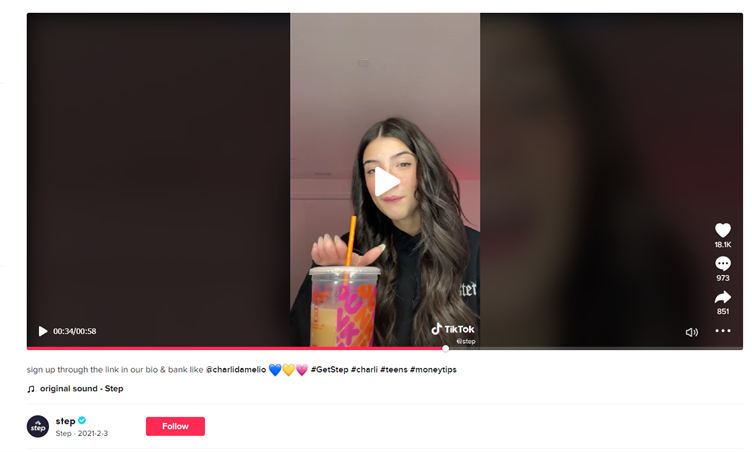 50%+ consumers state that word-of-mouth and social media are their preferred ways to discover new brands. This ties in well with the shift to micro-influencers.

Micro-influencers are defined as accounts with anywhere from 10,000-50,000 followers. They are increasingly popular with brands because they offer authentic engagement while also being a more economical choice.

An example of a great micro influencer relationship would be @plantmeashley on Instagram. Yes, influencers can be found in every space, not just fashion and beauty.

Plantmeashley is a leader in the plant community and often teams up with garden centers. With just under 28K followers, she is a great micro influencer with a dedicated fan base. She also posts about #Women #LGBTQIA+ and #TransRights making for some nice influencer marketing crossovers. In the post below she features a local garden center. 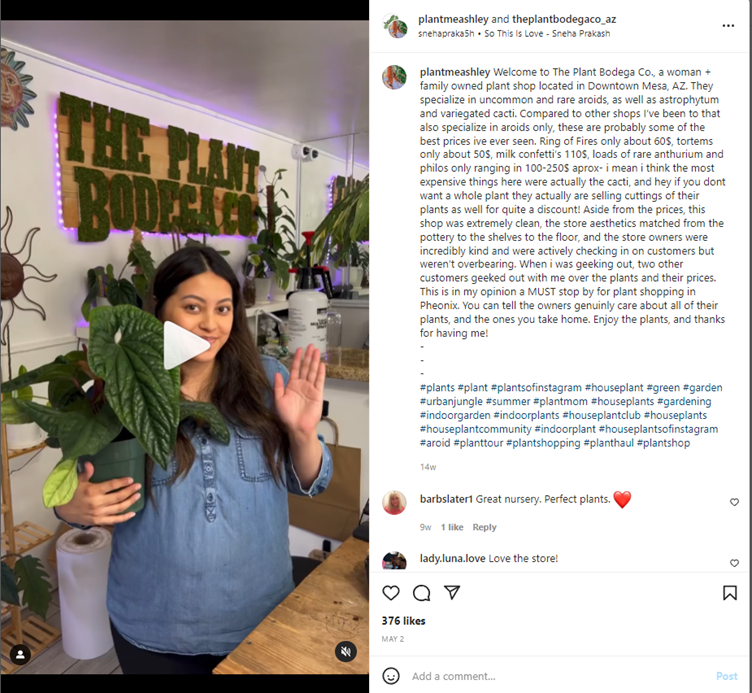 86% of influencer marketers are now actively using social media shopping to their advantage, and that won’t be slowing down anytime soon.

Each week, one billion people message a business across one of Meta’s apps, and they are continually introducing new ways to shop. The latest is Instagram chat shopping! 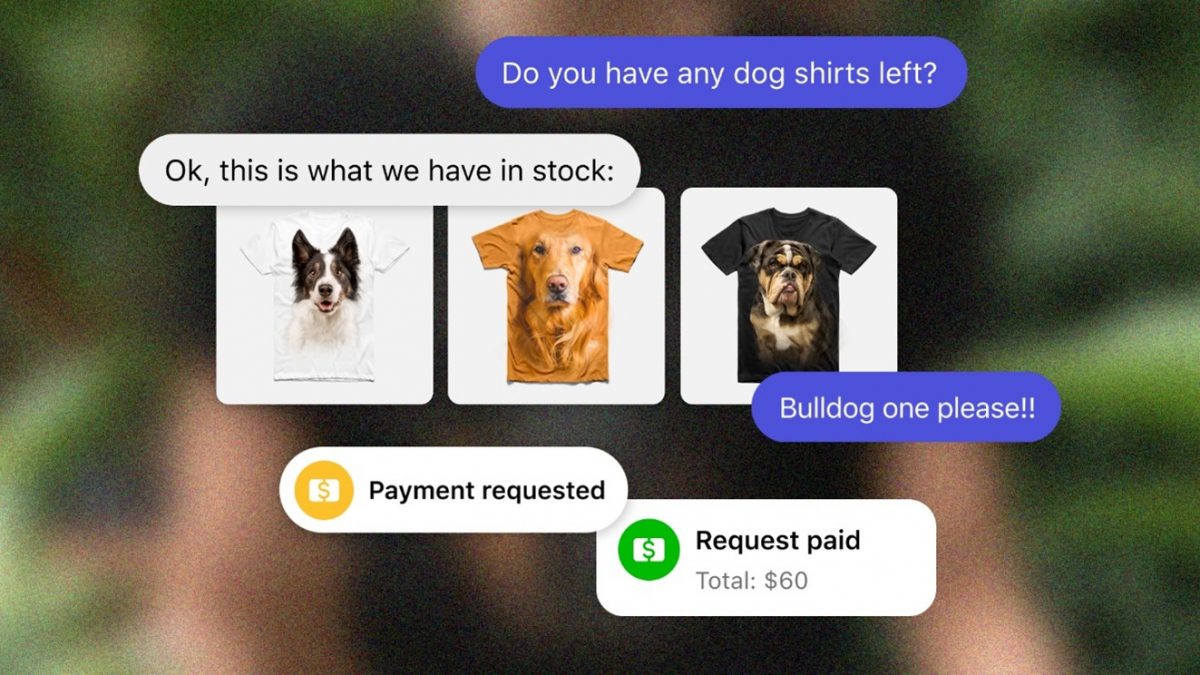 With the right content, coupon offer and promotion, influencers can drive huge revenue for brands.

Stats show that after seeing posts with product information, 87% of fans took a specific action, like following, liking, or making a purchase.

For example, fashion brands offer on average a commission of 16% for sales generated by their influencers.

Zara, a Spanish fashion brand, frequently utilizes micro-influencers in the fashion space. Zara was the most mentioned brand on Instagram in 2021, beating even Instagram itself.

We’ve talked about a few of the great benefits of influencer marketing. But what about when it doesn’t go so well?

Here are seven signs to look out for in your social media influencer relationship.

“The notion of cancel culture is a variant on the term call-out culture. It is often said to take the form of boycotting or shunning an individual (often a celebrity) who is deemed to have acted or spoken in an unacceptable manner,” according to Wikipedia.

Love it or hate it, cancel culture has become commonplace in the social sphere. According to the 2021 Porter Novelli Business of Cancel Culture Study, 38% of customers engage in cancel culture to change a company’s ways.

Cancelled influencers of the past years include Rachel Hollis, Tiger Woods, Michael Phelps, Maria Sharapova, Charlie Sheen, and Chrissy Teigan. Chrissy Teigen, was publicly called out for cyberbullying, including telling a teenage girl to commit suicide.

Both Target and Macy’s dropped her cookware line from their stores. The brands were left scabbling to distance themselves from the disgraced influencer, whose apology did little to sway audiences.

In some cases, influencers buy traffic and likes using bot accounts. Actually, it’s more than some.

More than 55% of Instagram influencers were involved in some form of social media fraud and fakery a study by HypeAuditor found. This is a very real problem and one that adds a layer of complexity to the influencer marketing mix.

That’s why it’s better to watch engagement than fan numbers.

Good engagement (over 3% of fans liking and commenting) is an indication that your influencer relationship is hitting the right audience spot.

These accounts have the highest and lowest suspected fake followers. Kylie Jenner has the highest number of suspicious accounts following her page on Instagram, at 106.2 million. Although to be fair, she didn’t necessarily add them herself. Page verification is not required to order bots. 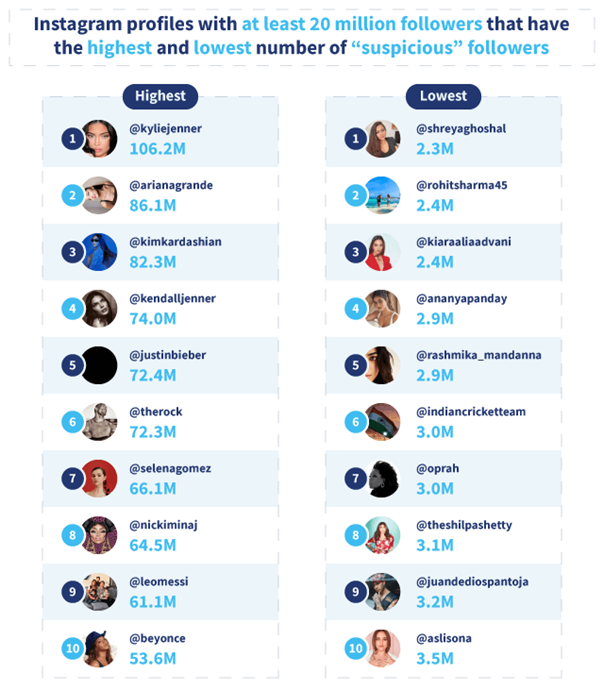 You can check post engagement rates in your Agorapulse dashboard. You can also dig into each post to see other stats like clicks, reactions, comments. and private messages.

If engagement isn’t what you expected, your social media influencer relationship could be in trouble. 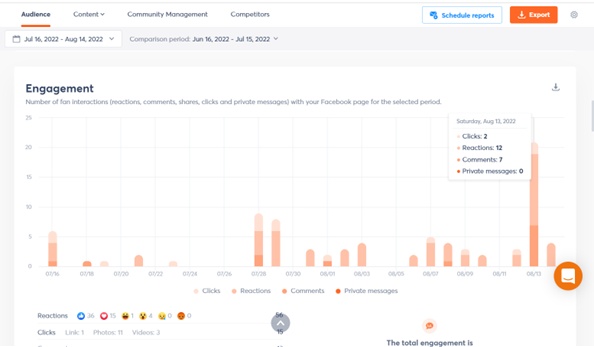 3. Trends Shifted Without You

If your target audience is shifting away from certain influencers and you haven’t done anything about it, you’re in trouble.

Many fans are ditching endorsements from celebrities and macro-influencers because they love the authenticity and personalized experiences that micro-influencers afford them.

Micro-influencers “boast up to a 60% increased engagement rate compared to macro-influencers.” They also have a 20% higher conversion rate that can help brands boost their e-commerce sales.

In addition to this, the public is fickle in regard to social media influencers they like and don’t like. Public perception can turn rapidly, and your influencer marketing relationship might be in trouble if you don’t pay attention.

“Genuinfluencers” was coined by WGSN (formerly Worth Global Style Network) to describe influencers who use their platforms beyond product placement. Genuinfluencers spread important information in addition to posts about products.

4. Your ROI Is Unsatisfactory

ROI (Return on Investment) can be easy to monitor for an influencer marketing campaign. Essentially it means the amount of revenue/ product sales generated by your collaboration.

If you’re focused on ROI, the only compensation model that will hold an influencer accountable, is Cost Per Acquisition.

Other methods like cost per click and cost per engagement are not directly linked to ROI. Unsurprisingly though, cost per acquisition is unpopular with influencers so it’s unlikely you will secure this agreement. You can, and should, still monitor it though.

How to calculate ROI for influencer marketing

How to Become a Data-Driven Agency and Prove Social ROI

This one pops up a lot and can be the cause of many social media influencer relationship breakups.

First, contract rules might be very restrictive and prevent the individual from their usual creative behavior.

Other reasons include failure to adhere to the agreed posts, not applying risk warnings, prohibited behaviors, or a breach of any anti-competitor clauses.

Certain industries are stricter than others and if you’re working in one of these you will need to be especially careful. Industries like finance and pharmaceutical are closely governed. This includes the risk warnings that need to be added to posts in addition to the disclosure that it is in fact a #sponsoredpost.

Sponsorship, largely from youth-focused fintechs, helped to make a “side hustle” out of content creation for influencers.

Timothy Paul, for example, was paid £800 for a single video in a deal with Mastercard and regularly makes finance videos. You can see though that _timpaul is applying risk warnings and is not saying anything non-compliant in his videos. 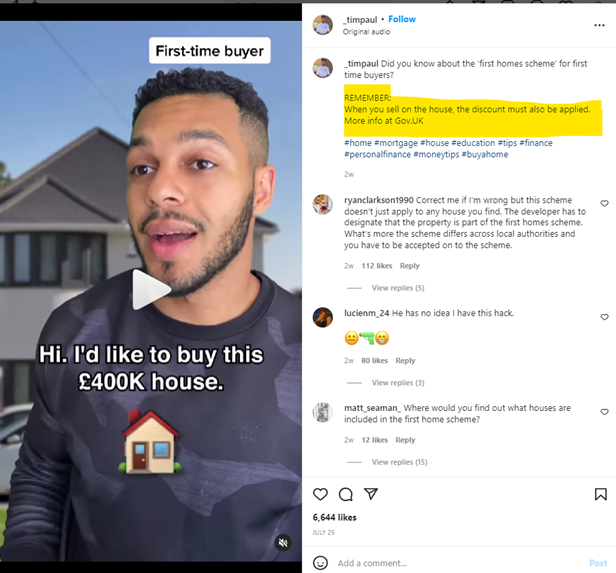 On the flip side, other influencers have landed brands in hot water for failing to include risk warnings or making false promises.

Recently, six influencers were subject to sanctions from the Advertising Standards Authority (ASA) for consistently failing to disclose ads on their Instagram accounts, despite repeated warnings. Francesca Allen, Jess Gale, Eve Gale, Belle Hassan, Jodie Marsh and Anna Vakili have all been named as not flagging ads in their posts. Of course, this also reflects badly on the brand and can result in huge fines. Especially in regard to to misleading promises. 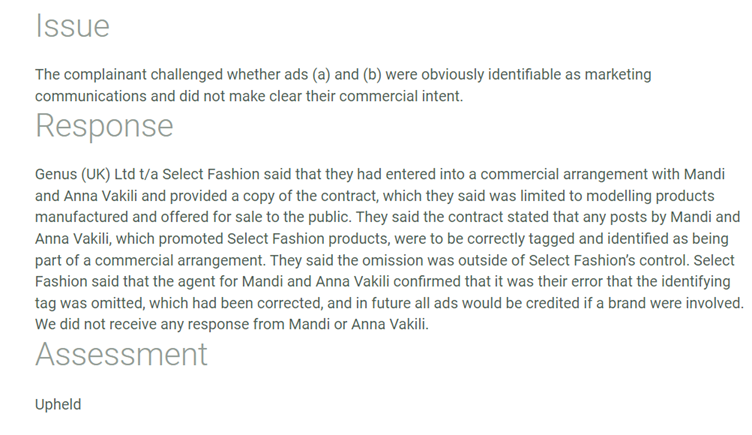 6. Your Competitors Are Changing Tact

Be aware of what the competition is doing and why they’re doing it.

If you find that most of your competitors are changing their influencers, it may be a sign. Or if they’re pivoting in a new direction entirely, that means dropping social media influencers and focusing on CSR (corporate social responsibility) UGC (user-generated content) or ploughing money into sports or billboard sponsorships.

Earlier this year, New York-based advertising agency Ogilvy announced they will no longer work with influencers who distort or retouch their bodies or faces for brand campaigns. This is in a bid to combat social media’s ‘systemic mental health harms, which have been well documented lately.

First, huge high five on this one for obvious reasons. Second, this is indicative of public sentiment about beauty filters so should be closely observed. Third, regulators are also involved with ASA banning misleading filters.

7. You’re Getting Called Out for Being Inauthentic

Audiences are very switched on to fake versus authentic. They know a filtered, photoshopped image when they see it.

They can also tell if an influencer if passionate about a product or just copying what you gave them for money. And more so than ever, they are not afraid to call it out and walk away from a brand.

I love this audience. They rebel against brands and social media influencers who think they can be fooled, and they vote with their wallets.

Here’s an example of a page that got called out by its audience. It was a page about plants that obviously received some financial incentives to promote weight loss products. Though not a social media influencer mistake, it’s not authentic. You can see the audience response. 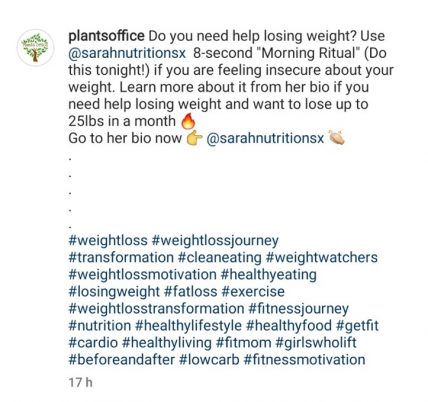 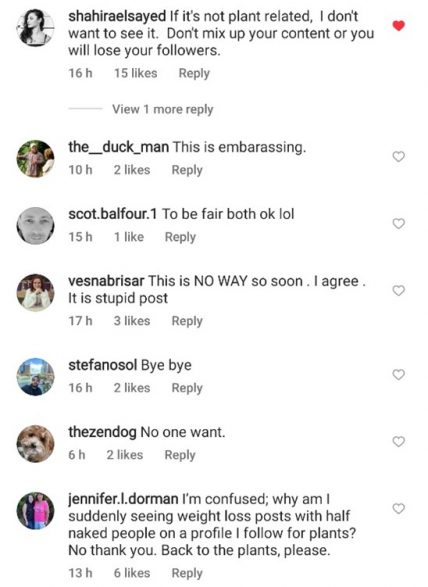 Instead, savvy brands are switching to influencers who align with their values and the values of their audience. Influencers like @ASIANACNEGIRL. American blogger Katie Guber started her Instagram in 2019 at the beginning of her self-love journey and has since come a long way with acceptance. She is considered a skin positive influencer.

Katie teams up with big brands to review their products in an honest and authentic way and coming from the stance of someone with skin challenges. For her 5K followers, this is an authentic and meaningful look at skin care. 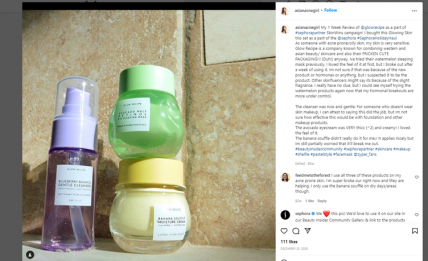 Fostering paid partnerships is not about advertising your brand alone but being able to connect with your audience at an emotional level. This is where an influencer’s storytelling capabilities are needed.

Watching out for warning signs can help you to salvage an influencer marketing relationship or politely move to a breakup. 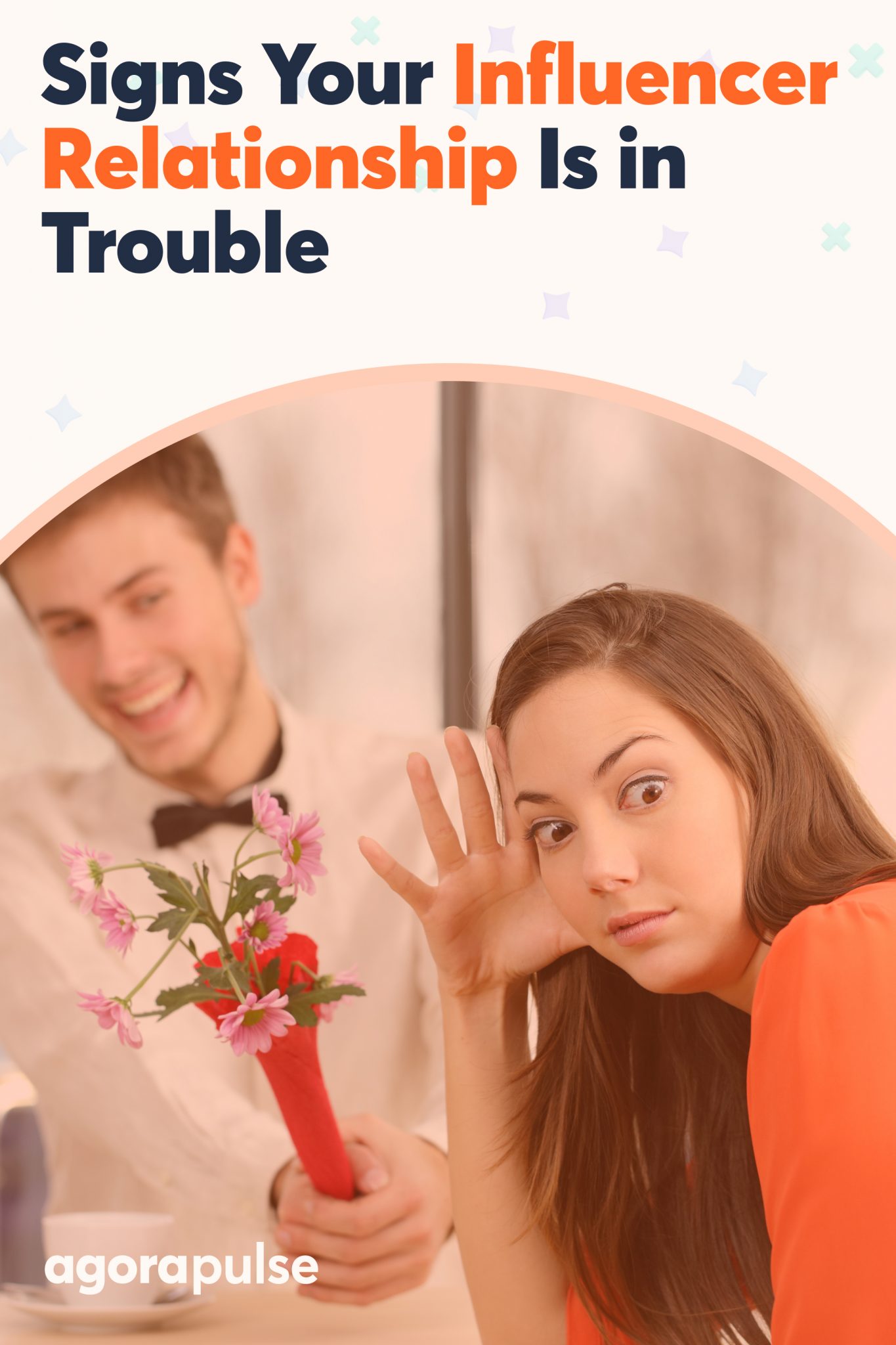 How to Create a Powerful Influencer Contract Template

How to Collaborate on Social Media Without Going Bananas