Ever hear a personal story that’s so captivating that you want to share it with others? At Agorapulse, we’ve heard some extraordinary stories from people who live life at a deeper, inspirational level. And we want to share them with you.

In this new series, we share the experiences of such people, one narrative at a time. We’ll dig deep into what inspires us about them, how they overcame daunting challenges that threatened to distract them from their focus, and what they’ve learned along their journeys. (Read part one of Ingrid’s story and part two.)

The plan was to follow in the tracks of Paul Emile Victor, French polar explorer who led more than 60 expeditions to the Arctic and Antarctic regions. Ingrid would be traveling 350km to the north of the polar circle, spending three weeks “in the heart of the world.”

She wanted to reach the ice cap and the Glacier Equii, which ends in the fjord 80 kilometers north of Ilulissat.

At least, that was Ingrid’s plan at the beginning of the journey.

Unfortunately, “the plan was wiped out by the absence of ice floes this year,” Ingrid says. “Too much storm, wind, and swells regularly dislocate it and carry it away.”

Here’s a peek at the journal entries from Ingrid during Plan B onward to Plan D:

“Going through the mountains and the mountains, crossing lakes, and the succession of ‘mountains’ with a pulk loaded with more than 80 KG of food and gear … This is our mission. But we’re going, we’re not giving up! Never give up!”

After flying from Montpellier-Amsterdam, Copenhagen-Copenhagen, and Copenhagen-Kangerlussiaq, Ingrid took a little break before the next two propeller planes (in the direction of Aasiaat then Ilulissat).

Ingrid’s Notes From the Journey:

“The Ice Sheet (ice cap) is the largest expanse of ice in the northern hemisphere. How beautiful it is!

“It’s pretty funny to take a look at Greenland in winter. The plane is almost empty … Who wants to go to Greenland in the middle of winter? You definitely have to be a little crazy.”

“We meet Paul who is going to hunt the musk ox in Kangerlussuaq. Peter and Tom take the lead to a documentary for an English television channel, and we are going up a small propeller dash8 for Ilulissat, world capital of icebergs and glaciers, the starting point of the first polar expeditions by Paul Emile Victor.”

“Here, it feels like another planet, an alien universe where the ice reigns as master … In the middle of the icebergs of Ilulissat, real moving ice mountains, time is suspended. The heart stops beating for a moment. What spectacular landscapes.” 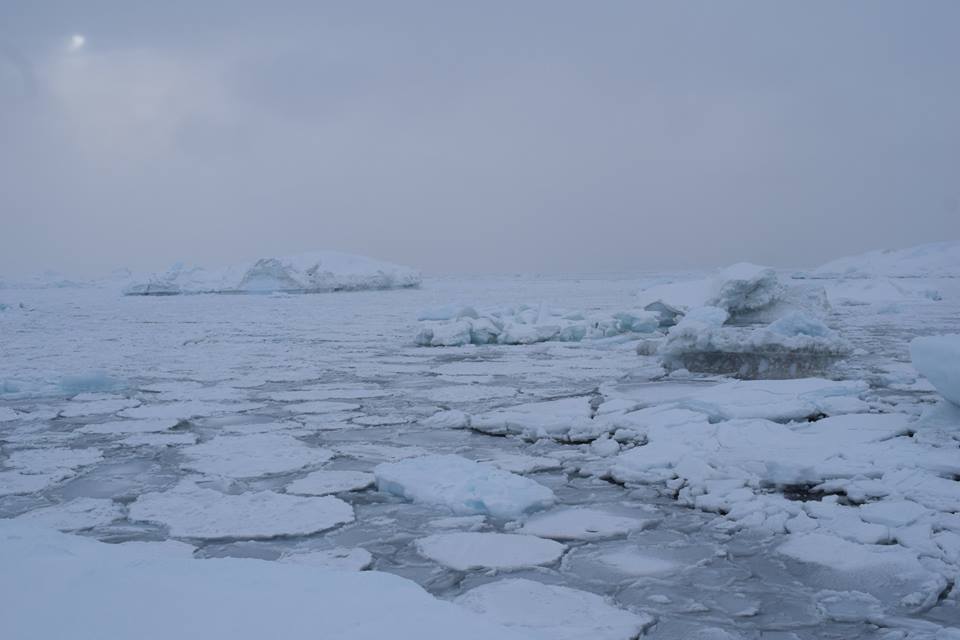 “First night under the tent! It’s -36 degrees inside, I let you imagine the outside temperature with a good little wind … It pierces. It’s really freezing … Planting the tent in the wind and cold is already a mission. Doing so is easy with mittens to be very agile, and the ground is frozen (permafrost).

“At night, the interior of the tent and sleeping bags is covered with a layer of white. The warmth of the body and breathing is it. Moisture that simply freezes. With the wind and our movements, the walls of the tent are moving and so it ‘snows’ in our home.”

After the first night, Ingrid decides to move forward. The new goal is to reach Oqaatsut (also known as Kalaallisut for “Cormorants”), a coastal settlement of about 40 inhabitants.

“We go up, we go down, it’s so hard. We have more than 80 KG of materials to transport. A day outfit, a night outfit, and a spare outfit for three weeks, and the bivouac and survival gear,” writes Ingrid in her online journal. “We can not take anything out of it!”

The expedition is getting more and more difficult as Ingrid travels on.

“We have a frozen lake, and we meet the team of expedition Sea-Ice Greenland. Their expedition is complicated day by day. I can count more, but it’s essentially bad weather, bad frost, logistic problems, and material.”

However, she remains positive.

“This is about the adventure! We do not master everything, and we have to adapt.”

That determination and focus help Ingrid make it to the destination of the ice floe.

Ingrid writes: “Woohoo! First steps on the ice floe! Well, I admitted, I was not very comfortable at the beginning. You have to be vigilant. Falling in this water with these temperatures could not be used in danger. “

“We find the little blue cabin. The temperatures are always icy (-20 in the cabin before the ignition of the oil lamp), Julien Caquineau welcomes us in his house around a good coffee and a dried piece of narwhal and the fat cut into small cube. What we will eat to regain strength and warm us up!”

Unfortunately, however, Ingrid won’t be able to reach the Equii Glacier.

“We were at Plan B,” says Ingrid. “But Plan B won’t be. We won’t be able to reach Eqiii because we have to cross several fjords, and they are currently uncertain in ice.

“Winter has not been rigorous enough, the ice is not good. Storms and common currents regularly bring back the black and deep water. Here only time and ice are masters.”

“I want to reach the cape, and so we persevere. You have to cut through the mountain, cross a few lakes and come down to the ice-floe … Julien announces that it’s not going to be simple: it goes up a lot and lots of ice to cross (waterfalls).”

After another false start, Ingrid decides.

“We will have to wait for Plan C. It’s a snowstorm! and it’s completely stuffy …”

“And now life at the cabin: It is so far away from the village that I can’t believe is in this world. In a restricted space, small, low, everything finds its place: Pulk, bag, food, sleeping … refuge of calm and rest.

“The window framed the most beautiful landscape of the bay. When I raise my eyes, the sea, its ice, and its icebergs … I am the first to see the fight of the water and the cold. Offshore, large icebergs look like cathedrals, driven by the currents of the arctic sea, and drift on the horizon.”

After being snowed in for two days in Greenland, Ingrid experiences good weather, and it’s time to keep going.

Her pulk keeps sinking into the snow.

“After a night under the tent, we go back to the path. Wearing our skis covered with skins, we draw the pulk.

“For hours, we have been walking, walking, behind a frozen lake and mountains. We’re moving our way east to meet the cape, but it’s starting to rise and we’ll be in deep snow. The beginning of the struggling … Our road is getting more and more chaotic.”

“The pulk blocks against the rocks, slide in the cant, uncontrollable on the ice … The progress is laborious: 5 hours to shoot the pulka for 1,500 meters. A killing.”

Ingrid’s journey feels more like sleepwalking She’s walking and then stopping and then walking again and stopping.

“I’m doing this for hours,” Ingrid writes. “An eternity. 28 small steps in the snow. Hoist the pulk, plant the axis so you do not let it go. Waiting for JB to go back 15 meters and anchor himself in the snow. Then another 28 small steps to find him and start again … again and again …”

“We’re getting lost. You’re going to go down in a lake, then go back up, we’re getting exhausted … Early morning reflection: a pulk is not made for the mountains.”

“We go through the lake, but we find ourselves once again in front of a wall … We are not sure of our way and on the other side, the descent may be difficult (rocks, ice, inclination, etc.). It deserves some thought.”

“Photos don’t really reflect reality,” ponders Ingrid. When things are actually very difficult physically or the weather is especially bad, she doesn’t take pictures. Doing so is too complicated.

“This course is feasible but without pulk of 80 kg … or then with dogs of sleds. This crossing has never been done in this sense, and we understood why. It goes up, and it goes up, exhausting, especially with so much snow.

“We’re not superhuman, we’re here to treat ourselves, so we make a U-turn. But we don’t give up, there will be a Plan D. Never give up!”

Every day, every morning, every night, make water essential to hydrate and to eat the freeze-dried… with a piece of iceberg, snow, ice from a frozen lake.

Now, Ingrid decides to travel in the direction of the fjord of Sikuiuitsoq, passing by the lakes of Navdluarsupp Tsia.

“The ice sheet covers this fjord, trapping the icebergs carried by the polar cap. It is also a very popular hunting and fishing area for Greenlanders who go there.”

She still has the same goal: Reach the ice sheet (ice cap), the largest ice surface in the Northern Hemisphere, one of the most mysterious and inhospitable places on the planet.

“Departure from Ilulissat. We are getting ready with the pulk between the granite hills cut by time and ice sheets.”

“We’re taking the trail of sled dogs. We will have all the time in a few hours: Sun, rain, snow, fog …

“The strong wind is predicted. We are walking in a cabin that is located on a frozen lake. The cabin is in a sad state. There are only the four walls and the classic grime. There’s no more door, and it smells like seal fat. Reserved for hunters and fishermen in this valley, it is for us at a time our home sweet home. There is a corner to sleep, a roof to dream under, and the heartbreaking cry of the wind between the boards.”

“In the early morning, the weather is proper, the cold bearable … We leave the little red cabin. In six hours, we should reach the ice floe and see the cooler front of the glacier…

“After 15 days of incessant struggles, I believed that the ice was going to calm down a little. Allowing me to reach (finally) my goal (after all these plans). But the wind has risen. Quietly. Slyly. Timidly. Then violently.

“This dense, hard, icy snow strikes the face. I do not see anything, nothing at all. JB and I cling to the waist with a rope, the only link that brings us together and allows us to stay together. It’s the storm, the blizzard. This storm is like one in the movies.”

The struggle isn’t just before them … but it is also the unseen landscape before them. Ingrid wonders about what’s coming.

“In front of me, I do not see anything, black, a hole. Between these two walls, we had to start the descent to the pack ice. But how is it on the other side? What is the inclination of the slope? Is the weather worse at the bottom?

“The wind is spilling me into the gusts. It’s more than 60 knots, worse in the gusts. I barely stand up. Shaken, clamped on my skis, I can barely maintain myself.

“It is for about 4 hours that we walk, it remains only a few kilometers to the ice.”

Should Ingrid continue to go for her ultimate goal and bask in the joy of getting the job done? Or should she turn around and be proud of what she’s accomplished so far?

Stay tuned next Tuesday for the final installment of Ingrid’s Greenlandic adventure.