There are a lot of Instagram influencers out there—and not all of them are mega-influencers charging tens of thousands of dollars per post. Even teens with a modest following are making money promoting products and services via social media.

Posting to Instagram takes a focus on analytics, strategy planning, time management, and the help of third-party tools. In addition, relationships between brands and influencers evolve as policies change.

Now, it seems that followers expect the Instagram influencers they follow to talk about products only when they’re paid to do so, to the point that when the influencer is seen with a product she is not paid to promote, she has to clarify the nature of the relationship (or lack thereof). 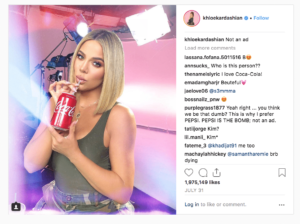 In the post above, Khloe Kardashian had to clarify that her picture was not an ad for Coca-Cola. 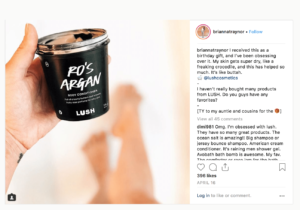 Brianna Traynor had to clarify that the product she photographed was a birthday gift from a family member.

The FTC wants influencers to be clearer than ever before about every product or service they promote.

Some social media platforms agree that increasing the transparency of paid relationships is important, so they are finding ways to clarify those relationships within the platform itself. Instagram is one of those platforms.

In 2017, Instagram launched a tool that would provide an extra level of transparency to sponsored posts using a line under the username (and just above the image) that says “Paid partnership with” followed by the Instagram username of the sponsoring brand. 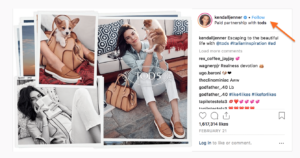 You’ve probably seen a mega-influencer like Kendall Jenner post using this feature (for example, boasting a paid partnership with tods). This feature links the sponsoring brand’s username at the top of the post under the influencer’s username.

What do brands need to know about working with influencers? What should influencers integrate into their sponsored posts to make sure that they are running their influencer business ethically?

Here’s what they can do to avoid getting on Instagram’s (and the FTC’s) bad side.

It’s Not (Just) About Money

In addition to gifts and money, affiliate links and codes can provide a benefit to the influencer. Where a relationship of mutual profit exists, the relationship should be disclosed.

In the case of affiliate links, some brands give influencers a payment per clickthrough, and others give a percentage of sales that actually convert from the link. In the case of a code, a retailer can see how many times a specific discount code was used and share payment with the influencer based on those sales. 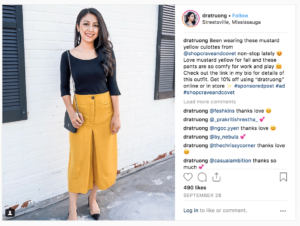 It’s Not (Just) About Promoting Products

Rowan Row, a blogger who travels the world, has over half a million Instagram followers as of this writing and posts mostly photos of himself in the different countries he visits. He has several brand partnerships, and uses the new Instagram feature for sponsored posts to be transparent about those relationships. 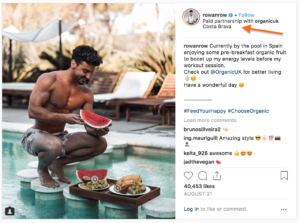 For example, in one post, he enjoys some organic fruit at a pool and asks people to look at Organic UK for more information on living a healthy lifestyle. In this post, there is no product to sell (the fruit in the photo is not sold by Organic UK, which is a campaign financed by the EU).

Instead, Rowan is promoting the Instagram profile of the campaign. Still, he gets paid to do so, and so he discloses the relationship.

If a brand pays an influencer to ask their audience to follow the brand on Instagram, it is still a paid relationship. The influencer might not be asking their audience to buy a specific product, but they are still promoting the brand and getting paid to do so. This is a post that still requires transparency and using the new Instagram feature fulfills that requirement.

Some influencers started adding in hashtags such as #sponsored, #sponsoredpost, and #ad to keep themselves out of trouble with the FTC, but sometimes hashtags aren’t considered a transparent enough declaration of a relationship.

In an Adweek article, Lauren Johnson asks Mary Orton, a fashion influencer, about these hashtags, to which Mary replies, “If their goal is to inform the consumer and make sure that there is that transparency to the consumer using words like ‘ad’ and ‘sponsored,’—which are rooted in traditional media—I don’t think that paints a clear picture to the consumers.” 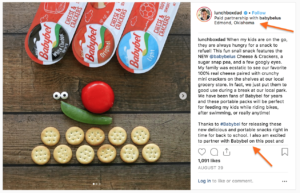 Lunchboxdad shares information about a new product by Babybel. At the end of the text of the post, he writes, “I also am excited to partner with Babybel on this post and to be part of their brand new #snacksquad!” What does “partner with” mean? Is he getting free cheese to post, or is the company paying him per post? 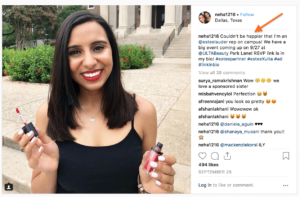 This Estée Lauder college rep knows how to be clear with her followers. She explains that she’s the campus rep for the brand before she talks about an upcoming brand event. 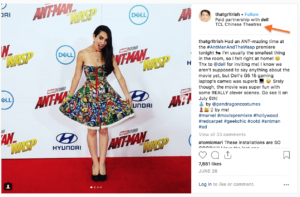 Trisha Hershberger, an actress, is shown in different poses on pieces of the set at the Ant-Man and the Wasp premiere.

Later in the post, she thanks Dell for inviting her to the premiere and notes that Dell’s G5 15 gaming laptop has a cameo in the film. In this post, she doesn’t put the product front and center, but works it into the post in a way that may seem more natural. She also includes the hashtag #ad below the main text. While she does include the hashtag, it isn’t all that’s included. She uses the Instagram feature that shows at the top of the post to indicate her paid relationship with Dell. 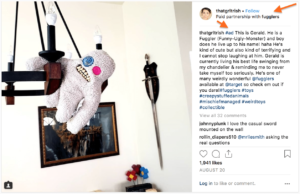 In a different post, Trisha puts the product front and center, hanging a Fugglers doll from a chandelier. While she begins the text with the #ad hashtag, she also uses the Instagram feature for sponsored posts, by indicating that she has a “Paid partnership with fugglers.”

Some people still aren’t completely transparent about their brand relationships. And with others, it seems like there might be a paid relationship, but it’s just not clear. 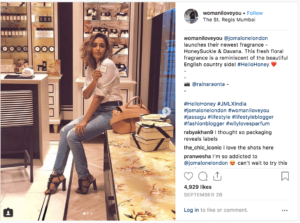 For example, is this post by Jas Sagu an unsponsored post, or is she promoting a jomalonelondon fragrance for something in return? (As of writing, there is no indication that it is a sponsored post.)

Even if things seem unclear with other influencers, don’t let this justify bad behavior on your part, whether you are a sponsoring brand or an influencer. You might lose the trust of your customers and followers or get an unhappy message from the FTC. It just isn’t worth it.

If you are a brand, how do you communicate with the influencers you work with to make sure they are using the Instagram feature and showing transparency about your relationship?

Do you provide influencers with a checklist to make sure they are using the Instagram feature for sponsored posts and including relevant hashtags?

If you are an influencer, how do you manage a conversation with a brand that initially wants you to hide your relationship? How do you work with brands to disclose your paid relationship responsibly so that you don’t get in hot water with the FTC or lose the trust of your followers?

How to Find the Right Instagram Influencers for Your Brand