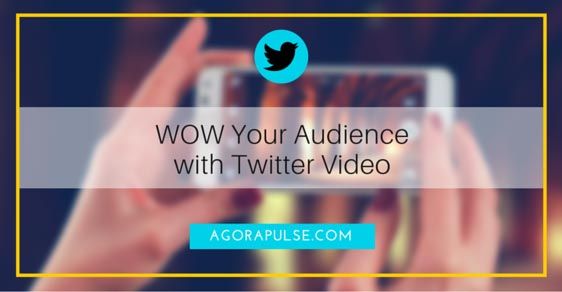 Twitter video is one of the best ways to leverage the power of the site to your advantage and engage with your audience in a whole new way. By understanding a little bit more about how Twitter video works and how it can benefit a business, you can begin to see how you should start using it moving forward. So let’s learn!

The way video works on Twitter is incredibly straightforward. Built right into the Twitter app is the option to capture video and attach it to a tweet — similar to the way you might attach a photograph that you’ve taken.

Depending on your preferences, you can choose to either attach a newly recorded video (from an iPhone camera, for example) or add a video that you’ve already shot at some point in the past. You can also share Vine videos on your channel to draw in exposure from another social channel.

One of the keys to this equation is that you only have 30 seconds to work with regarding the videos that you’re adding. While this may initially seem restrictive, it has a few important benefits.

For starters, a 30-second time limit is very much in line with the general appeal of Twitter in the first place – brevity. When you consider that the service is sticking hard to its 140 character limit for tweets, a 30-second limit makes perfect sense. It’s what the site’s users (and ultimately your customers on this channel) want.

Secondly, a number of studies have been down that show that you lose an average of 33% of your audience after the first 30 seconds of a video have passed, so this limit helps you retain as many sets of eyes as possible for maximum effectiveness.

Once captured (or attached), the video then goes out with the tweet and anyone with a Twitter account can view it. It really is that simple.

According to the Cisco 2015 Mobile Forecast, mobile video was responsible for over 50% of all mobile data traffic at the end of 2014. This is a number that is only expected to increase as time goes on. Because of that, the primary benefit of Twitter video for your business becomes immediately clear: It lets you take your marketing message to your users in the form that they want.

Studies have been done that show that 65% of users prefer to learn in a visual way. If you put the same message in text and in video, the video format will always do better for that very reason. Because of this, a video call-to-action will always be more effective than its text-based equivalent. Simply by adjusting your existing techniques into the video landscape, you’ll both be increasing the effectiveness of your campaigns and leveraging the power of modern technology to your advantage.

One of the most common ways that many brands are using Twitter video today has to do with providing live coverage of events to customers as they’re happening. Say you’re having a fantastic event in your store with a guest speaker and a “question and answer” session. You’ve probably sent a number of tweets out in recent weeks hyping the event to try to get as many attendees as possible. Thanks to Twitter video, the effectiveness of that event is no longer limited to just the people who were able to physically make it into your business. In just a few seconds, you can share interesting and captivating clips with your entire audience – allowing the people at home to get in on the fun, too. This essentially breaks down the barriers of geography that typically limited these types of events and lets the whole world participate should they so choose. Another terrific way to garner attention and use Twitter video creatively is to accept user created content for your feed. GoPro is perhaps the best example of this concept at work today, as its Twitter feed regularly accepts and posts video of the amazing feats its customers are performing while wearing a GoPro video camera.

Not only is this a great way to show prospective customers what real people are doing with their equipment, but it also lets existing customers engage with the brand in a whole new way. GoPro gets free content and users get the thrill of seeing their video immortalized on the Internet in front of an audience of millions. Everybody wins.

Let’s face it: video captures and captivates an audience attention. As the social media arena grows and evolves we will continue to see new and innovative ways to fascinate our audience. Twitter has a large audience and its video usage will only grow as the channel continues to be a top player in the social media ring.

Do you use video on Twitter? We would love to see your latest (SFW) video tweet in the comments below!