Get the latest news, see what’s trending and effortlessly find what you are looking for. That’s the dream, right? And, incidentally, it is what Twitter wants to achieve with its new Explore tab which replaced Moments.

Explore takes search, Moments, live video and trending hashtags and houses them under the same roof. Your days of switching over from tab to tab are done.

The whispers first started in the fall of 2016, when Twitter began testing the feature in select markets. The project was confirmed to Mashable in early October 2016 and in January 2017, it began rolling out to the general public.

Their growth over the last few years has been anything but stellar. Let’s compare it to some of its competitors.

Even the release of Moments, the feature that was meant to save all and bring new users to the platform, didn’t have a significant impact. If anything, growth has been slowing down over the last three years.

Something had to change. Twitter hopes that Explore is the piece it’s been missing.

Right now, Explore is available for iOS and will become available for Android devices in the coming weeks. There hasn’t been any announcement about when or if the feature will roll out for browsers.

But what does Explore do and how can it help your business? Let’s take a look at the three main features: trending content, moments and explore all. 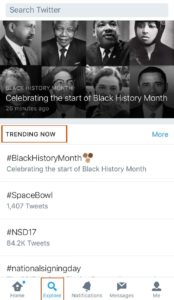 Trending content isn’t a new feature. It’s where you find the most popular and tweeted about content at the moment with hashtags rising and falling throughout the day with the ebb and flow of conversation.

It’s where you go to see what’s on the Twitterverse’s collective mind.

Trending topics remain a great way for creative social media managers and digital marketers to tap into key events and connect with our audience.

They provide the perfect opportunity to share related content, get in front of a large new audience, and showcase your brand’s values.

Just remember to stay away from bad newsjacking. Compromising your brand’s image is rarely worth it. 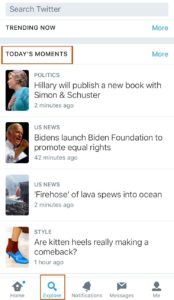 Moments is still here. Even though it’s been swallowed under a parent tab, you can still use it to effectively grow and promote your brand.

The way to create new custom moments from the mobile app hasn’t changed — just go into Settings and select Moments.

This remains a great way to repurpose old tweets and create a narrative and you can use it effectively in a lot of different scenarios.

Create a moment around a new product launch by pulling together teaser tweets from the last few months. Or, show off what’s going on behind the scenes by collating relevant tweets and presenting them in a neat package.

Look through what your competitors and brands that share your audience are doing and use it a source of inspiration.

The Explore All feature is pretty self explanatory.

This is actually a pretty neat feature aimed at making it easy to find moments around specific topics. So, unlike scrolling through the top ones you can dig into what you find interesting.

The news tab plays to Twitter’s major appeal as a news source to a large percentage of its user base.

Pew Research Center found that 62% of US adults get news on social media and 59% of Twitter’s users use the network as a major news source, outranked only by Facebook.

So Twitter is trying to make it easier for new users to find what they are looking for without having to mess around with various different parts of the platform.

This seems to be a key strategy for bolstering their monthly user base.

That remains to be seen. The feature is still in its infancy but it does have a lot of promise.

It has streamlined Twitter’s search process, bundled moments under general headings and made it easier to find trending content by housing it in one place.

Will this bring new users to the platform? Hm.

But the Explore feature can existing users (like you, presumably) find relevant trending topics faster and streamline your Twitter research process so you can market relevant content to your followers and to new audiences even more effectively.