1. Scheduling the same tweet over and over again2. Scheduling Tweets to Multiple Accounts3. Using "Custom Audiences" is in Violation of Facebook's Rules4. Placing Pixels on Sites Other Than Your Own5. Using Dummy Profiles to Admin Facebook PagesDo I Really Need to Follow These New Rules?Final Thoughts

1. Scheduling the same tweet over and over again2. Scheduling Tweets to Multiple Accounts3. Using "Custom Audiences" is in Violation of Facebook's Rules4. Placing Pixels on Sites Other Than Your Own5. Using Dummy Profiles to Admin Facebook PagesDo I Really Need to Follow These New Rules?Final Thoughts

Are you accidentally breaking these new social media rules? Here’s a quick look at what they are and what you can do to avoid making these mistakes.

A lot of big social media changes have been happening lately across a number of different platforms. The past few months have been extra busy for marketers, to say the least, while we scramble to make sure we understand the new rules and adjust accordingly.

Unsurprisingly, new social media rules have accompanied these changes. With everything happening, a few of them have been easy to miss or forget. That doesn’t mean they’re not important, though.

After the data breaches, every social platform is cracking down hard on users and brands who break the rules they’ve laid out—even if they’re new.

In this post, we’ll take a look at 5 new social media rules you may be breaking

This is the first of Twitter’s new anti-spam rules, which we covered in-depth here.

In an attempt to improve the quality of posts on the platform and reduce the clutter, Twitter now forbids brands from reposting the same tweet multiple times on the same channel. 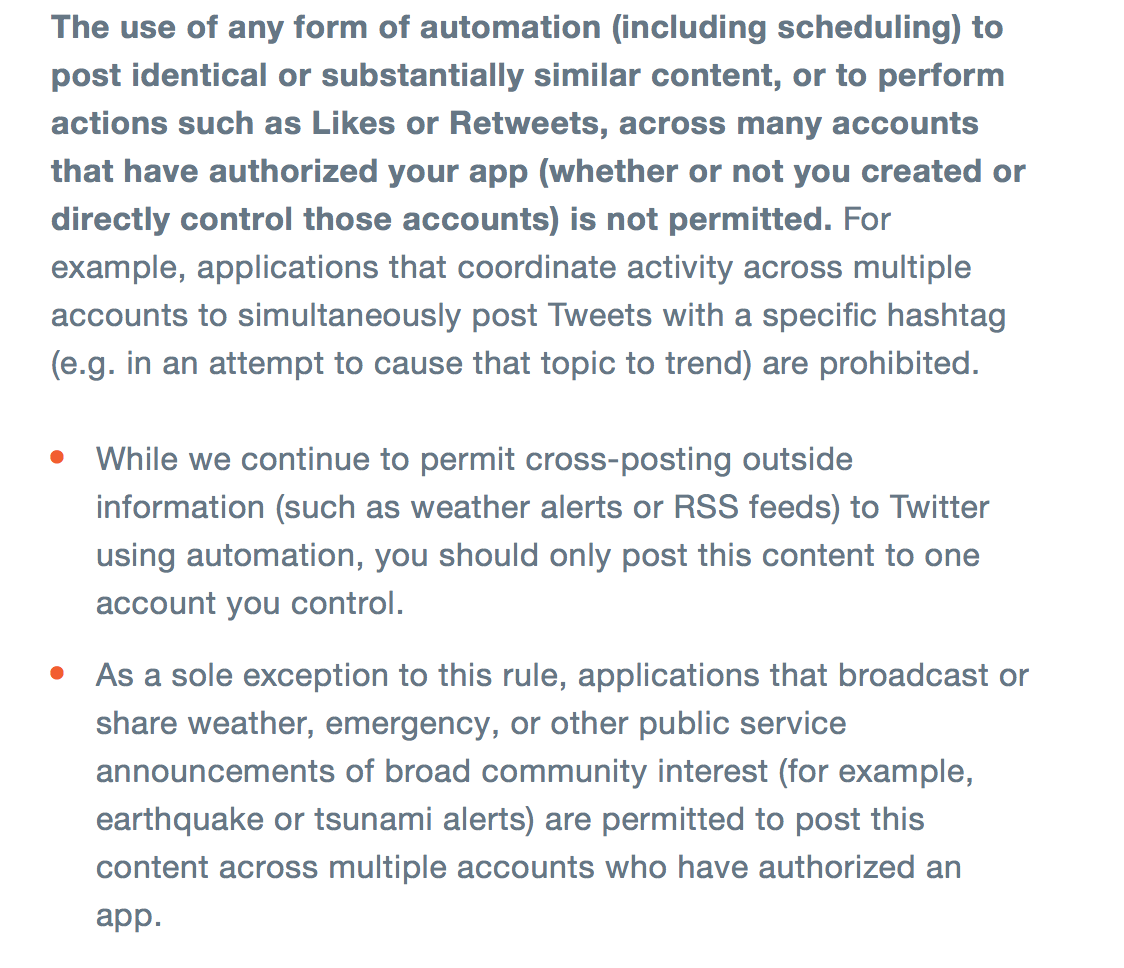 Many brands have historically used the recycled content strategy to get the most out of their evergreen content. They share timeless tweets linking to blog posts, quotes, or fun facts about the business several times over a span of weeks, months, or even years.

Now, though, this strategy is out.

Instead of scheduling duplicate tweets, take a few more minutes to schedule multiple similar (yet unique) tweets on a single topic at once.

Even if you’re sharing the same blog post once a month for six months on Twitter, just write six different tweets and schedule them at the same time.

Doing this will save you time but still give you that automated marketing process.

This is the second half of Twitter’s anti-spam rules. It dictates that a single marketer can’t schedule duplicate tweets to multiple different accounts. 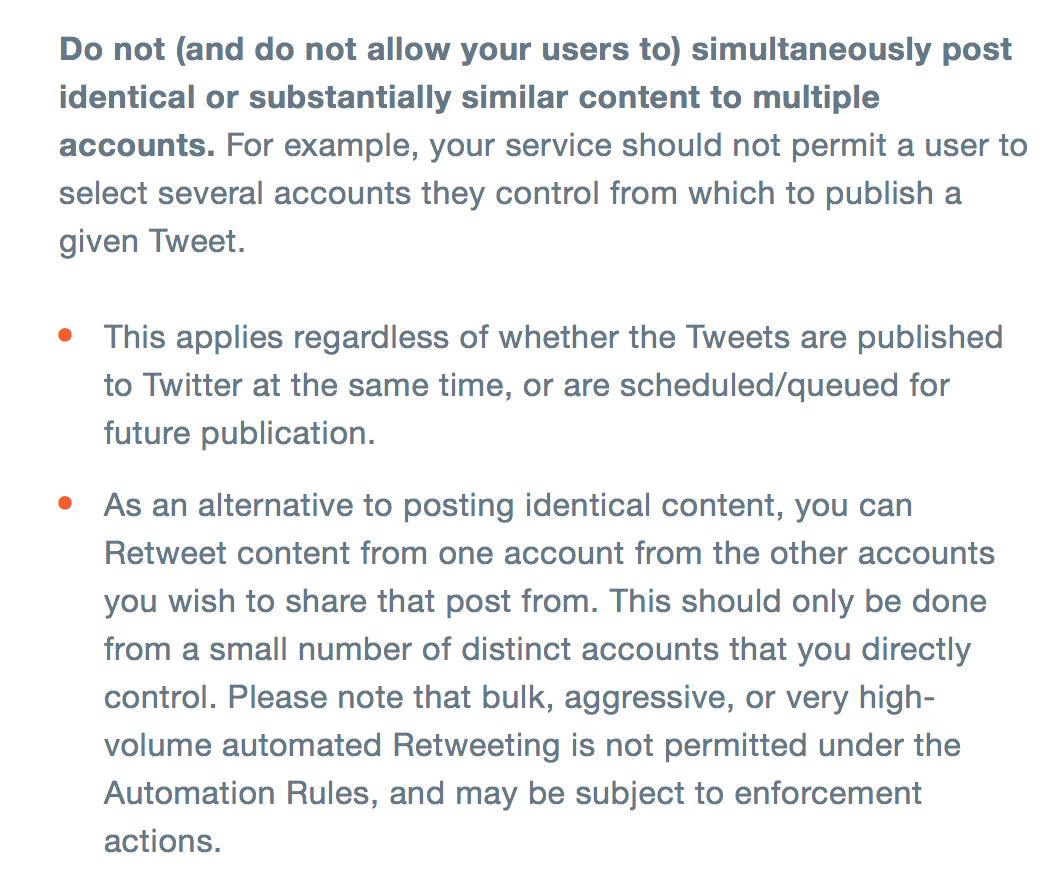 For example, I manage multiple social media profiles for different B2B  businesses. While they’re all in different areas to avoid conflict of interest, general business quotes do well on each.

Previously, I could have scheduled the same quote to go up on these different profiles all at once.

Now, that’s out of the question.

Create custom content for each individual channel. Not only will this keep you from breaking Twitter’s rules, it will ensure that the Tweets you post are directly relevant and optimized for each brand.

Quality over quantity and all that.

3. Using “Custom Audiences” is in Violation of Facebook’s Rules

Facebook has always had rules about their “custom audiences” and how you can create them, specifically when it comes to user data. It’s pretty much always been the case that you were supposed to only create lists to target users who had opted-in to your list.

Unsurprisingly, however, there have been a lot of pretty sketchy practices. A few brands and advertisers ignored this rule entirely.

But some brands and businesses don’t even realize they’re breaking the rules, even though this one has been around in some form for awhile.

Where most people get in trouble is either through bought lists or non-opted in data.

Maybe users buy from you but don’t agree to have their email addresses added to your list, and you target them anyway.

Both of these examples can land you in hot water, especially with users worried about privacy and Facebook aggressively cracking down on this.

Only create custom audiences from an email list with lists that are valid and follow Facebook’s strict rules.

Make sure that the users on your list have all opted in to be on said list, and that you’ve obtained their information with their explicit consent. Read the full Custom Audiences terms of service to make sure that you’re in the clear.

Moving forward, make sure to adopt these practices.

If you need to build a list quickly, you can use Lead Gen Ads on Facebook to do so.

4. Placing Pixels on Sites Other Than Your Own

This is a grey area that a lot of brands may have dabbled in. They knew it wasn’t how Facebook wanted the pixels to be used but also knowing that it didn’t technically break the rules.

Facebook now has a rule that expressly forbids this. You can only place the Facebook tracking pixel on the sites it is meant to live on.

Let’s look at an example of how this works.

Say I have full access to my site, and to Agorapulse’s site. (I don’t.) I install my brand’s tracking pixel on Agorapulse’s site, so I can retarget users who have visited Agorapulse’s blog and hit them with copy advertising social media consulting packages.

That would definitely be effective, but a huge breach of trust on so many different levels and definitely not OK.

Keep your pixels to yourself, people. It’s that simple.

This last rule is the one that I think is the most innocent and the easiest one to miss and break by accident. It’s also one I’ve had to talk to several clients about already.

A lot of people use dummy profiles to admin Facebook Pages. This does not automatically mean those Pages are spam, and there’s plenty of reasons why people do this.

Now, though, that’s not going to fly. At least, not for larger pages. Facebook is implementing a rule that will require the admins of Pages will large followings to verify their profiles.

This means that the admins need to have real, working profiles (not dummy accounts) to stay compliant.

There’s a lot of missing information about this one right now.

We don’t know what counts as a “large following” yet and we don’t know what will happen if the rule is broken. It puts you at a direct risk for possibly having your Page suspended, shadowbanned, or who knows what else.

Go ahead and address this now.

If you have a Facebook Page, you should have a real account. Take some time to add some friends on Facebook, and post every so often. Be active on the site, even if it’s just 30 minutes a week and your privacy settings are extremely restrictive.

You should also invest in social management software like Agorapulse, where you can grant access to multiple team members easily and securely. You can still be in full control, but there’s no longer a need for dummy accounts to streamline things.

Do I Really Need to Follow These New Rules?

I’ve always been a rule follower. I even come to a complete stop at every single stop sign and never go more than 5 miles over the speed limit.

And I strongly believe that Twitter and Facebook put these rules in place for a good reason. You’ll never hear me say, “Yeah, go ahead and blow that one off, it doesn’t matter” because I don’t believe it’s ever a good strategy.

But for these rules, you really need to follow them. Facebook and Twitter are taking these new updates very seriously; they’re ready to crack down hard on any rule breakers.

Facebook is even offering an actual cash bounty for reports of data abuse, so you really don’t want to get caught on the wrong side of this one.

Even if you found some weird loophole to sidestep these rules, don’t do it. They’re put in place to make users’ experiences on the platform the best they possibly can be.

If you’re determined to not comply, it means that what you’re putting out may not be good enough to stand on its own. And ultimately, that’s a much bigger obstacle than any new hoops Facebook and Twitter have for us to jump through.

While we’re used to social media changing quickly, we’re not used to dealing with this many rule changes all at once.

Each rule can directly affect us to varying degrees, forcing us to adapt our strategies. That being said, these rules are all good rules. They’ll force us to do better if we aren’t already using the platforms the intended way. Long-term, that will mean better results across the board.

Are You Wielding Your Social Media and Blog Like These Fortune 500 Companies?