You know you need to do video as part of your Facebook marketing. But should it be live video, pre-recorded video, or a bit of both?

Live seems like the quick solution—but there’s so much more you can do with prerecorded video. Which should you choose?

As someone who does both, I have some pros and cons for each.

The big downer with prerecorded video is that it’s time-consuming. If you want to stand out with it, you need to learn new skills like visual storytelling and editing.

Is it worth it?

You can never guarantee the quality of your live broadcasts. You can buy the best camera, the best mic, and use the best software … but it can all fall apart with a poor Internet signal, a power cut, or a Facebook glitch.

If something doesn’t work properly, if you forget to connect a mic, if you fumble your lines, it doesn’t matter. You can shoot it again (and again) until you get it right.

It’s not all about the best camera and mic or the best lights. What makes pre-recorded video shine is visual storytelling.

Most live videos consist of one shot of the presenter talking to the screen. Sometimes, you’ll have an interview set up with a split-screen. To keep it visually interesting, you have to change “scenes” regularly and introduce prerecorded elements.

I use stings in my live broadcasts to keep them interesting. 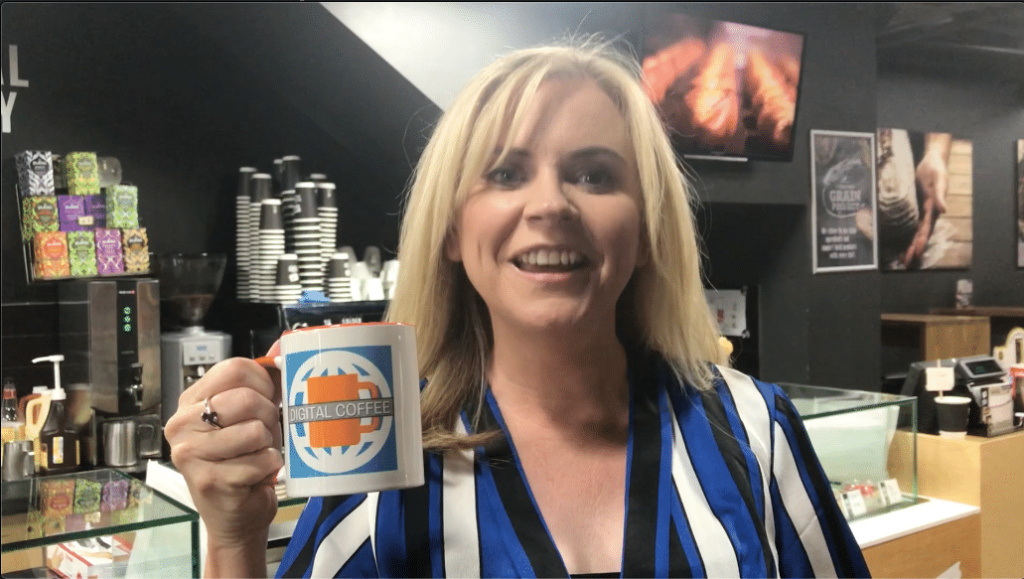 Use short pre-recorded videos as stings in longer live videos to break up the segments.

Without a professional multi-camera tv studio style set up, you are limited to these tools. But visual storytelling can do so much more. By using a mixture of shots and angles, you can enhance your story.

The next time you are watching a series on Netflix or a movie, pay attention to the camera shots.

Even something as simple as cutting into a closeup of the product you are selling or the website you are talking about can add impact.

Although technically you could do this with live video, it would be a big production involving several crew members. With prerecorded video, you can do almost everything by yourself with a tripod.

Doing it over and over

I studied television production in college and worked in the film industry for 8 years, yet it took me 26 takes to shoot my first online video.

It still takes me at least 5 takes when I’m prerecording. And that’s the beauty of pre-recorded video. Even if you don’t fluff your lines, the 5th take is almost always better than the first one.

Editing is a storytelling tool, too. When you get skilled at editing, you’ll be able to add shots and cutaways to show people more and reinforce your message.

This all sounds good, right? So why wouldn’t you just use pre-recorded video?

All that doing over and editing takes time. It can unleash your inner perfectionist and what seemed like a simple video could take hours to get 100% right.

And then you have to edit it.

If you create pre-recorded video frequently, you’ll develop your shooting and editing skills and you’ll get faster at it. But even an accomplished editor needs time to get it right.

You have two options. You can upskill yourself or your team which takes time, or you can outsource these tasks which takes money.

If you have a limited budget and limited time for your video productions, you may want to focus on Live broadcasts instead.

Anything can go wrong with Live broadcasts. There’s no do-over, whatever goes live stays live. So why would a business take the risk?

Pre-recorded video is a one-way conversation. It’s passive. You make the video, your viewers watch. If they like it they may react, comment or share, but there’s no real-time conversation.

Live video is interactive. You broadcast, your viewers watch and comment and you can talk right back. The people who watch and engage with your broadcasts help shape what happens. It’s perfect interactive content.

This week on the Digital Coffee ☕️Question: Are you shopping online more than you used to??You could soon be sending marketing emails via Facebook?Pinterest turns search into shopping?YouTube search could soon feature web page results

But what’s the advantage of that?

Because your viewers took part in the broadcast, they will feel more connected to you and your business. They’ll feel like they know you, and they’ll trust you more making them more likely to become customers.

And it’s not just because you can talk to them directly through a camera. According to David Meerman Scott, if you let the camera get close, they feel like they know you.

“If it’s a live video, you could be thousands of miles away, but those people’s brains believe they’re in the same room with you. That’s exactly why you feel you know a movie star. You’ve never met them. But because you’ve seen them on the screen, typically within close physical proximity, you feel as though you know that movie star.”

Getting to know your customers

Live makes your audience feel like they know you, but it can also help you make connections and find out more about your ideal customers.

The better we understand and know our customers, the better our marketing becomes.

You’ll get to know your regular live viewers through the comments they leave on your broadcasts, but you can also take this one step further and do some digital sleuthing to find out more about them.

And when you do, don’t wait for them to comment on your broadcast, open the conversation yourself.

For example, I have a regular live viewer from Australia. I’ll often ask him conversational questions during the broadcast like “What time is it there in Australia?” and “What’s the weather like there?” They’re not deep questions, but they are conversation starters that (hopefully) make my viewers feel noticed and valued.

If you don’t want to call them out publicly like this, you can use the information you find during your sleuthing to inform your content and make sure you are talking about the topics your audience cares about. 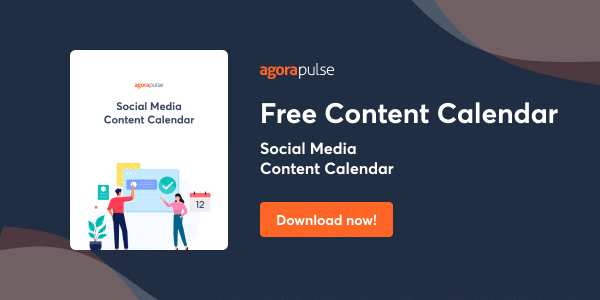 Making a date with your audience

Every Wednesday at 8 PM, you’ll find me sitting in front of my TV with a cup of tea in hand ready to watch my favorite TV show “The Repair Shop.”

The Netflix effect means this doesn’t happen as often as it used to, but I’m loyal to my favorite TV show. I’m there week after week, even if I have to work late I make time for “The Repair Shop.”

When you broadcast your live videos at the same time each week, you will attract an audience of loyal viewers like me.

They’ll remember when to show up, just like I remember to show up for The Repair Shop.

Not only does this build a loyal audience who are easier to convert into customers, but if they are commenting and engaging the Facebook algorithm will love it.

Join our Content Scientist, Scott Ayres, along with special guest Brad Friedman to find out if we wasted over $2500 boosting our Facebook Live Video replays! We'll discuss our findings, along with Brad's experience on boosting Facebook lives. And we'll give you pointers on promoting your Facebook Live after it has aired!!Remember to comment "LAB" to join our private Social Media Lab group and to never miss an episode of the Social Media Lab LIVE!

Getting more people to see your posts on Facebook is a constant struggle. Both prerecorded videos and live videos can help expand the reach of your page.

But live wins out, according to a Social Media Lab experiment.

That could be because of the engagement.

Facebook considers conversations on Live broadcasts “meaningful interactions.” According to an article published on the Facebook blog in 2018: “Live videos on average get six times as many interactions as regular videos.”

An experiment from the Social Media Lab also showed that live video still gets more engagement.

Engagement helps you build reach, but it also helps you get to know your customers.

All you have to do is pick up your phone and hit the “Live” button—and you’re making a live video. You don’t need fancy equipment, and you don’t have to spend hours editing.

Even if you are creating a complicated broadcast with running orders and multiple segments the time planning, rehearsing and shooting are still minimal compared to creating a pre-recorded version.

But don’t cut back on the planning time. A good live show is well-planned.

As you’ve no variety in shots, you need to decide what you want to say, map out segments, and look at how you can add pre-recorded segments.

And if you want to minimize mistakes, you need to rehearse, too.

It’s less time than it takes for pre-recorded video, but it is still time you must find in your schedule.

My live show takes 3-4 hours to prep, including research, set up, and rehearsal. It would be impossible to create a polished 30-minute pre-recorded video at that time.

The one-take and it’s done approach is a real plus. No editing. No do-overs. But you’re also losing some control.

Things can go wrong … and you have to be ready to deal with them.

Losing control like this is a pain, but it can also be a plus. Ask any live streaming veteran and you’ll discover that viewers enjoy seeing the mistakes too, it makes you more human to mess up.

You can set up ads for pre-recorded videos before they are published to your page. This gives you time to get ads approved before you launch the video.

You can’t do this with live broadcasts even if you schedule them. Facebook needs to see the content of the video before it approves your ad. This can mean that ads promoting your video won’t go live for hours or even a day after your broadcast.

I use Premier videos when it’s impossible for me to go live. They work in a similar way to Live broadcasts, and I’ve seen some of my premiers get more views than my full live broadcasts.

Premier videos are prerecorded videos that you schedule to go out at a specific time. When you schedule a premier, viewers can sign up for a notification just like on a live.

When the video is published viewers interact with each other just like they do on your live broadcasts, you can even join in on the comments.

When I use a premier instead of a live, I record the broadcast in one take as if it’s live, this gives consistency to my regular viewers. 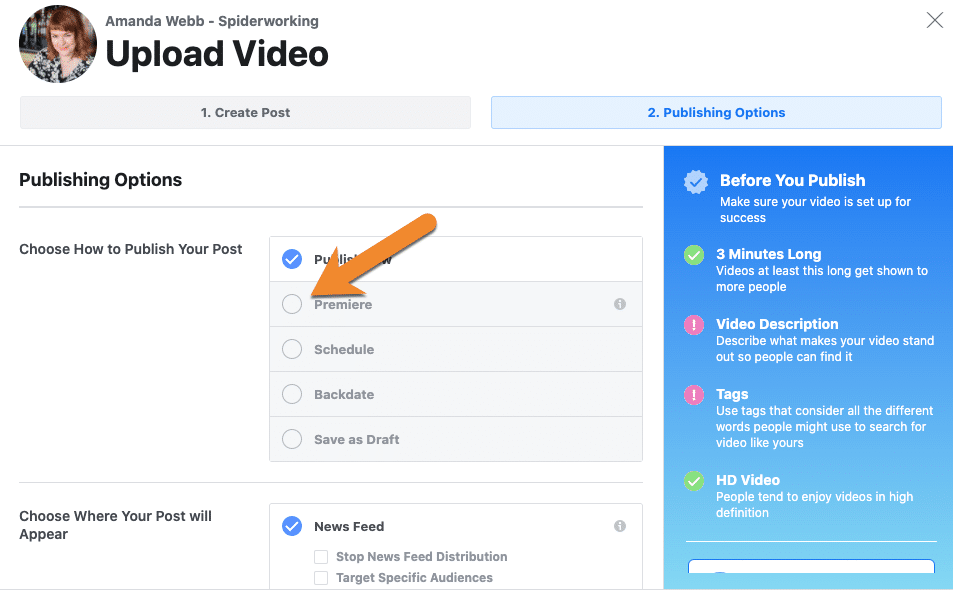 Live and pre-recorded videos both have pros and cons, and they also do different things. 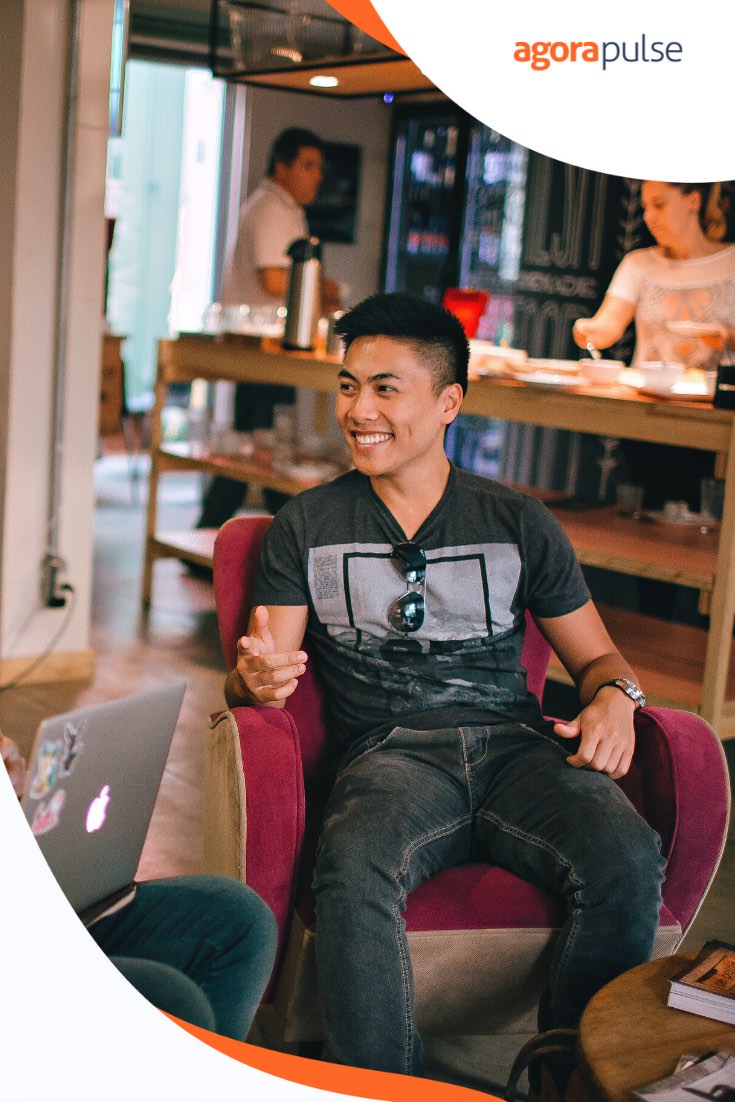