Ever ask a social media marketer to handle one of your agency’s client accounts—but the person ghosted you, leaving you with a ton of extra work and a very unhappy client?

Or perhaps you contracted a freelancer to create social media graphics for your company—but there was a huge misunderstanding about the scope. You got stuck with tons of content you didn’t need and an unexpectedly high bill to pay.

Creating a written agreement doesn’t have to be as difficult as you might think. Find out how to write a simple social media marketing contract that you can repurpose for all the freelancers and consultants your organization hires.

Why Do You Need a Social Media Marketing Agreement?

You need a social media marketing contract to avoid misunderstandings. With a signed agreement, you can ensure that everyone knows their role, the timeline, their required contribution, and the costs involved.

In more serious cases, you may also need a social media agreement for legal reasons. If you create a legally binding contract, then it can provide recourse and help you recover any losses.

What Is a Social Media Marketing Contract?

As a CMO or an agency owner, you’ll likely represent the client side of the agreement.

In contrast, the contractor is the person or organization executing the work. The contractor may be an individual consultant or freelancer—or an agency that plans to assign the work to its internal team. As an agency owner, you may represent the contractor side of the agreement in some cases.

Both parties sign the contract to confirm that they agree to the terms. Once the contract is signed, it takes effect either immediately or on the specified start date.

A social media marketing contract can protect all parties.

Let’s take a closer look at some of the ways you can benefit from creating a written agreement.

Social media marketing plans can be incredibly complex, with lots of moving parts. It isn’t easy to keep track of who’s responsible for every single aspect of a social media marketing campaign—especially when it includes everything from social media content calendars and creative production to influencer management and campaign execution.

Fortunately, a social media marketing contract clarifies the entire scope of the agreement. It states all the deliverables and responsibilities. It also confirms which party is accountable for each element.

Once everyone has signed and agreed to a social media contract, it becomes a handy reference guide when you need to double-check who’s in charge of what.

Before you sign this type of document, it’s a good idea to review the scope of the agreement. If a responsibility is incorrect or if a deliverable is missing, ask for a clarification or revision to the contract.

Whether you’re planning a single campaign or a monthly management agreement, timelines can also be difficult to juggle. When are the drafts due? Will your team have enough time to review and approve assets before publication? Have you planned enough time for production delays?

A solid social media marketing contract outlines the full timeline for the project. It includes due dates for drafts, edits, and final versions. It might also include dates for major project milestones or campaign reports. For ongoing retainers, the timeline might recycle every month.

With the project timeline in hand, you can make sure everyone has the same dates on their calendar. That way, contractors can avoid missing delivery dates. At the same time, clients can avoid requesting deliverables at random times or on an unreasonable schedule.

Like deliverables and timelines, costs for marketing projects can get complicated. Costs can climb particularly quickly when contractors charge hourly rates or when clients request additional services outside of the scope of the original project.

A comprehensive social media marketing agreement states the full cost of the project. In some cases, it may also include a line-by-line breakdown to clarify the costs of individual services or deliverables. When it’s time to invoice, there won’t be any surprises.

Whether you’re the contractor or the client, it’s also helpful to clarify the cost for additional services. For example, a contract might state that the contractor can provide extra social media services for a specific hourly rate. The more detail the agreement includes, the more misunderstandings you can avoid.

Establishing the ownership of marketing content can be tricky. It’s easy for contractors to assume that they own the intellectual property (IP) rights to the content they’ve written or the creative assets they’ve produced. After all, they’re the creators.

At the same time, it’s easy for clients to assume that they own the IP or copyright to the content they publish on their marketing channels. After all, they’ve paid for the content.

To avoid confusion, social media marketing contracts often clarify who owns any IP produced over the course of the project. If the contractor transfers copyright to the client, the agreement may also confirm when the transfer happens.

Either way, social media contracts typically include circumstances for terminating the agreement outside of the project timeline. When both parties understand when they’re able to end the agreement and how much advance notice they have to provide, everyone can feel more confident about the project and the partnership.

Ideally, both contractors and clients carry out their part of a marketing project. After all, no one wants difficult clients or contractors. Yet disputes can still arise, even after careful planning.

In the event that either party needs to pursue legal action, a written agreement outlines how and where to resolve the dispute.

For example, it might require that the parties resolve disputes through mediation or arbitration. In the event that legal proceedings are necessary, the agreement also identifies the jurisdiction for the agreement.

Always list the two parties involved in the contract: the contractor and the client. Make sure to use the legal name for each party and clarify the role of each.

Next, outline when the project starts and ends. Begin by stating the proposed start date. Depending on the terms of the contract, it might be a specific date or a certain amount of time after initial conditions are met.

Make sure to define when the project ends. For one-time projects, the contract might list a specific date. For a retainer, the agreement might specify a certain number of weeks or months. If there’s no set end date, make sure to clarify that the agreement is ongoing.

Then define the scope of work. It’s helpful to begin by stating what the project is. For example, it might be a paid campaign or organic social media management. Then discuss the services that the contractor will provide or the deliverables they’ll produce.

Aim to be as specific as possible. For example, if the contractor will be publishing social media posts, state the channels and the number of posts per day, week, or month. If you’ve discussed even more specifics—such as post formats or scheduling—list those details too.

Remember that the scope of work doesn’t have to focus completely on what the contractor will deliver. If the client is also responsible for contributing information or source material, include it in the scope. For example, the client may need to provide data or creative assets.

Next, outline the timeline for the project. Clarify key dates for the project—such as delivery dates for drafts and deadlines for final versions. If certain parties have time limits for taking action—such as requesting edits—specify those details here. Throughout the timeline, always specify which party is responsible for meeting each deadline or milestone date.

Then list the fees for the project. Make sure to specify whether the client has to pay the fee once or if it’s a recurring weekly or monthly fee. It’s also important to clarify if the client is responsible for paying a deposit—such as 50%—at the start of the project.

A social media marketing contract should also specify the payment terms. For example, the payment may be due 30 days from receipt. If the client is responsible for paying late fees, clarify the amount and the timing.

In some cases, the parties may need to maintain confidentiality and refrain from publicly discussing some aspect of the work. If one or both parties require confidentiality, the agreement should specify the exact information that should remain private.

In other cases, one of the parties may require a non-disclosure agreement. This is typically a separate contract. However, signing it may be required before beginning the project.

Then state how either party should provide notice. For example, the contract may require a written notice via email or text.

In some cases, a project termination could result in incomplete work. The agreement should discuss the intended outcome for the work. For example, if the contracted social media manager has produced only half of the required posts, does the client take ownership?

The agreement should also mention whether the contract automatically terminates under certain conditions. For example, if the contractor misses a key deadline by more than a week or if the client fails to pay the invoice by the due date, the agreement may end.

In the event that a contract-related issue arises, the agreement should outline the process for dispute resolution. It should discuss the steps that the parties will take to resolve a dispute. In case legal proceedings become necessary, the contract should also state the jurisdiction.

Situations That Call for a Social Media Contract

Are you thinking about skipping the paperwork to save yourself some time and hassle? Here are a few situations that illustrate situations where you should definitely write up a social media marketing contract.

One-off social media campaigns always call for a contract—whether you’re planning to use organic, paid, or both types of channels. If social ads are part of the mix, make sure to state the total ad spend, even though the advertiser should pay it directly to the ad platform.

Always write up agreements for monthly retainers, even if you intend for them to be ongoing. Whether your retainer agreement includes a firm end date, make sure it clarifies how and when either party can end the contract when the time comes.

Whether you’re hiring a consultant for a certain project or for a preset number of hours, it’s important to get the agreement in writing. The scope is likely to be particularly important in this situation. Make sure it states whether calls and emails are included in the project cost or whether they’re charged at an hourly rate.

When you hire an influencer marketing manager, you need a contract to outline the included services and deliverables. Make sure you also outline the process for vetting and contracting influencers to represent your brand.

Partnering with a single influencer also calls for a contract. Be sure to clarify the type of content the influencer will create, where it will be published, and the timeline for the project. If you’re planning to include a giveaway, clarify the terms and the number of items or total value as well.

When you hire a creator to produce photos, videos, or graphics for your social media marketing campaigns, you need a contract. It’s a good idea to specify the number of deliverables the creator will deliver and clarify the terms of the copyright transfer.

What We Learned About Social Media Marketing Contracts

Now that you know how to make a social media marketing contract for a client or contractor—and why it’s so important to get everything in writing—you can start outlining an agreement for your business or agency. Consider working with a legal advisor to write contract templates that you can repurpose for each contractor, freelancer, or agency you hire. 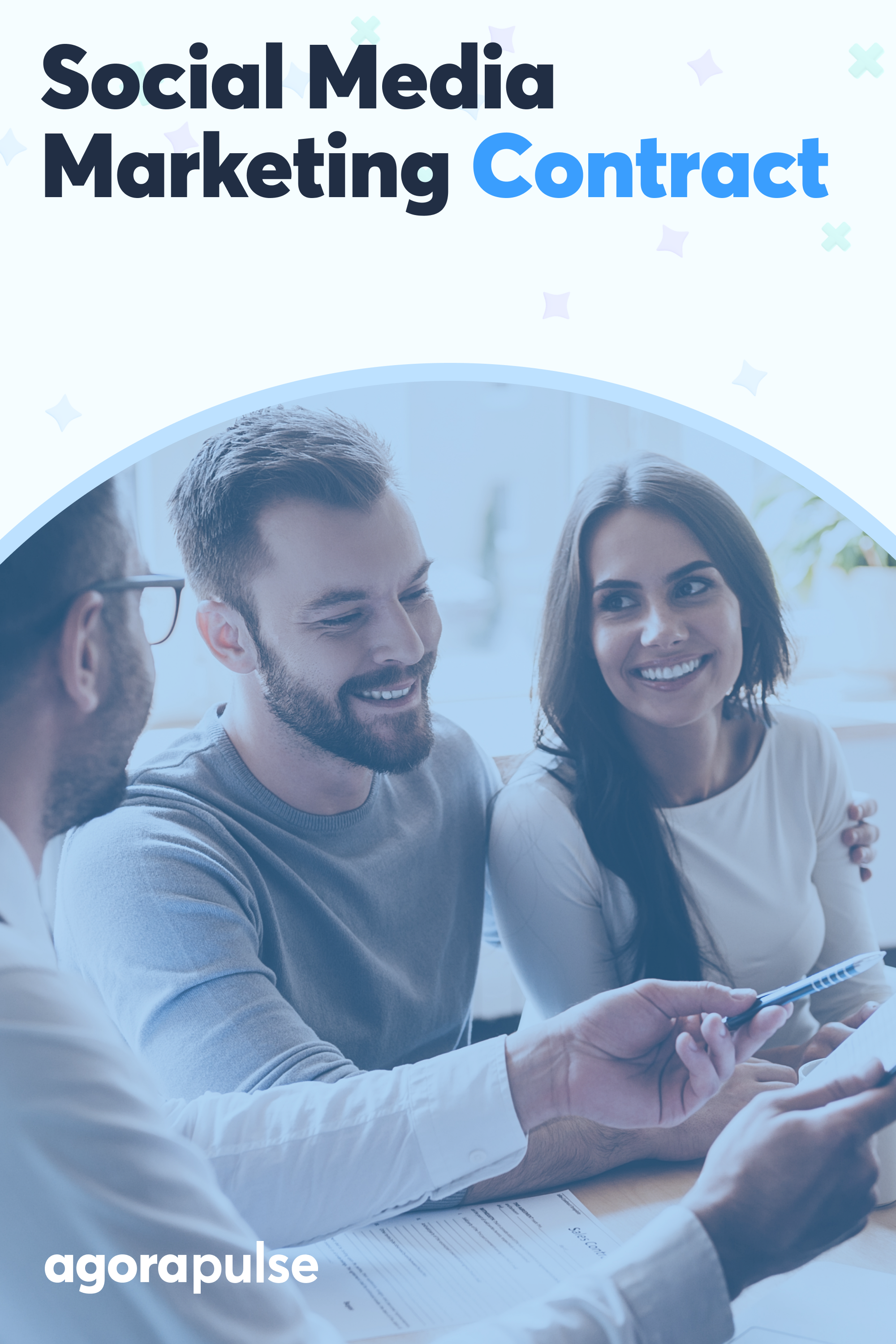 Social Media Manager Salary: How Much Should You Be Making?